IOWA CITY, Iowa — On the road against one of the best defenses in America, 10th-ranked Penn State won the turnover battle and converted on third downs to survive yet another tough trip to Iowa.

Noah Cain ran for a 5-yard touchdown with 5:17 left and Penn State held off the 17th-ranked Hawkeyes 17-12 on Saturday night, its first win over a ranked opponent this season.

“This is a team. You’re going to have to earn it,” Penn State coach James Franklin said about the Hawkeyes. “The defense has been great all year. We leaned on them heavily.”

A matchup between two of the nation’s top defenses turned when Iowa’s Nate Stanley threw an interception near midfield with 9:22 remaining. Penn State drove 35 yards on a gassed Iowa defense, and the last of three straight runs by Cain made it 17-6.

The Nittany Lions gained just 294 yards. But they were 10 of 19 on third downs against a defense ranked fourth in scoring defense entering play, and they scored 10 points off of two Iowa miscues.

“We grinded it out,” Franklin said.

Iowa pulled within 17-12 when Stanley found Brandon Smith for a 33-yard TD pass with 2:31 to go. The Hawkeyes’ two-point try failed though, and Cain converted a crucial third down that ensured that Iowa never saw the ball again.

Up 7-6 late in the third quarter, Penn State recovered a fumble at Iowa’s 16 and Sean Clifford connected on an apparent touchdown pass to Pat Freiermuth that was overturned on review. Iowa then held the Nittany Lions at the 1-foot line, and two straight holding calls forced them to settle for a 33-yard field goal.

KJ Hamler caught seven passes, including a 22-yarder for a TD, for Penn State.

Stanley threw for 286 yards, but the Hawkeyes ran for just 70 yards on 30 attempts. 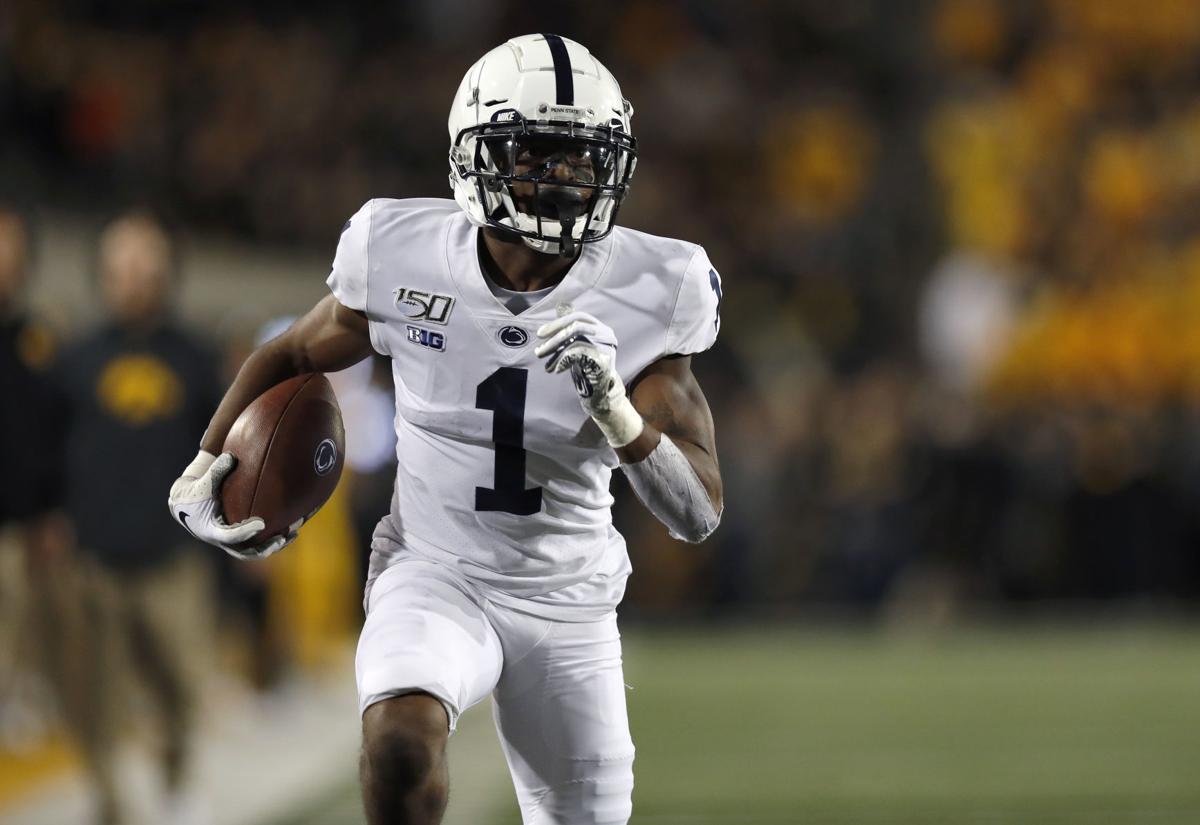 Penn State wide receiver KJ Hamler runs the ball in for a touchdown during the first half of the team's NCAA college football game against Iowa on Saturday, Oct. 12, 2019, in Iowa City, Iowa. 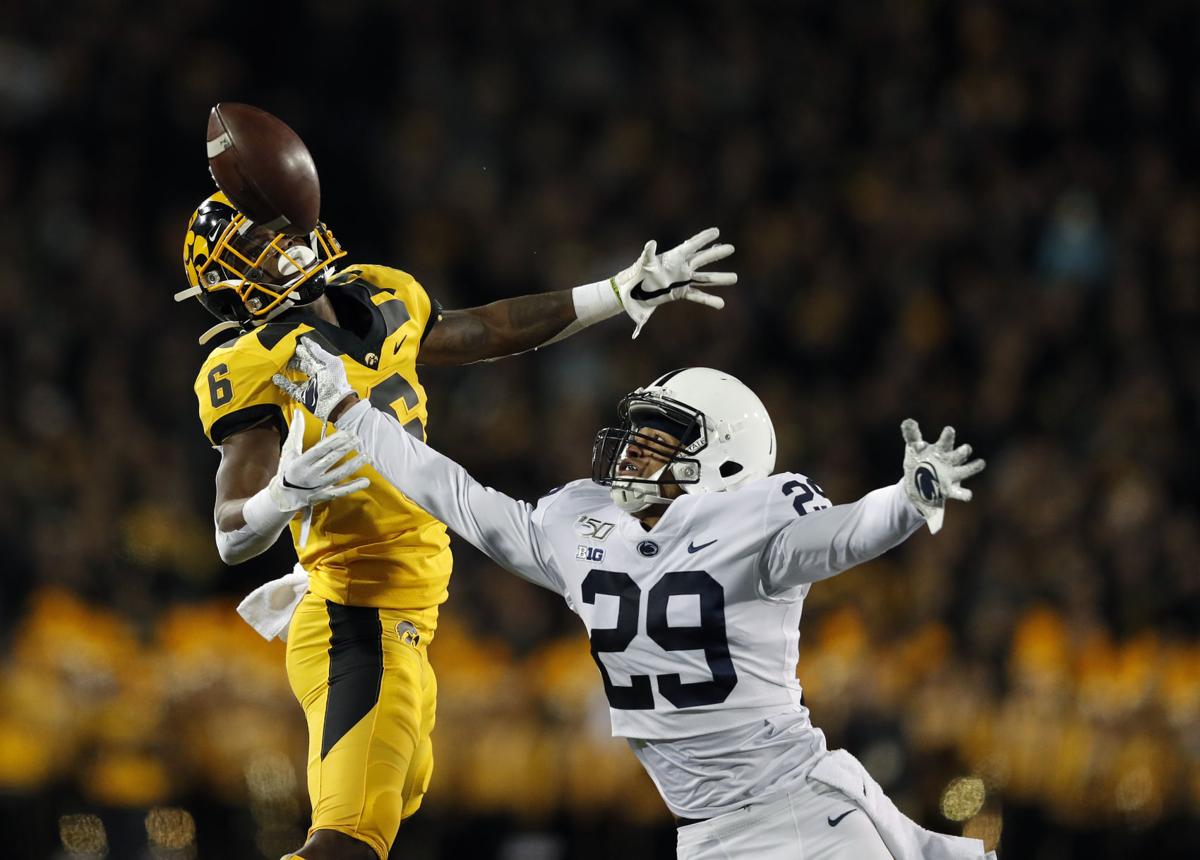 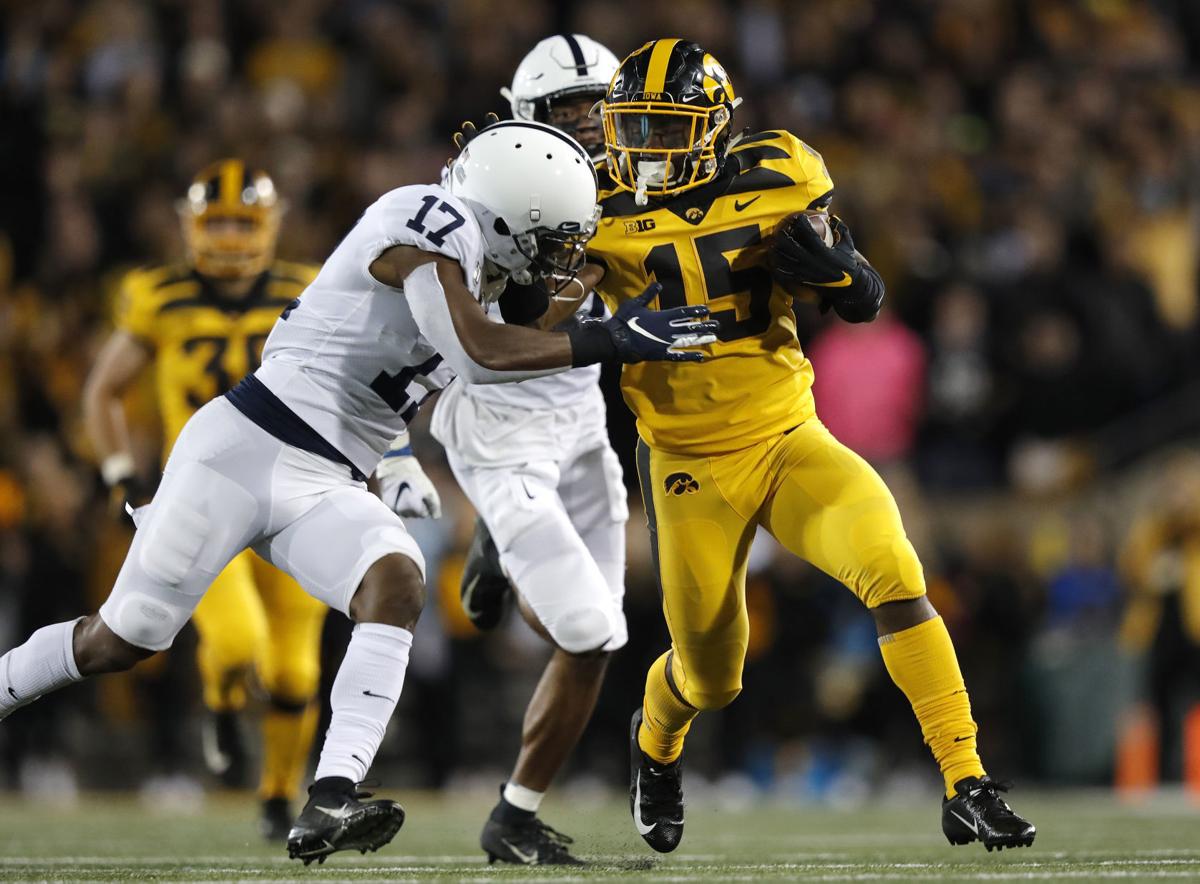 Iowa running back Tyler Goodson, right, runs the ball as he tries to fend off Penn State safety Garrett Taylor, left, during the first half of an NCAA college football game Saturday, Oct. 12, 2019, in Iowa City, Iowa. 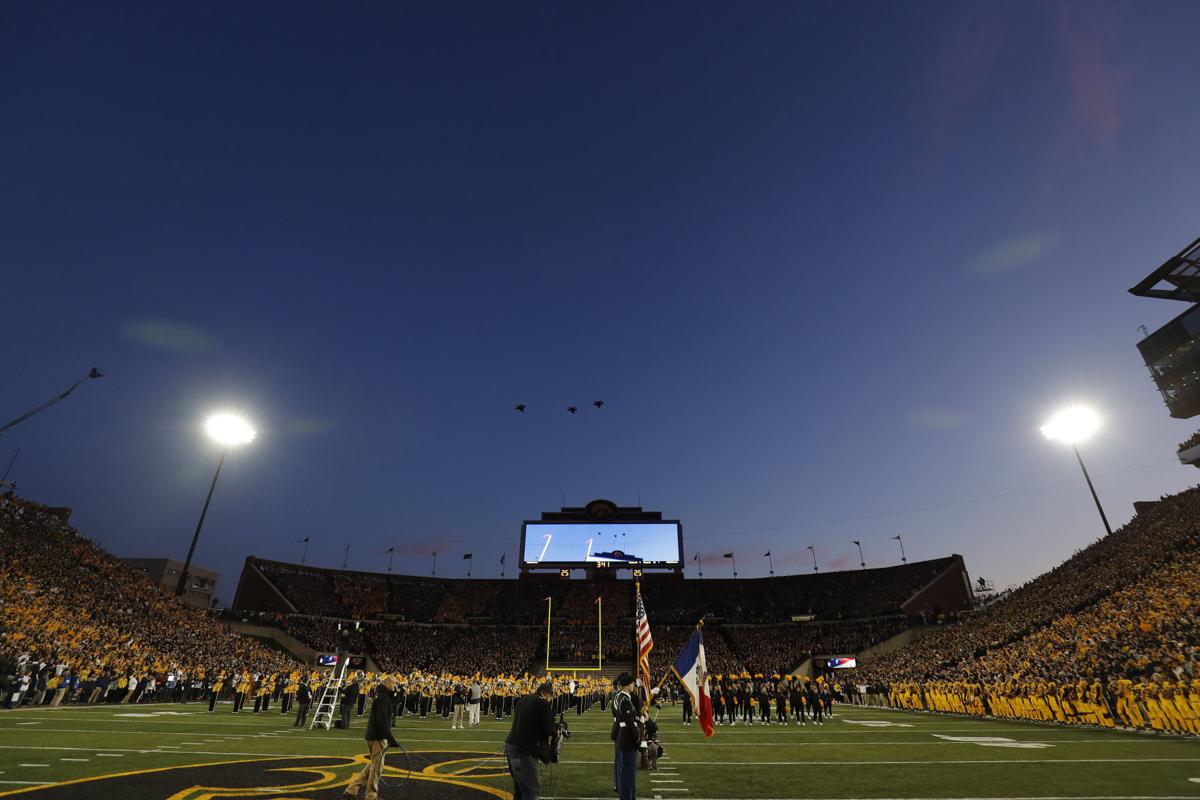 Fans watch a flyover at Kinnick Stadium as the national anthem is performed before an NCAA college football game between Iowa and Penn State, Saturday, Oct. 12, 2019, in Iowa City, Iowa. 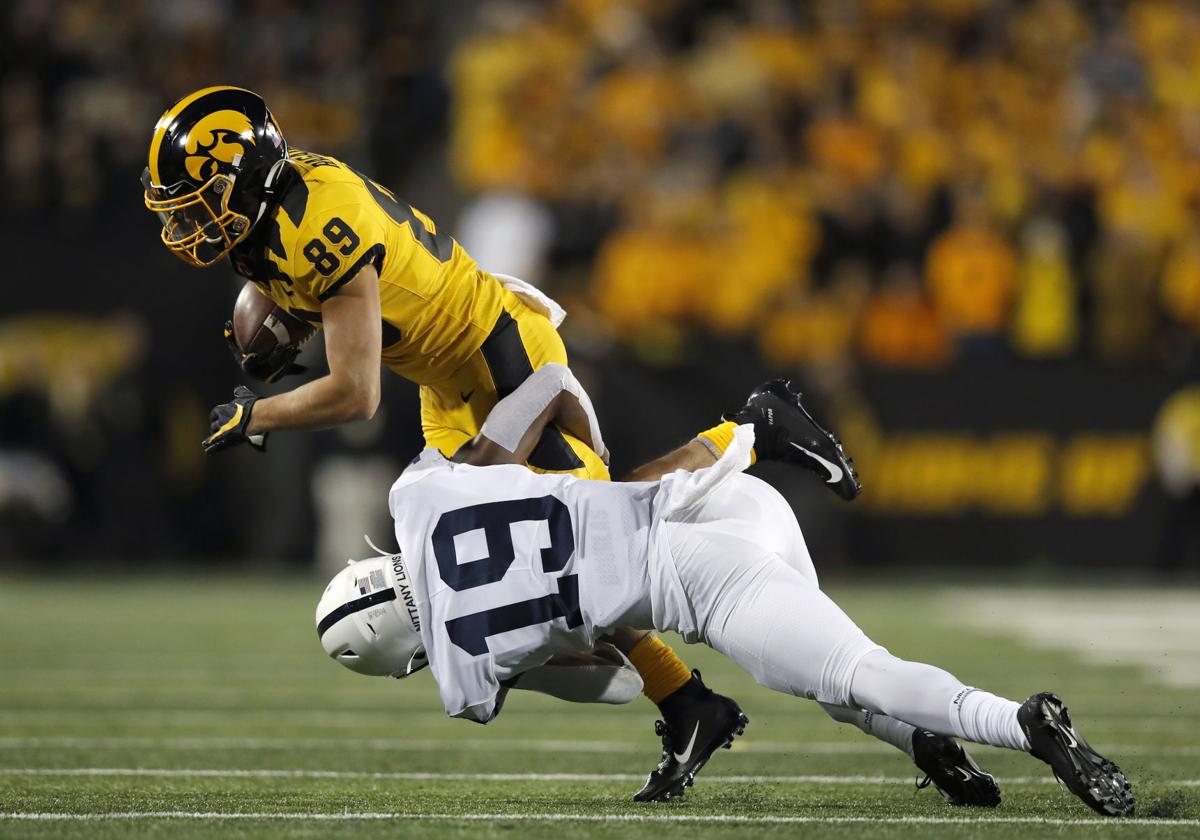 Iowa wide receiver Nico Ragaini, left, runs the ball as he tries to get free from Penn State cornerback Trent Gordon during the first half of an NCAA college football game Saturday, Oct. 12, 2019, in Iowa City, Iowa. 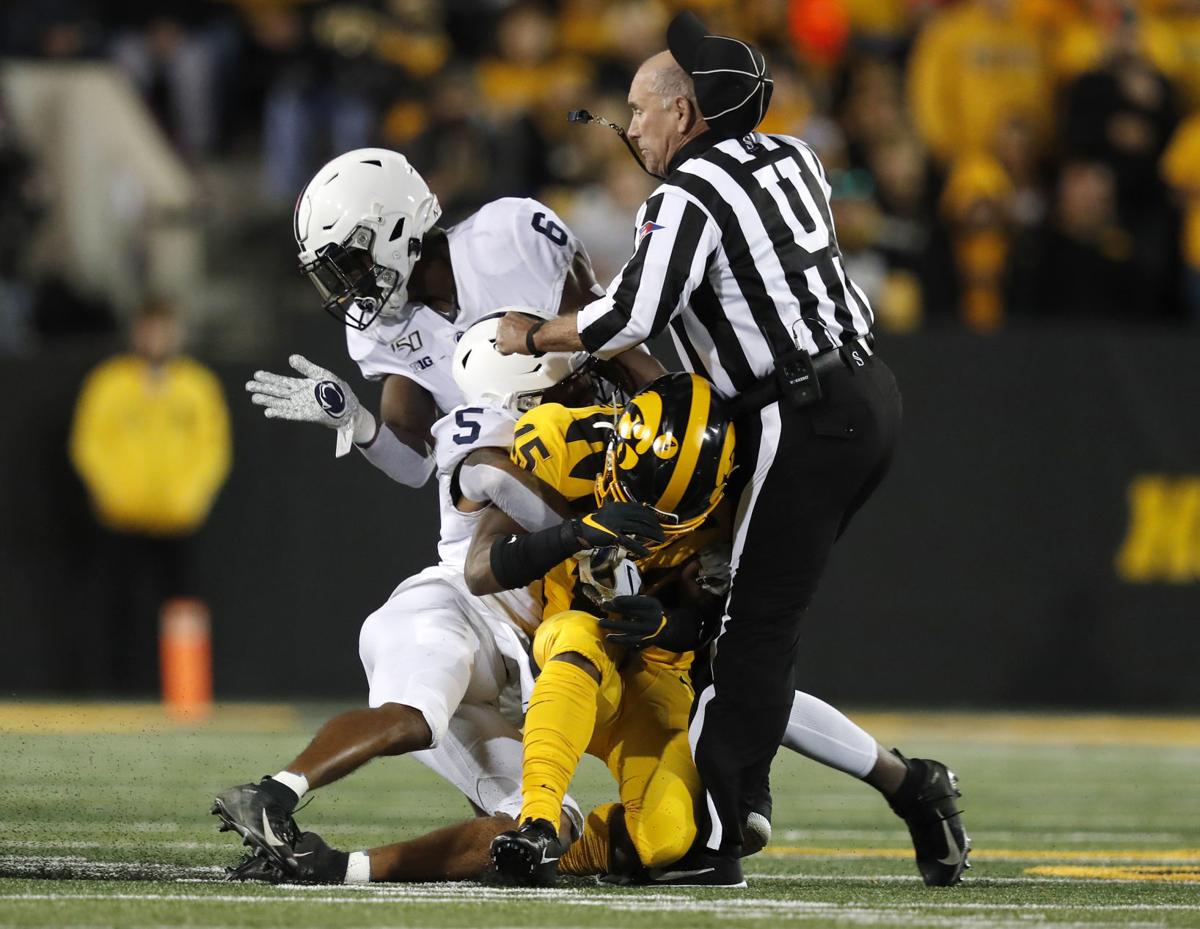 Penn State cornerback Tariq Castro-Fields, left, tackles Iowa running back Tyler Goodson, center, causing an official to be knocked to the ground during the first half of an NCAA college football game Saturday, Oct. 12, 2019, in Iowa City, Iowa. 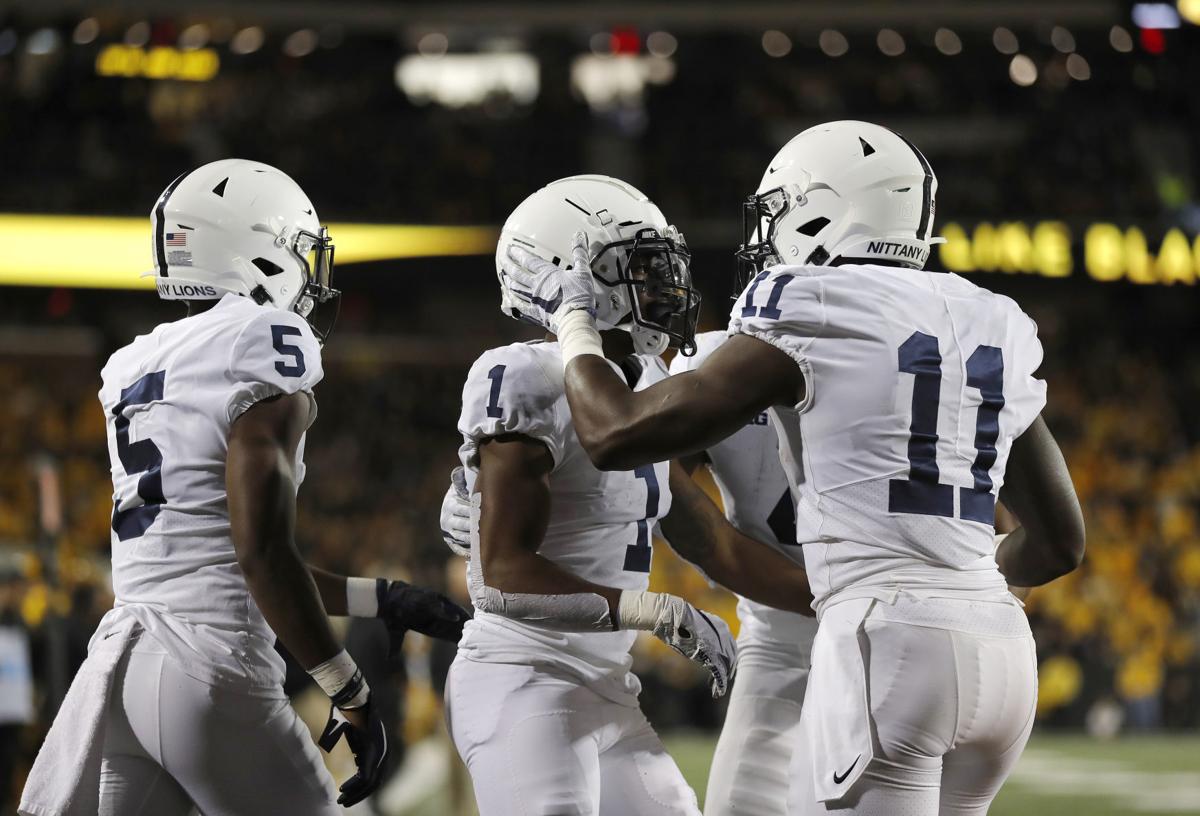 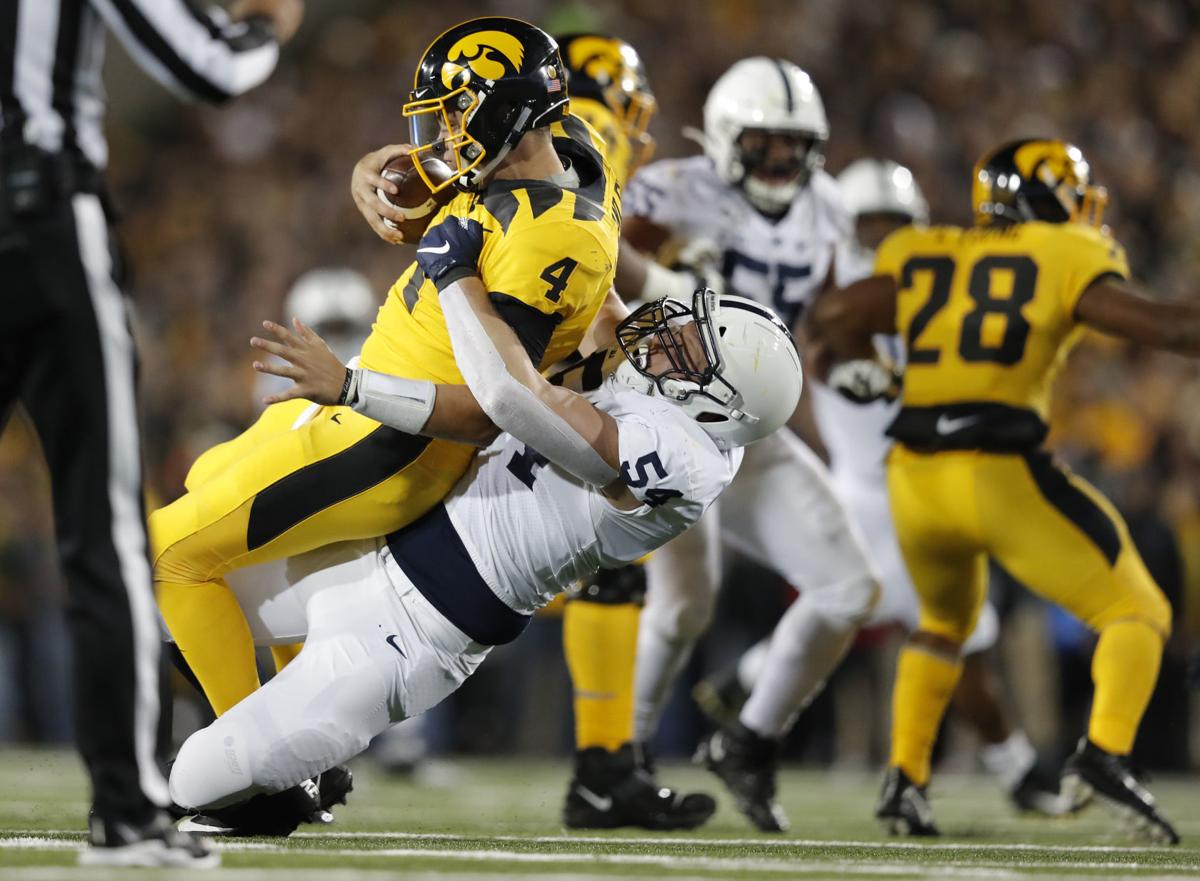 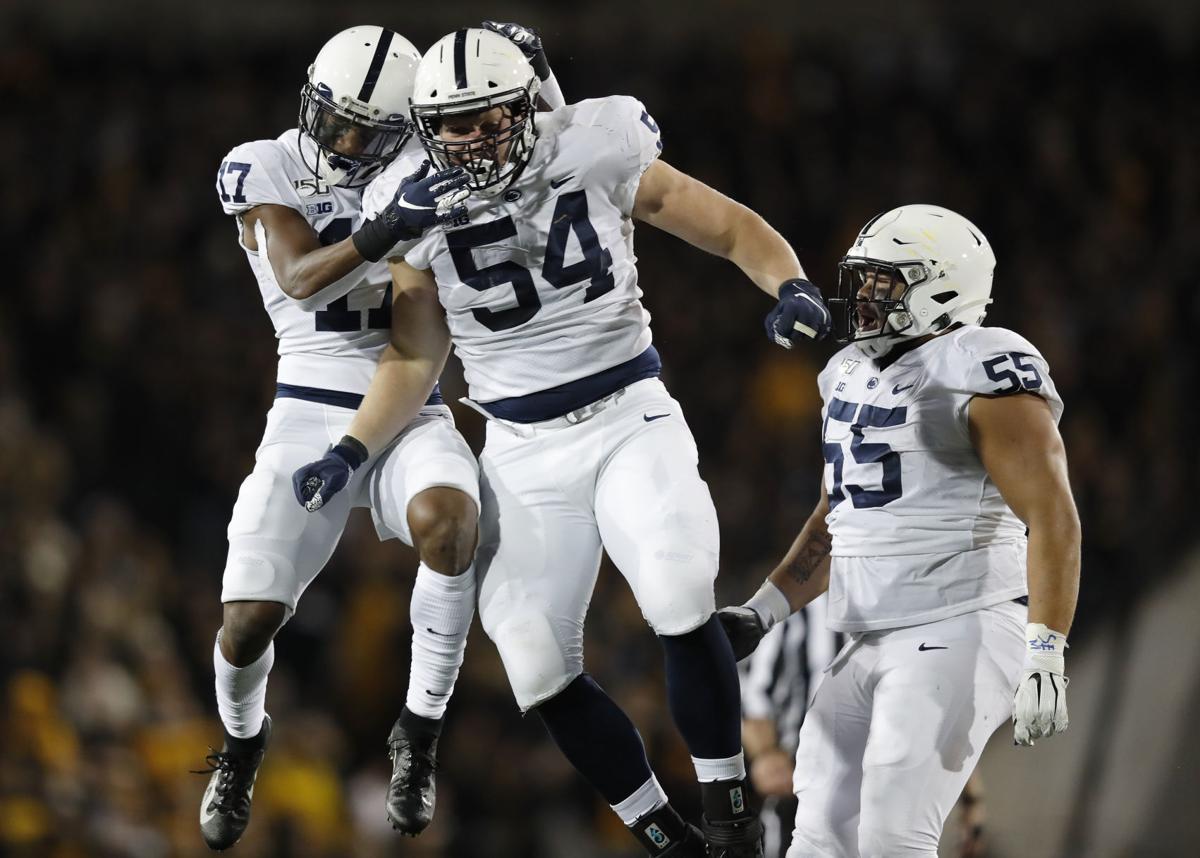 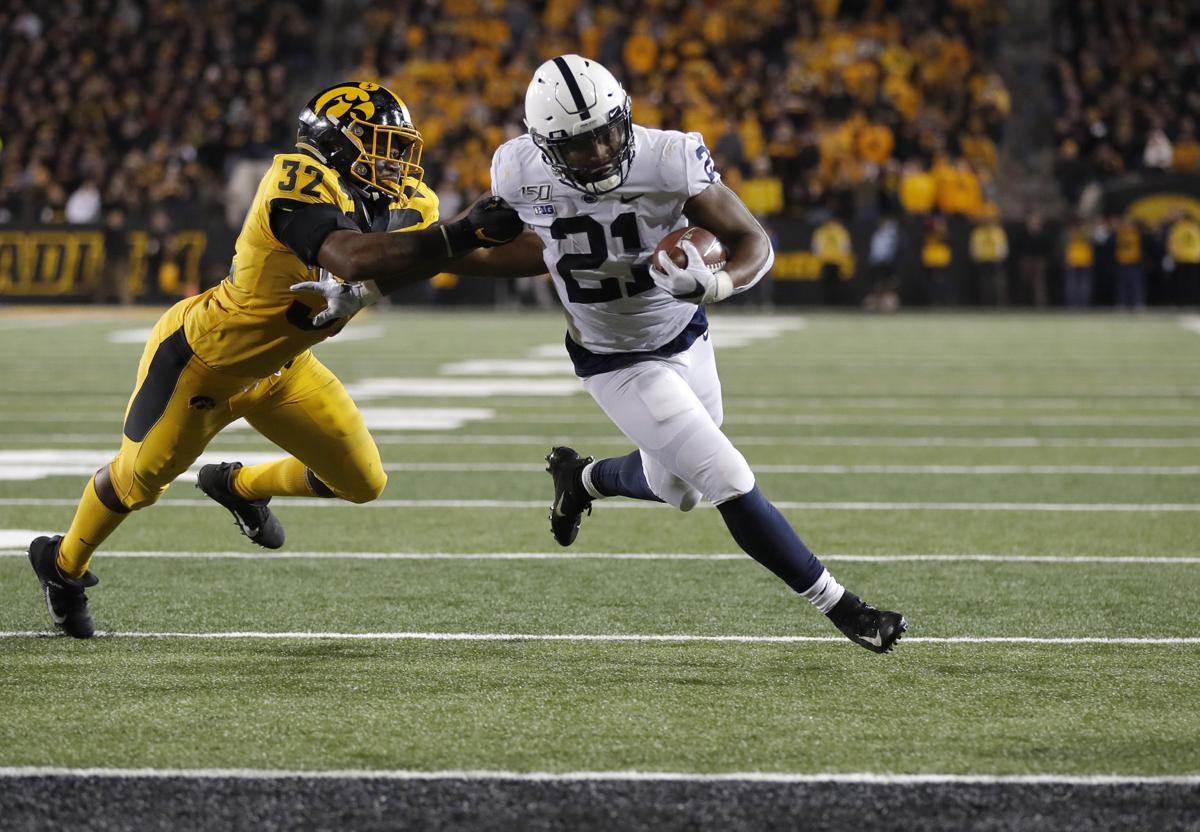 Iowa linebacker Djimon Colbert, left, loses his grasp of Penn State running back Noah Cain as Cain runs in for a touchdown during the second half Saturday in Iowa City, Iowa. 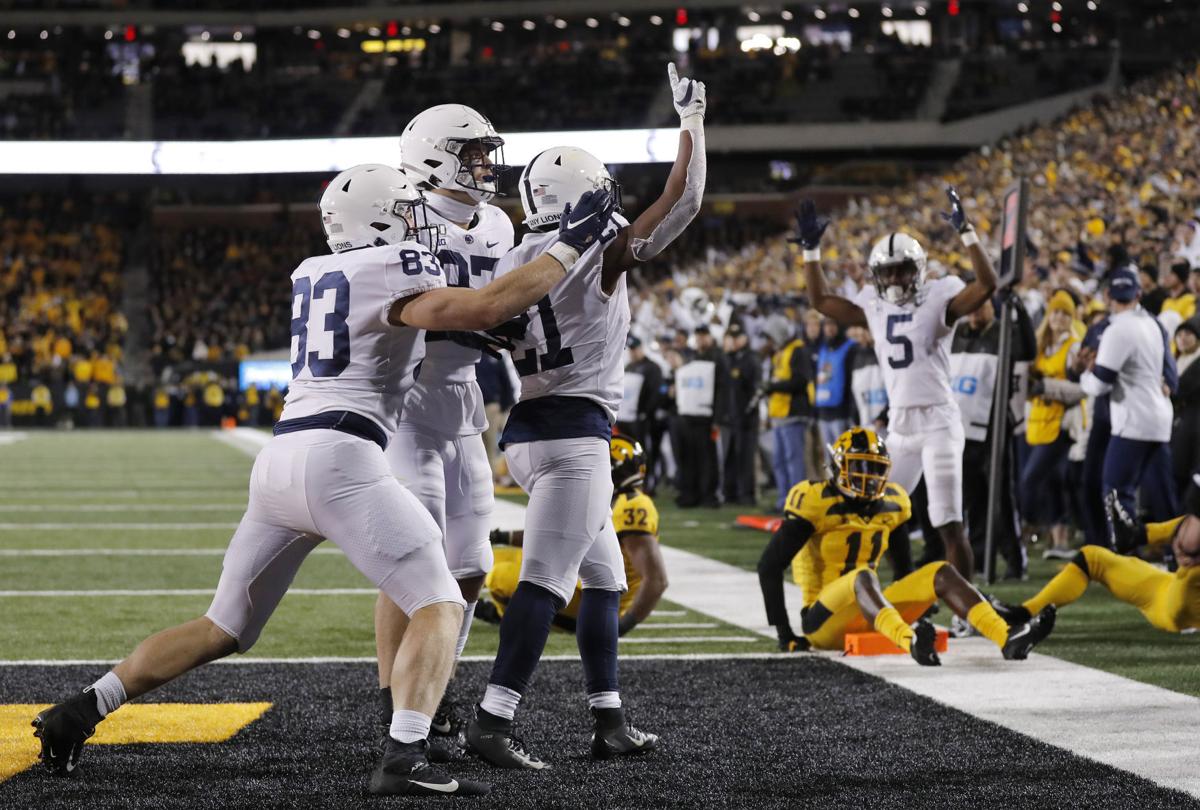 Penn State running back Noah Cain, center, celebrates his touchdown during the second half of the team's NCAA college football game against Iowa on Saturday, Oct. 12, 2019, in Iowa City, Iowa.

Penn State: The Nittany Lions survived their toughest road challenge outside of a trip to Ohio State on Nov. 23. Penn State was on the road against a talented team with a jacked-up crowd, and yet the Nittany Lions were the ones making the plays that made the difference.

Iowa: The Hawkeyes nearly went back-to-back games without a touchdown. Granted, Michigan and Penn State are really good on defense. But Iowa can’t continue to lean on its own defense to keep it in games. At 1-2 in the league and with Wisconsin looking like one of the best teams in America, the Big Ten West doesn’t look so winnable anymore. “We’ve just ended up shooting ourselves in the foot,” Stanley said.

Penn State was facing a third-and-10 at Iowa’s 35 after Stanley’s interception. But Clifford broke right on an option, kept it, burst through a hole and gained 11 yards to extend what proved to be the game’s winning drive. “He didn’t necessarily play his best game. But he was gutsy,” Franklin said. “That was a big-time play.”

Clifford was 12 of 24 for 117 yards, snapping his streak of five straight games with at least 200 yards passing. ... Freshman Tyler Goodson led Iowa with 35 yards rushing, though he lost a fumble that won’t help his chances of winning the starting job. But starter Mekhi Sargent had just 18 yards on nine tries. ... Penn State punter Blake Gillikin placed five of his seven kicks inside Iowa’s 20-yard line. ... Iowa, which at one point this season went three games without a turnover, fumbled three times and lost one. ... Penn State has 52 points off of turnovers through six games.

Penn State might move up a few spots. Iowa might struggle to hang onto its spot in the Top 25 after back-to-back losses.

Notebook: James Franklin doesn't back down, Penn State is sticking with running back committee

Sometimes, James Franklin said, he feels he should just have a recorded statement.