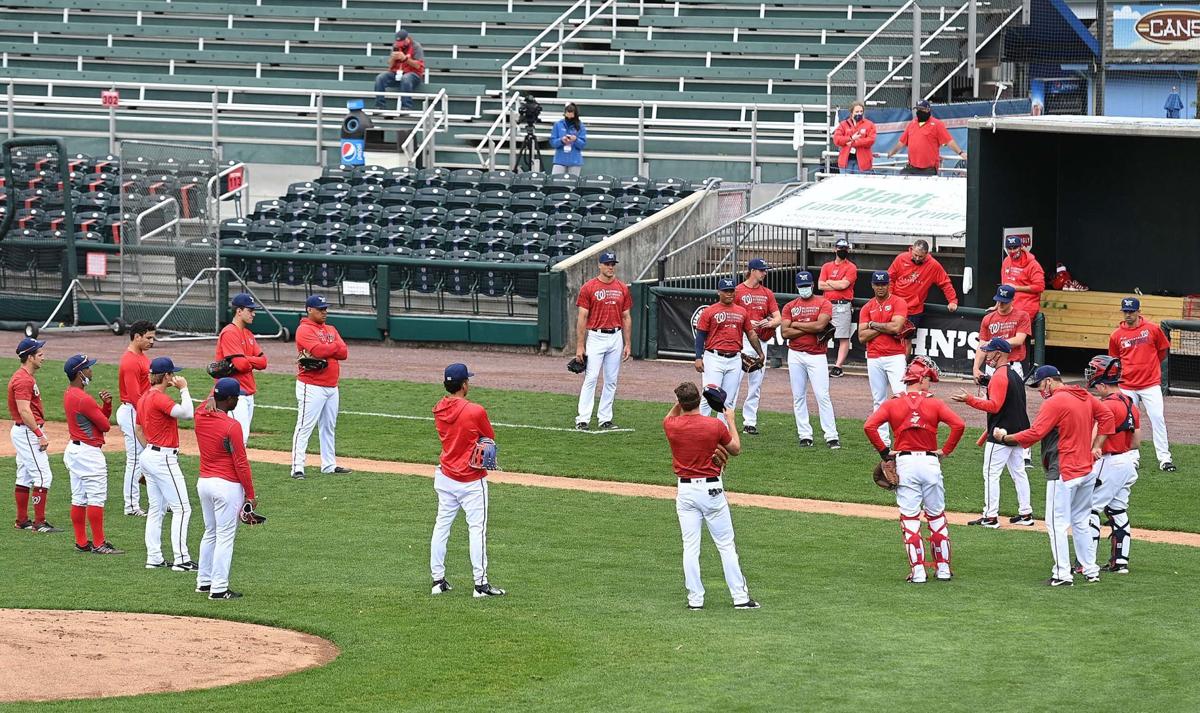 Players and coaches work on plays during the Harrisburg Senators' last practice before the start of the 2021 minor league baseball season. 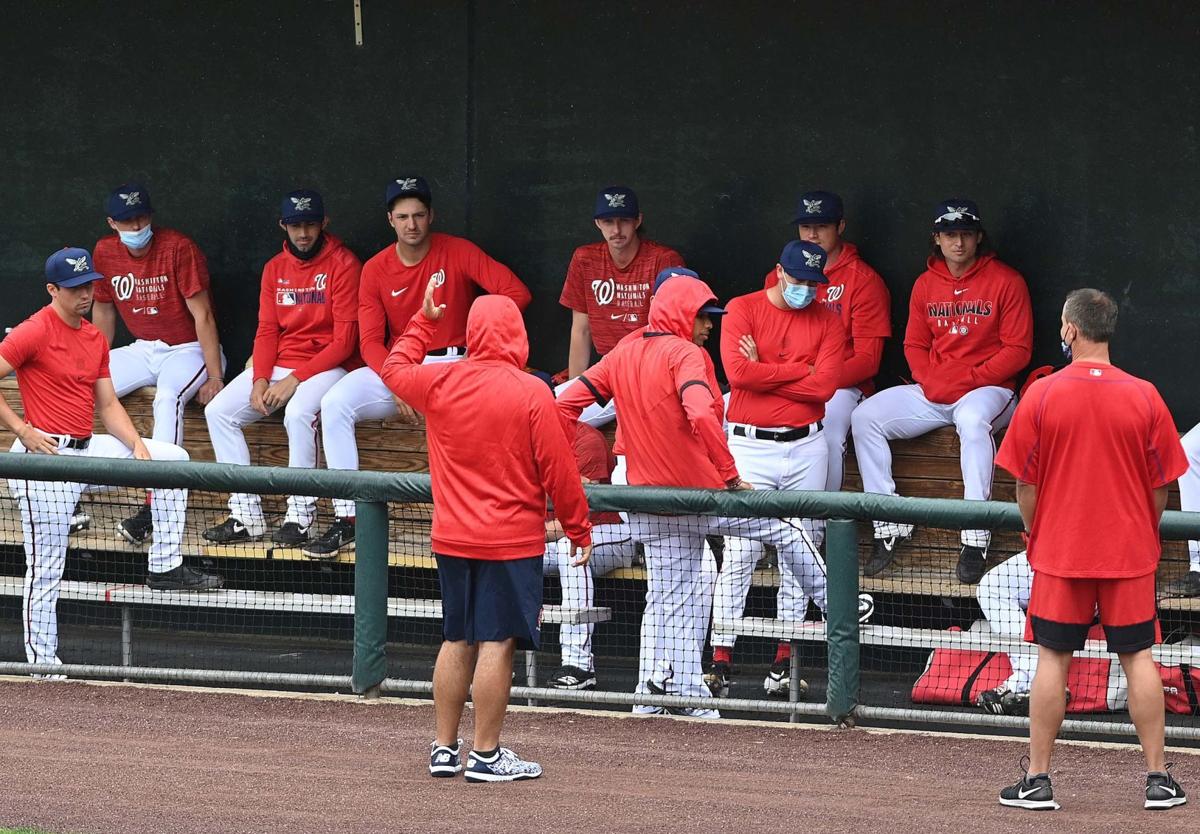 Players gather in the dugout as rain falls during the Harrisburg Senators' last practice before the start of the 2021 minor league baseball season. 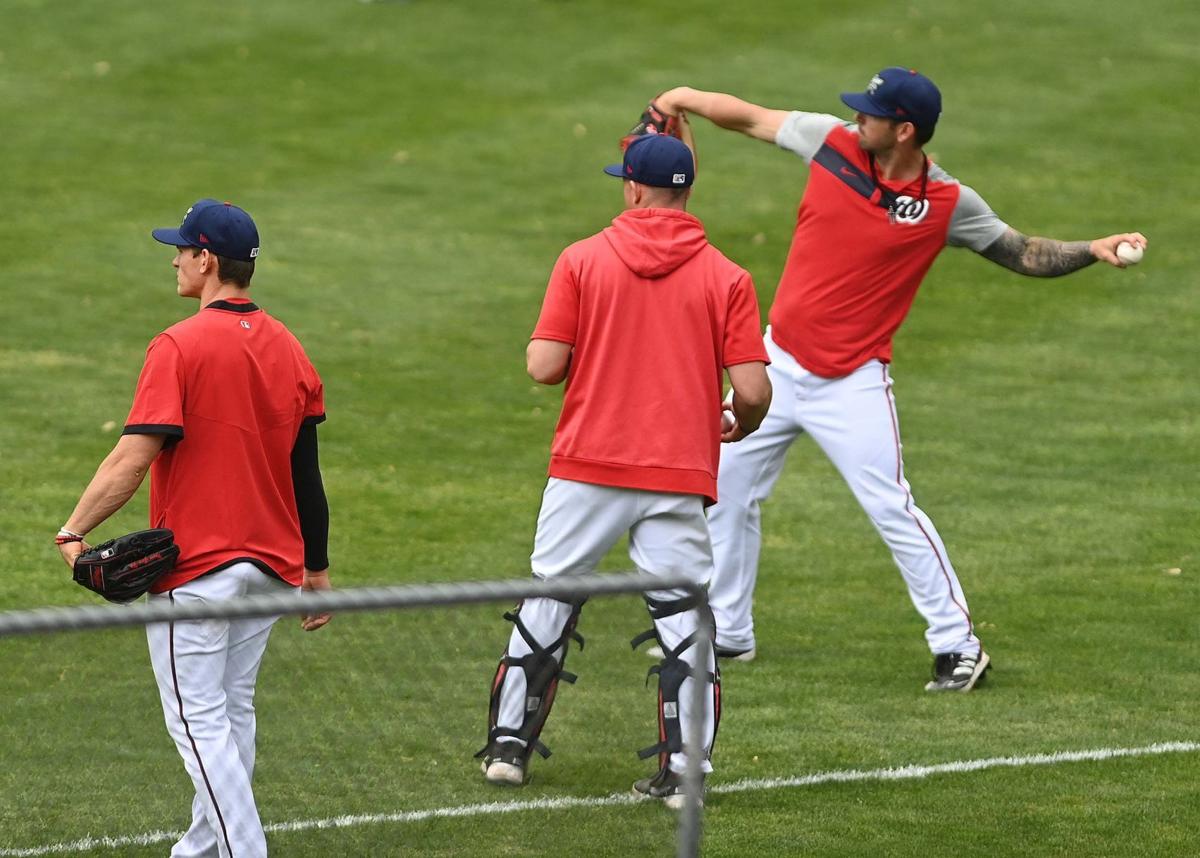 Mick Reinhard For The Sentinel

That’s how long it has been since the Harrisburg Senators have played a game that counts.

On Tuesday night, the Senators will take the field in Somerset, N.J., for the first game of the 2021 minor league baseball season. Opening day will mark a welcome return of minor league baseball after a prolonged absence due to the COVID-19 pandemic. One week later, the team will play its home opener at FNB Field when it hosts the Richmond Flying Squirrels.

In one way, it marks the gradual return to normalcy as vaccinations increase and infection rates drop both locally and nationally in some places. But protocols are still in place and will continue to affect Harrisburg’s schedule, players and the fan experience on City Island this upcoming season.

Starting a month later than usual, the Senators will play only a 120-game schedule, 20 less than usual, with no playoffs planned at this time. Every series will be six games long and run Tuesday through Sunday each week against the same opponent to reduce scheduled travel mileage and expenses.

Players will work and live in a bubble sequestered from contact with the general public. Among the restrictions will be staggering the times in the clubhouse to limit the number of people in indoor spaces and constricting the dugout to only players and staff likely to participate in that day’s game.

Host families, long a staple of the minor leagues, are not allowed this season. On the road, players will be confined to the hotel except for team functions and low-risk outdoor activities.

Here are some of the other changes:

At the ballpark, a buffer zone will be around the dugouts and bullpens to insulate the players. The lower concourse behind the teams’ clubhouses will also be off-limits this year, utilizing a controlled, outdoor space for the players and umpires. Additionally, the restrictions limit the front office from having the usual pre-game and in-game activities on the field.

That separation also means the end of getting autographs from your favorite player. Other differences at FNB Field include tickets sold in pods of two, three, four or six to adhere to the social distance restrictions while limiting the capacity to Gov. Tom Wolf’s current 50% mandate for outdoor events.

“I think it’s important for our fans to know that while they’ll be some changes to abide by the health and safety precautions of Pennsylvania and Major League Baseball, we’re still going to provide what fans come to expect from us,” Senators’ team president Kevin Kulp said. “The Kids’ Zone won’t have the inflatables, but we’re going to create an activity zone with coordinated activities at different parts of the game. We want to provide a sense of normalcy as much as possible, even though it will feel slightly different. It should hopefully feel distanced, controlled and safe.”

“We made a decision early on that even though we’ll have a reduced capacity, we were not going to change what we did for the giveaways the fans have come to expect or the fireworks’ nights. For us, it was about getting back to normal and being back.”

But coronavirus restrictions won’t be the only changes this season. As part of the “One Baseball” initiative, Major League Baseball commandeered and reorganized the entire minor league system.

Gone are the league names and structure that has been in place for decades or even more than 100 years in some cases.

The Eastern League, formed in 1923 and what Harrisburg has been a part of since their return in 1987, is no longer. Say hello to the Northeast Double-A League instead. Or at least that’s what it’s called until MLB possibly sells the naming rights.

Part of the reorganization was 42 communities losing affiliated teams to reduce the total number of minor league teams to 120, four per Major League club. Rumors swirled that Binghamton, Bowie and Erie were all potentially on the chopping block, but when invitations went out, all survived the purge. Only one team out of the dozen in the league changed, and that was the New York Yankees choosing to head farther north in the Garden State with the formerly independent Somerset Patriots instead of the Trenton Thunder.

The Washington Nationals have significantly altered their minor league system. Players coming to and going from Harrisburg will head to new affiliations with the Triple-A Rochester Red Wings and High-A Wilmington (Del.) Blue Rocks. The former Potomac Nationals have a new home and stadium in Fredericksburg (Va.) as the club drops down one level to be the Low-A farm team.

Additionally, MLB will be implementing several rule changes throughout the minor leagues this season. Go to a game on City Island, and you will see the effort to limit defensive shifting in the ways infielders are positioned. All four players must be entirely on the infield dirt during the start of play, and if that change is successful, teams may be forced to have two players on either side of second base during the second half of the season.

“I’m anxious to see how that works because at spring training the umpires made us do it the last three or four days,” Harrisburg manager Tripp Keister said. “It did help in creating more opportunities offensively if you hit the ball hard.”

Who’s on the team?

As far as the team on the field goes, it will be under new leadership as Keister takes the helm from the winningest manager in Senators’ history Matt LeCroy.

Keister joined the Nationals’ organization in 2012 and has managed the Potomac Nationals for six seasons, including guiding them to a Carolina League Championship in 2014. He will be joined on the staff by new pitching coach Sam Narron, hitting coach Brian Rupp, trainer T.D. Swinford and strength and conditioning coach RJ Guyer.

The opening day roster has the typical mix of veterans and rookies to the Double-A level. Left-handed starting pitcher Tim Cate, who gets the start on Tuesday night in Somerset, is the highest-ranked prospect of the bunch — No. 8 by Baseball America. Just outside the Top 10 are infielders Drew Mendoza and Jackson Cluff, who both played a half-season at Low-A Hagerstown after getting drafted in 2019.

Ian Sagdal, Rhett Wiseman, Sterling Sharp, and Andrew Lee are four of the 14 players who return to Harrisburg to provide leadership.

“I think the biggest thing when you get on the field with Triple-A and big-league pitchers at the Alternate Training site and then fast-forward to the same thing at Spring Training, you evaluate and see where you measure up with them,” Cluff said on adjusting to Double-A. “It’s two feelings that go on. I have a lot of room to grow and still a long way to go to get to where I need to go. But at the same time, you feel a sense of accomplishment. It can give you some confidence moving forward into the season.”

The Nationals have infused talent into their organization the last two drafts that immediately rocketed to the top of their prospect lists. Right-handed power arms Cade Cavalli, Jackson Rutledge and Cole Henry all start the season in Wilmington and could quickly move through the system, spending part of the summer on City Island.

The upcoming season is full of changes, but for now baseball is back. And that’s a welcome sight for everyone that loves the game.

“For baseball people like myself, our staff and players, it is important,” Keister said. “It’s not our identity, but it’s certainly something that you grow accustomed to doing this time every year. I know for us, we really need to play.

“I hope it’s a healing part for the community.”

Hot Or Not: Justin Fields will be next rookie QB to get first career win?

Players and coaches work on plays during the Harrisburg Senators' last practice before the start of the 2021 minor league baseball season.

Players gather in the dugout as rain falls during the Harrisburg Senators' last practice before the start of the 2021 minor league baseball season.