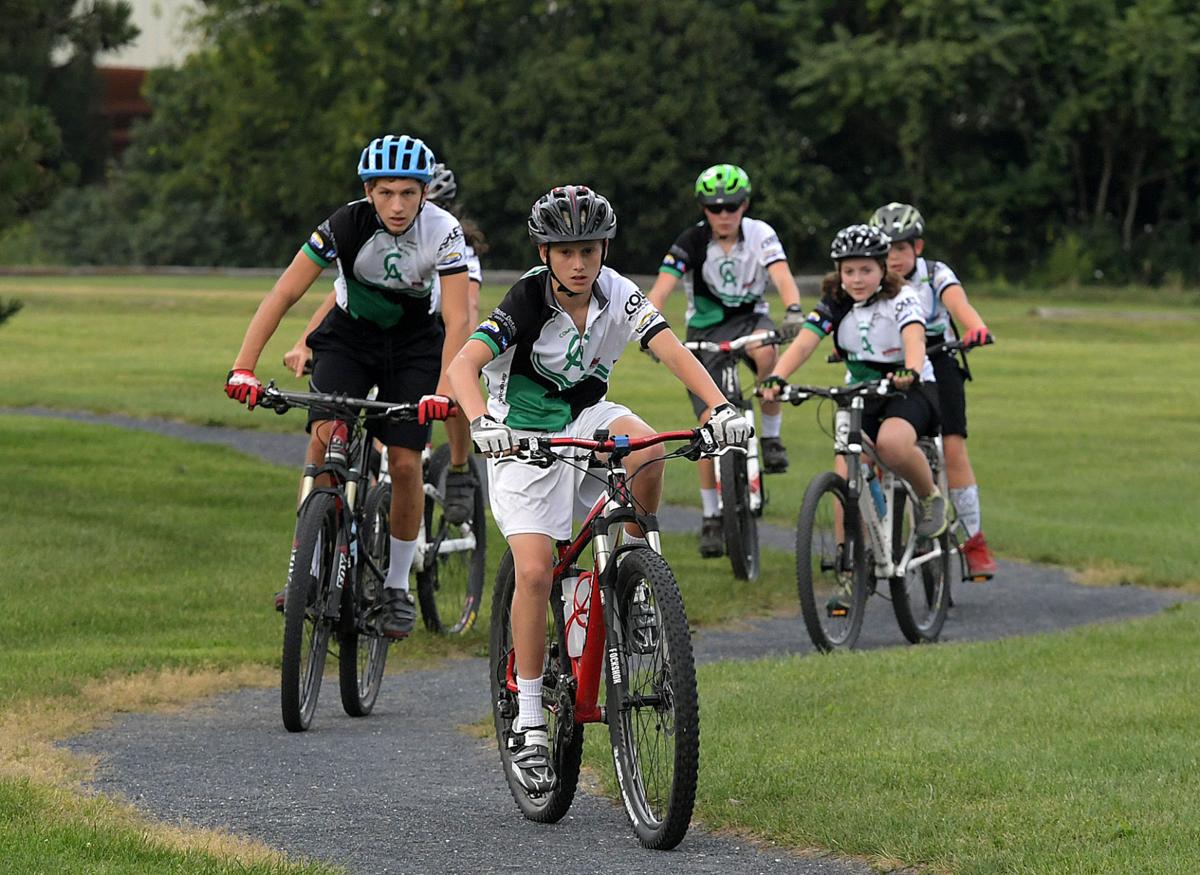 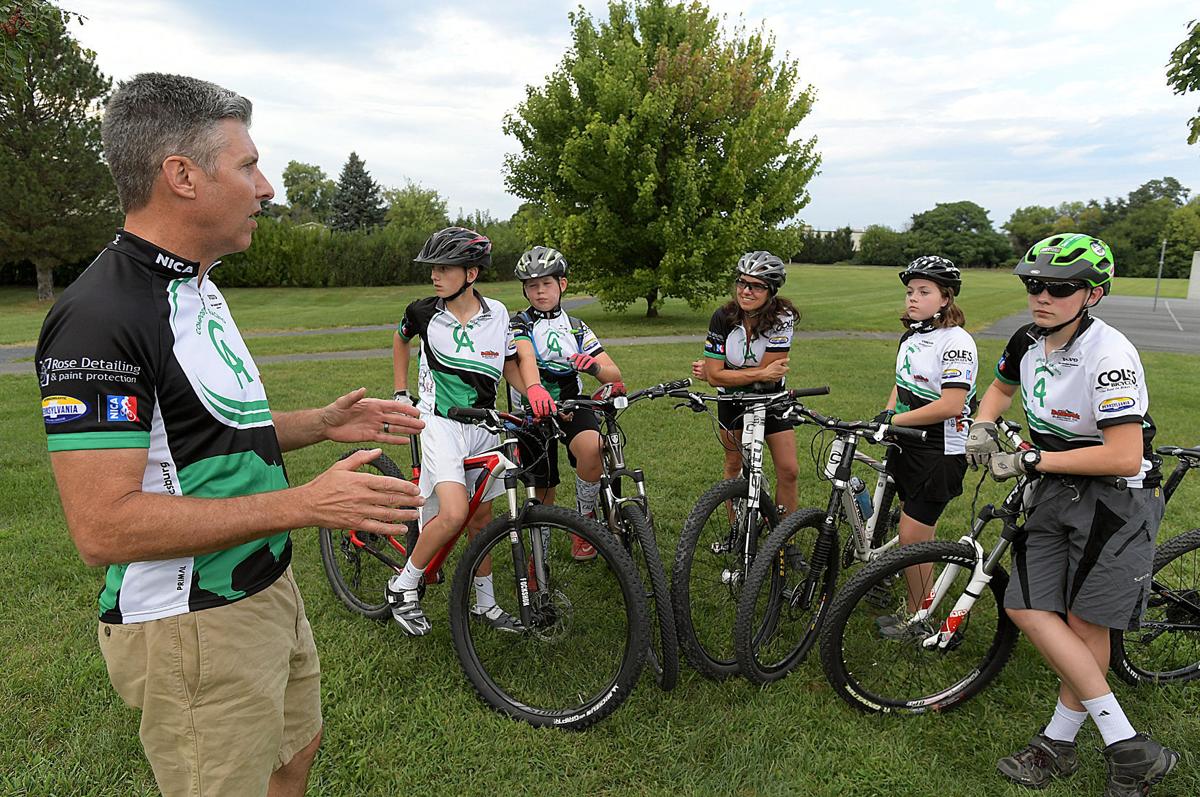 But right now it’s loving him back with a vengeance.

The man primarily responsible for bringing scholastic mountain biking to the state of Pennsylvania grew up about a mile from where Sunday’s historic first race transpired.

Perry County born and bred, the now 42-year-old Kuhn graduated from Susquenita High School in the early 1990s, and it was around that time that either he found mountain biking or, as he suggests, mountain biking found him.

He’s been riding ever since.

So it’s important to him that younger generations ride, too.

That’s certainly the main reason he and a group of staffers and volunteers built what would become the Pennsylvania Interscholastic Cycling League, which held its first races Sunday morning and afternoon at Oesterling Farm in Marysville.

“That’s a personal connection,” Kuhn said Sunday as organizers prepared the awards ceremony to honor many of the more than 200 statewide riders, grades 6 through 12, who participated in various races categorized by sex, age and experience.

“Very early on, (Oesterling Farm) was a place I would ride. That turned into building trails on the property. And, along the way, it also became my in-laws’ place as I married into the family. My wife grew up on this piece of property. So it’s close to home, it’s close to the heart, and it works really well for a league event because it has exactly what we’re looking for.”

In building this league — the idea blossomed about three years ago and kicked into high gear last winter with the pursuit of potential coaches across the state — Kuhn knew he needed to attract not just the diehard enthusiasts but also inexperienced and curious riders.

The track at Oesterling Farm, he says, includes enough twists and turns to keep the veteran riders happy while also lacking the intimidation factors that might discourage first-time racers.

Said Carlisle coach Mark Heeb: “For me, those first-time racers, beginning riders, the people being exposed, (their success) was more exciting than my hardcore group of varsity and JV and freshmen boys who are experienced riders. To see the excitement of the new kids, that’s the real deal.”

Kuhn estimates at least 600 were in attendance Sunday at Oesterling Farm, tucked into the woods along Route 850. And so many were thrilled to be participating in official scholastic races or rooting for those who did.

“I want to thank each of you for giving me this opportunity and this memory of today,” Kuhn, the league director, told the crowd during the awards ceremony an hour or so after the last racers crossed the finish line. “It’s something I’m going to cherish for a very long time.”

Kuhn and other organizers say this is the 19th such league across the country, and officials from the National Interscholastic Cycling Association in California were on hand to make sure Pennsylvania’s first ride went off without a hitch.

This was the first of five races this fall, with others scheduled in Allentown, Pittsburgh, Indiana County and in Fair Mill, Maryland, just across the Mason-Dixon line and several miles southeast of Oxford, Pa.

The league boasts an interactive website (pamtb.org), which posts results of the races and provides further background on how Kuhn and crew got this league up and running.

Among the 23 current programs across the state, there are several from the District 3 area, including Carlisle, Chambersburg, Elizabethtown and Twin Valley, though independent riders are allowed to participate as well.

Kuhn said a personal background in event promotion, plus “a very talented crew of men and women from across the state to help me make this league a reality,” played pivotal roles in getting the PICL off the ground.

In a media release sent out last week, the league said race promotion, timing, course preparation and risk management are guaranteed to every participating student. The various schools showcased unique uniform jerseys, and the racers ride anywhere from 8-18 miles (high school) or 4-8 miles (middle school) at each event.

The winners at each high school event earned a leader jersey as well, similar to the yellow jersey worn by the leader at the annual Tour de France.

Mountain biking is obviously starting as, and will likely remain, a club sport, which allows it to form through the help of a school district or independently. Though Dr. Robert Lombardi, executive director of the Pennsylvania Interscholastic Athletic Association, told The Sentinel last week his organization is always open to discussion with any sport looking to join the PIAA, which oversees the vast majority of organized scholastic sports in Pennsylvania.

“We have not heard of any interest of the cycling league to become part of the PIAA,” he said. “At a time when the membership would like to have this dialogue, we would be open for discussion.

“We think it’s great that students are participating in these types of activities and learning the lessons that go along with this type of participation. If we get enough schools that have some interest, we would be glad to have the discussion.”

Kuhn says he’s been thrilled by the response from the various communities thus far, and that’s why his expectations for continued growth are so high.

“The league is focused on getting as many kids as possible outside and on bikes,” he said through last week’s media release. “It promotes a healthy and very fun activity for kids and introduces them to a sport that can be enjoyed their whole lives.”