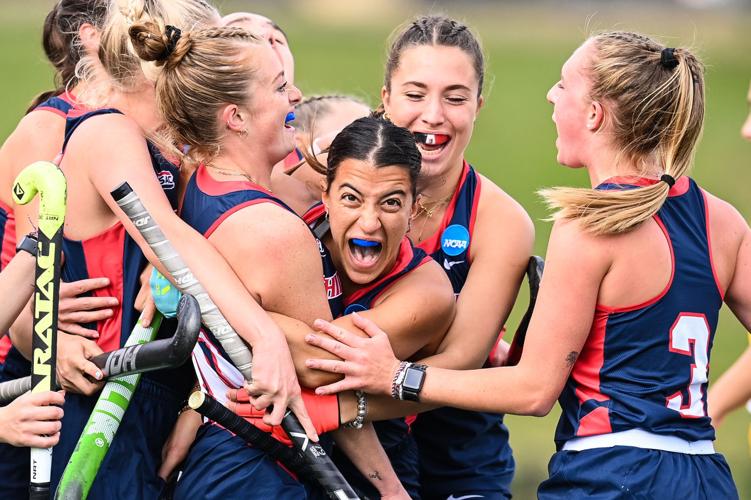 Jazmin Petrantonio (center) of Shippensburg celebrates with her teammates after scoring against West Chester in the NCAA DII Championship game at Chryst Field at Biemesderfer Stadium in Millersville, Pa., on Sunday. 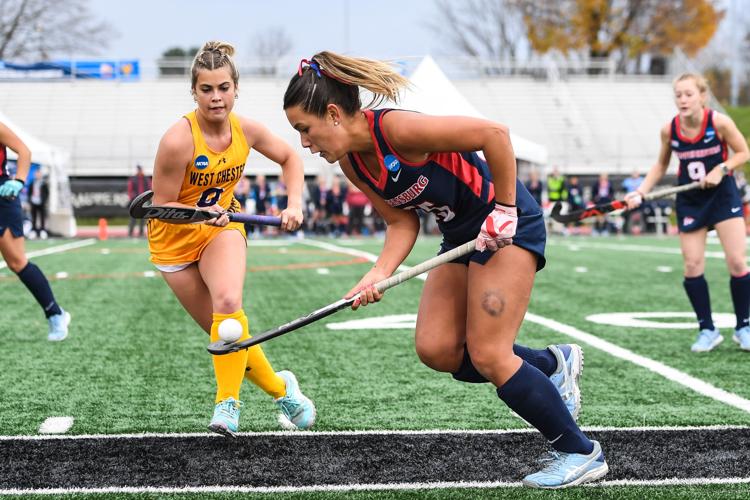 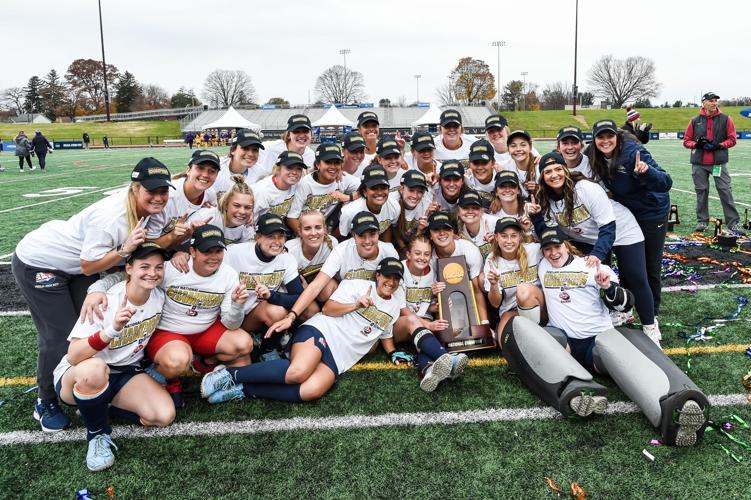 Shippensburg poses for a team photos after defeating West Chester in the NCAA DII Championship game at Chryst Field at Biemesderfer Stadium in Millersville, Pa., on Sunday. 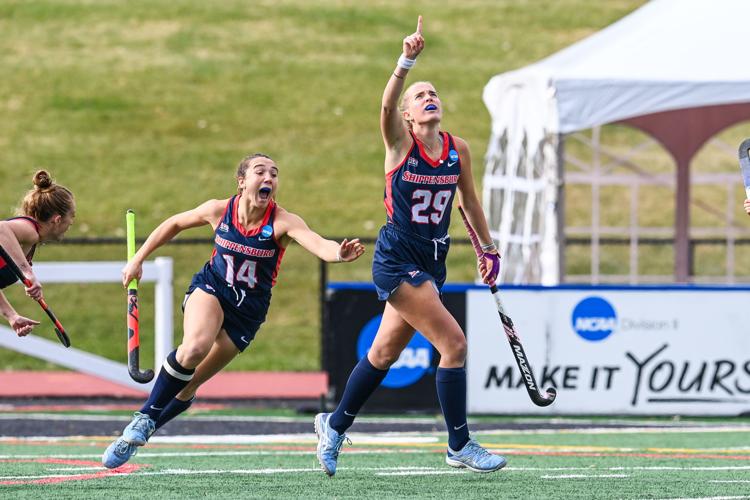 Jenna Sluymer (29) of Shippensburg points to the sky after scoring the game's first goal while Anna Gruber (14) celebrates against West Chester in the NCAA DII Championship game at Chryst Field at Biemesderfer Stadium in Millersville, Pa., on Sunday.

MILLERSVILLE — “When it was time to take my fifth year, I thought to myself, where else am I going to go?” said Shippensburg University field hockey’s Jazmin Petrantonio, sitting next to teammates Caitlyn Wink and Adrienne McGarrigle and head coach Tara Zollinger Sunday at a post-game press conference table.

“Where else am I going to feel this way?”

Petrantonio, along with Wink, returned for their fourth year of eligibility this fall after the coronavirus pandemic stripped the Raiders of their 2020 campaign last year.

And when Petrantonio, Wink and the rest of the SU returning group stepped on the Robb Sports Complex turf Sept. 5 against Coker University for their season-opening game, they came in with one mindset, one hunger, one decision, one end goal: bring an NCAA Division II National Championship trophy back to the Shippensburg University campus.

Behind three first-quarter goals, SU blanked and dethroned the defending national champions 3-0 to capture its sixth overall NCAA title and the fourth in the last five seasons.

“We got such closure today, and there’s not a better way to end this than having this one in front of us,” Petrantonio said, gripping the massive trophy sitting at the front of the press conference table. “[To] bring it back home, and to have such an amazing group of people working towards this, at the end of the day, nothing else mattered. We wanted this the most and this is what we worked for, for so long, for literally two years.”

The Raiders and the Golden Rams previously met three times over the course of their 2021 campaigns, SU taking the clean sweep with 4-3, 4-0 and 3-1 victories, including the PSAC championship game Nov. 7. But in two of those three meetings, it was West Chester that netted the first goals of the game.

In Sunday’s bout, the Raiders made sure they were the first ones celebrating. And they did so one minutes, 27 seconds into the contest.

“We develop this mindset,” Zollinger said, “we call it the ‘down one mindset.’ When we step on the field, no matter what the time of the game is, no matter what the score of the game is, we’re gonna play like we’re down one goal, and we’re hungry, and we need to go out there and play to our game plan, and stick together, play Ship hockey and find the back of the net.”

Integrating that mindset, SU sprinted down the length of the field on the attack. Petrantonio smacked the first shot on goal, but West Chester goalkeeper Claire Nielsen swiped it away. However, the Raiders retained the rebound and a few passes later, Jenna Sluymer whistled a shot to the back of the cage for the 1-0 lead.

“The goal itself absolutely gave us the energy in the opening moments,” Zollinger said, “but how that goal was scored, gave us, I think, even more confidence for the remainder of the game.”

After five minutes elapsed, the Raiders found themselves knocking the door once more, as they were presented with their first corner opportunity. On the insert, Wink shuffled the ball to Petrantonio, who one-timed her shot, sending it screaming between the posts to balloon the lead to two.

At the 7:57 mark of the game, Valu Paul pocketed the collective hat trick and final score of the match, slipping a reversed shot past Nielsen. West Chester collected a pair of takes on goal in the second quarter but nothing came to fruition. SU freshman Merel Hoesktra also made a defensive save in the second half, redirecting an attempted shot up and over the top bar of the cage.

“This senior class is so united towards a common goal,” Zollinger said, “and they did such a fantastic job of teaching our younger players. This is what Ship hockey is about. This is the intensity, this is the responsibility that we have in representing our university.”

The hoisting of the championship trophy Sunday marked as the cherry on top to a historic season for the Raiders. They ran the gauntlet to the tune of a perfect 20-0 record and became the first PSAC school since East Stroudsburg University in 2015 to claim both the conference and national championship crown in the same season. They also cemented themselves as the first undefeated team since 2010 to bag the NCAA title.

Individually, Petrantonio shattered the school’s single-season record in goals (37) and concludes her famed collegiate career with 106 careers scores, the third most in NCAA Division II history. For Zollinger, she remains unbowed in NCAA tournament play at 8-0.

The Golden Rams finished their trumpeted 2021 season with a 17-5 record.

“Obviously, we gave up some goals early and that’s not what we anticipated happening,” WCU head coach Amy Cohen said, “but we never quit. They kept their heads up, they continued to play, they played hard. We just we lost to a better team this time out.”

But as Petrantonio, Wink, McGarrigle and Zollinger spoke in what’s primed to be their final post-game press conference together, with the mountainous championship hardware placed at the front of the table, the reflection of the lights above bouncing off the glimmering gold, the four Raiders reprised what the title meant.

They were a group that came to the neighboring-county university together in 2017. They brought home the crown that same fall and the fall after in 2018. They finished their time together with one final trophy raising, one final confetti shower.

They completed that decision they embarked on Sept. 5.

“Like I said, it all came full circle. But the team comes first. This comes first,” said Petrantonio, pointing at the trophy, “before any of the 37 goals or any accolades. This comes first, because at the end of the day, we all worked towards this thing, and I put my part into this work. So, this is for all of us today.”

“Being alongside that growth for four years, on and off the field, in the classroom, obviously as hockey players, but more importantly as people,” Zollinger said. “To see who they have grown into and the relationships that they build, and I know that at the end of the day, they’re going to have each other no matter what, and it’s really, really special. So, this senior class will always hold a really special place in my heart, professionally and personally, and I’m so grateful to be someone in their corner for the rest of their lives.”

After four seasons with Paris Basketball, a team in France's professional league, Shippensburg University grad Dustin Sleva is getting his cha…

For the second straight year, Shippensburg University has been selected as one of the 22 finalists for the 2023 National Collegiate Athletic A…

Jazmin Petrantonio (center) of Shippensburg celebrates with her teammates after scoring against West Chester in the NCAA DII Championship game at Chryst Field at Biemesderfer Stadium in Millersville, Pa., on Sunday.

Shippensburg poses for a team photos after defeating West Chester in the NCAA DII Championship game at Chryst Field at Biemesderfer Stadium in Millersville, Pa., on Sunday.

Jenna Sluymer (29) of Shippensburg points to the sky after scoring the game's first goal while Anna Gruber (14) celebrates against West Chester in the NCAA DII Championship game at Chryst Field at Biemesderfer Stadium in Millersville, Pa., on Sunday.