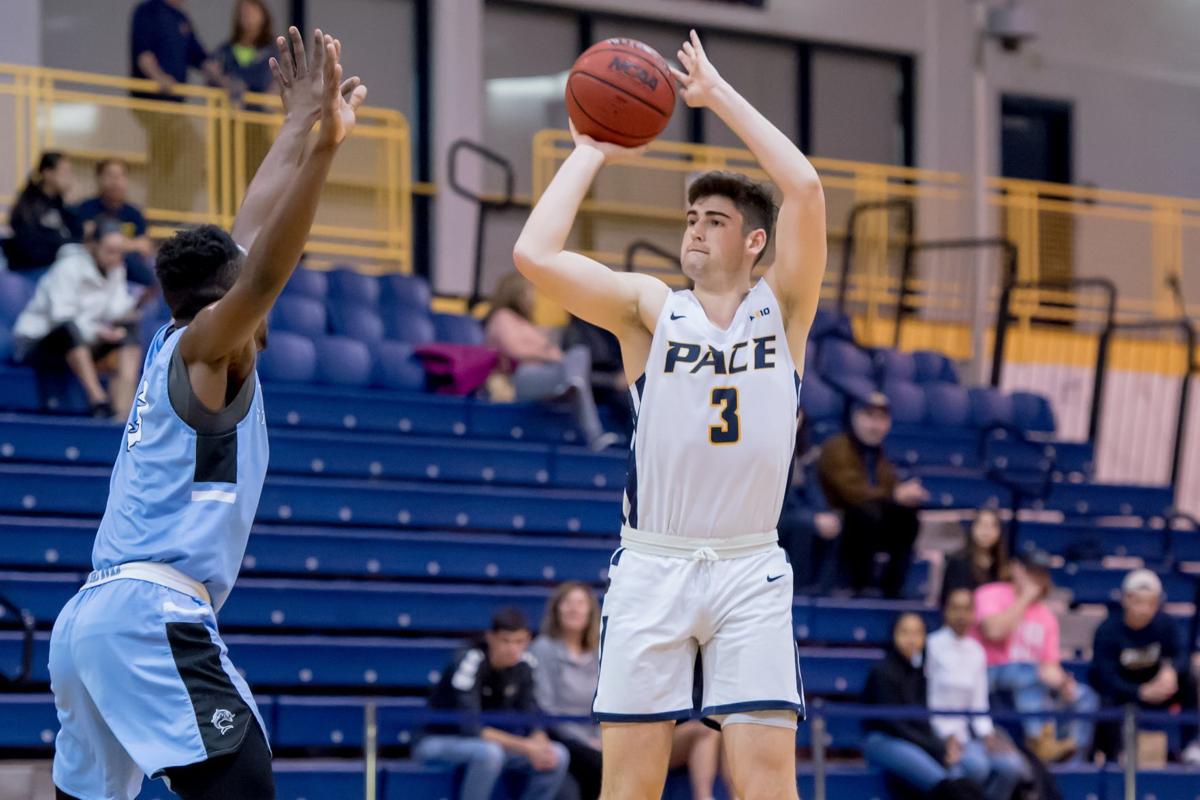 Former Trinity guard Austin Gilbertson, right, stepped in right away when he got to Pace's campus and earned a starting job. He hasn't relinquished it since. 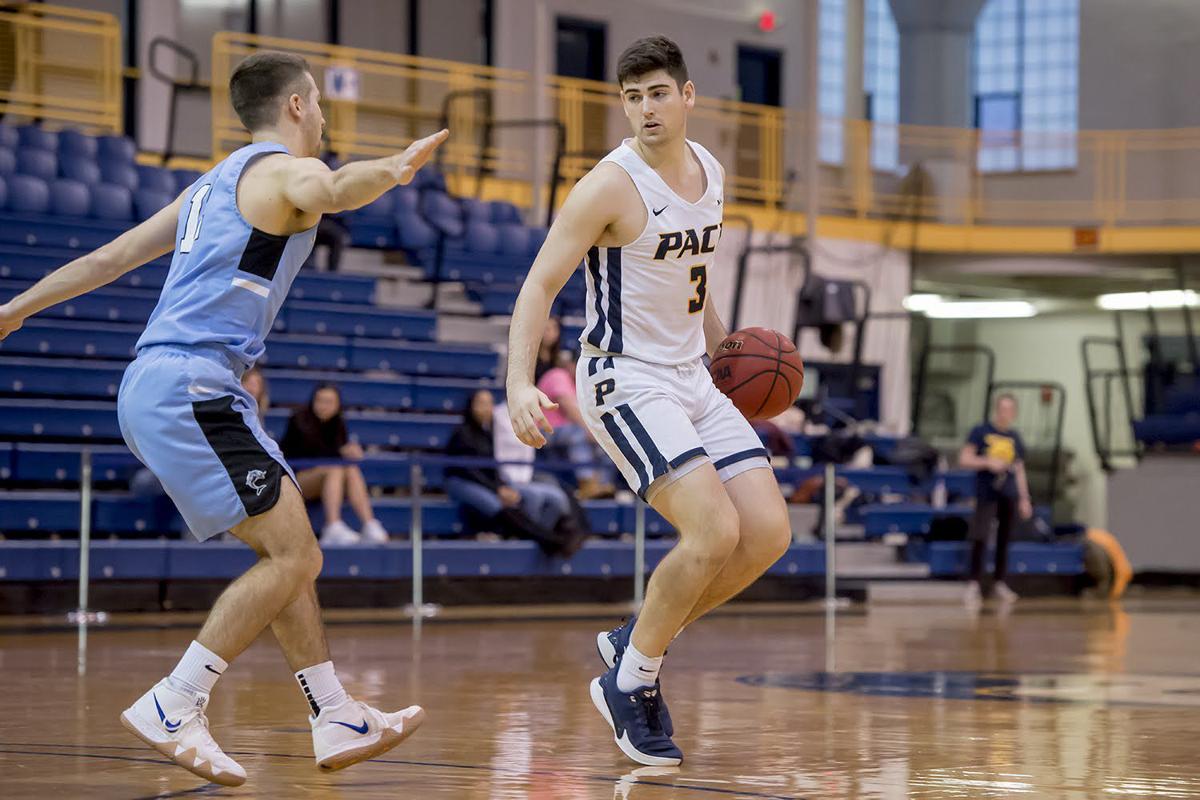 Austin Gilbertson scored 1,300 points and won four district titles at Trinity. He's already north of 800 in three years at Pace and is leading them to another conference playoff appearance.

Steve Navaroli For The Sentinel

Despite being a three-time all-state guard at Trinity High School, Austin Gilbertson described his first few college basketball games at Pace University as a “show.”

“The speed of the game is such a difference,” he said. “Especially if you are down there in the fire and see what’s going on.”

That being said, it’s not as if Gilbertson was a spectator early on at Pace. It didn’t take him long to be ready and part of the “show.”

He started all of the Setters’ 28 games as a freshman, reaching double figures in 15 of those, and finished the season averaging 11.3 points per game. His 81.8% free throw percentage led the team that campaign.

Setters head coach Matt Healing saw something in Gilbertson, especially with the great success the 6-foot-4 guard had at Trinity.

“Austin really stood out to me at the high school level and when I saw him at his AAU level. We envisioned a guy that is a leader,” the coach said. “When you are recruiting at our level, everybody has talent. We thought Austin would be that guy. He’s a winner. He’s tough as nails.”

Gilbertson and fellow Pace junior guard Brandon Jacobs seized an opportunity that was in front of them as rookies.

“Coach told us from the jump, ‘It’s open. We’ve got some spots open, and if you want to work hard enough you are there,’” Gilbertson said. “Coach gave us the reigns from freshmen year, and our success on and off the court has been there ever since.

“We are lucky enough that we came to a program that we could make a path early. That’s what you want.”

The two players found homes and have been leading the way ever since.

“Both came in as freshmen and were admitted within a week of each other. We were absolutely giddy with the thought of them playing together,” said Healing. “We thought they would mesh well and complement each other. They were both ready right away and became great friends.

“We thought they could get the ball right away. We had older guys they had to beat out, and they earned it. How many teams at our level start a freshman backcourt? We were competitive, and they did a great job.”

A year later, Gilbertson continued his stellar play with 9.7 points, 4.2 boards and 2.4 assists per game — all while maintaining his spot on the Eastern College Athletic Conference Academic Honor Rolls.

Although the result wasn't what we wanted today, there is nothing quite like a half-court buzzer-beater to send a game into overtime.

I am sure @SportsCenter and #SCtop10 agree. pic.twitter.com/aWJPhZypE0

This season, he is scoring 10.1 points per game, yet it’s Gilbertson’s play away from the ball and leadership that makes him special. His defensive play has improved dramatically since high school, helping the team to a 16-9 (8-8 Northeast 10 Conference) record this season.

“I am most pleased with my consistency of how active I am and how involved I am in a game,” he said. “I don’t need to be scoring.

“I came into college, as I am sure coach would say, ‘not the greatest of defenders.’ I couldn’t guard a guy to say my life, but now I am very confident I can guard anybody. It’s not all about scoring 25 points a game, it’s more what little things I can do to help us win.”

“He played through a quad injury and didn’t miss a game. He was still a leader and what a real example to show our guys,” Healing said. “His leadership and toughness is going to separate him from others in life.

“If I asked everybody on our team who is our heart and soul of the team, early everyone would say Austin.”

The ultimate team player at both ends of the floor.

“He’s as consistent as it gets,” Healing said. “If the situation requires, he’s a guy that can get us 15-20 but does so much more. It’s all about team play, and Austin sets the tone for that.

“I think it’s different world now, everybody wants to see their picture everywhere and take bows for scoring points per game. To sacrifice a couple hundred points over his career for team success says a lot about him and the Trinity program. We are so proud of him.”

He’s getting his share, though, with 838 points already for his career and 206 assists.

Gilbertson already had plenty of success with a team and individually in high school. He was part of Trinity’s four straight District 3 titles along with DeSales forward Timmy Edwards and finished with more than 1,300 career points.

Ironically, with all the success Gilbertson has had at Pace, he nearly went elsewhere to play and study.

“Pace wasn’t even being considered,” he said. “I was choosing other schools. Then I visited, and it was completely obvious to me where I was going to go. I met the coaches, the school and it was easy. They gave me a plan on what was going to be my future at the school, and everything has worked out to plan for me.”

Pace has more than a week off since Tuesday’s overtime loss to Southern Connecticut State University before facing Adelphi University next week. The Setters are in the mix for one of the NE10’s conference playoff spots with the regular season set to end Feb. 25.

Catching Up With ... Shippensburg's Ariel Jones, who is already challenging the PSAC points record

Our college athlete series, Catching Up With ..., continues with Shippensburg's Ariel Jones who is already challenging the PSAC points record.

Catching Up With ... Camp Hill QB Michael Shuster made the right call four years ago committing to Penn State

Our college athlete series, Catching Up With ..., continues with Michael Shuster, an electric District 3-winning quarterback at Camp Hill who walked on at PSU, where he was drawn by a chance to follow his family's footsteps.

Our college athlete series, Catching Up With ..., continues with a pair of Boiling Springs grads reunited at Penn State-Harrisburg. The Hemler sisters are separated by three years, but they're similar in many other ways.

Our college athlete series, Catching Up With ..., continues with Dickinson women's soccer freshman Meg Tate, a Carlisle grad, who is leading the Red Devils' charge through the NCAA Tournament.

Catching Up With ... Scott Frey, still having an impact at Messiah after 20 years, 400 wins and 5 national titles

Our college athlete series, Catching Up With ..., continues with a conversation with Messiah's Scott Frey, winner of 400 women's soccer games in 20 years coaching. Plus notes on five local grads playing collegiately.

Catching Up With ... Despite being a two-time PIAA champ, Trinity grad Amanda Knaub had challenges to overcome at Monmouth

Our college athlete series, Catching Up With ..., returns this year with a story on a decorated soccer player who has won titles at Trinity and now Monmouth. Includes an attached notebook on five other locals set for their 2019 seasons.

Former Trinity guard Austin Gilbertson, right, stepped in right away when he got to Pace's campus and earned a starting job. He hasn't relinquished it since.

Austin Gilbertson scored 1,300 points and won four district titles at Trinity. He's already north of 800 in three years at Pace and is leading them to another conference playoff appearance.