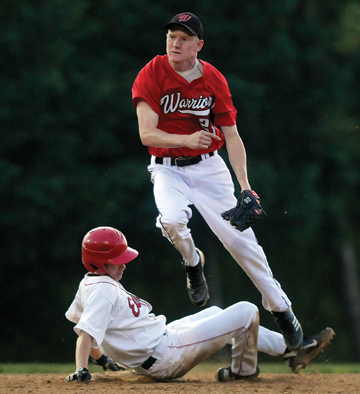 Cumberland Valley's #7, Ben Eppley, bottom is tagged out at second base in the first inning of their game by Warwick's #21, DJ Johnson, after being forced to second on a bunt. 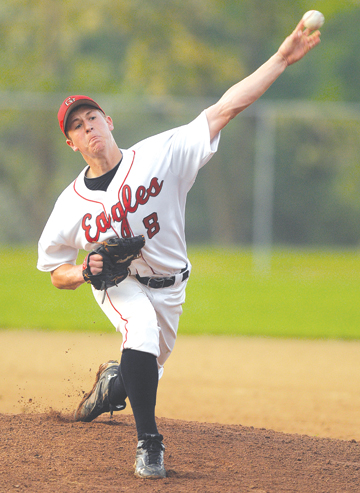 Cumberland Valley's pitcher, #8, Eric Sawyer, unleashes a strike against a Warwick batter during the first inning of their game on Monday night.

Cumberland Valley head coach Mike Whitehead Jr. knew one thing coming into the District 3 Class AAAA opening round match against the Warwick Warriors: The Warriors are a pretty good baseball team despite being the 11th seed.

"You know, to finish second in the Lancaster-Lebanon League is an accomplishment," the coach said. "If you're playing at this point in the season, you have at least two good starting pitchers. We saw just how good their number two was (Monday)."

Warwick scored two runs on three hits in the first inning, added a third run in the second and held on for the 3-2 win over Cumberland Valley at Creekview Park.

"I wasn't too worried," Whitehead said about falling behind early in the game. "We've played in a lot of close games, and some games we've trailed early on. I was confident that our team would come back, and with (Eric) Sawyer on the mound, I liked our chances."

Sawyer gave up just three hits, all in the first inning, and made Whitehead's decision to allow the starter to throw a complete game all the more logical as only two Warwick batters reached second base after getting the 3-0 lead.

"He didn't give up another run, did he?" the coach said. "No, we knew coming in that he was the guy we wanted out there, and he pitched that way. His effort really gave us a chance to get back into the game."

The Eagles started the comeback attempt in the second inning after trailing 3-0 when Sawyer reached on a fielder's choice with two outs. Jordan Bush walked to put runners on first and second, and B.J. Leer hit a blooper to shallow center field that scored Sawyer.

The second CV run came in the third inning when Matt Davis laced a two-out double to deep center field. Designated hitter Matt Kibler drove him in with a single to left-center, cutting the Warrior lead to 3-2.

"We really didn't get anything going offensively," Whitehead said. "We had some hard-hit balls, but they didn't find the gaps. Credit (Tyler) Morris with that. Sometimes it was a little backward the way he pitched to us. Early in the game he started a lot of guys with a curve ball and then went fastball. We were aggressive early and it didn't work out."

"That guy gave them a great effort," Whitehead said of Morris. "But don't forget that a team like that doesn't get to be second in the L-L without a good number-two pitcher. He made some good pitches and got some help from his defense."

The loss wraps up the Eagles' season on a bit of a sad note, but Whitehead Jr. noted that his squad is rather young, and a game like this, in a setting like this, should ultimately benefit a team that won the Commonwealth Division for the first time in nine years.

"This season has been a good one," the coach said. "We only had four seniors defensively, and there were six underclassmen that had significant playing time. Everyone played hard for us all season, and this team has a lot to be proud of. We played our type of game and we lost to a good team."

Cumberland Valley's #7, Ben Eppley, bottom is tagged out at second base in the first inning of their game by Warwick's #21, DJ Johnson, after being forced to second on a bunt.

Cumberland Valley's pitcher, #8, Eric Sawyer, unleashes a strike against a Warwick batter during the first inning of their game on Monday night.
© Copyright 2020 The Sentinel Newspaper, 327 B St. Carlisle, PA | Terms of Use | Privacy Policy
Powered by BLOX Content Management System from TownNews.com.
You don't have any notifications.