Become a Member
Read Today's E-edition
Share This
'A summer like no other': John Peters on his PA Amateur win, his Carlisle course record and enrolling at Duke
0 Comments
Share this
1 of 3 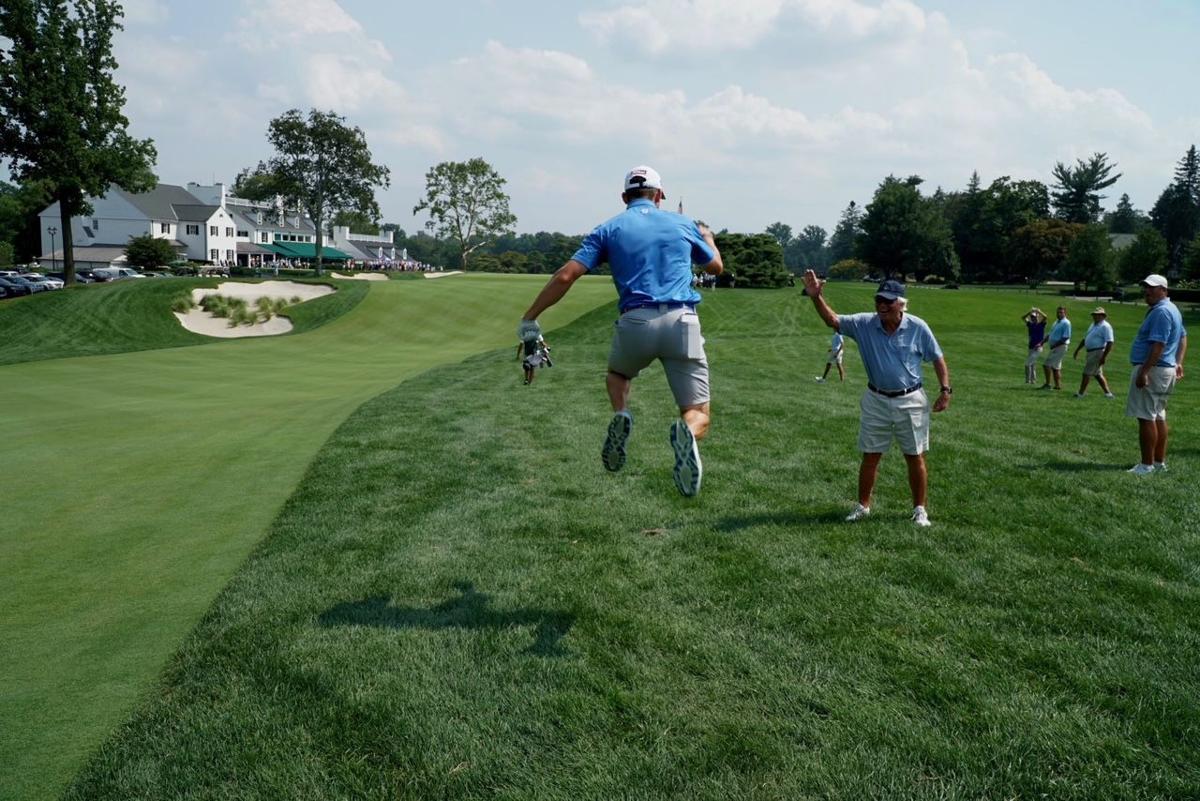 John Peters, left, leaps in the air after holing out from 193 yards on the 18th hole for eagle to win the Pennsylvania Amateur Wednesday at Merion Golf Club. 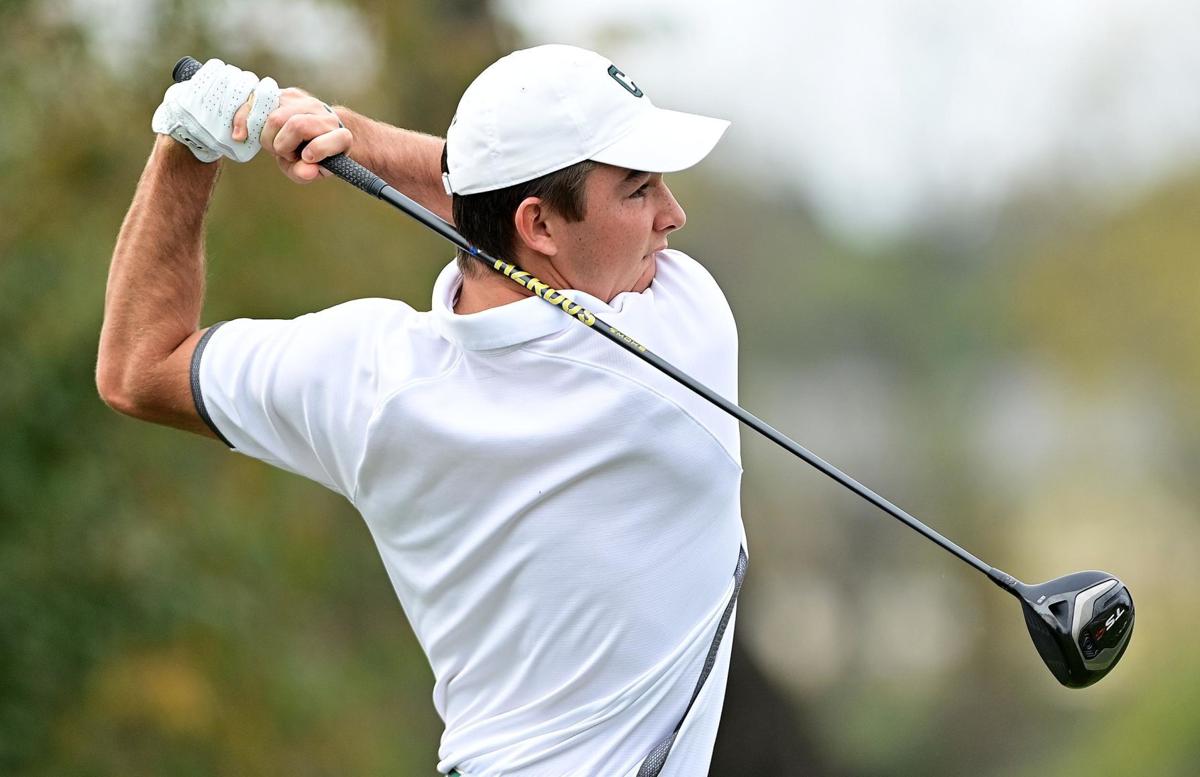 John Peters won the Pennsylvania Amateur Wednesday thanks to a 193-yard eagle on the 18th hole at Merion Country Club. 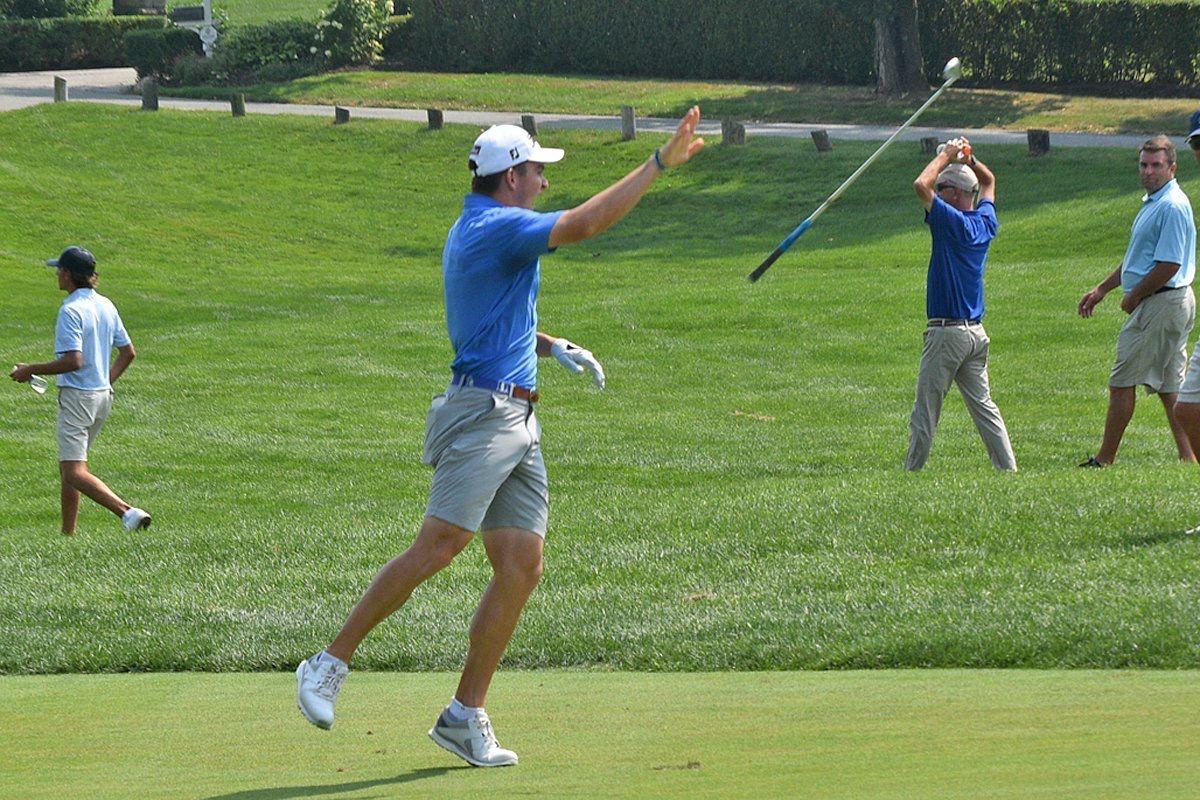 John Peters tosses his club in celebration after sinking a 193-yard shot for eagle on the 18th hole at Merion Golf Club Wednesday to win the Pennsylvania Amateur.

For sports like basketball and football, a strong vertical leap is a desired skill. You want the ability to out-body an opponent for a rebound off the glass or snag a one-handed game-clinching touchdown over two defenders in the corner of the endzone.

In golf, a vertical isn’t as needed. A rhythmic swing plane, solid club speed and the capability to work around the greens should suffice on most occasions to card a respectable score.

As John Peters walked up to the famed 18th green at Merion Golf Club’s East Course Wednesday during the final round of the Pennsylvania Golf Association Amateur Tournament, he was showered with claps, pats on the back and cheers. And along the way, he sprung a few feet in the air.

“After it all, I was like, ‘What was I doing? Why on earth would someone jump like that on a golf course?’ It’s just the strangest thing,” Peters said with a laugh via phone Thursday after seeing a photograph of his celebratory leap featured on Pennsylvania Golf Association’s Twitter. “But that picture is really, really funny and my mom said, ‘That’s a picture that says 1,000 words.’ And it definitely does. It’s a cool moment that they got that.”

Peters credits himself as a naturally competitive person. While he didn’t pick up a golf club until he was 11-years-old, he’s played other sports such as baseball and wrestling and even finds himself becoming competitive in the classroom, the Carlisle grad and Duke University pledge said. No matter the activity or circumstance, he’s going to give it his all.

That competitive nature showed Wednesday on the par-3 125-yard 13th. On his tee shot, Peters struck the pin. That’s when he began to feel momentum swinging in his direction.

“My day really started on Hole 13,” Peters said. “And after that, I really started noticing I had a ton of adrenaline. I flew two out of the next three greens and was just hitting it too long. And I was hitting my appropriate clubs, but they were just flying too far.”

After a string of pars on holes 15 and 16, Peters missed a 15-footer for birdie on Hole 17 but sat one back of the lead with a number of competitors already in the clubhouse. His goal on Hole 18: set himself up for a birdie and a playoff at 1-over par.

With an 8-iron in hand, Peters knew he wanted to land his approach 10-15 yards short and let the ball funnel to the pin. Once his ball hopped on the green and crested the ridge, Peters lost sight of it. Moments later, the crowd encompassing the green erupted.

Peters’ Wednesday afternoon heroics weren’t the first time he’s sunk a clutch shot or putt to capture a tournament or card a thunderous score. In the fall, Peters found himself in a playoff for the District 3 Class 3A boys title against Spring Grove’s Karl Frisk. After his approach shot on the first playoff hole landed 20 feet short of the green, Peters proceeded to whisk in his chip shot to claim the two-day tournament.

And just two weeks ago, Peters used a pair of eagles on holes 9 and 11 at Carlisle Country Club to break the single-round course record, shooting an 11-under par 60. His eagle putt on the par-5 18th danced around the cup, which would’ve carded him a 59. The previous record was a 62, set by Jeff Frazier.

The Thundering Herd alumnus is also a two-time All-Sentinel Golfer of the Year and took home the Mid-Penn Conference 3A title in 2019.

Peters said he credits the adjustments he made this winter for the numerous successes he’s had this summer. He changed golf coaches — he now works with renowned golf instructor Justin Parsons — and implemented a fade into his game rather than the draw he’s played for the majority of his career.

Peters said he’s also a major believer in karma. In his qualifying round for the United States Amateur, Peters played the incorrect ball with three holes to play. The two-stroke penalty ultimately shattered his chances to compete on the most-prominent amateur stage.

“I just feel like I’m learning more about how to play and how to be patient out there and just kind of how to make a golf course fit my game,” Peters said. “It is crazy to have that happen back-to-back but when your game is in a great spot, anything can happen really. So, I’ve just been kind of seeing what I can get.”

In two weeks’ time, Peters will embark on another venture in his already touted golf career — he’s joining the Blue Devils of Duke University. Peters said he’s eager to see what him and his teammates accomplish. While he may not drain 193-yard eagles or smash course records in his freshman campaign, Peters said he’s hoping to “leap” to a national championship.

“It’s a young team with a growth minded culture. We are really focused on winning a national championship, and that’s super exciting,” Peters said. “It’s a bunch of guys locked in, set in on that one goal, whether it’s this year, my senior year. But we’re just focused on each individually getting better — to give ourselves the best chance possible to make a run at it.”

“It was pretty competitive last year, and I know we had a really good team. But everybody in the league, they have kids coming up. So, it’s going to be good. It’ll be interesting to see who will be coming out in the end.” ~ Boiling Springs head coach Jim Lithgow

John Peters, left, leaps in the air after holing out from 193 yards on the 18th hole for eagle to win the Pennsylvania Amateur Wednesday at Merion Golf Club.

John Peters won the Pennsylvania Amateur Wednesday thanks to a 193-yard eagle on the 18th hole at Merion Country Club.

John Peters tosses his club in celebration after sinking a 193-yard shot for eagle on the 18th hole at Merion Golf Club Wednesday to win the Pennsylvania Amateur.