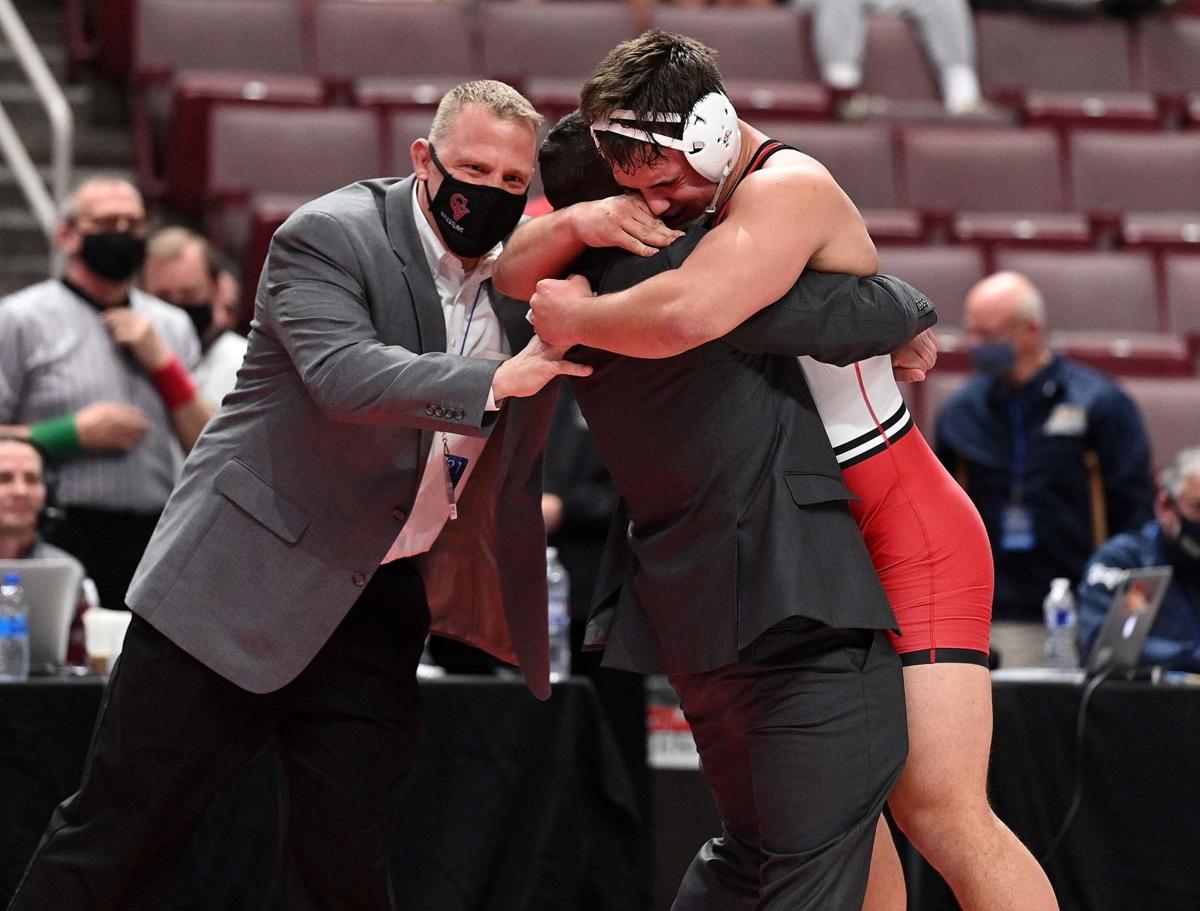 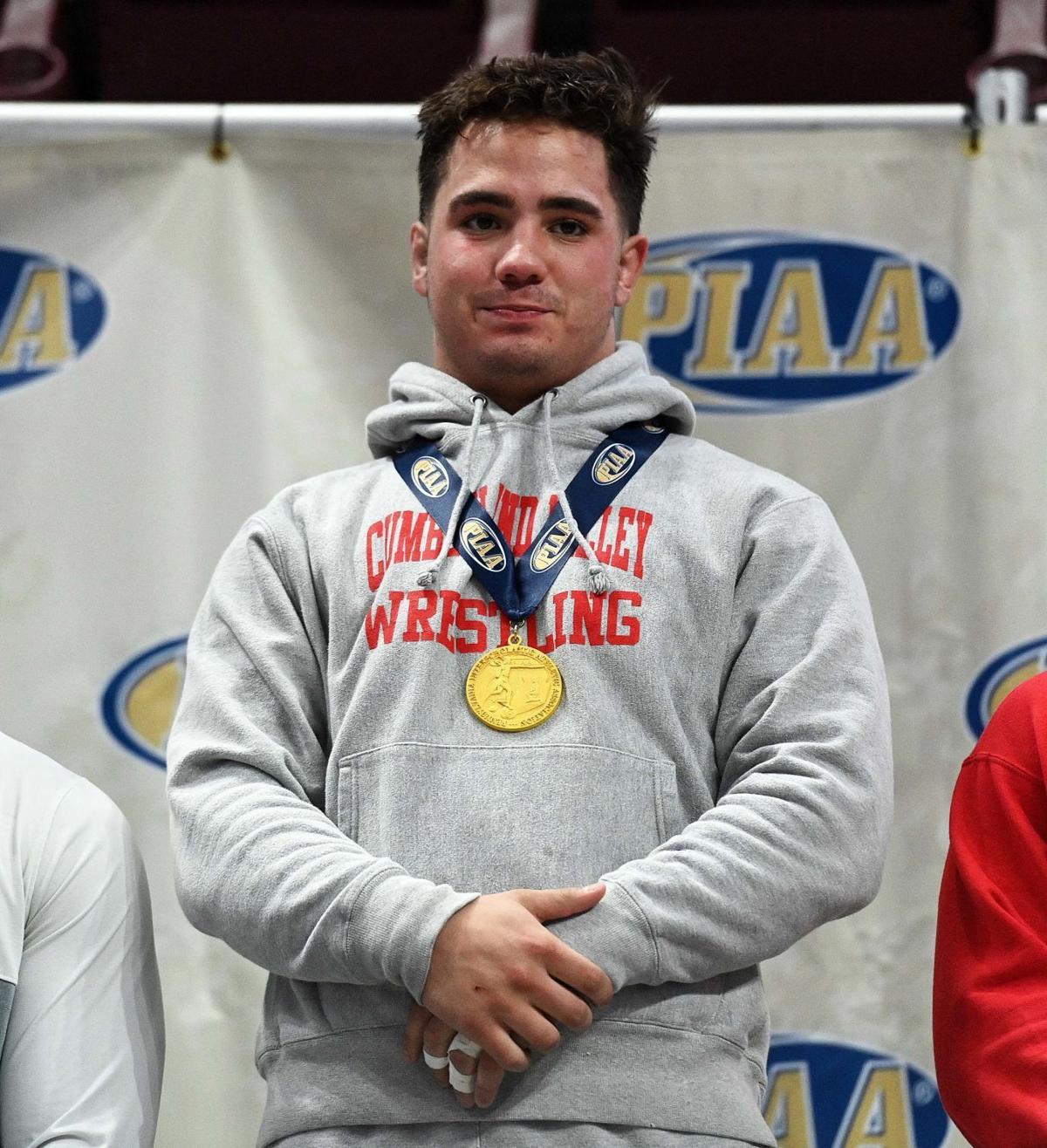 Cumberland Valley’s Jake Lucas poses for a photograph with his gold medal after defeating Wilson’s Josh Harkless in the 215-pound championship match during the PIAA Class 3A Individual Wrestling Championships held Saturday at Hershey’s Giant Center. 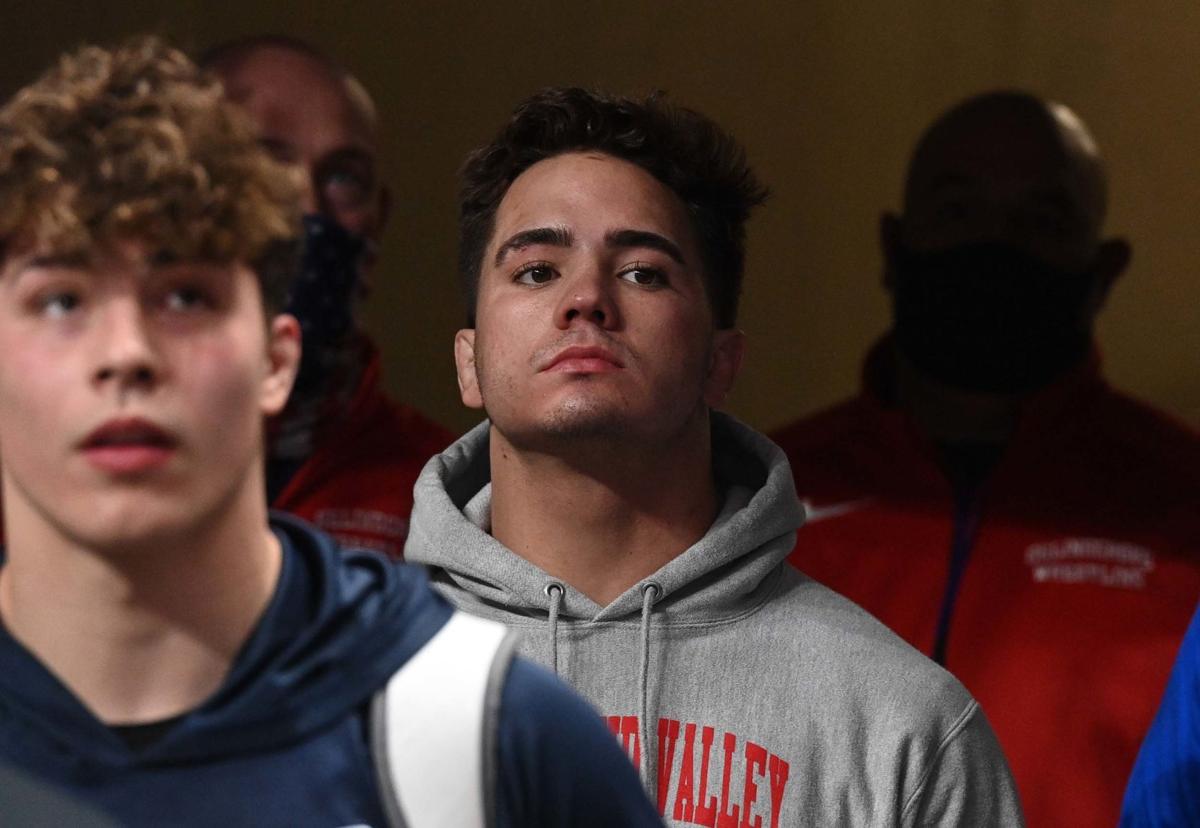 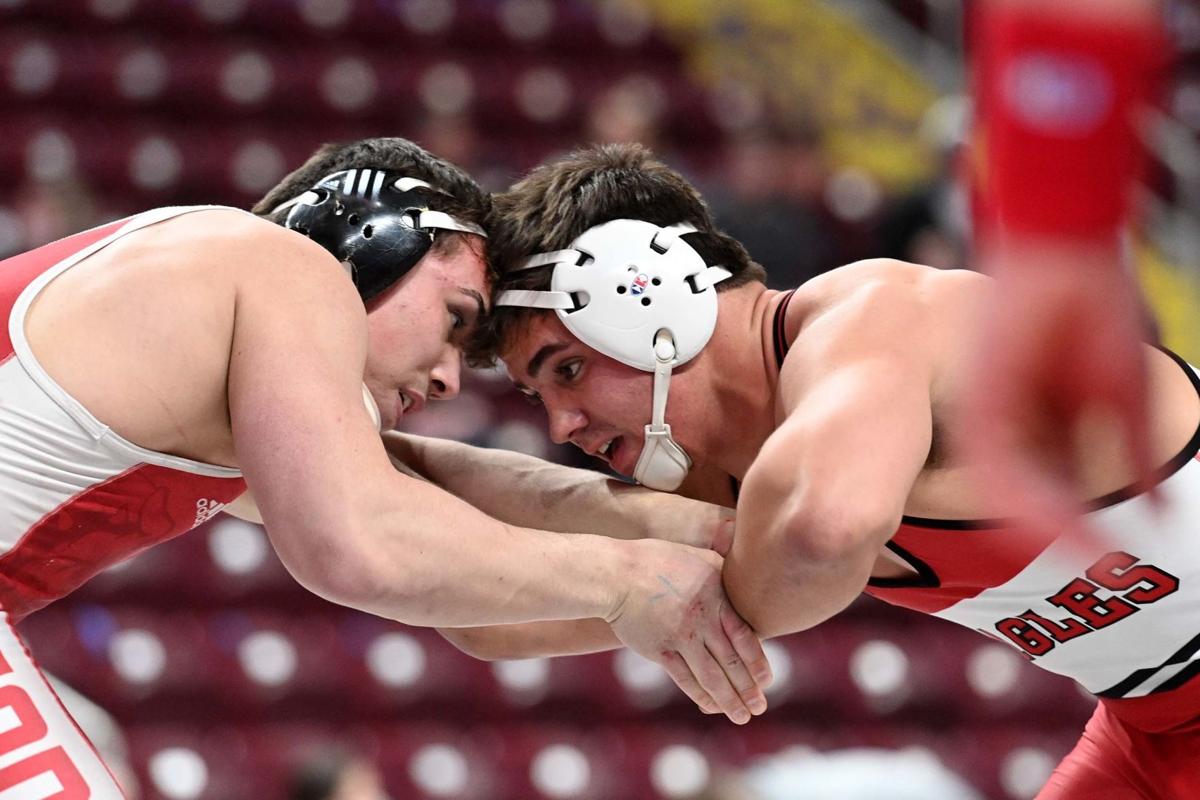 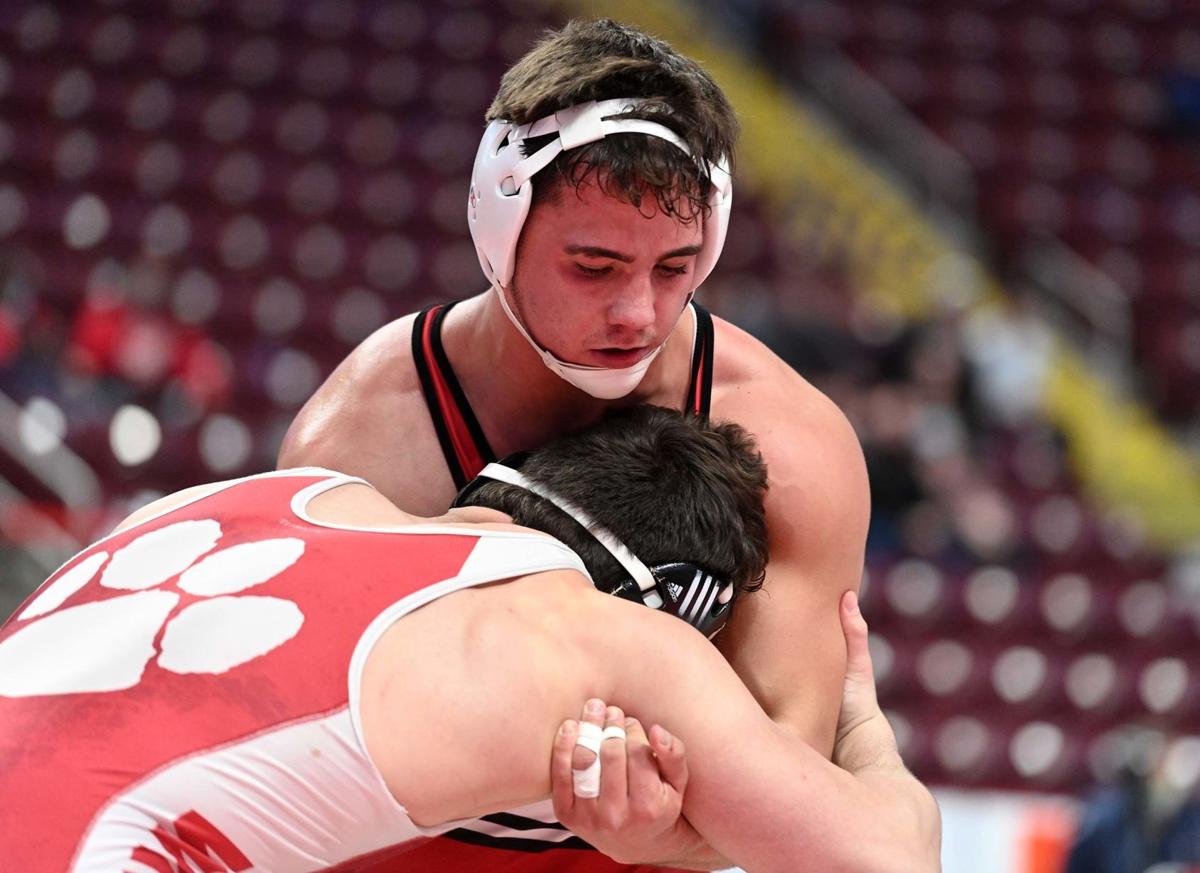 Clay Sauertieg For The Sentinel

The Eagles’ big man was a state qualifier in 2019 and reached the semifinals in 2020 before settling for fourth.

This time, he wasn’t going to be denied. Lucas upended Wilson’s Josh Harkless 3-1 in sudden victory Saturday night to win gold in the PIAA Class 3A Individual Wrestling Championships at 215 pounds.

“I’ve been wanting to feel this way for my whole wrestling career,” Lucas said after stepping off the mat.

Lucas’ path to gold was far from easy. The future Naval Academy attendee started off the day with a comfortable 13-2 major decision victory over Quinn Collins of Central Bucks East, but then hit Sun Valley’s Ryan Catka in the semis.

Catka, a senior who will be teammates with Lucas at Navy next season, upended the Eagles wrestler in last year’s third-place match at 195 pounds, 4-2 in the second tiebreaker period.

This time around, Lucas was able to overturn that result. He used a first-period go behind to take a 2-1 lead after one and held on for a 3-2 lead to advance him into the night’s finals.

“With the Catka match, I was really excited for that and ended up getting a big win,” Lucas said when asked if he felt like he was on a revenge tour of sorts.

Standing across from him in the finals was a familiar opponent.

Harkless and Lucas had already met twice this season, splitting the previous two matches. On Feb. 27, it was Lucas coming out on top with a 3-1 victory to grab a district title. On March 13 at the PIAA Class 3A West Super Regional, Harkless came out victorious to the tune of 3-2 decision win.

So, it wasn’t a surprise Cumberland Valley head coach Dave Heckard expected the third meeting between the two would be a tight affair.

“Harkless is such a strong kid, and Jake’s been in on him at different times and he’s been able to fend Jake off,” Heckard said of the prior meetings. “We just emphasized this week ‘staying on the leg.’”

In the finals matchup, it was once against Lucas who proved the early aggressor. He was able to get in deep on a single leg shot mid-way through the first period, but the two went off the mat before a takedown could occur, leading to a 0-0 score after the first period.

After starting the second on bottom, Lucas immediately got to his feet and out for an escape to take a 1-0 lead. He held that lead until early in the third period when Harkless matched him with an escape of his own. Lucas couldn’t connect on a pair of shot attempts before regulation ended, sending the match to sudden victory with Lucas and Harkless tied at 1-1.

That’s when Lucas made his move.

Jake Lucas with a single leg in sudden victory and he’s a PIAA state champion. pic.twitter.com/tQVodkIR8D

After attempting to use a left-sided underhook to get to his single leg for most of the match, Lucas switched it up in extra period. This time, he faked one way and came back the other for a misdirection single, corralling Harkless’s tree trunk-like left leg and dragging the big man to the mat for the winning score.

“I purposely didn’t show him that,” Lucas said of his change of approach late in the match. “I wanted to get a late takedown in the third because I knew that’s what it was going to come down to like it was at super regionals. I’ve been working on that a lot, so it felt good and it felt crisp.”

Lucas finishes his high school career with a clear trend of improvement year over year, having qualified for the regional tournament as a freshman, the state tournament as a sophomore, finishing fourth a year ago and then finally reaching the top step as a senior.

Heckard said after the match that that’s what he always hopes to see from his wrestlers.

“That’s always the goal, to keep improving, and he did that,” Heckard said. “That’s a kid that came up through our program since he was in kindergarten, so it’s really good to see.”

Lucas said he owes the gold to countless hours put in with Heckard and the rest of his team and coaches.

“People don’t see the time I put in the room,” he said. “It’s crazy just to see that that’s where hard work gets you. I think I really proved to myself that I can do anything I put my mind to.”

Cumberland Valley's Jake Lucas finally got his hands on that coveted state title. That's POTY worthy. Find out where other locals landed on this year's All-Sentinel team.

Billy Chamberlain has been approved to take over for Dave Heckard as the head coach of the Cumberland Valley wrestling team.

Cumberland Valley’s Jake Lucas poses for a photograph with his gold medal after defeating Wilson’s Josh Harkless in the 215-pound championship match during the PIAA Class 3A Individual Wrestling Championships held Saturday at Hershey’s Giant Center.