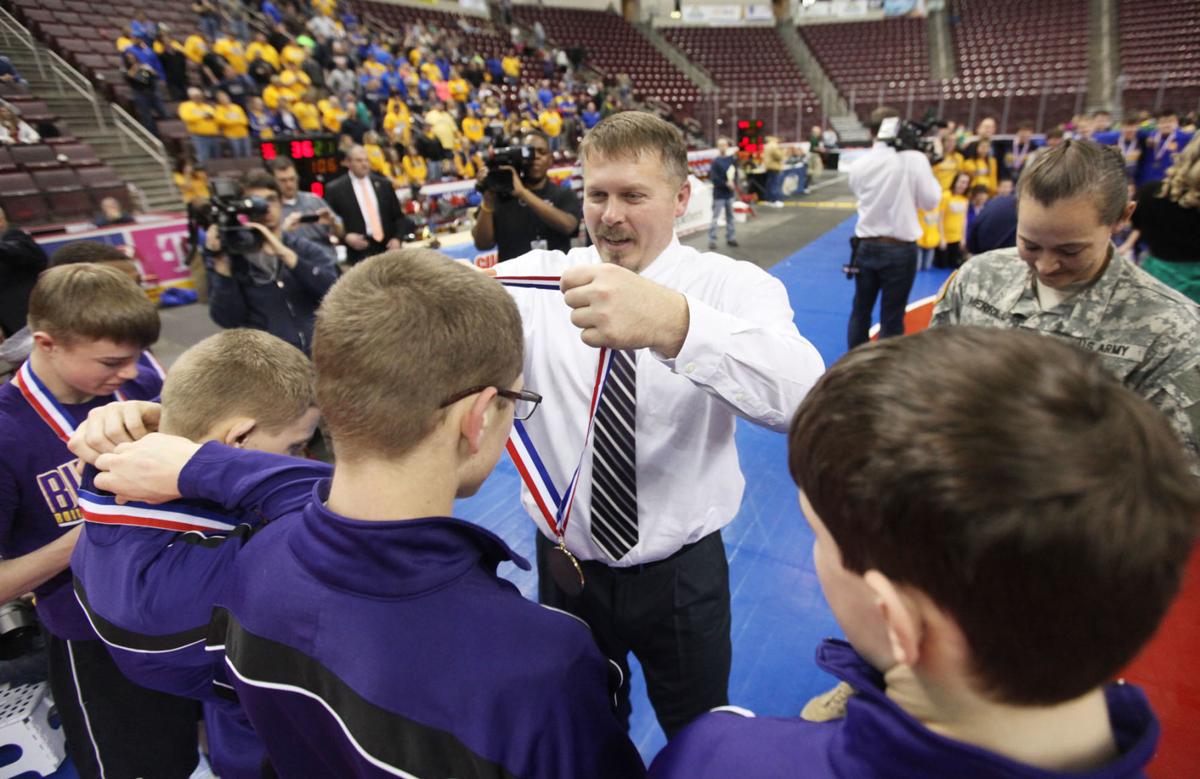 Boiling Springs head coach Rodney Wright led the Bubblers to a state championship in 2015. The Bubblers were one of District 3's best programs in the last decade. 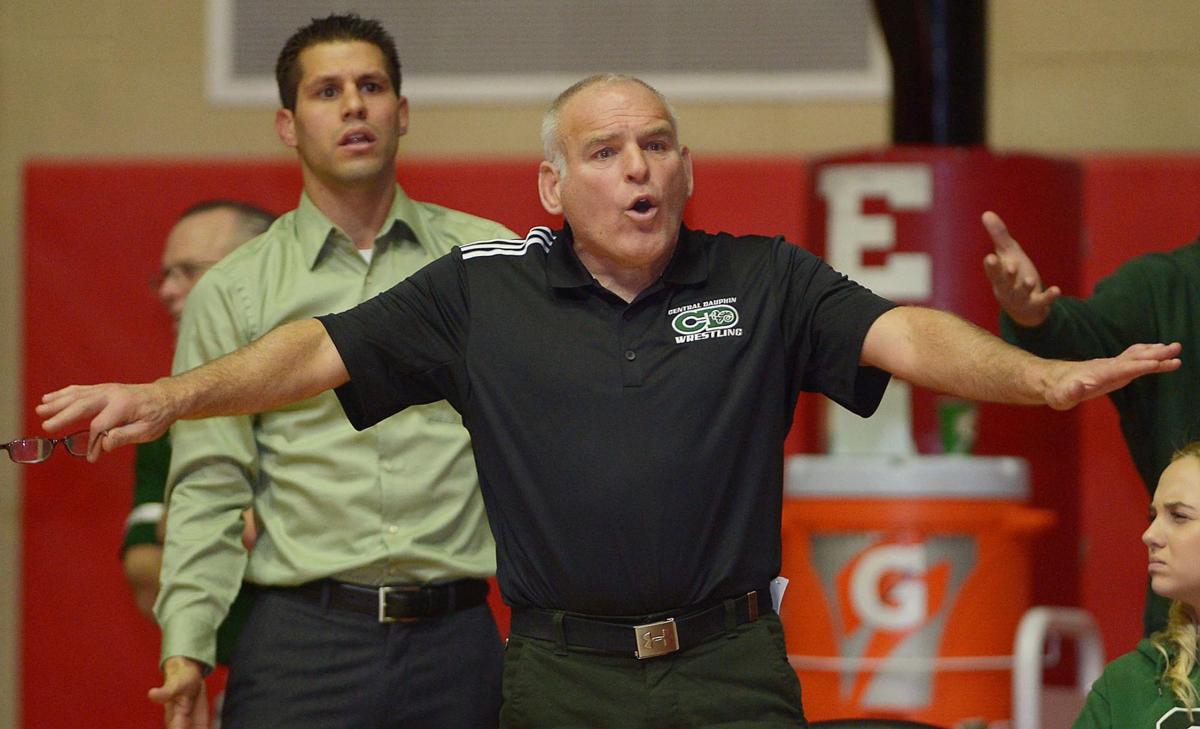 Central Dauphin head coach Jeff Sweigard led the Rams on a run of PIAA dominance from 2008 to 2014 that has rarely been seen from District 3 teams.

There is no one way to build a successful high school wrestling program.

It takes multiple parts, starting with a strong youth feeder program and continues with middle school and club teams that keep wrestlers coming back. Devoted coaches who can tap into how to best reach their wrestlers also matters a great deal.

District 3 has a few perennial powerhouses. Schools like Cumberland Valley and Central Dauphin have been at the top of the food chain in Class 3A with their massive pools of talent, but even smaller schools like Boiling Springs, in 2A over most of the past 20 years, have turned out district and state champions.

“The ones that are best and consistently best are nurtured. When I say nurtured I’m talking about everybody pulling in the same direction,” said Joe Tuscano, a wrestling reporter with the Washington Observer-Reporter. “Not only the coaches and the wrestlers, but the fans, the school board and the ability to be able to change with the times. A lot of successful wrestlers come from those sorts of programs and then they move on after their regular wrestling practice and [move on to clubs].”

Building up a varsity program and then sustaining it for years starts by developing a strong youth program that feeds wrestlers into high school.

It serves two purposes — to recruit kids into the sport and keep their interest so the high school team has a full roster, and to establish the standards and culture expected when those wrestlers join the JV and varsity programs. The wrestlers spend time working with each other and with coaches who have been in and know the system by heart.

“First of all, it starts with the bodies. No bodies, no team,” said former Boiling Springs head coach Rodney Wright, the brains behind the Bubblers emergence as one of the state's top 2A programs in the 2010s. “The well’s gotta be full. And that starts at the youth level.”

“Franklin Regional, 15 years ago their program was like they barely had a team,” said Jeff Upson, founder of PAPowerWrestling.com. “Nico Megaludis’s dad, Dan, he really pumped a lot of not only resources, but just time and dedication into building that program up. Franklin Regional definitely benefited from a strong feeder program.”

When done well, feeder programs develop wrestlers to be ready at the highest levels.

“From the very beginning when they start them, and they start them very, very early, all the schools have their youth programs bustling with kids,” Tuscano said. “Then they pass them off to the junior high school and then the junior high schools pass them on to the varsity. And it’s all from those years that you develop, because in wrestling it is extraordinarily difficult to be a good wrestler.

“The successful schools are the ones that have a really strong program and they interact — that’s another key part of it. You’ll see that some schools will bring their youth program up to wrestle before a varsity match, so they can get the feel for what it’s like to be in their gymnasium. Little things like that go a long way to keep a kid interested. And you’re not going to keep all of them, but the good ones you want to make sure you don’t lose.”

Club wrestling ties into it.

It's an area District 3 lags behind, Carlisle head coach Joe Wilson said, with nearly a half dozen clubs competing for wrestlers and splitting up the top talent.

It starts at the top

Take Nazareth, located near Bethlehem, for instance. Aside from feeder programs and the like, Nazareth’s main reason for success has always been head coach Adam Colombo.

“Adam Colombo is a big reason why the program is so good,” Upson said. “The number of state medalists that he has is just insane. The National Wrestling Coaches Association basically sent him around the country to teach people how to be good coaches. He is the poster-man of successful programs, so much that they literally shopped him around and paid him to go around the entire country to put on coaches clinics."

"I want my father to be like him," Allentown Morning Call wrestling reporter Tom Housenick said. "He knows how to raise good, young men, and wrestling is almost secondary."

Or take Canon-McMillan in the Pittsburgh area, which rebuilt in the last few years after a bit of a lull.

“They have it figured out,” Upson said. “They’ve had different coaches — Chris Mary has done very well throughout the years for them when they were battling Central Dauphin, and even when Chris stepped away that didn’t slip down. Jason Cardillo kind of continued it, and now Jeff Havelka is at the helm, and it’s like it never missed a beat.”

Great coaches keep wrestlers in the program and tap into what makes those wrestlers better. Connecting to their athletes is a skill in itself.

“You have to have the kids, and then you have to have good coaches,” Wright said. “If the kids don’t like you, if they don’t buy in it, they’re not gonna run through a wall for you. Those two gotta go hand in hand.”

It's easier for programs with longstanding traditions to maintain their standards.

The Central Dauphins and Nazareths of the wrestling community have history on their side. Wrestlers rising through those programs are indoctrinated and groomed to match what previous generations accomplished, including fathers and their sons.

“Canon-Mac is just — you look at the number of state champions that they have, it’s just a community there,” Upson said. “Wrestling is so big in that area and you have so many people that get invested in wrestling. Wrestling is bigger than football out in Canon-Mac, which is a rare thing, especially in Pennsylvania. When you talk about tradition, there’s just no other school in the state that has a tradition like Canon-Mac does.”

Then there are schools like Reynolds in northwestern Pa., which seems to take particular pride in beating teams despite lacking facilities like other top-notch programs.

“When you talk about blue collar, that’s the most blue collar thing you could do,” Upson said. “You don’t even have a wrestling room and you’re probably one of the best teams in the state, and you don’t even have a wrestling room. They practice in a cafeteria. That’s insane. But, I think they like that because it’s almost like, ‘We’re tough and this is why we’re tough and we do the small things.’"

On paper it may seem easy to build a medal-winning, high-caliber team, but in reality, so much more goes into being the best of the best.

Every team had to start somewhere, and some of them found the perfect formula to make them one of the best. Whether it’s tradition, a coach upholding those traditions or a feeder program lending a hand to creating the best athletes, all of those core aspects are a part of building the foundation for a team.

To build that winning team a club needs a combination of all of them.

Masters of the mat: Determining what teams and districts owned the show during the 2010s in the PIAA wrestling championships

Ever wonder who dominated the top of the medal stands during the 2010s? Find out which wrestling teams were the best of the best with our interactive charts.

A new initiative aims to increase the number of high school girls wrestling programs and get the sport sanctioned by the PIAA.

The PIAA wrestling championships start tomorrow. Check out the brackets for each weight class in 3A and 2A competition here:

Patrick DeMark's time away from Hershey's Giant Center allowed the senior to sharpen his skills. Now, he's prepared to take the remainder of the Class 2A bracket head on.

Boiling Springs' talented freshman has work to do after Day 2 exit at states. But head coach Trevor Byers believes it will serve as motivation.

Patrick DeMark is another step closer to the Class 2A final with a win on Friday morning, while Adam Jacob saw his run end in the quarterfinals but stay alive in consolations.

After leaving empty handed each of the last three years, Carlisle's Rafael Portilla will finally leave a state medalist.

Cumberland Valley's Jake Lucas is exactly where he wants to be: the PIAA Class 3A semifinals.

Aiden Lewis will try and become the first Cedar Cliff wrestler to win a state title since 2004 in Saturday's Class 3A evening bouts, while Jake Lucas and Rafael Portilla will fight for third.

Calling it a trying year, Trinity senior Patrick DeMark added fourth to his 2018 silver medal to close his career.

He's got a second state medal and a shot to wrestling collegiately in California. East Pennsboro senior Adam Jacob is nothing but smiles.

Cedar Cliff's Aiden Lewis now has state silver and fourth in three years. But the sting of the championship loss wasn't easy to overcome Saturday.

Cumberland Valley junior Jake Lucas suffered two losses after regulation by narrow margins Saturday, leaving him with a learning experience he plans to take into his senior year.

'He did what nobody thought he could do': Carlisle senior Rafael Portilla ends agonizing wait with PIAA Class 3A wrestling bronze

For three years, Carlisle's Rafael Portilla left states empty handed. He did not do so in his fourth and final trip.

Boiling Springs head coach Rodney Wright led the Bubblers to a state championship in 2015. The Bubblers were one of District 3's best programs in the last decade.

Central Dauphin head coach Jeff Sweigard led the Rams on a run of PIAA dominance from 2008 to 2014 that has rarely been seen from District 3 teams.