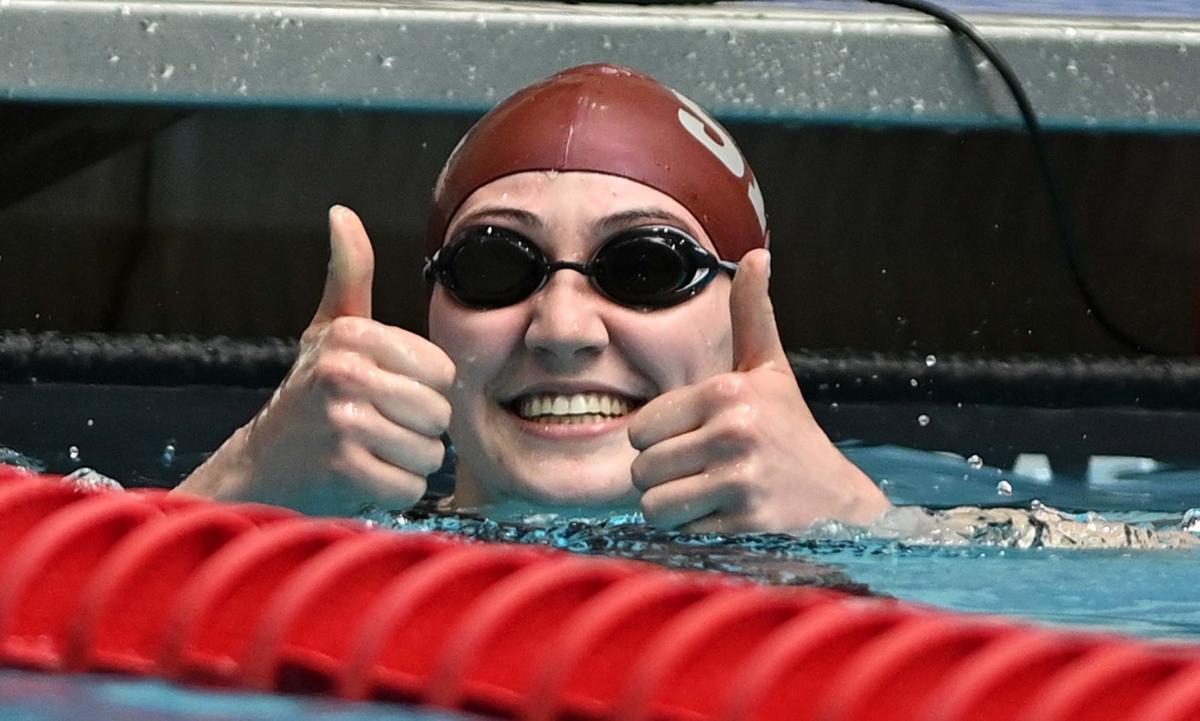 Shippensburg’s Julia Strine smiles and gives the thumbs-up sign to her coaches after swimming a time 1:02.33 in the Girls 100 Yard Breaststroke during the PIAA Class 3A Girls Swimming Championship held Saturday at Cumberland Valley High School. 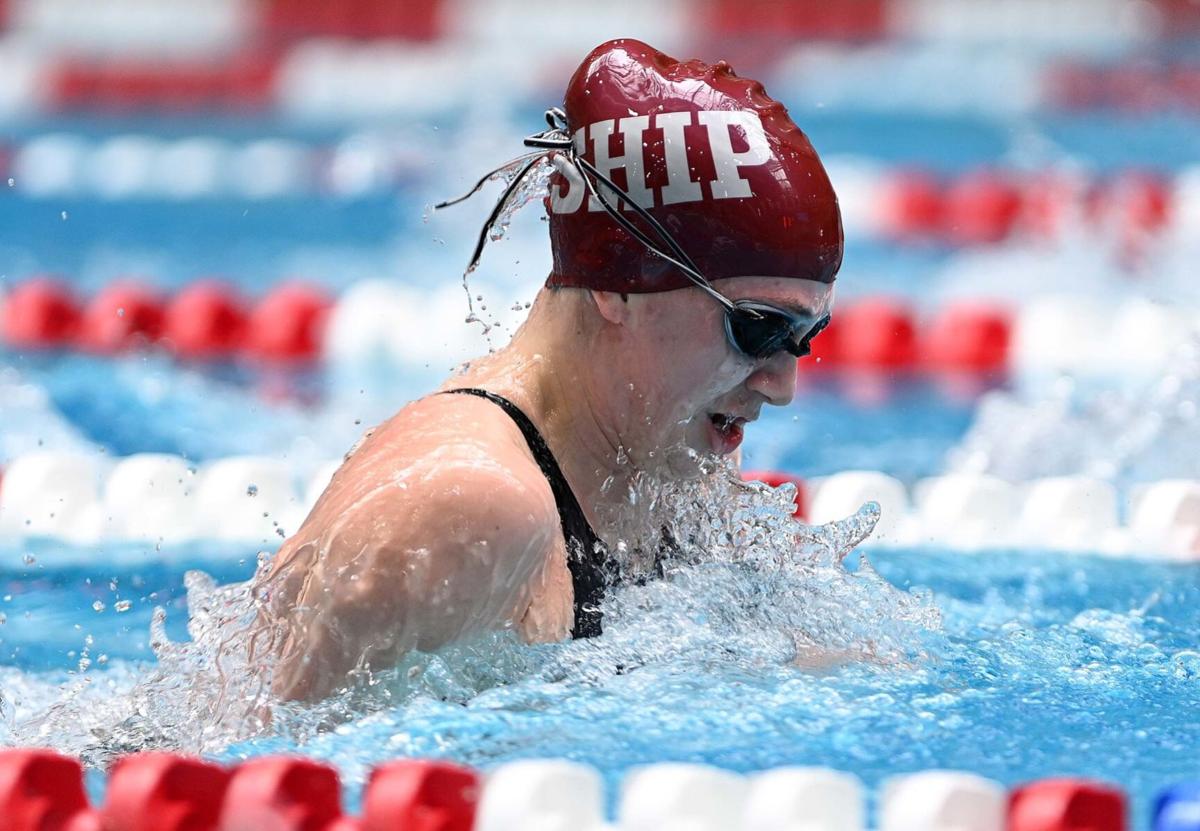 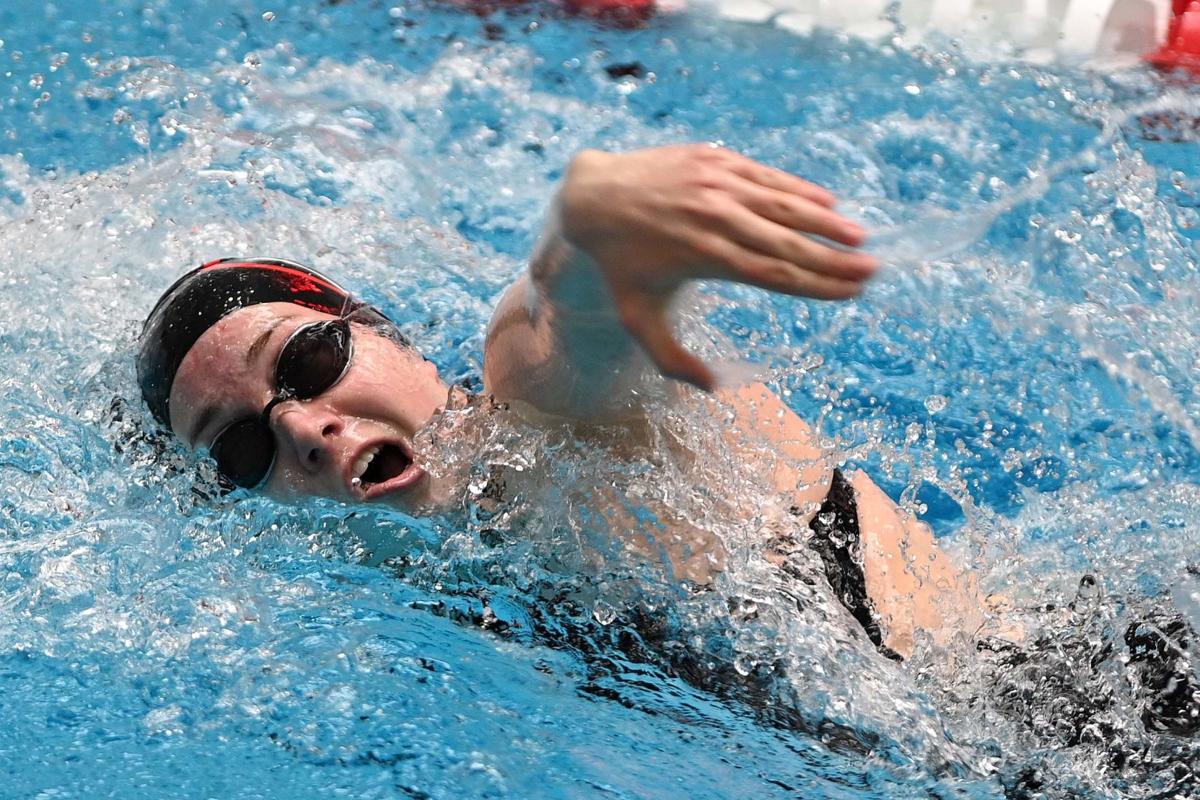 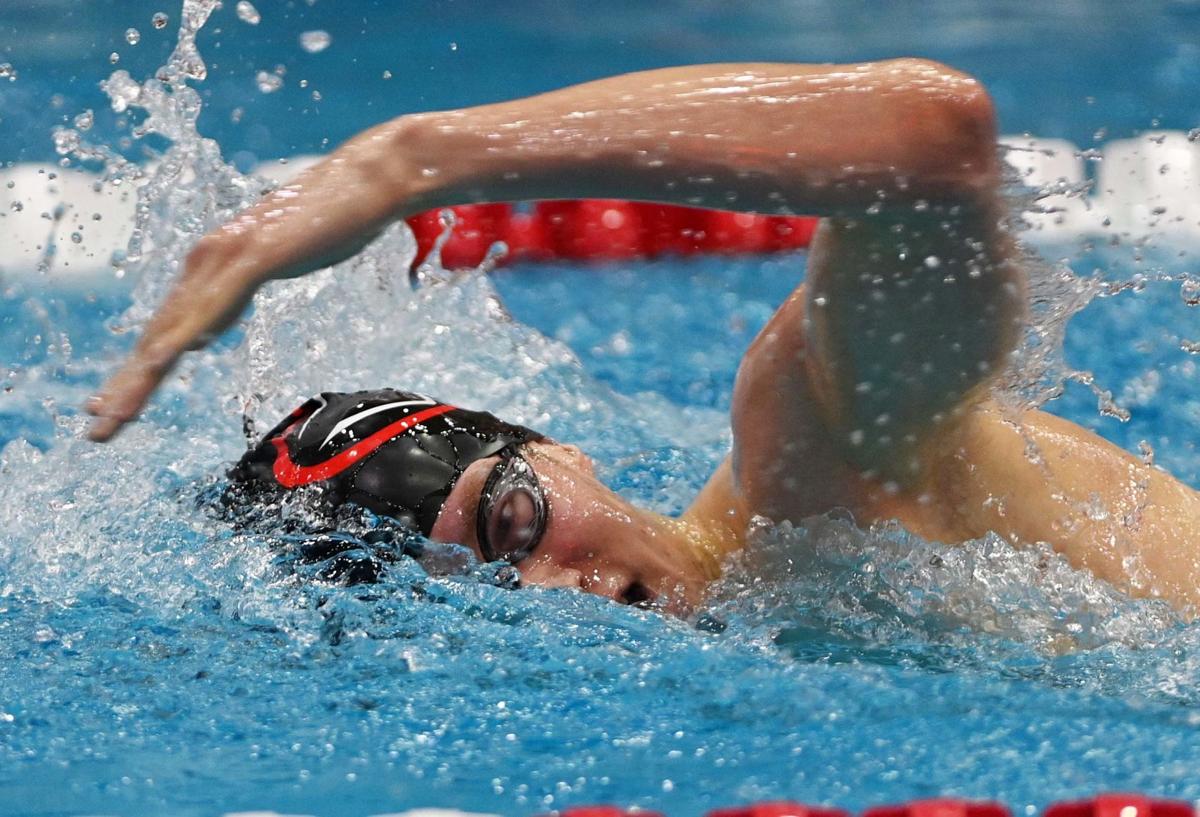 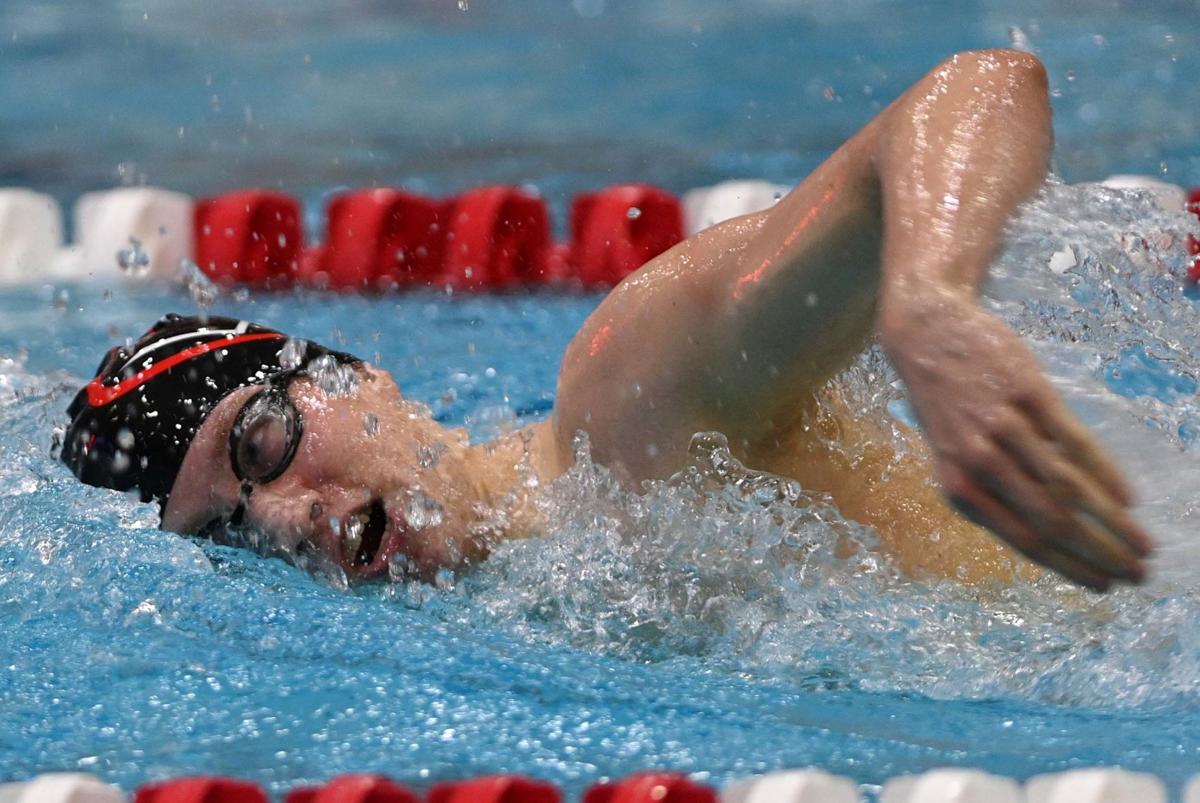 Steve Navaroli For The Sentinel

For a while it looked as if Shippensburg’s Julia Strine would finish second during the 100-yard breaststroke in Saturday’s PIAA Class 3A Swimming Championships.

And that would have been a great way to cap an outstanding high school career.

Yet, Strine wasn’t about to let fellow senior Sydney McCracken, of Kennett, out-do her. Not in the familiar Cumberland Valley pool, where two weeks earlier Strine cruised to a District 3 title.

Trailing after three-of-four lengths, Strine pulled even, then took the lead in the final 20 yards and touched out McCracken for gold by .29 seconds with her time of 1:02.33.

“I could see the girl next to me, I thought we got to the wall at the same time. When I saw that I knew I had to drive the last 25,” Strine said. “That motivated me. I don’t like to lose, so I was giving it my all. I wanted to come out on top.”

Afterward Strine and McCracken congratulated each other saying how much fun they enjoyed racing each other.

Winning gold was a moment Strine looked forward to since coming in seventh place at states as a freshman. It was then she set the goal to be a state champion by her senior year.

Of course, after COVID-19 canceled the 2A state championships one year ago, Shippensburg bumped up to 3A this season, making her task that much more difficult. However, it was a challenge she welcomed wholeheartedly.

“I do well with better competition, too. I really think that was a bigger factor, knowing I had to work really hard to get the place I wanted, the times I wanted. It motivated me knowing I was going to be racing bigger and faster teams.”

Swimming close to home was nice for Strine, who yesterday watched younger sister, Jillian Strine, earn a PIAA medal for Boiling Springs in the 2A competition.

'It was a dream of mine': Driven by work ethic, midseason loss, Big Spring's Matthew Raudabaugh nabs program's first PIAA Class 2A title

“It was really nice to wake up at my house this morning,” she said. “It was just another meet for me. I swim fast in this pool, so it put me in a good mindset going into the meet.”

Julia Strine admitted that it is hard to believe her high school career is done, but she looks forward to heading to swim at Ohio University in the fall.

“I am grateful for the opportunity the PIAA gave us this year,” she said. “I am thankful for my school, my team and my family. I am really excited and proud to be able to represent my school the way I did.”

This included senior Tyler Distenfeld, who made the most of his final high school swim, winning the first heat of the 500 free in 4:36.19. The terrific swim earned Distenfeld a sixth-place medal.

“The last two weeks he practiced in that lane, and he was really dialed it,” Eagles head coach Mike Gobrecht said of Distenfeld. “He was like, ‘This is it.’ And he made the most of it.”

“Even though the state meet was in our own pool, there were no spectators and there still is that internal nervousness,” he said. “Jennifer came back in her 100 free and did well.

“Kamryn is young, and managing emotions is tough sometimes. But we ended the day, everyone was fine and ready to come back.”

The school certainly pulled off hosting the fastest swimmers in a championship meet.

“It was a group effort,” Gobrecht said. “CV has a great relationship with the PIAA. We had the space, everything worked out. It was a matter of our athletic staff, administration and people saying we wanted to do a first-class effort with that.”

2020-21 Girls Swimming and Diving All-Sentinel Team: Shippensburg's Julia Strine goes out on top as state champ, Swimmer of the Year

Shippensburg's Julia Strine laid down the hammer in her final season, winning Mid-Penn, District 3 and PIAA 100 breaststroke titles. Find out where other locals landed on this year's All-Sentinel team.

Matthew Raudabaugh ended Big Spring's long state championship drought. The PIAA gold medalist is our Swimmer of the Year. Find out where other locals landed on this year's All-Sentinel team.

Shippensburg’s Julia Strine smiles and gives the thumbs-up sign to her coaches after swimming a time 1:02.33 in the Girls 100 Yard Breaststroke during the PIAA Class 3A Girls Swimming Championship held Saturday at Cumberland Valley High School.