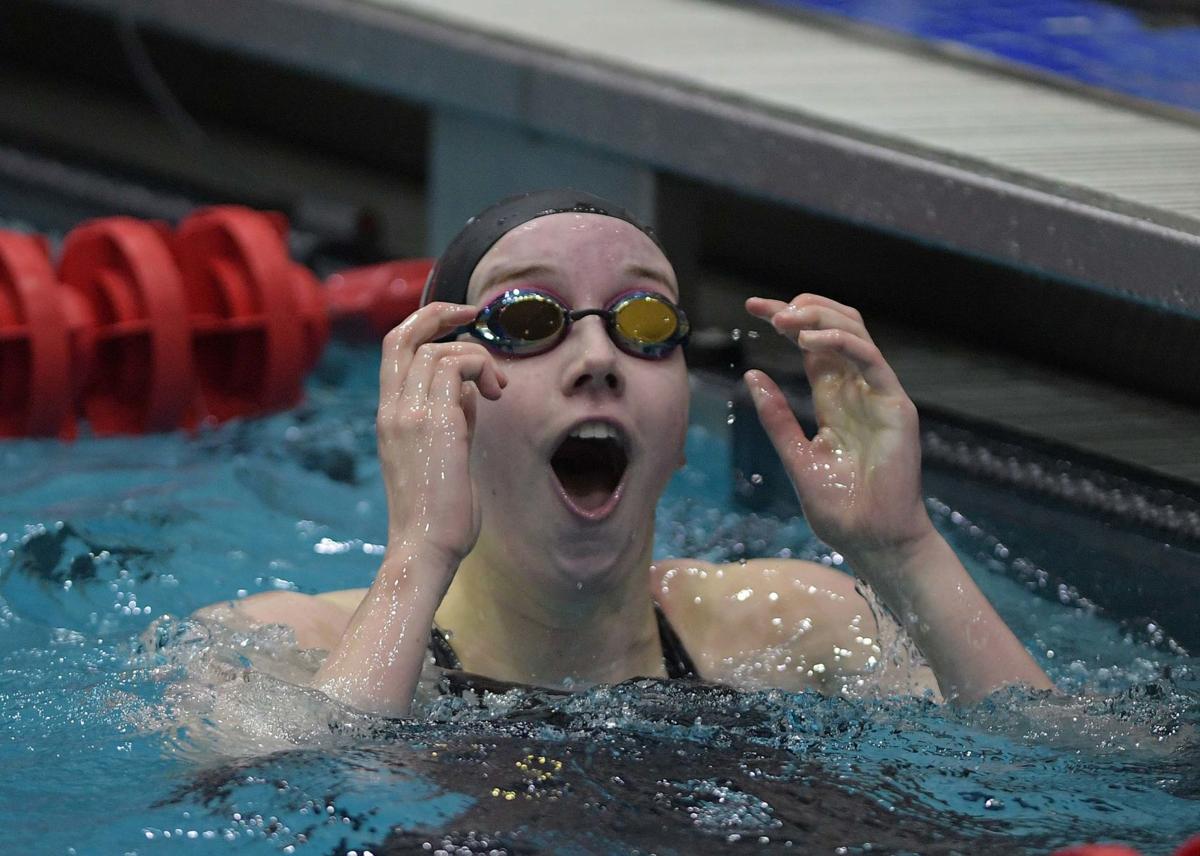 Cumberland Valley’s Carolyn Bolden smiles as she sees her time of 1:52.11 in the Girls 200 Yard Freestyle during Heat 4 of the District 3 Girls AAA Championships at Cumberland Valley High School Friday. 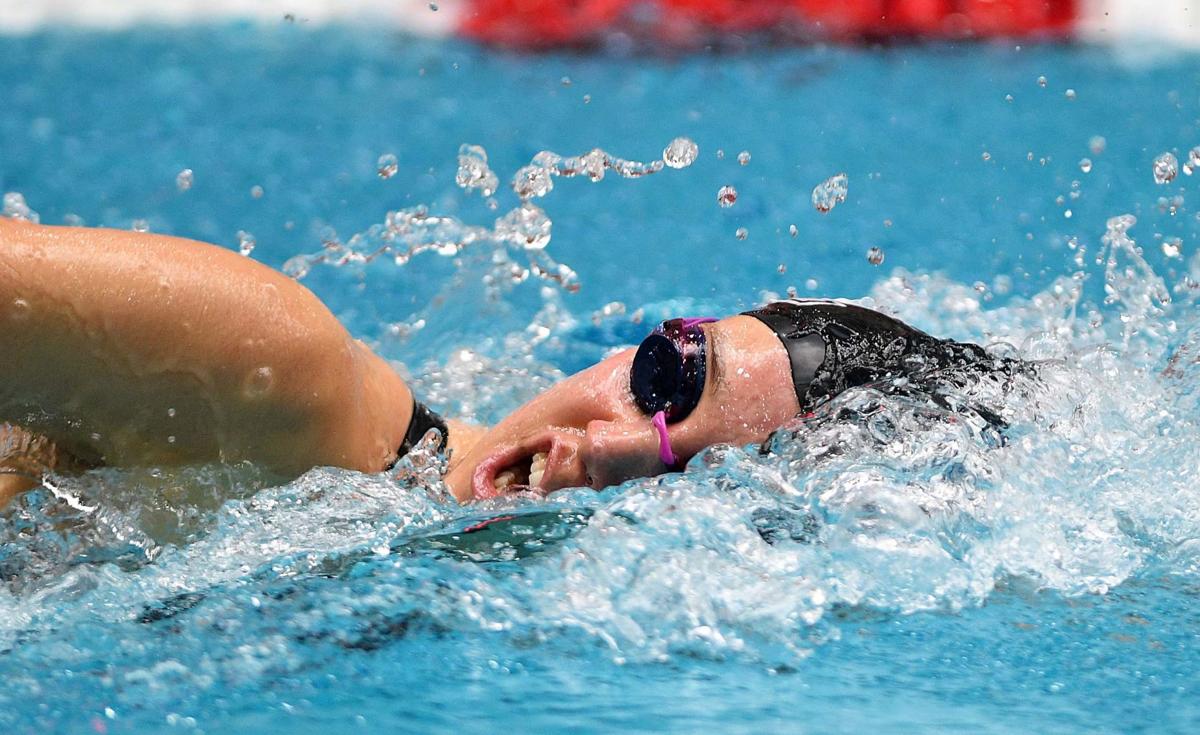 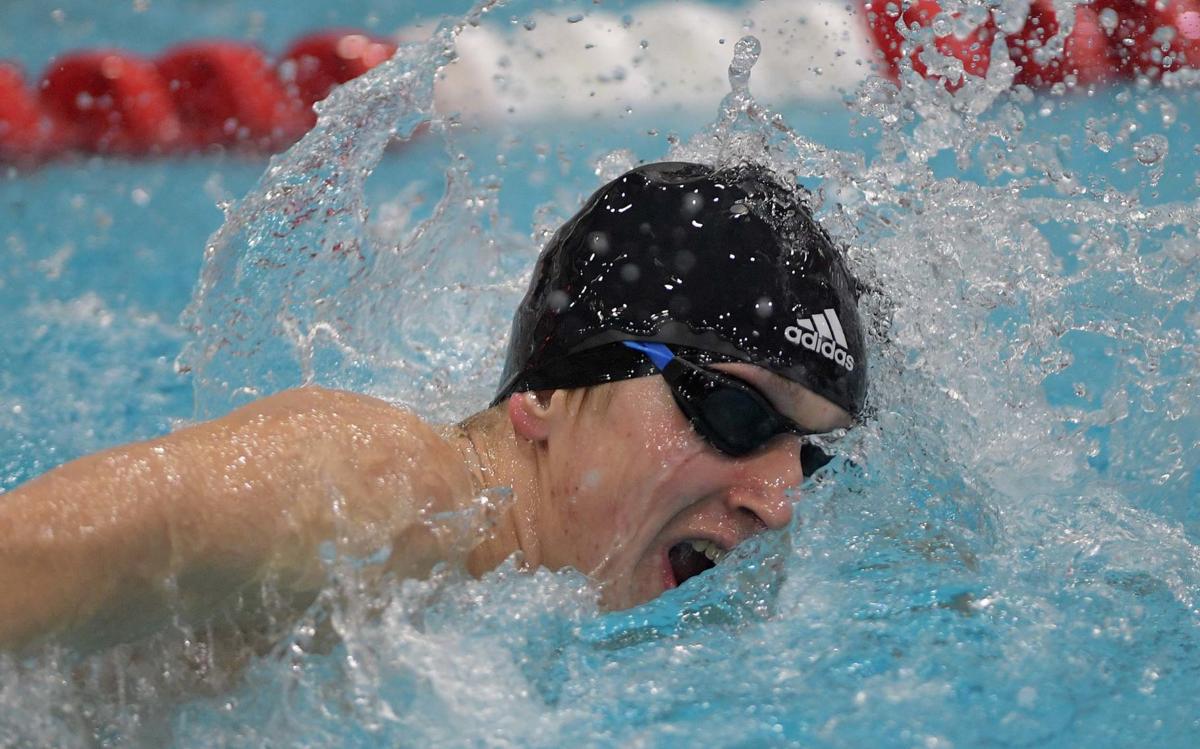 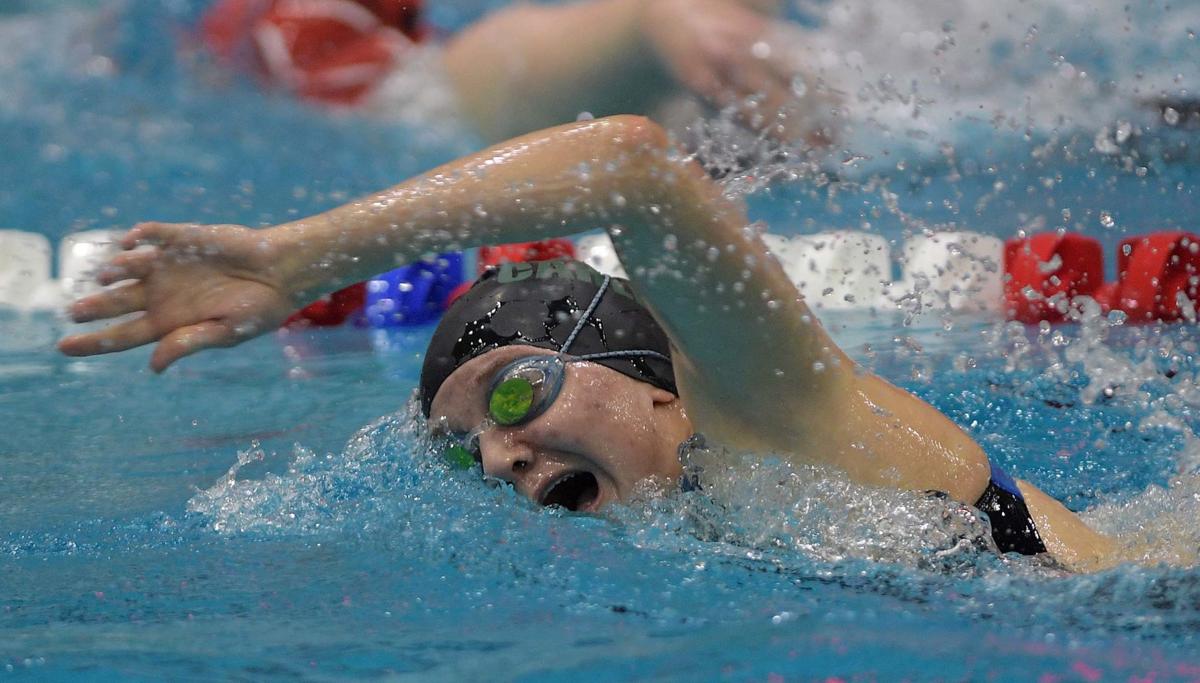 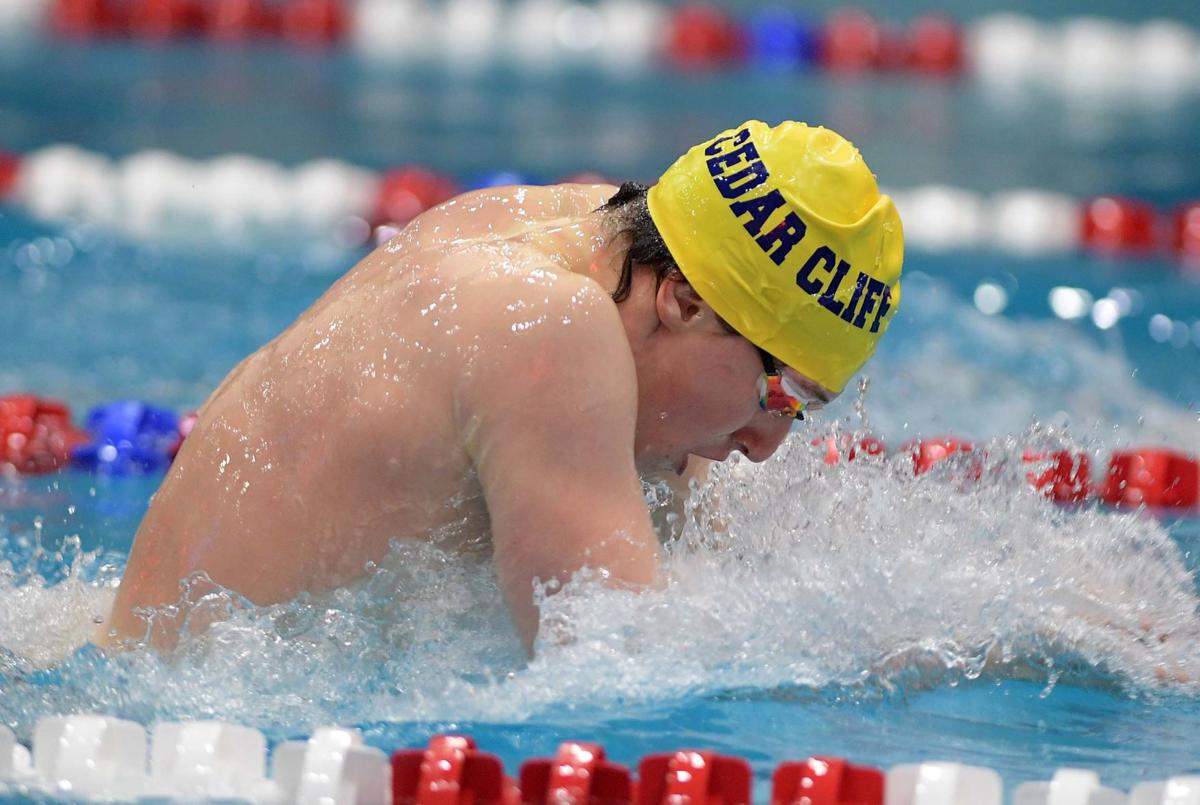 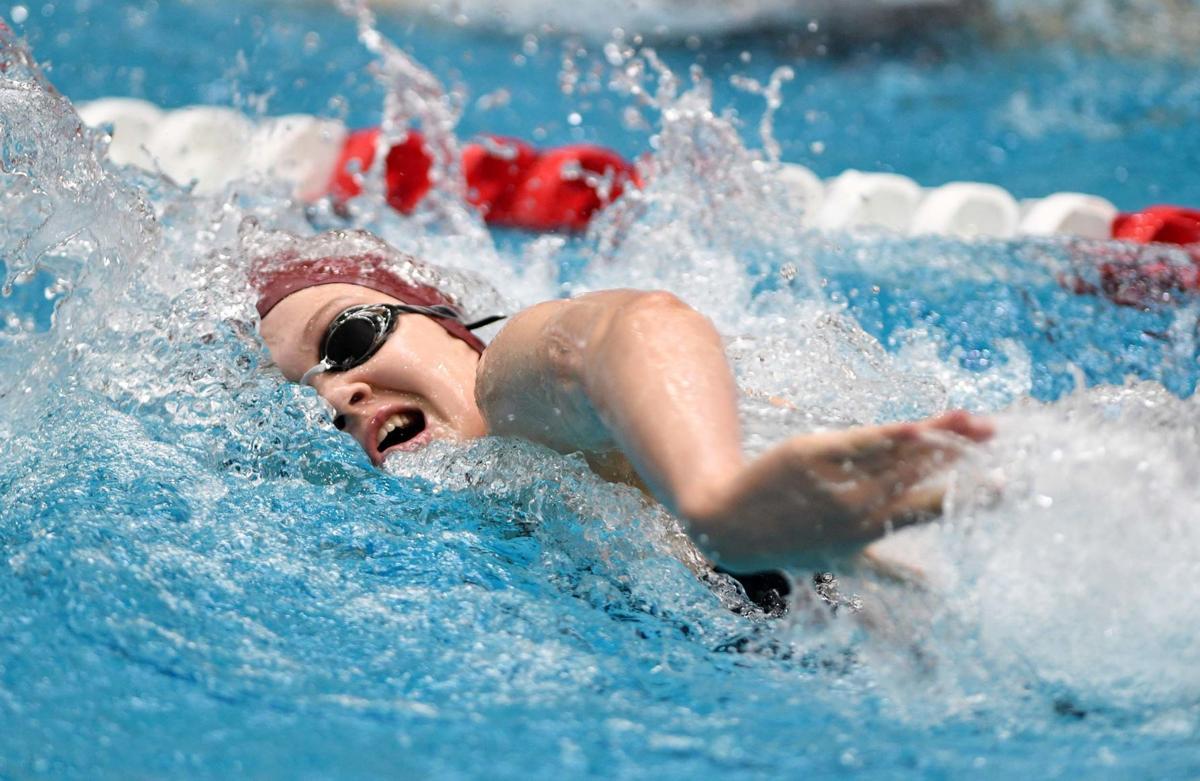 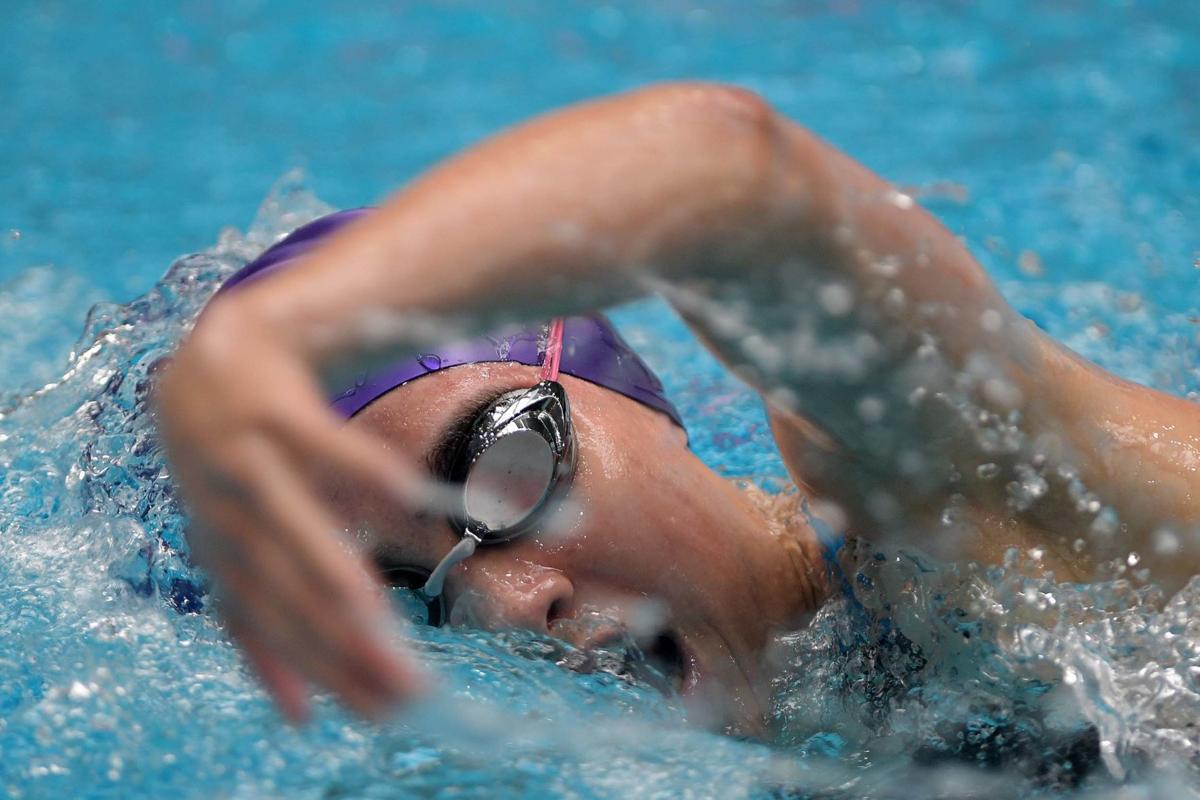 During Saturday’s District 3 Class 3A swimming championships, Skiles proved to have made the right move.

“It was fun. I was happy with changing back to the 50 this year from when I did it freshman year,” he said. “This year was me getting the metal part of the 50 down. With the 50, if anything goes wrong you are done because it’s so quick.

“I took an extra stroke at the very end of that race and it was so close.”

Skiles was able to touch out Carlisle senior Isaiah Bell, who finished second in 21.02, as his workout routine is paying off. He swam the final race of the day with teammates Wade Turlington, Kyle Farrow and Tyler Distenfeld and placed fourth in the 200 free relay.

“This year was the first year my 50 has got where I wanted,” said Skiles. “I started working out a lot more than in past years and I definitely felt the changes.”

Turlington was fourth in the 200 free.

Kate Luft didn’t have time to be tired or disappointed early in Friday’s District 3 Class 2A girls swimming championships at Cumberland Valley.

Luft and her 200 medley relay teammates Evangeline Soerens, Dahna Yoon and Jackie Brettschneider swam a district record-breaking time of 1:47.81, only to come in second to Schuylkill Valley (1:46.77).

Of course, Luft had to swim in the next event, the 200 free, and her performance was spectacular as her time of 1:49.97 earned her a gold medal in a staggering margin of 5.44 seconds.

“I think some of the girls were disappointed,” Luft said. “But the most important thing is we were a whole second faster that we were and broke our school record. We all had amazing splits.”

A year after she won the district 200 individual medley gold, Luft changed it up — at least event-wise, but not results.

“I am pleased with the time, especially with having just swam 10 minutes before,” she said. “I think there is room for improvement at states. I love to be pushed by people.”

The Trinity boys earned a bronze medal in the 200 medley relay with Nick Shelly, Scott Majka, Tommy Chase and Rece Shelly getting hardware.

Majka also placed third in the individual medley, as did Shelly in the 50 free.

For more photos from the first day of the district swimming championships, go to cumberlink.com/sports

Athletes of the Week

Throughout the 2018-19 high school sports season, we will name a weekly Sentinel Athlete of the Week every week highlighting the on-field perf…

Cumberland Valley’s Carolyn Bolden smiles as she sees her time of 1:52.11 in the Girls 200 Yard Freestyle during Heat 4 of the District 3 Girls AAA Championships at Cumberland Valley High School Friday.