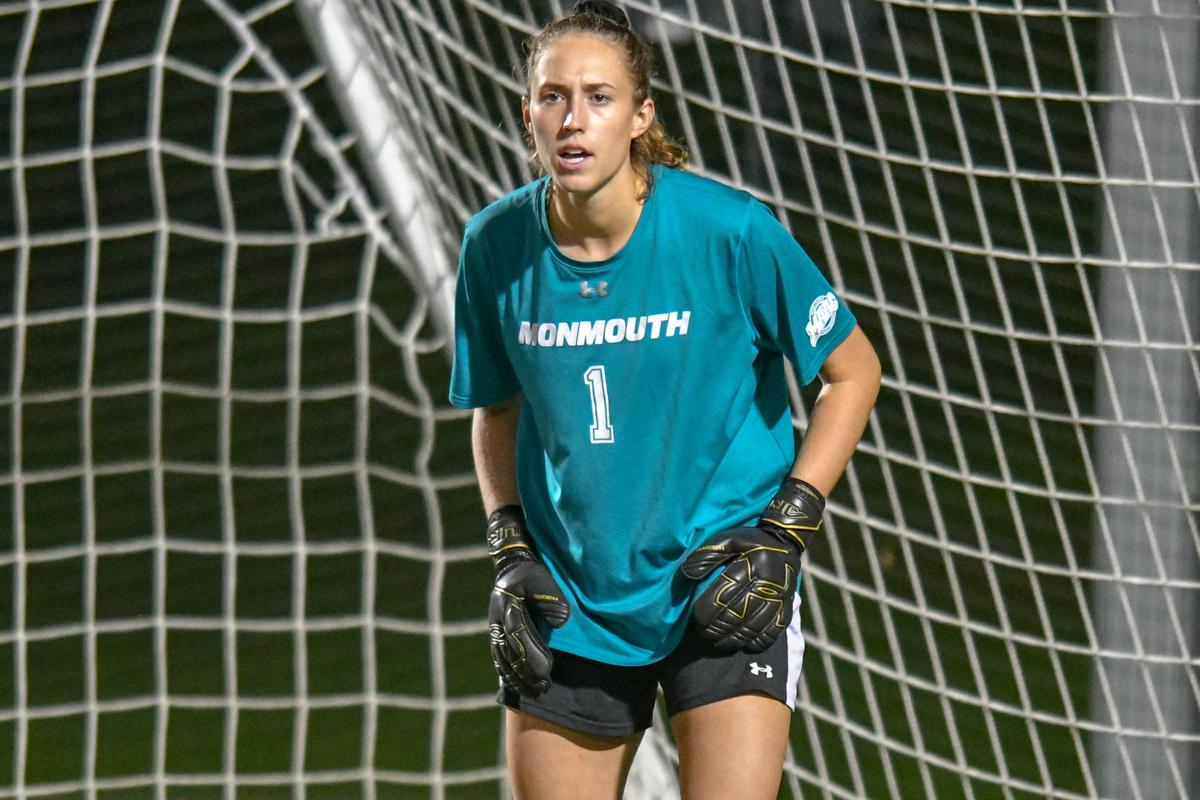 Amanda Knaub has played in goal in nearly every game during her first three years at Monmouth University. 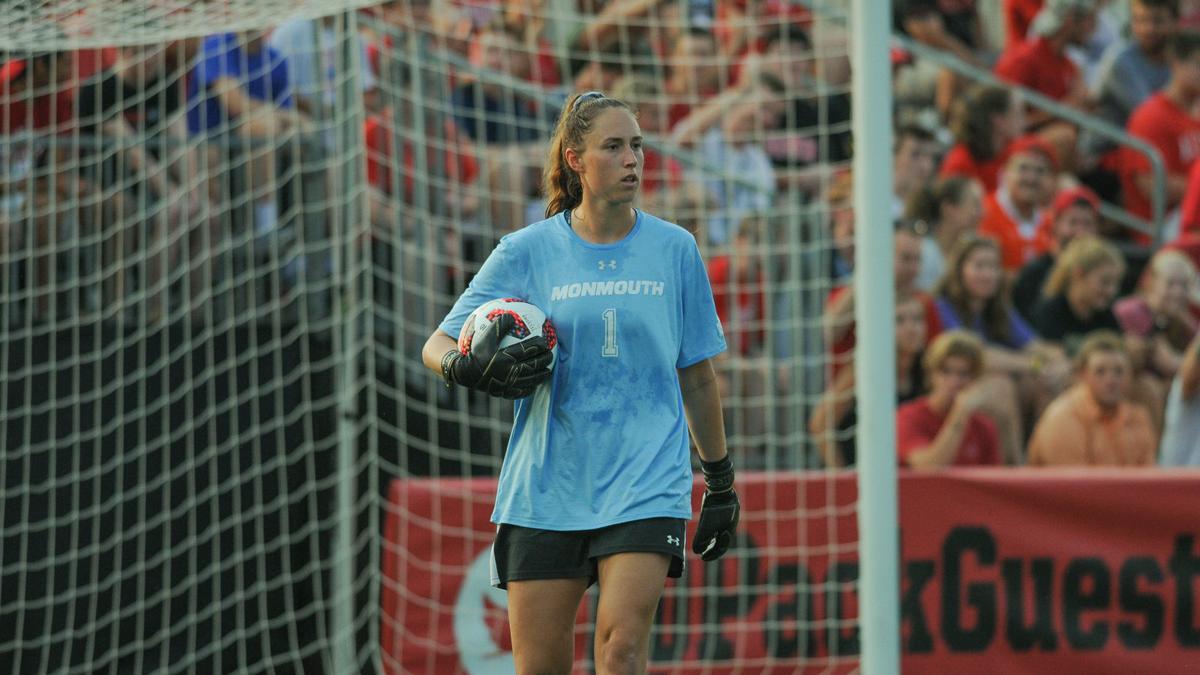 Trinity grad Amanda Knaub has allowed less than half a goal per game since joining Monmouth. 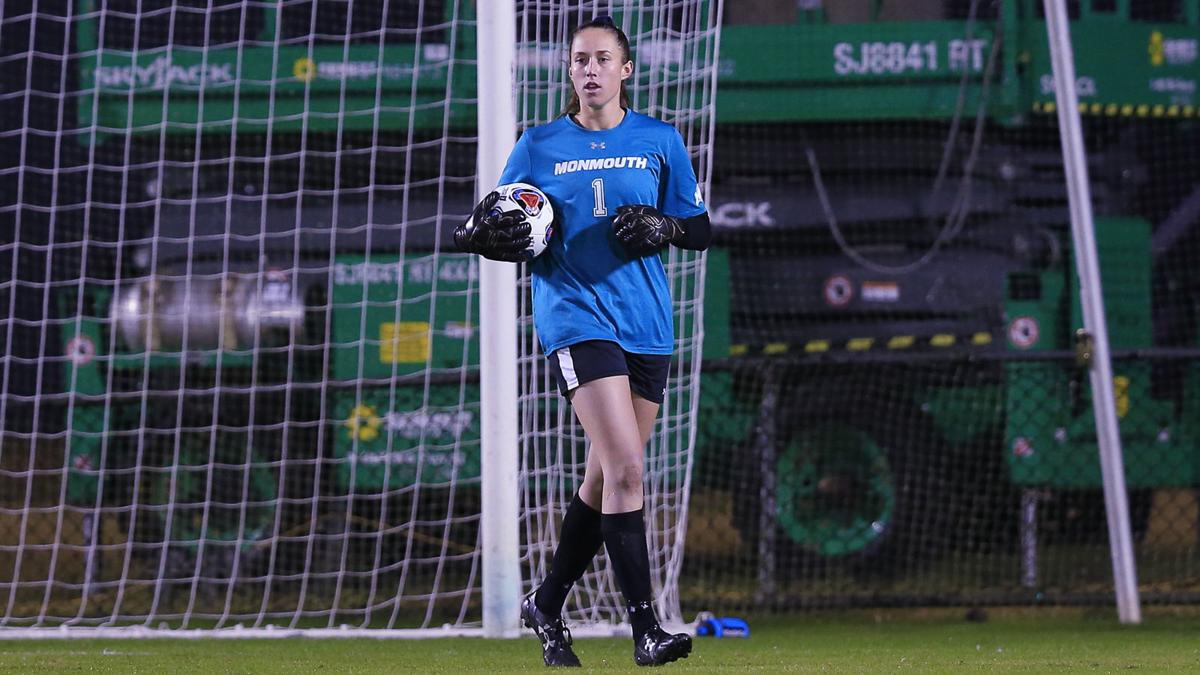 Senior goalie Amanda Knaub and her Monmouth teammates were picked this preseason to win the conference title once again.

Amanda Knaub got quite a challenge early in her collegiate soccer career at Monmouth University.

As it turns out, that push is exactly what the Trinity grad needed.

Outstanding while backstopping the Shamrocks to three District 3 Class 1A championships and a pair of PIAA soccer titles, Knaub simply hoped to get playing time as a freshman goalkeeper at Monmouth.

However, that was not good enough for Hawks coach Dr. Krissy Turner.

“Normally, I let players choose their individual goals, and I gave it back to her and was like, ‘This is not acceptable’” Turner said. “I made her fix it because I’m like, ‘We all have the confidence in you that you need to have.’”

While it may seem harsh, Turner’s words struck a chord with Knaub. In fact, three years later, Knaub credits her coach with being a difference maker.

“Then coming here, it was such a big change going to the Division I-level school that has a very good upcoming program. It was hard as probably some of the hardest challenges in my life.

“But I am so grateful that she was able to do this for me because if she wouldn’t have done it, I don’t think I would be here. I don’t think I’d be where I am today.”

With Knaub allowing less than half a goal per game throughout her three years at Monmouth, the Hawks have won the last three MAAC regular season and tournament championships.

Last season she played in all 21 games, with 20 starts, boasting a 16-4-1 record with a league-leading 10 shutouts. Her 0.44 goals against average and nine goals allowed were tops in the conference.

Turner said there is much more to the position than stopping the ball, and Knaub has become exceptional at all aspects of the position, including ball control and distribution.

“We also wanted her to be the start of the attack, and that’s definitely something that has grown and improved in her game,” the coach said. “It’s something that she spent a lot of time working on, and improving and understanding how important it is to be a goalkeeper who can play with your feet and do it well. She even has a left foot and doesn’t have two right feet anymore.”

With a drop-kick that can reach 55-60 yards, Knaub has become a big weapon for the Hawks.

A 6-feet, Knaub is a tall keeper, which she admits helps. Still, there was much more to adapting her game to college.

“It helps out because there’s some balls that I can get to that obviously some shorter keepers can’t,” she said. “I still have to train and work on everything else that goalkeepers do. I just have a few extra inches over some people.”

An all-star softball player while at Trinity as well, where she still holds several school batting records, athleticism has never been an issue for Knaub.

Of course, she laughed when asked what her toughest adjustment to collegiate soccer was.

“Honestly, the running,” she said. “[Coach] bases our program on fitness, and a lot of our teammates are very fit. Last year we played NC State, and they were, I think, were ranked like 16 or 18. At the time when we played them, coach drilled in us, ‘They may have national players on their team, they may be some of the most skilled girls, but you guys can keep up with them.’

“We ran circles around them, the entire game. If we can’t match the team skill-wise, we can keep up with them fitness-wise. I’m not very big on being the strongest runner. I’ve come a long way.”

About to begin her senior season, Knaub — who was recently named to the Preaseason All-MAAC Team while conferences coaches unanimously picked the Hawks to again win the championship — is also ready to take on a leadership role, grooming a pair of freshmen that arrived at Monmouth.

“These two are in the same position I was, and I can see it’s a little daunting,” she said. “I’ve been trying to help them out and give them some pointers, because I know how scary it is, and I know how hard it is to go from high school to college.”

Another area that Knaub excels is the classroom. A criminal justice major with a minor in security, she had a 3.99 GPA last year. Her career goal is to work in some form of counter-terrorism, and her internship sparked that desire.

“I got to work with some FBI agents, some homeland security agents, so it was a really good experience,” she said. “I’m doing a fifth year to get my masters here at Monmouth, hopefully after that I can work on getting a job in some form of law enforcement and kind of work my way up.”

It’ll be her next challenge to conquer.

Our college athlete series, Catching Up With ..., continues with half of the two-headed Trinity pair that kickstarted the Shamrocks' current run of six-straight District 3 titles: DeSales forward Timmy Edwards.

Our college athlete series, Catching Up With ..., follows up last week's feature on Timmy Edwards with his partner in crime at Trinity, Pace junior guard Austin Gilbertson.

Amanda Knaub has played in goal in nearly every game during her first three years at Monmouth University.

Trinity grad Amanda Knaub has allowed less than half a goal per game since joining Monmouth.

Senior goalie Amanda Knaub and her Monmouth teammates were picked this preseason to win the conference title once again.