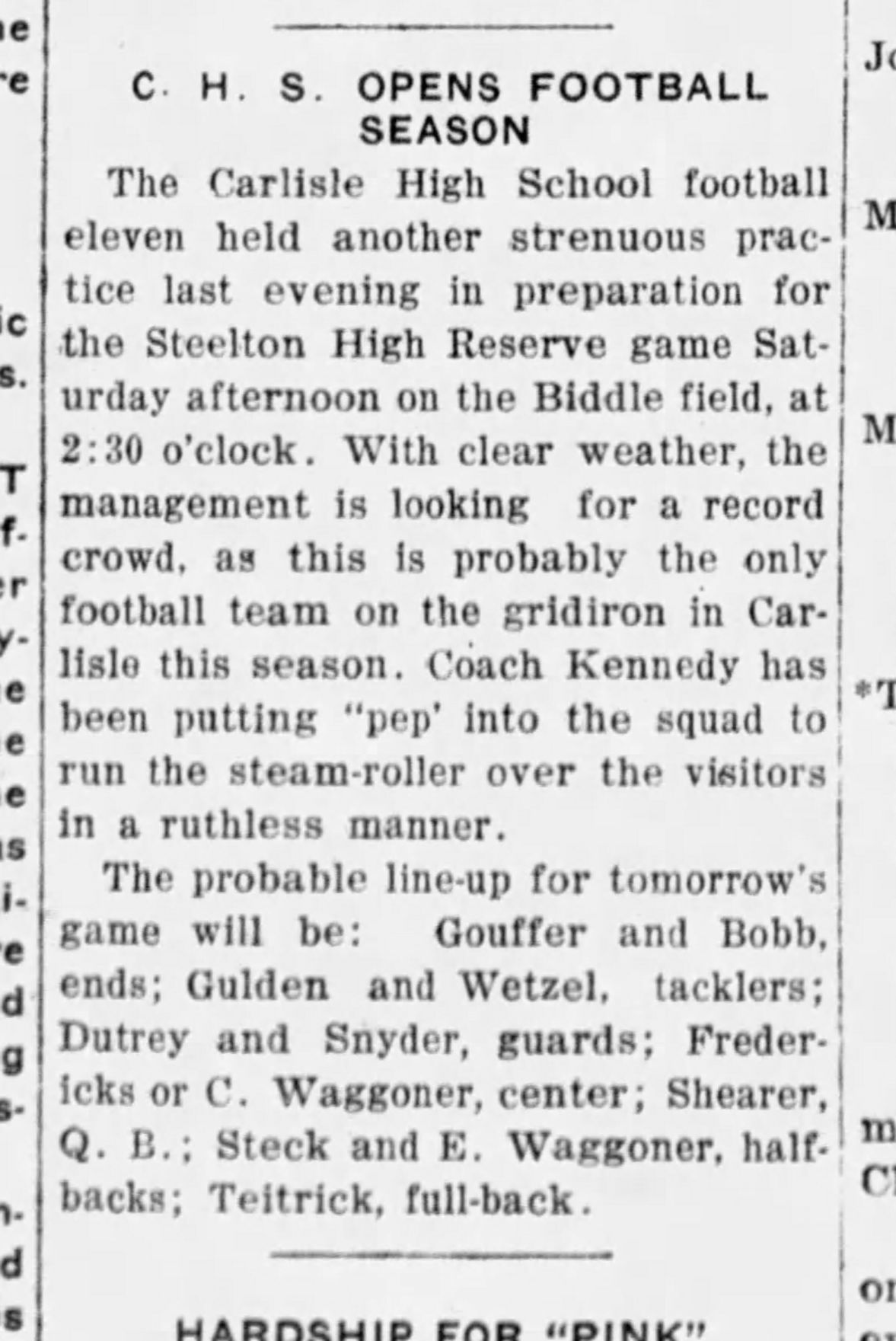 A Sentinel story Oct. 4, 1918 on the upcoming Carlisle football season.

A Sentinel story Oct. 8, 1918 on the latest updates of the pandemic in Carlisle.

A Sentinel story Oct. 14, 1918 on Dickinson football preparing for an abbreviated season due to the "flu." 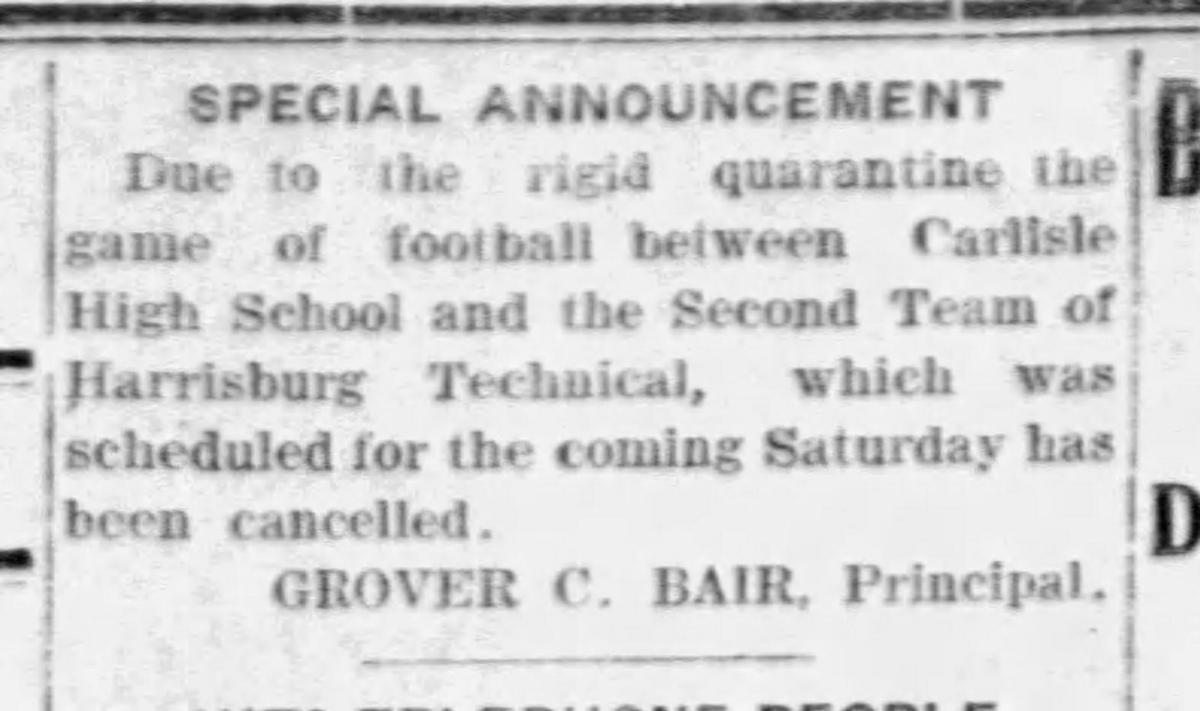 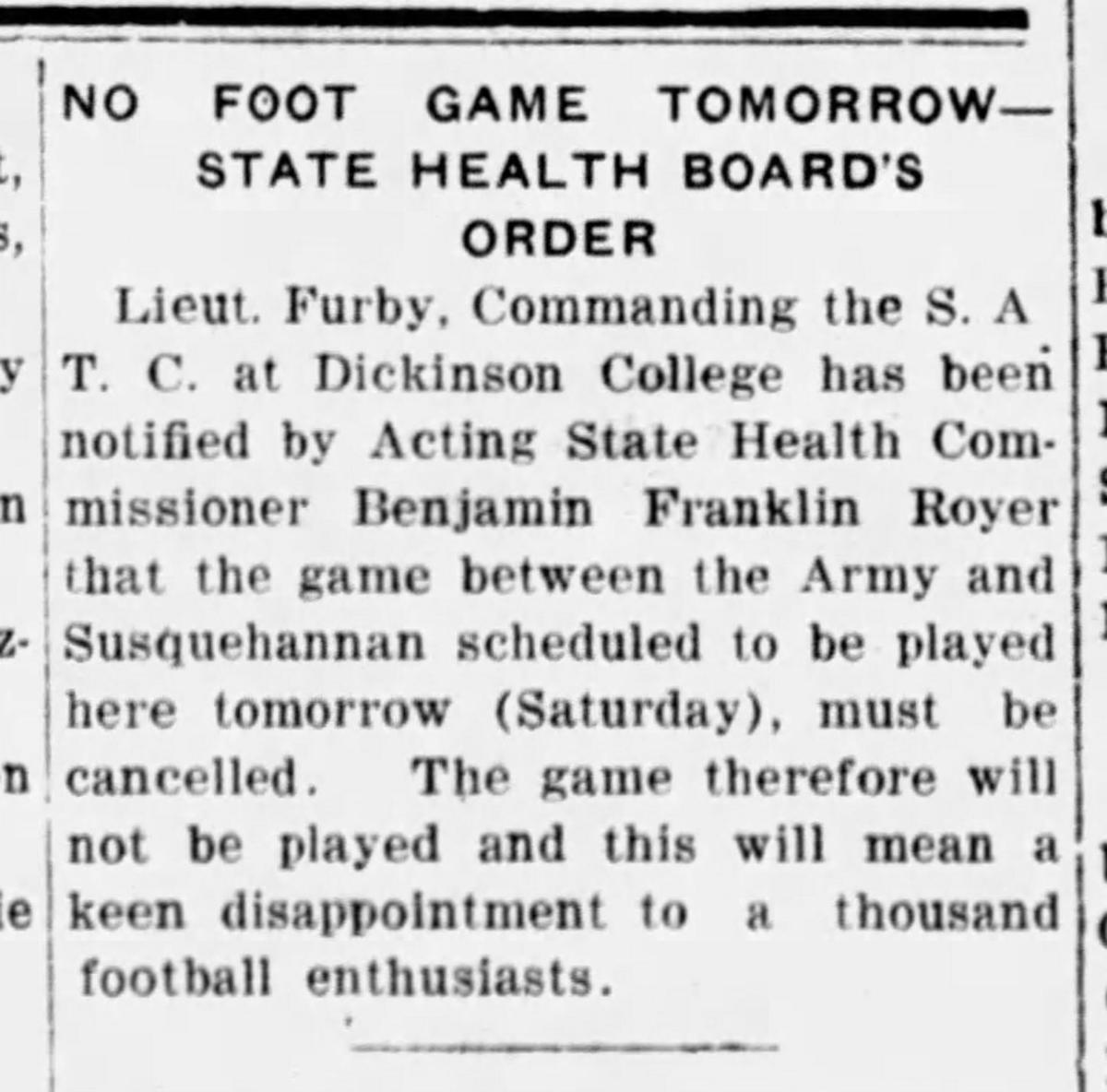 A Sentinel story Nov. 1, 1918 reporting a college football game between Army and Susquehanna is cancelled. 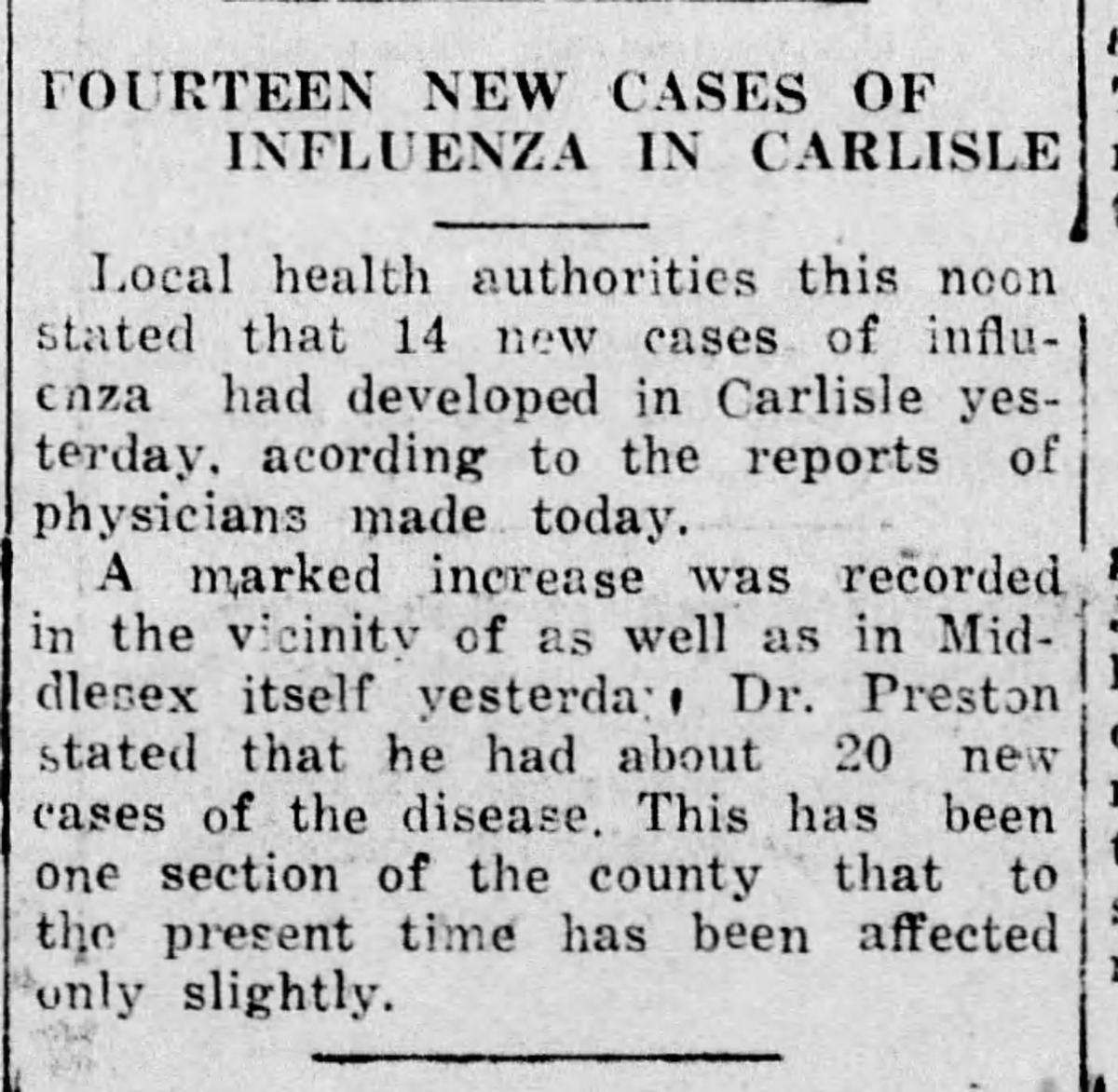 A Sentinel story Nov. 4, 1918 on the latest number of reported influenza cases in Carlisle. 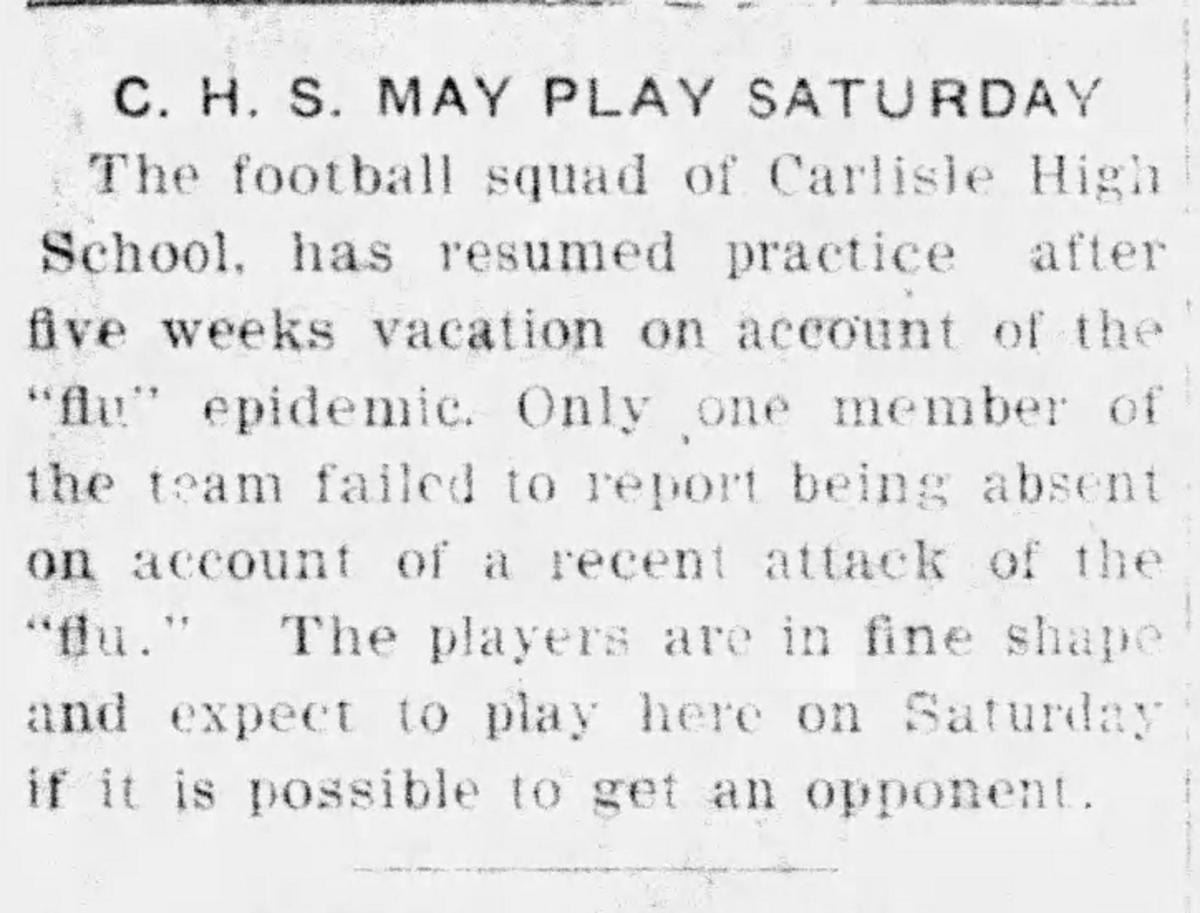 A Sentinel story Nov. 7, 1918 reporting Carlisle football has resumed practice after a month off due to the pandemic. 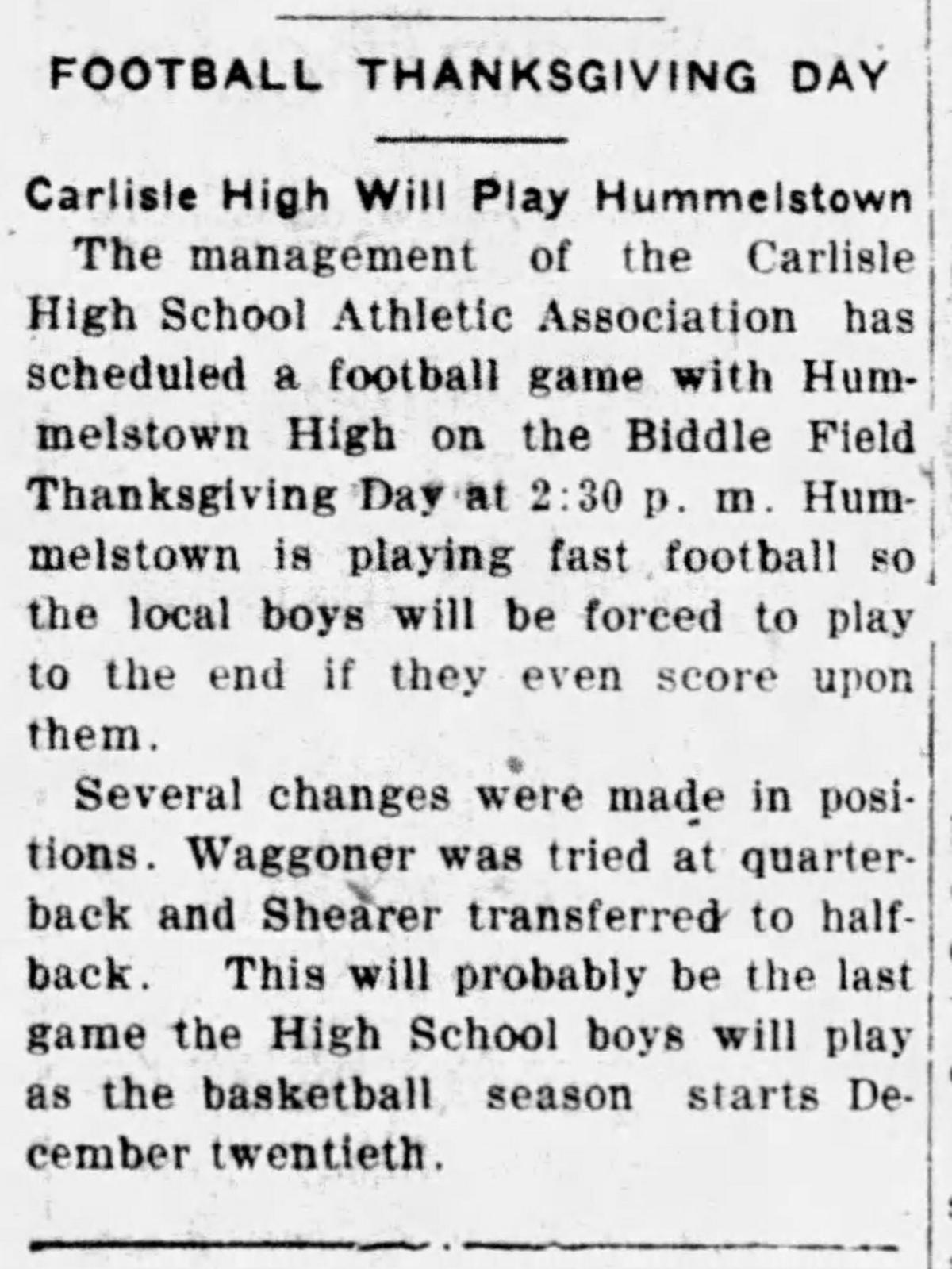 The next part won’t be so easy.

It was a simple choice when sports shut down globally in March because COVID-19 had devastated parts of China and Italy and the virus started to take off in the United States.

It was a no-brainer. Large groups are the perfect way for the virus to spread and few events attract more crowds than sports, especially pro and college sports.

But now comes the hard part — when and in what form can we all return to play.

The rush to return: How Pennsylvania’s reopening plan for high school sports compares to other states

If history has anything to tell us, it’s that it won’t be easy, it won’t be smooth and it won’t look anything like a normal season.

As we inch closer to the return of high school football, soccer and the rest of the PIAA calendar this fall, the history books and newspaper archives provide at least a glimpse of what our sports future might look like.

Take a step back in this written time machine. The year is 1918.

World War I was drawing to a close. Baseball was absolutely America’s pastime. Jim Thorpe was a two-time Olympic gold medalist two years away from joining the newborn NFL. The Carlisle Indian Industrial School closed for good.

And the 1918 influenza ravaged the world; it would eventually kill 50 million people globally, 675,000 of them in the United States.

The devastation, likely set into hyperdrive by the war, forced towns, counties and states to shut down businesses, schools and churches. Sounds familiar, doesn’t it? People were asked to stay at home — “social distancing” wasn’t a term yet.

Sports were in its infancy at this time, especially at the high school level. Carlisle had a football and basketball team. Mechanicsburg had baseball, with football to join the fold in a year. At the college level, Dickinson also had a football “eleven.”

The worst month of the pandemic in 1918 was October, the heart of football season. The Carlisle Board of Health ordered nearly every building shut down Oct. 4, a day after state Commissioner of Health Dr. B.F. Royer ordered the same across the commonwealth.

District 3's chairman on having fall sports: 'We do not have that answer' at this time

PIAA will allow offseason workouts in counties given go-ahead by state, health officials

Carlisle football — before it would earn the nickname Thundering Herd — had “five weeks vacation” according to a Nov. 7, 1918, article in The Sentinel, last playing Steelton High to a 6-6 tie with “wonderful pep” Oct. 6.

One of the postponed games was against “the Second Team of Harrisburg Technical” in mid-October. When Carlisle did return, it didn’t have an opponent lined up and was still missing a player from the “flu.”

But the sports scene — especially after the Carlisle Indian Industrial School closed months prior and the football team, one of the nation’s best in the early 1900s, was disbanded — was fledgling.

Now, on a national level, the toll the virus took on college football was significant. According to the Athletic, only 87 college football games were played by November 1918. In 1916, ’17 and ’19 the average by that same time was 277. Pop Warner led Pitt to a shared national championship with Michigan — both teams played just five games.

So, what can be gleaned from this trip back in time?

A lot, and a little.

The county now has more than a dozen high schools all supporting multiple sports, many of them between 15-20 varsity teams. Hundreds of students play sports every year here, thousands in Pennsylvania. That leaves far more targets for the virus, even with the best mitigation tactics. It’s incomparable to 1918.

We also understand social distancing and disease far better than we did a century ago. Just look back at old ads from the time, hawking remedies that at best did nothing and at worst were potentially poisonous. Our collective medical understanding is infinitely better.

But did you notice the scheduling problems?

Some health experts fear a second wave of COVID-19 in the fall, especially with states lifting strict quarantine policies. The odds many teams will be postponing, canceling, rescheduling, adding and subtracting games throughout the year on the fly is greater than zero. It’s not an unfair prediction to say that might become common practice.

Schools could be forced to close state-wide or on a case-by-case basis again. If a team finds out a player (or multiple players) are COVID-19 positive, it’s tough to imagine their next opponent being willing to play them. Could we see football teams go weeks without games? Will a soccer team have to forego its entire season?

I’d bet on seeing situations like that crop up.

History is all the evidence we need.

Jake Adams is the sports editor at The Sentinel. He primarily covers high school sports in Cumberland County and writes a new column called Game Changers. Have a topic in mind? Email him at jadams@cumberlink.com or follow him on Twitter @jakeadams520

Cumberland Valley's Hunter Schryver is rehabbing from Tommy John. West Perry's Ben Dum is back home staying in shape. So is Camp Hill's Michael Hope. All three await word on the 2020 season

Gov. Tom Wolf: Guidelines for high school sports 'should be out tomorrow or Wednesday'

Will high school teams and athletic departments finally get the guidelines they've been asking for?

Gov. Tom Wolf released his return-to-play guidelines for high school, college, pro and recreational sports Wednesday, along with some general guidelines all sports should follow.

Adams: More questions remain, but enough have been answered right now for PIAA sports to begin their comeback

We have enough answers right now to crack open locker rooms and equipment sheds, to dust off the squat racks and line fields. That’ll have to do for now. That must do for now.

A Sentinel story Oct. 4, 1918 on the upcoming Carlisle football season.

A Sentinel story Oct. 8, 1918 on the latest updates of the pandemic in Carlisle.

A Sentinel story Oct. 14, 1918 on Dickinson football preparing for an abbreviated season due to the "flu."

A Sentinel story Nov. 1, 1918 reporting a college football game between Army and Susquehanna is cancelled.

A Sentinel story Nov. 4, 1918 on the latest number of reported influenza cases in Carlisle.

A Sentinel story Nov. 7, 1918 reporting Carlisle football has resumed practice after a month off due to the pandemic. 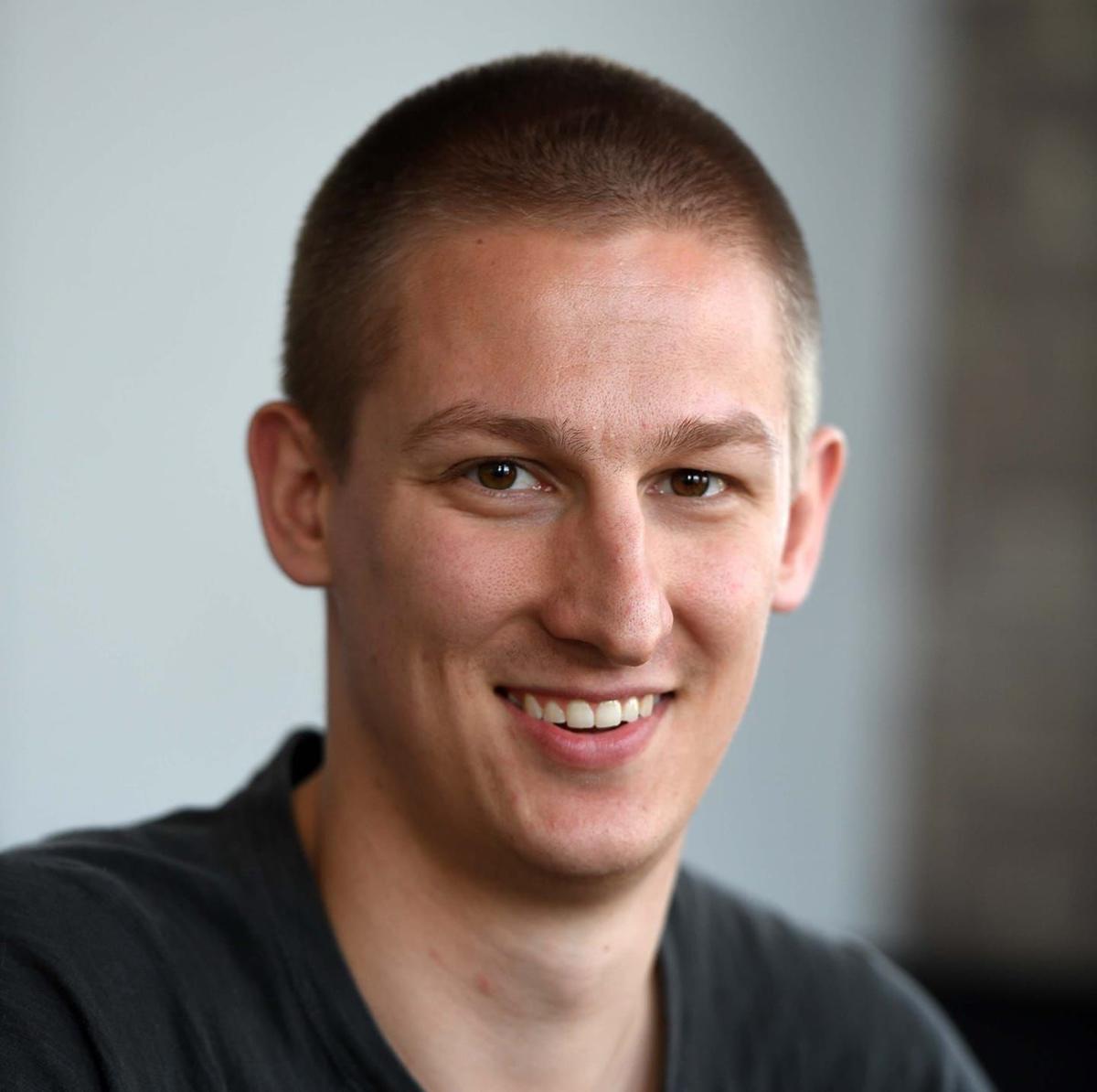