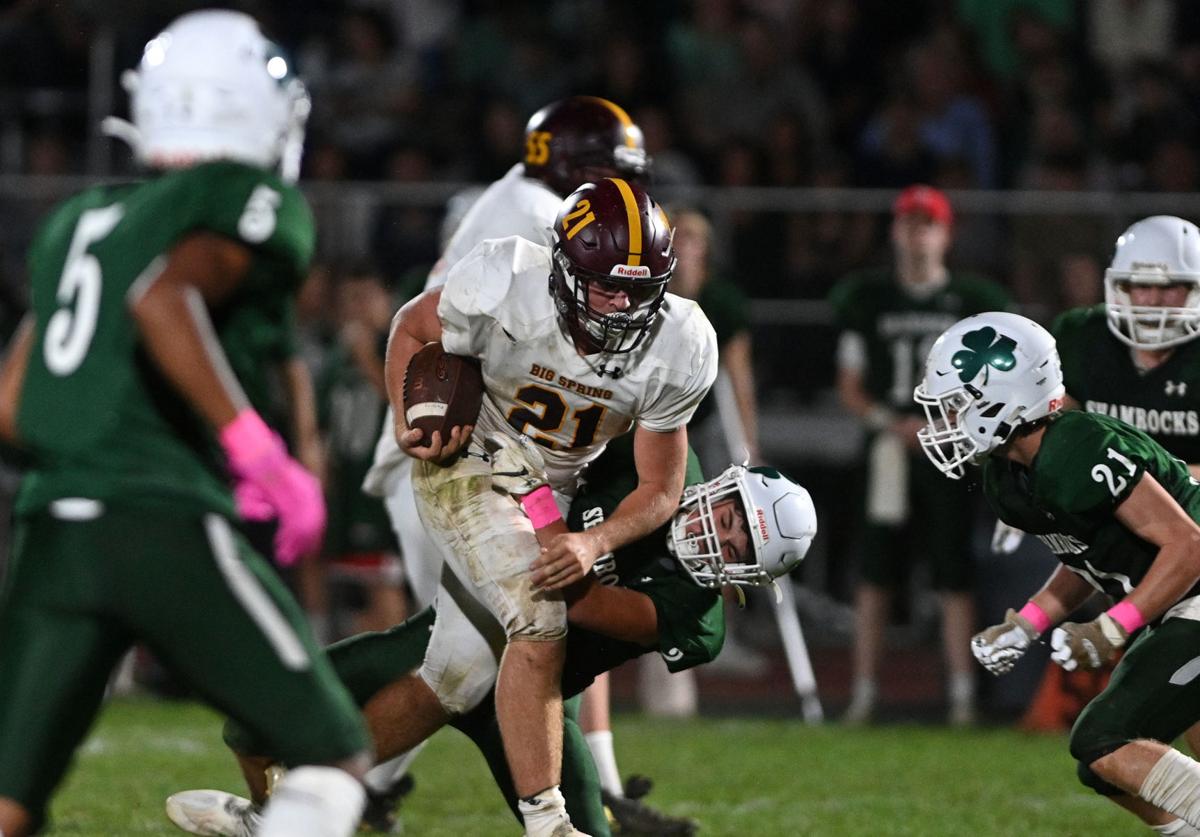 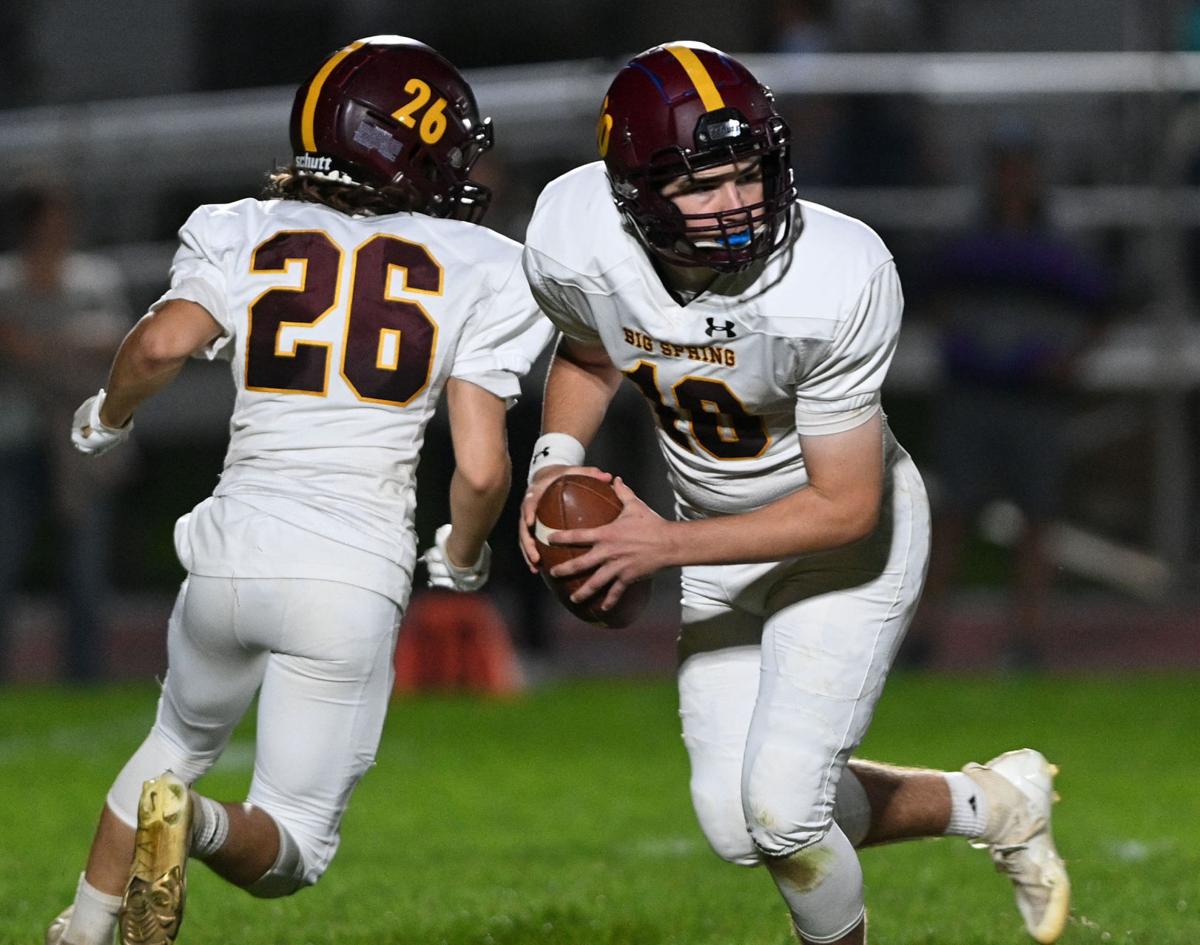 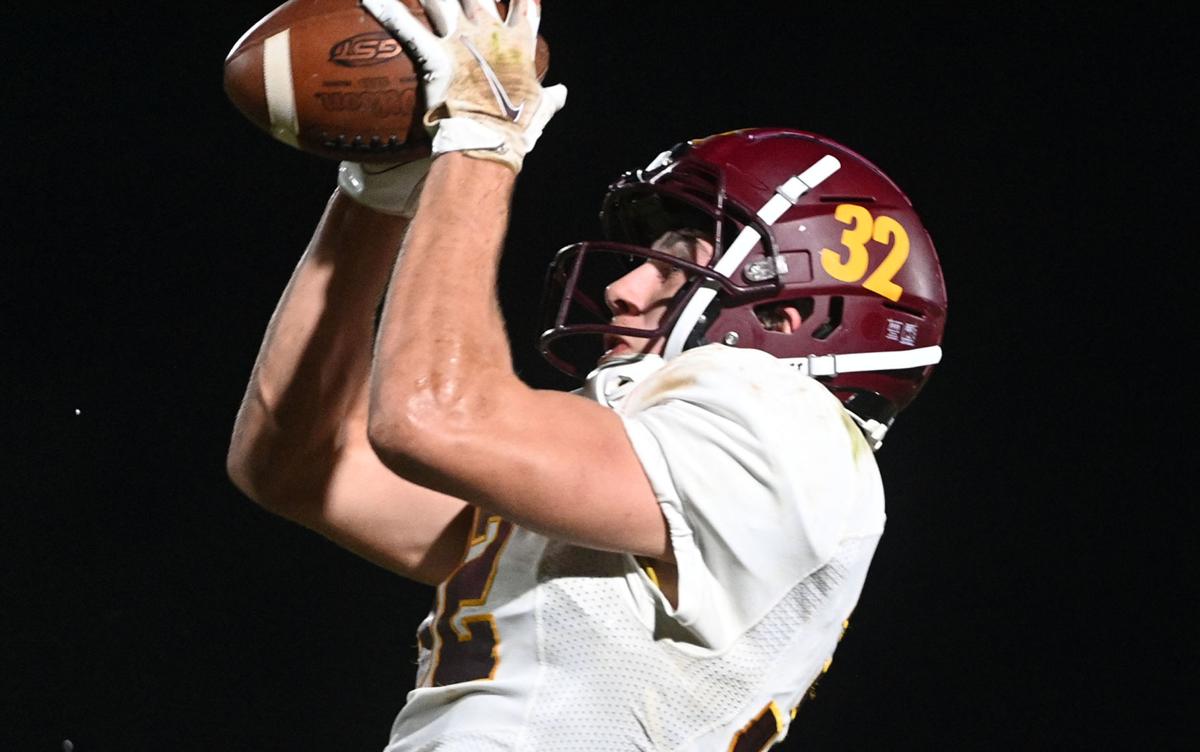 Big Spring's Connor Black pulls in a pass for a gain of yards during the second quarter in a Mid-Penn Capital Division game against Trinity at COBO Field Friday night. 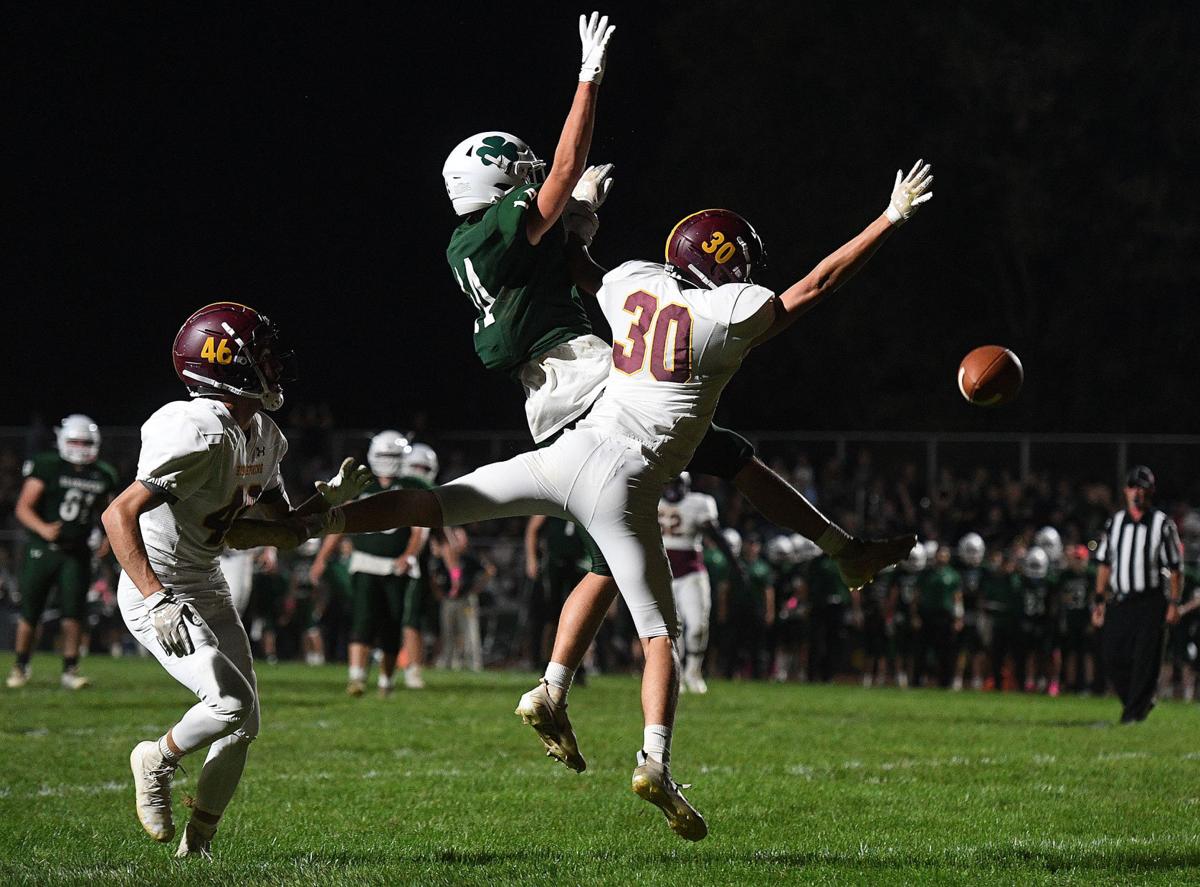 Dillon Wakefield’s legs are on an imaginary treadmill.

Once the Big Spring fullback starts running and finds his groove, there’s no telling how far he’s going to go and the amount of defenders he’s going to drag along with him. And when a defense can stop him, more times than not, it takes a host of tacklers to bring the Bulldogs’ workhorse down.

In Friday night’s Mid-Penn Capital Division tussle against Trinity at COBO Field, Wakefield’s white jersey turned a grassy green color, as he barreled his way to 264 yards on the ground and four touchdowns to push Big Spring past the Shamrocks, 42-33.

“Up front, they were just great,” Wakefield said, complementing his offensive linemen. “They were getting down the blocks and opening up lanes for me, and I just had to make one cut and get as far as I could, fight for the yards.”

Out of the gate, the momentum swung in Trinity’s favor. Shamrocks quarterback Caleb Wray connected with Trey Weiand for a 64-yard pass before Tyler Rossi capped the opening drive with a 4-yard scoring run. John Paukovits tacked on a 32-yard field goal after the defense intercepted Ethan Eiseneberg, bumping the lead to 10-0.

The Bulldogs (6-2, 2-1 Capital) responded on the ensuing possession with a Wakefield 7-yard rumble. Trinity’s Rossi ballooned the Shamrock advantage back to 10 with a 28-yard burst early in the second quarter.

Two drives later, with Wakefield leading the charge, the Bulldogs found the scoreboard again. The Big Spring senior popped for a pair of 20-yard runs, eventually striking pay dirt from 4 yards out. The Bulldogs garnered their first lead with 34 seconds left in the half as Eisenberg hit tight end Connor Black on an 12-yard post route to provide Big Spring a 21-17 edge.

“You know, having the game like we had last week (in a loss to Boiling Springs), the guys getting back up,” Big Spring head coach Joe Sinkovich said, “our guys did a good job to battle and battle every single play.”

Out of the break, Trinity (3-4, 0-3) posted another field goal to inch within one. But Big Spring’s Logan Schmidt had other ideas. On a screen pass, the Bulldog wide receiver danced through traffic and ran 80 yards to the house. Wakefield added his third score from 15 yards out, boosting the Bulldog cushion to 15.

Seeming to bounce back from every Bulldog punch, Rossi completed his touchdown trifecta, breaking down the right sideline for 27 yards to make it a one-score game, 35-27.

Wakefield silenced the Trinity faithful with a 58-yard burst down the seam with 9:56 left in the contest. Trinity mustered an additional score at the 3:47 mark when Wray hit Cole Cappawana with a 10-yard touchdown pass, rounding out the scoring.

“Dillon worked hard this offseason, and we told him, ‘We need you to be that running back at 213 pounds, that you’re running through guys and running tough,’” Sinkovich said. “And, you know, he’s a leader and he does a great job of stepping up and doing what we need him to do.”

In addition to Wakefield’s career night, Schmidt reeled in two receptions for 115 yards. He also rushed for 50 stripes.

Entering Friday night’s clash, Big Spring held the No. 8 seed in the District Class 4A power rankings. 10 4A teams earn a postseason berth. On the other hand, Trinity, slotted as the No. 4 seed in 2A, will likely fall outside the playoff window with 2A only sending four schools to the district playoffs.

“It's big,” Wakefield said of the win, “especially from last week, coming off a tough loss, so it's good to get our momentum back coming in with a big win. And hopefully, because we have a tough opponent next week in Steel-High, we're gonna need to carry this momentum into next week and really put it to them then.”

After his 264 yards and 25 touches, Wakefield is looking forward to resting his legs.

“I think going into next week, coming off a win, is good for morale and mentality for us,” Sinkovich said.

Glenn Robinson rushed for three touchdowns Friday night, accounting for all of Mechanicsburg’s scores in a 21-12 win over Susquehanna Township…

Concluding their 2021 regular season with a 7-3 record, Big Spring is District 3 postseason bound for just the second time in program history and have its sights set on its first district playoff win.

Big Spring's Connor Black pulls in a pass for a gain of yards during the second quarter in a Mid-Penn Capital Division game against Trinity at COBO Field Friday night.