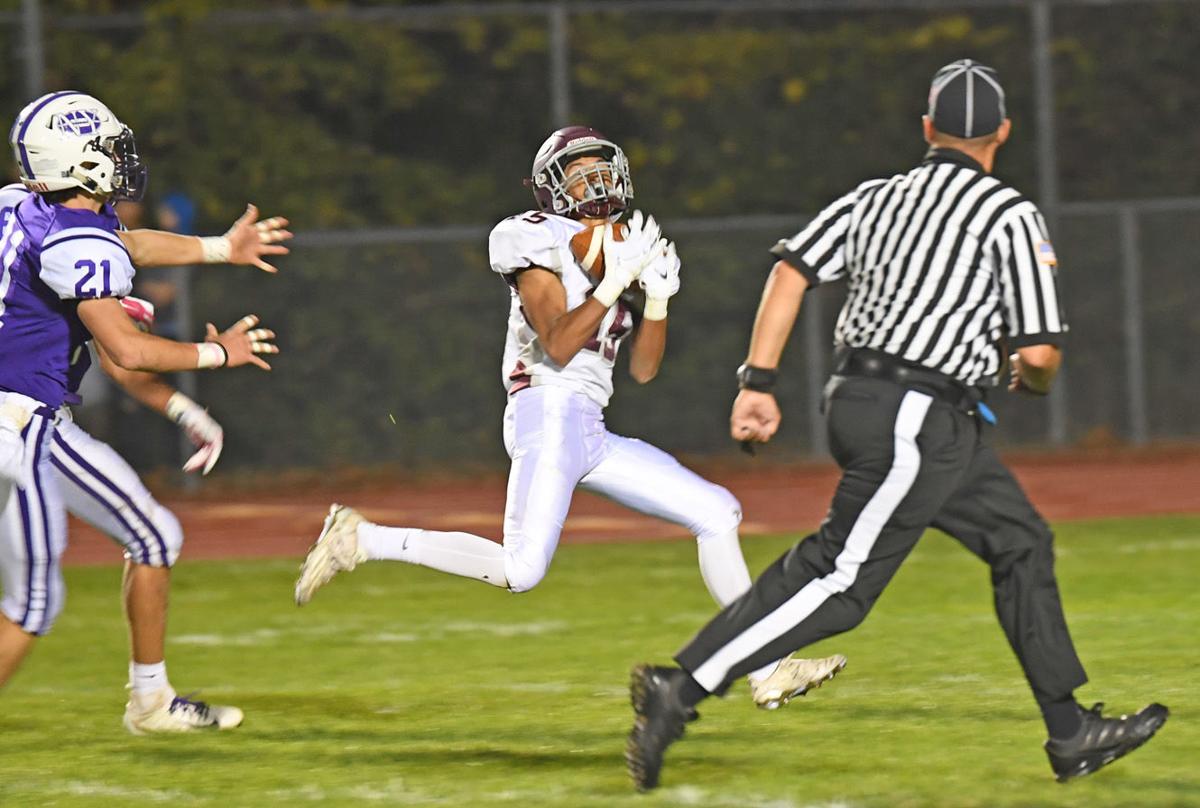 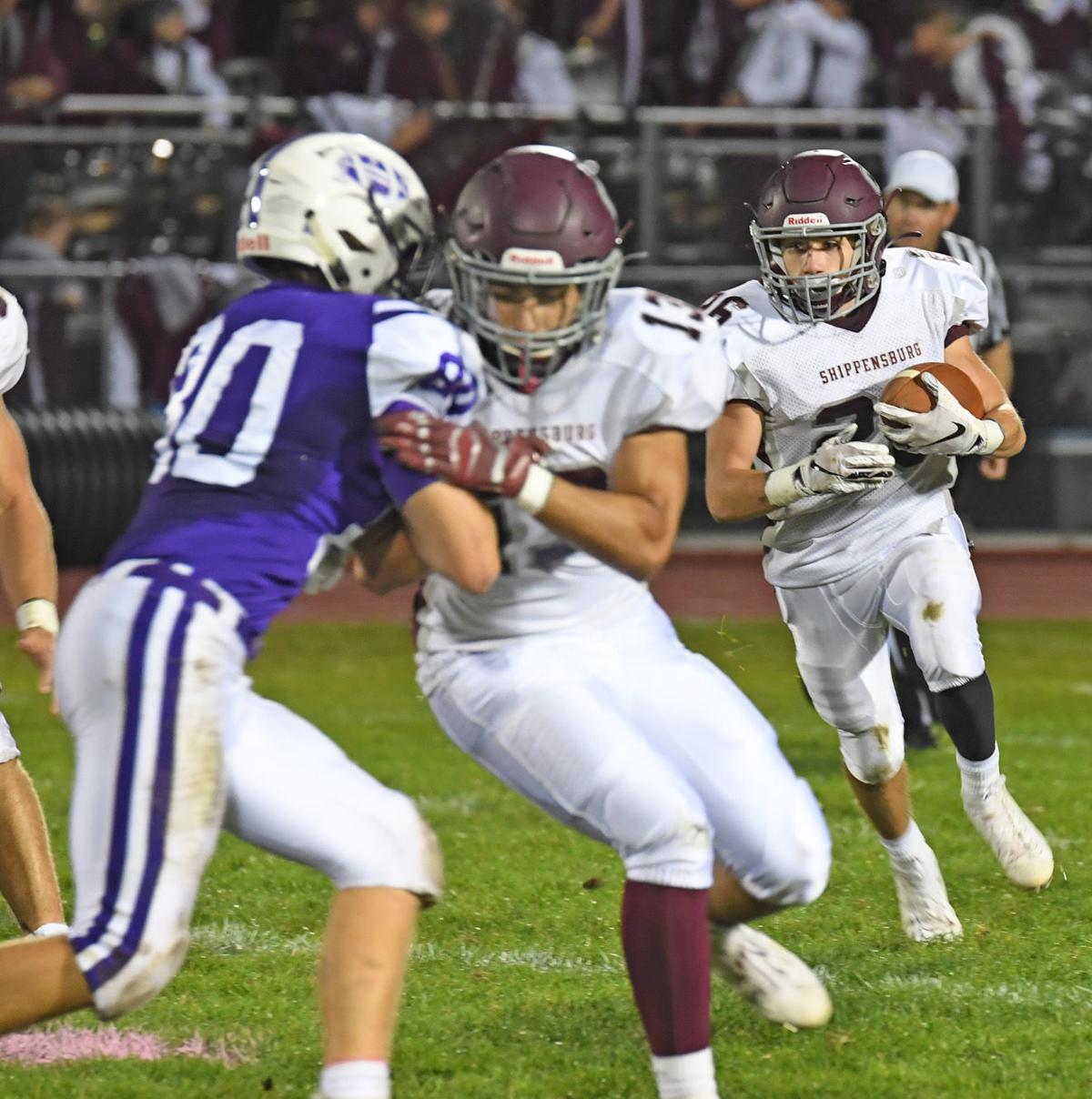 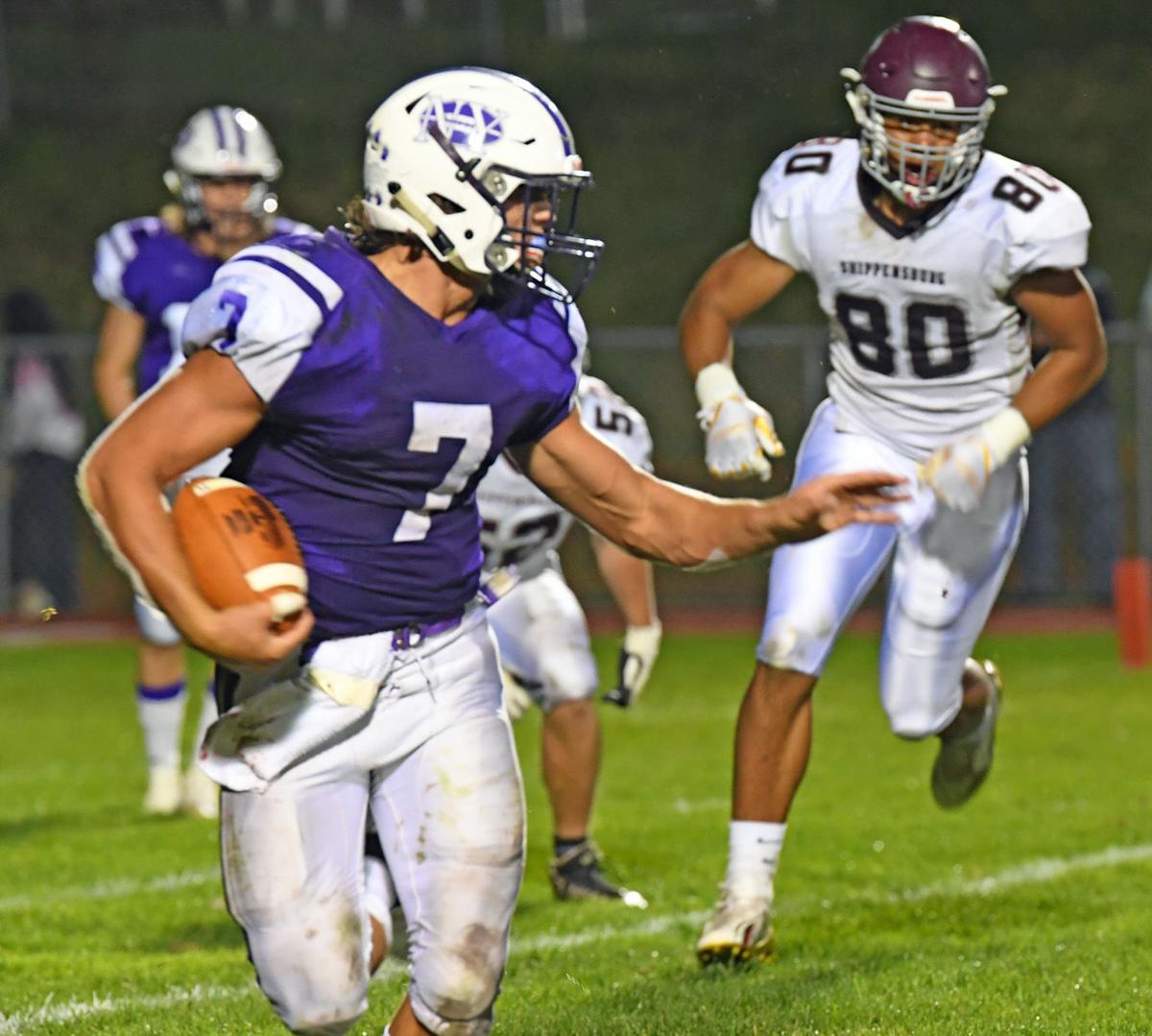 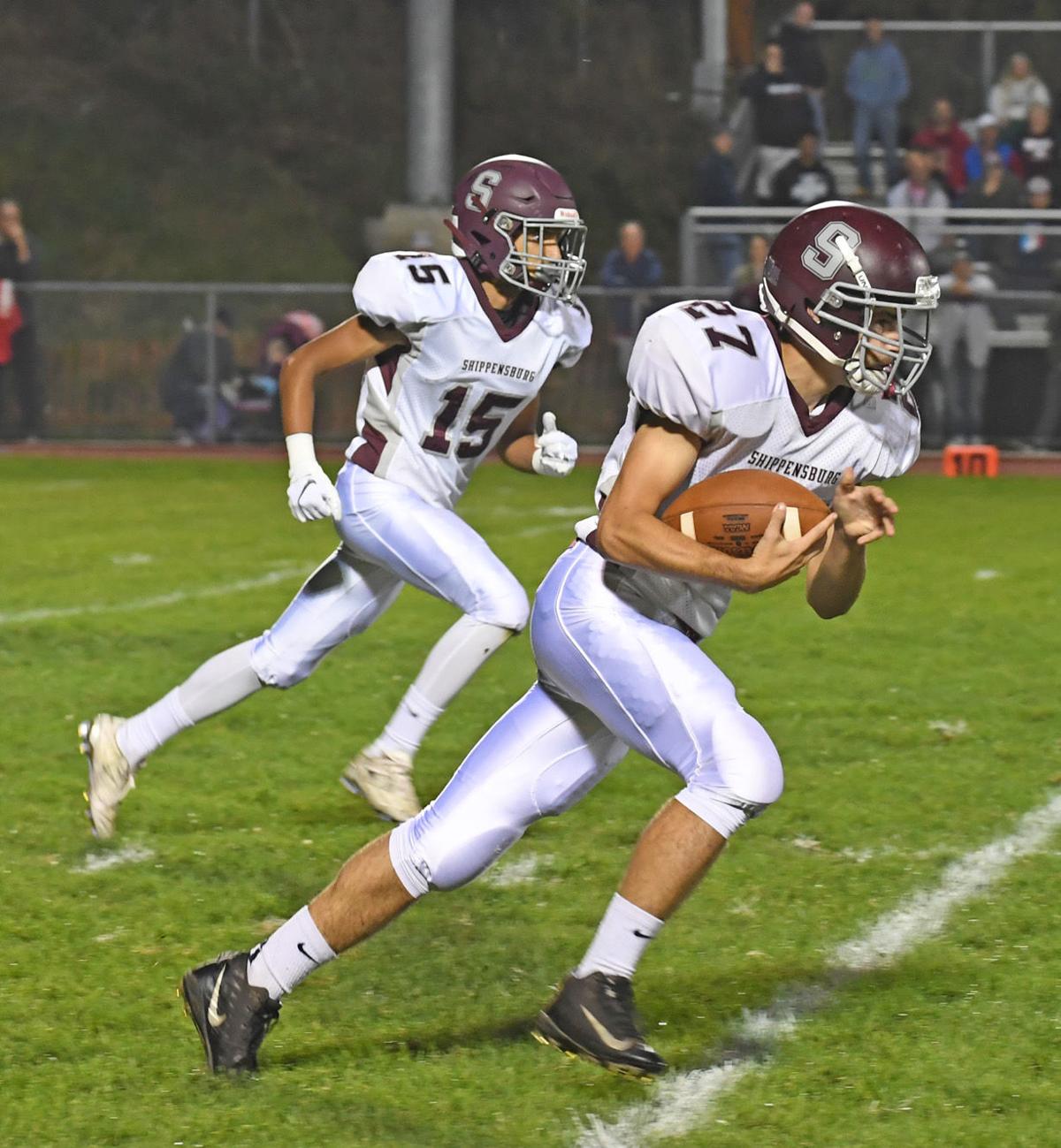 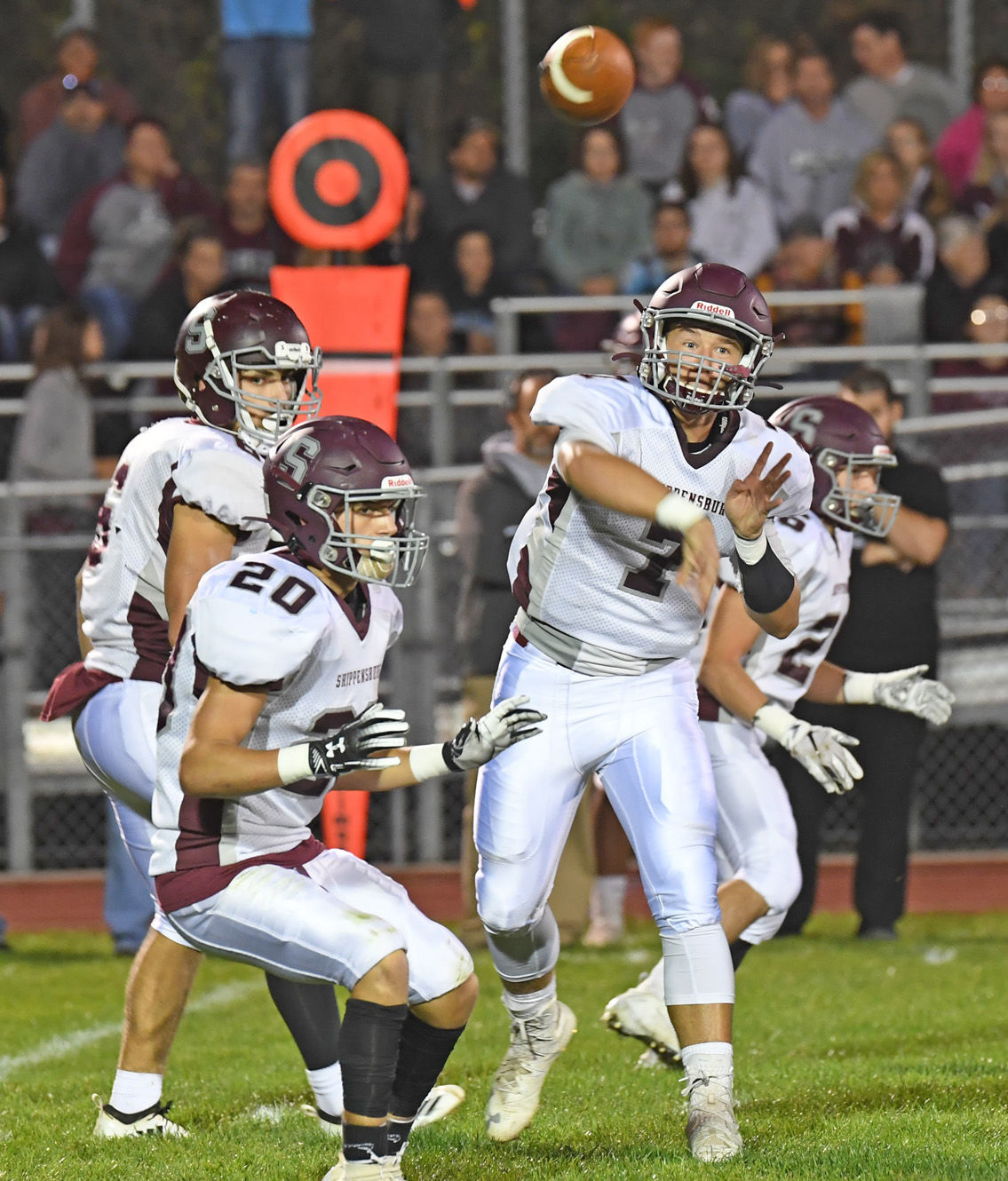 DILLSBURG — It lived up to the hype.

The much-anticipated clash between Northern and Shippensburg, the two Mid-Penn Colonial heavyweights the past few years, was everything it was built up to be since August.

A one-score game the entire night, back-and-forth, two bruising run games against two tough defenses, a critical goal-line stand at the end to decide it — this one had it all.

And two years after a gutting loss on Robert Bostic Field, Shippensburg returned and exacted its own emotional revenge with a 27-21 victory Friday night to effectively decide the division.

It was the first game all season Shippensburg (8-0, 5-0 Colonial) was seriously challenged. After seven weeks of blowout victories, the Greyhounds encountered a Polar Bears (5-3, 3-1) side with perhaps the Mid-Penn’s best running back in Kyle Swartz and an itch to knock off an unbeaten team. 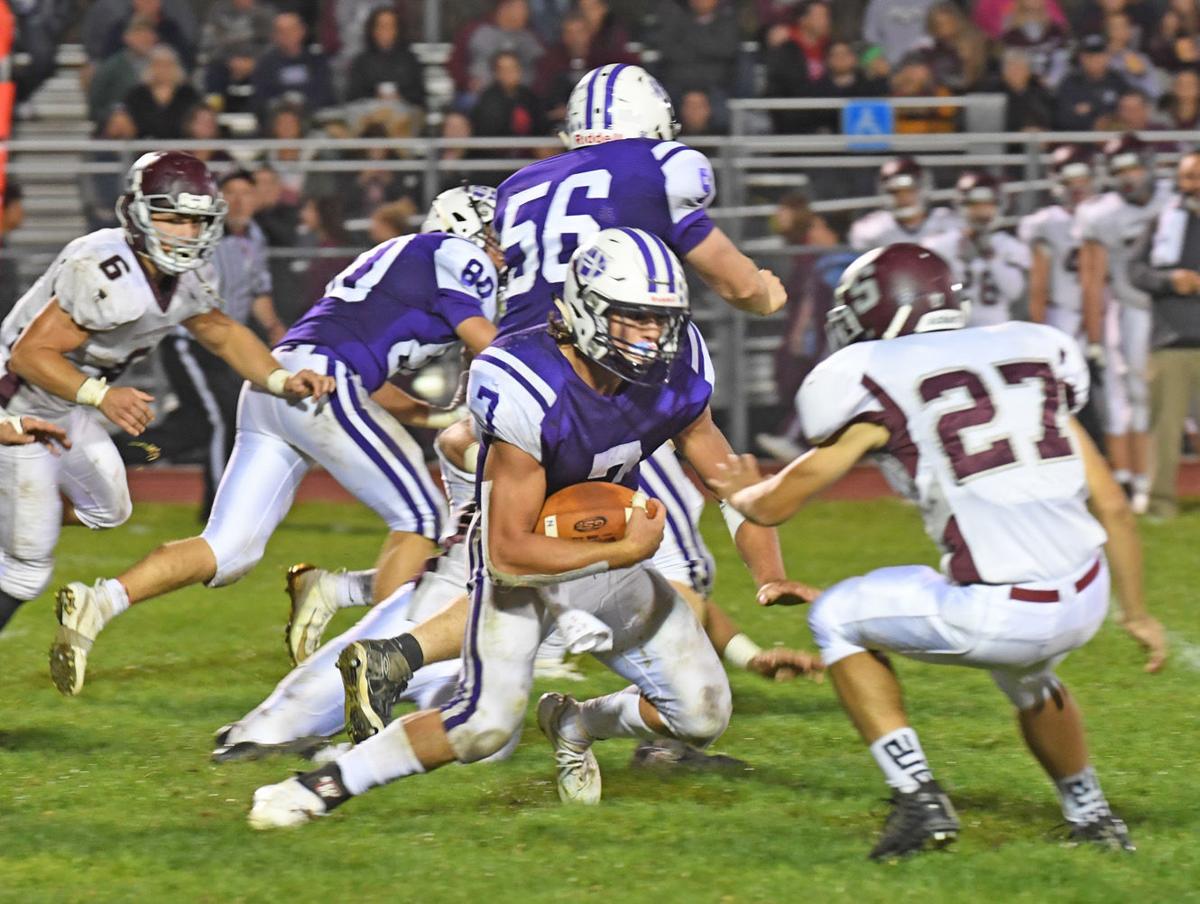 Northern's Kyle Swartz is tackled by Shippensburg's Delonte Wilson while he picks up a first down in a Mid Penn Colonial game Friday night at Northern High School. 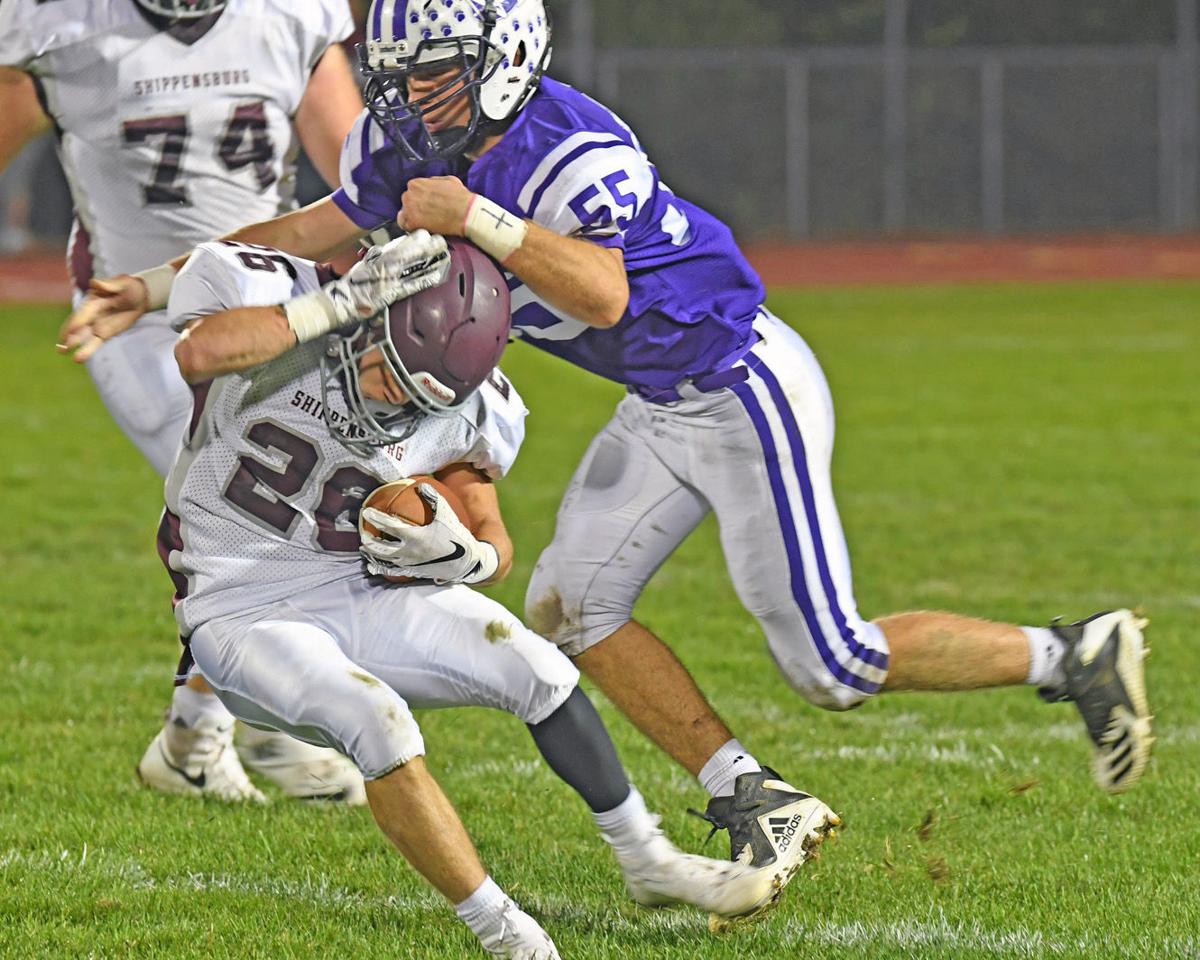 Shippensburg's Alex Sharrow appears to pick up a first down, but Northern's Bailey Blaschak is called for face mask in second quarter action in a Mid Penn Colonial game Friday night at Northern High School. 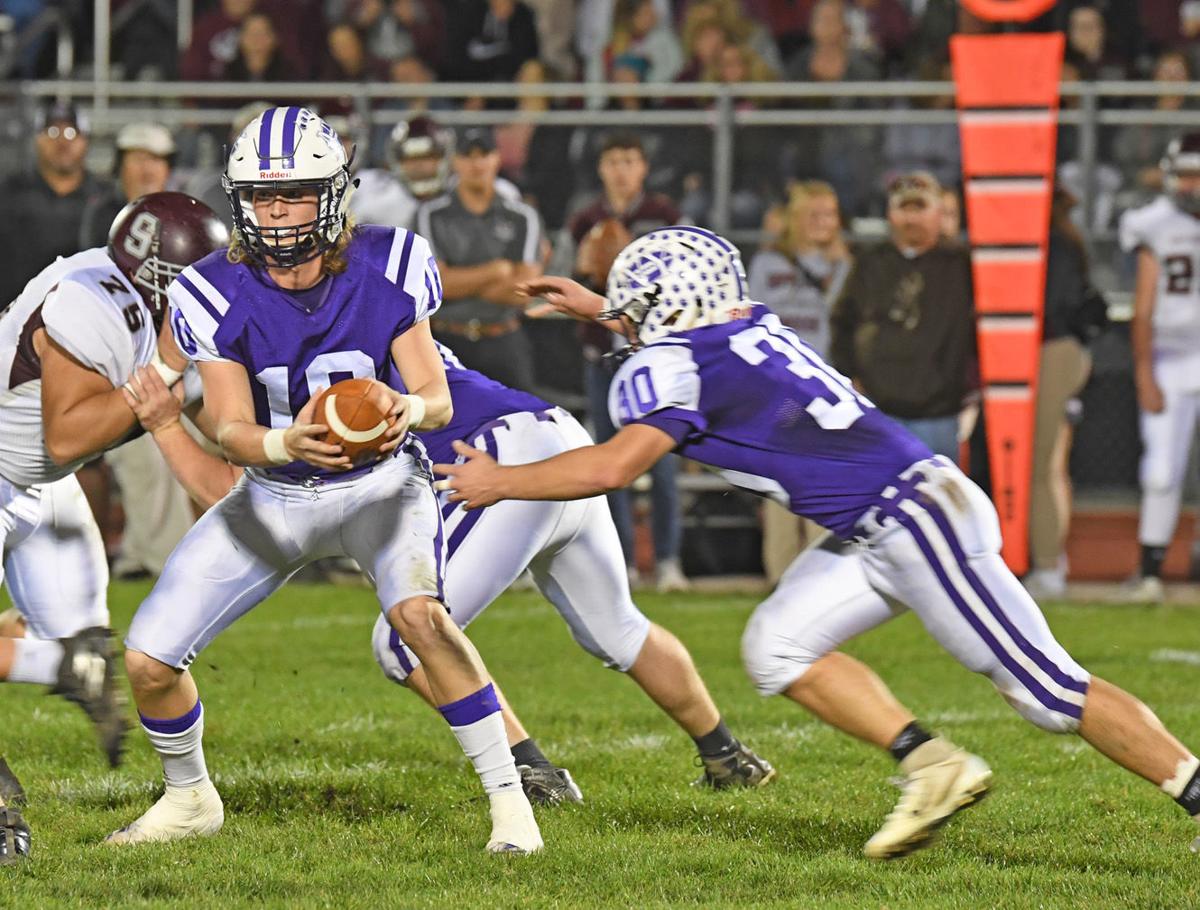 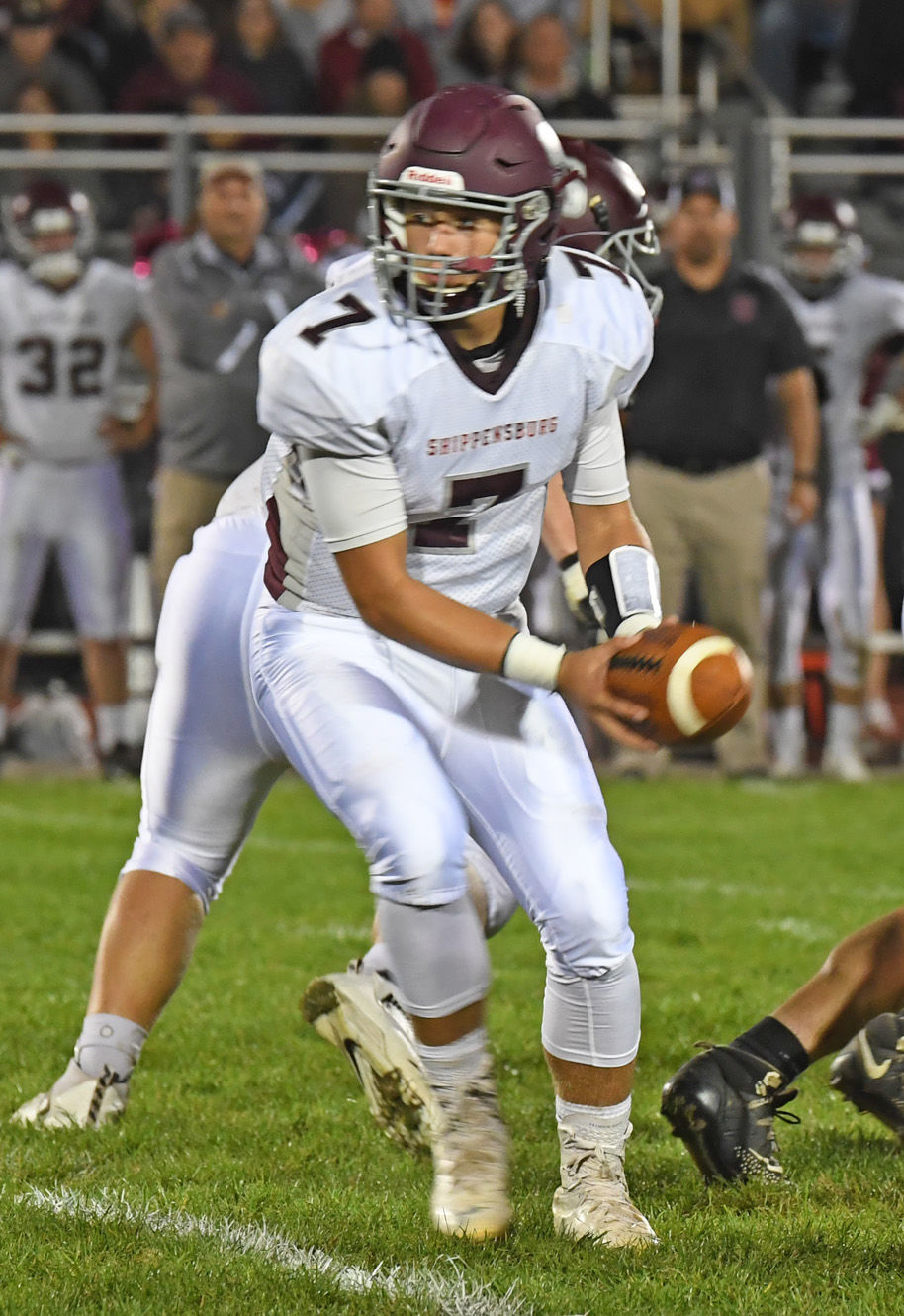 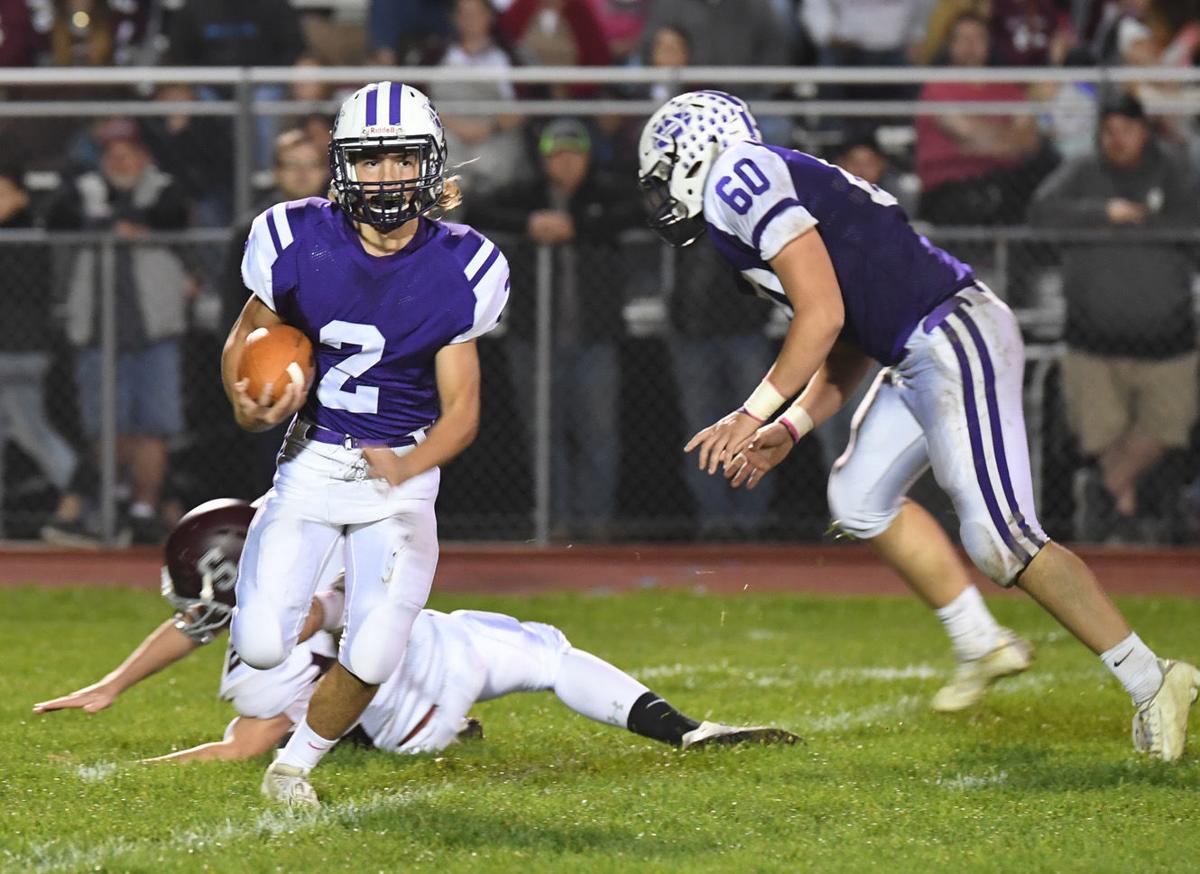 “Heck no, that wasn’t fun,” Shippensburg head coach Eric Foust said in a moment of exhausting levity. “No, I wanna win every game by 28. That wasn’t fun at all. … Shoot, my heart can only do this so many more times. I don’t eat well, I don’t sleep well.”

The P-Bears could have won it. But questionable play-calling, too many penalties and an inability to get Ship off the field during the eventual game-winning drive doomed the home team.

The final nails in the proverbial coffin came on the last two drives.

Down 27-21 following Delonte Wilson’s go-ahead 10-yard run, Northern embarked on a drive with 5:31 left from its own 36. Swartz (33 carries, 191 yards) kickstarted a promising drive, but it ended inside the 10 on three plays that gained negative-5 yards (with a Ship penalty evening out the yardage). Swartz was stuffed on the final play for a 2-yard loss.

.@NorthernFootbll Swartz is stuffed, and both teams called for offsetting penalties. @Ship_Football takes over and should be able to ice this up 27-21. pic.twitter.com/7fXWFDpIHN

“I second guess myself on that,” said Northern head coach Bill Miller, who repeatedly blamed himself after the loss. “And I told the boys after the game, ‘I blew it.’ And I blew it in that red-zone series.”

“We just did the same thing we did before,” said Shippensburg’s Colton Musser, who had a sack and a few critical tackles late. “We knew what we were gonna do, we knew how we were gonna stop him.”

Northern was gifted one last-ditch chance after Jacob Loy fumbled on what looked like the final drive. The P-Bears got the ball back 33 yards from tying the game, but Jordan Heisey lofted a jump ball to the 5-yard line that Ship’s Isaiah Houser picked off to finally ice the game.

Foust said it was a fitting end for Houser, who’s older brother Adam muffed a punt late in the 14-7 loss at Northern in 2017. Isaiah finished with five catches for 76 yards.

“We talked about that this week, we didn’t wanna be the team that blinked,” Foust said. “And we believe we weren’t, we believe they blinked. And that’s the difference in the game.”

District 3 Class 5A-leading Ship scored on a pair of big plays in the first quarter. Alex Sharrow took an end-around 61 yards for the first score, and Houser caught a beautifully placed ball from Zack Manning on a skinny post for a 41-yard TD.

Sandwiched by those scores was Northern’s answer, a 9-yard score by Jordan Heisey. Swartz slammed in from 11 and 2 yards out to tie the game at 14-14 and 21-21, respectively.

Northern’s opening drive after halftime stalled following a penalty, bobbled snap and sack after gaining 40-plus yards. It was a critical missed opportunity.

Loy fumbled twice but finished with 21 carries for 58 yards and a score. And Sharrow added 13 carries for 126 stripes. Swartz gained 191 yards, but the rest of the offense managed just 79. Ship hadn’t allowed more than 175 rushing yards in a game this season, and came in allowing just 3.4 yards a carry.

For more photos from the Shippensburg-Northern game, go to cumberlink.com/sports. You can also find video highlights from that game plus complete box scores from the Week 8 games on our website.