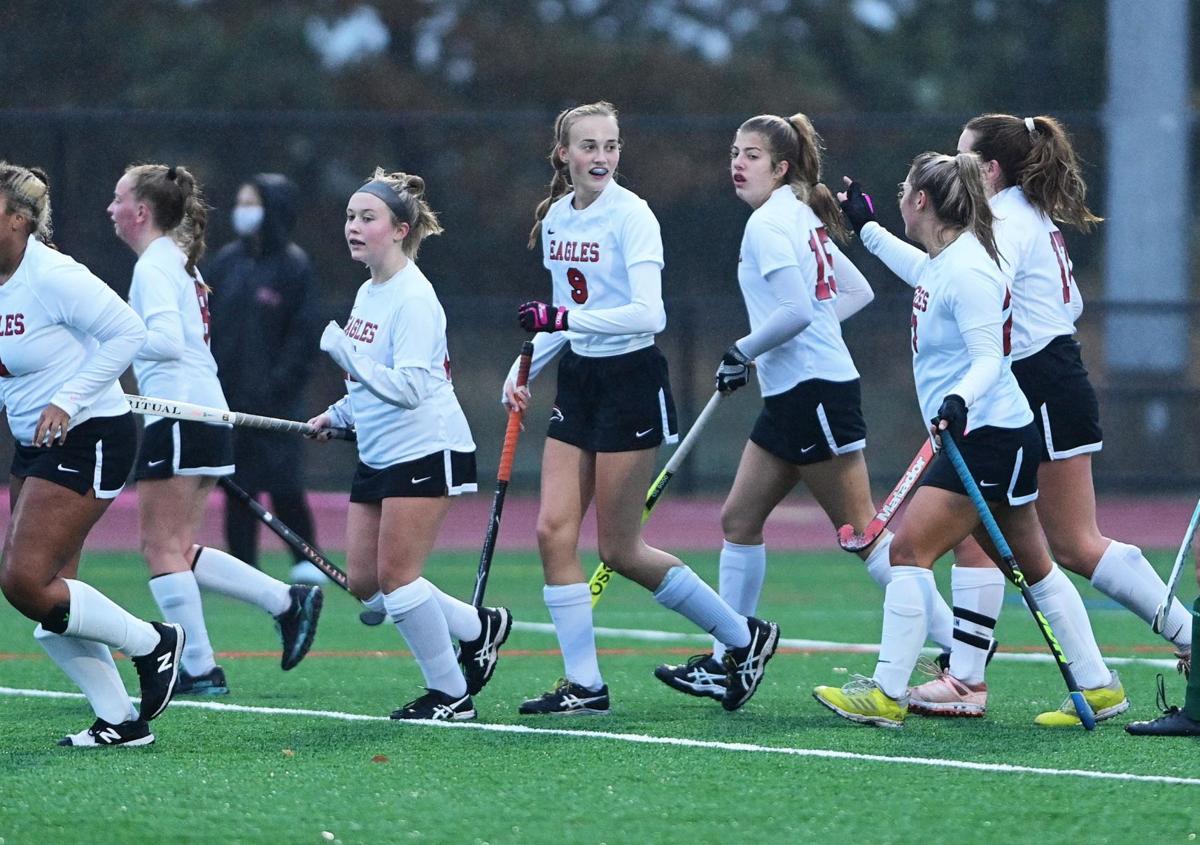 Cumberland Valley celebrates after scoring a goal in the first quarter in a Mid-Penn Commonwealth game against Carlisle Monday at Mountain View Middle School. 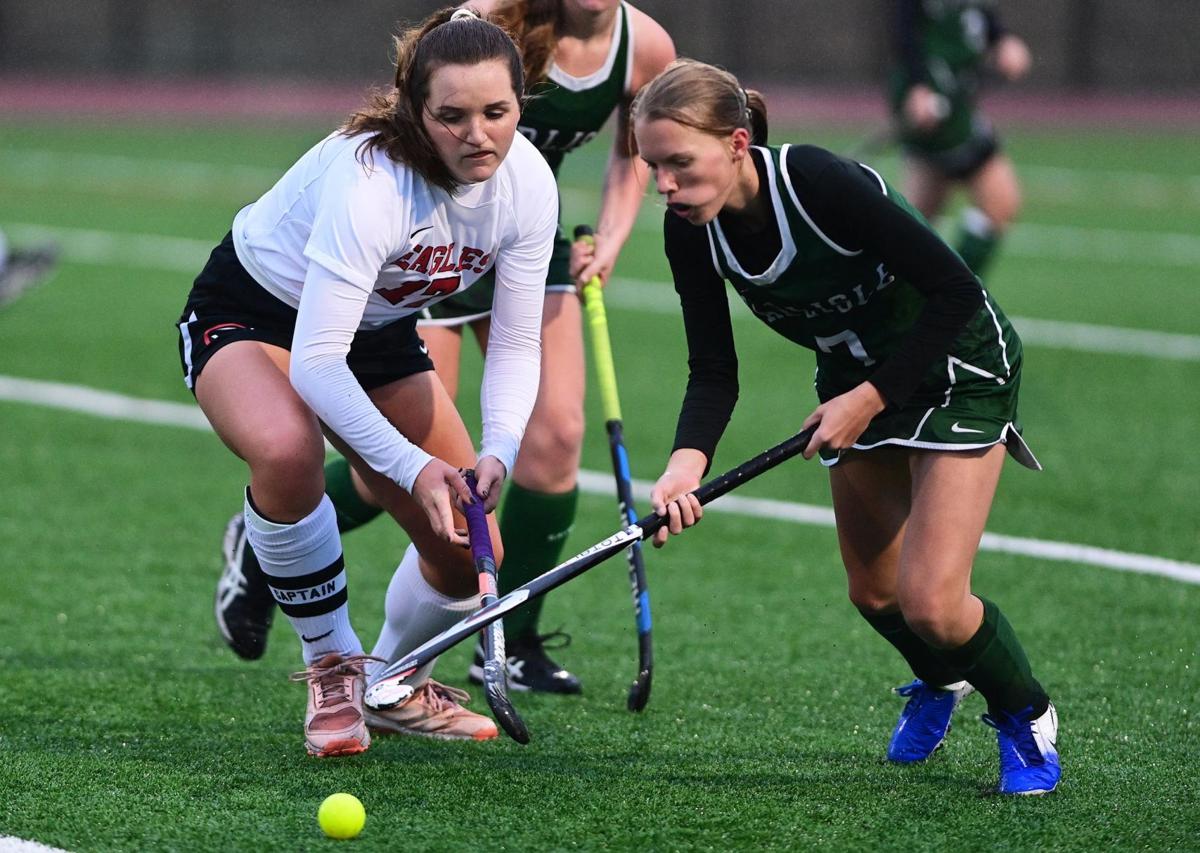 Carlisle’s Mollie Best, right, and Cumberland Valley’s Ami Mattingly battle for control of the ball in the first quarter in a Mid-Penn Commonwealth game Monday at Mountain View Middle School. 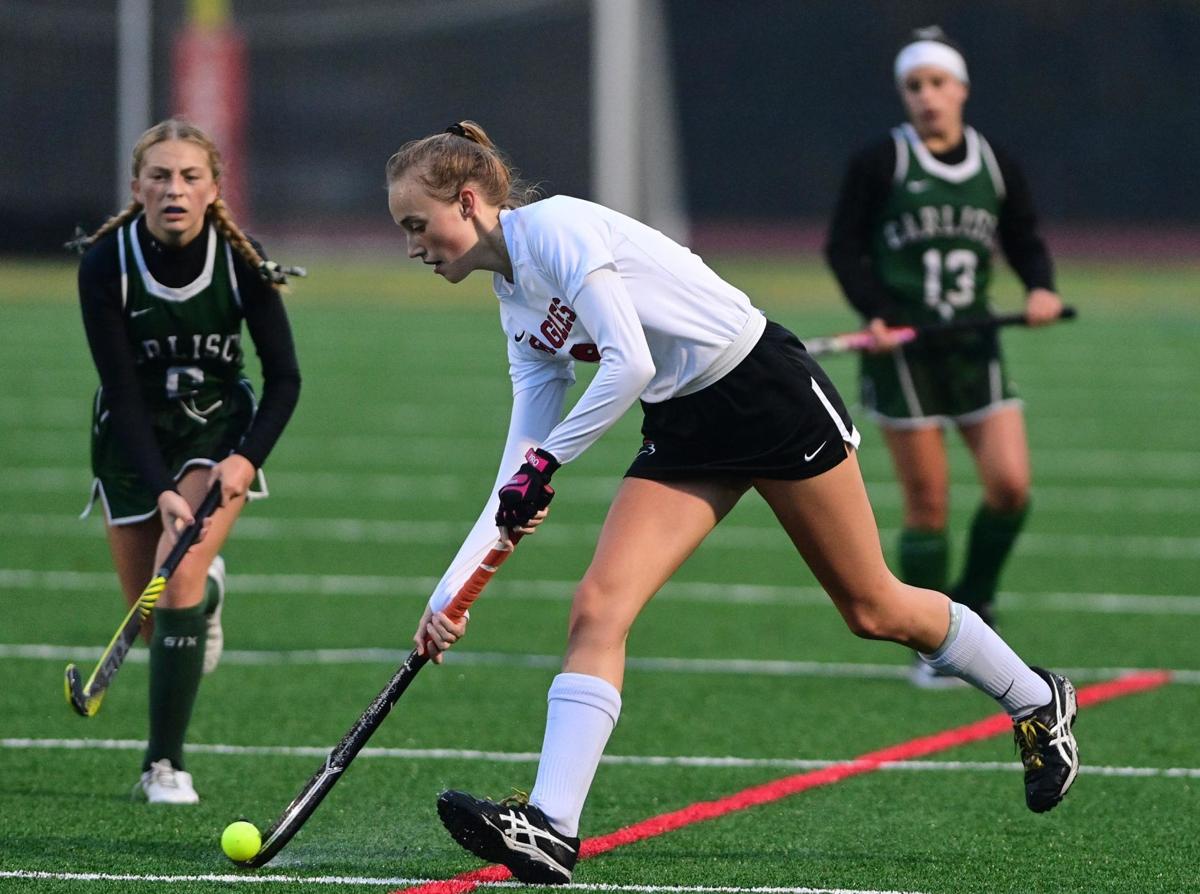 Cumberland Valley’s KK Sauve, front, drives the ball down the field in the second quarter in a Mid-Penn Commonwealth game against Carlisle Monday at Mountain View Middle School. 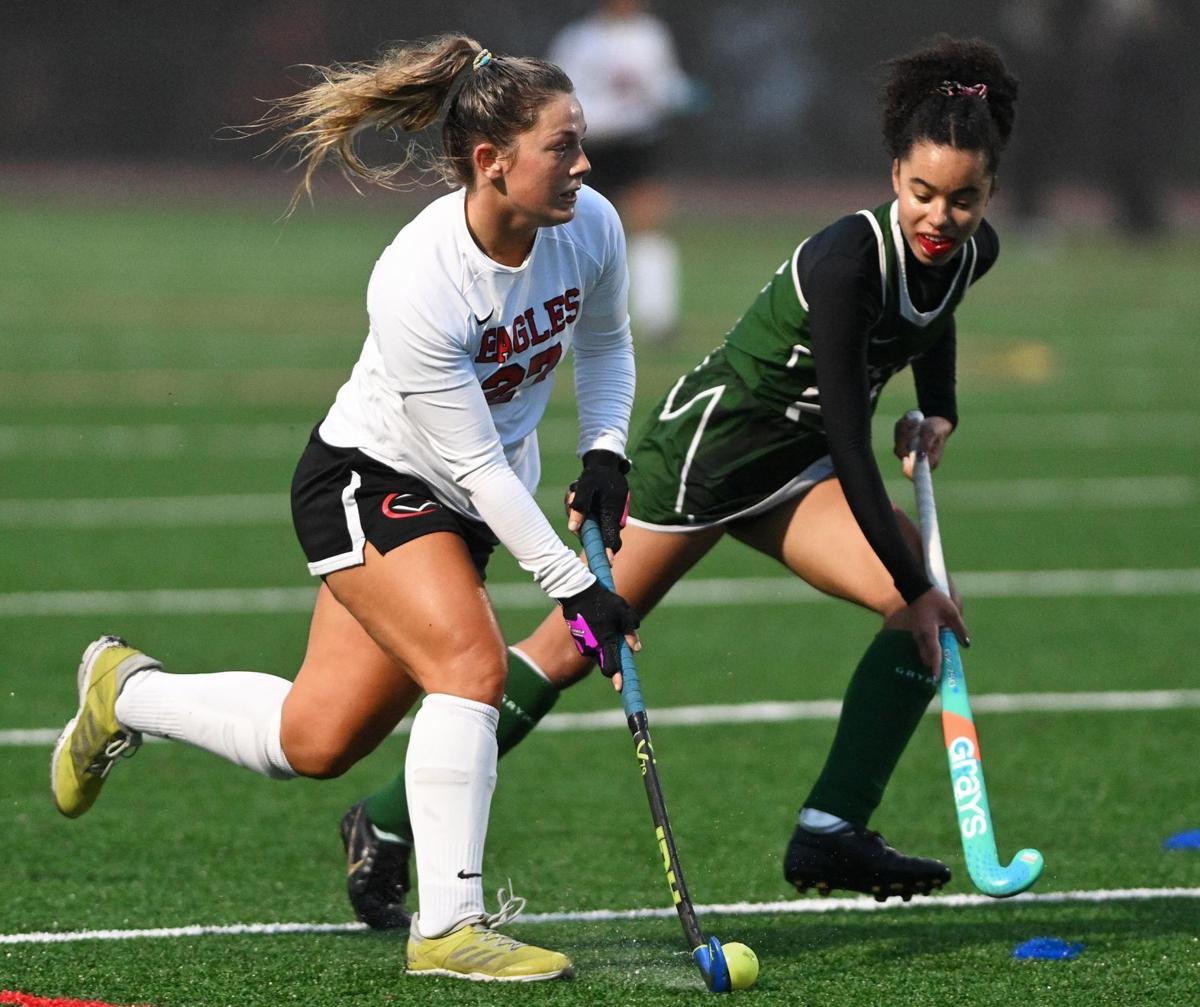 Mick Reinhard For The Sentinel

Creedence Clearwater Revival’s “Who’ll Stop the Rain” segued into Karen Carpenter belting out the chorus “Rainy days and Mondays always get me down” over the loudspeakers.

It’s a sentiment Cumberland Valley head coach Ashley Taylor may not necessarily agrees with as she watched her Eagles’ squad take it to Mid-Penn Commonwealth rival Carlisle, winning 5-0 in dominating fashion.

The Thundering Herd garnered the first corner of the game moments in, but that was the last legitimate scoring chance they would muster over the full 60 minutes. Cumberland Valley (4-2, 4-1 Commonwealth) controlled play and were relentless with the offensive pressure in securing the shutout victory.

“When we passed the ball and possessed, it looked great,” Taylor said. “When we started to just dribble against them, it broke down a little bit. But as long as they were passing, they played well. Carlisle’s defense and goalie did a solid job.”

The Eagles broke through in the 11th minute as Caroline Prokop redirected a KK Sauvé shot into the far corner. Three minutes later, Prokop pocketed her second goal, this time off an assist from Cassie McKenzie, to double the Cumberland Valley advantage.

In the second quarter, Ami Mattingly broke free from Carlisle’s double-teams and constant shadow to find the back of the cage off a feed from Bree Shively. Five minutes later, Mattingly matched Prokop with her second tally of the night as Herd goalkeeper Mackenzie Mullholland got a stick on the shot, but the ball trickled in for the 4-0 halftime lead.

Rounding out the scoring, Jenna Herbster pushed one past Mullholland off another Suavé assist in the final period.

The Eagles exhibited a balanced attack highlighting exceptional patience in making the extra pass, leading to multiple scoring opportunities in the circle.

“Our goal as a team is to pass, so everyone gets involved,” Taylor said. “If you play possession and the other team doesn’t touch the ball, they can’t score.”

Mulholland led Carlisle (2-3, 1-3 Commonwealth) as the sophomore netminder turned away 10 shots and proved active in goal for the Herd.

Cumberland Valley amassed 13 penalty corners but struck pay dirt on only one sequence, Mattingly’s first goal. For all the things the Eagles did right on Monday, it was a small point of concern headed into a formidable gauntlet of games on their schedule.

“I’m hoping it was the weather,” Taylor said. “We weren’t executing our hits, and we had sticks slipping out of each other’s hands. Their goalie came out a little bit further than we’re used to, so that really threw us off.”

Both squads have loaded weeks as Carlisle travels to Cedar Cliff on Wednesday before hosting CD East and State College. Cumberland Valley returns to action Friday against Mifflin County and Saturday against Cedar Cliff.

For more photos from the Carlisle at Cumberland Valley game, go to cumberlink.com/sports

Behind its defense and trio of goals on corners, Northern blanked host Boiling Springs Saturday 3-0 at Ecker Field.

Notes from Cumberland County field hockey through the first full week of the regular season.

A quick look at some of the standout local field hockey performances from the weekend.

Here are the 2021 field hockey preview capsules in The Sentinel coverage area based on information provided by area coaches.

As the start to high school field hockey approaches, here are five notes to keep in mind for the 2021 season.

Cumberland Valley celebrates after scoring a goal in the first quarter in a Mid-Penn Commonwealth game against Carlisle Monday at Mountain View Middle School.

Carlisle’s Mollie Best, right, and Cumberland Valley’s Ami Mattingly battle for control of the ball in the first quarter in a Mid-Penn Commonwealth game Monday at Mountain View Middle School.

Cumberland Valley’s KK Sauve, front, drives the ball down the field in the second quarter in a Mid-Penn Commonwealth game against Carlisle Monday at Mountain View Middle School.