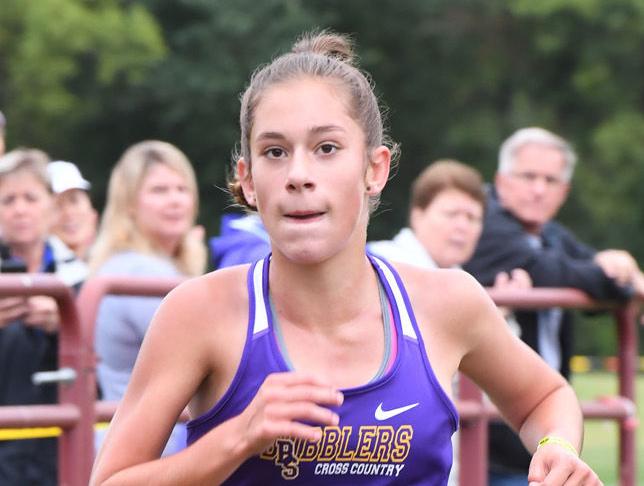 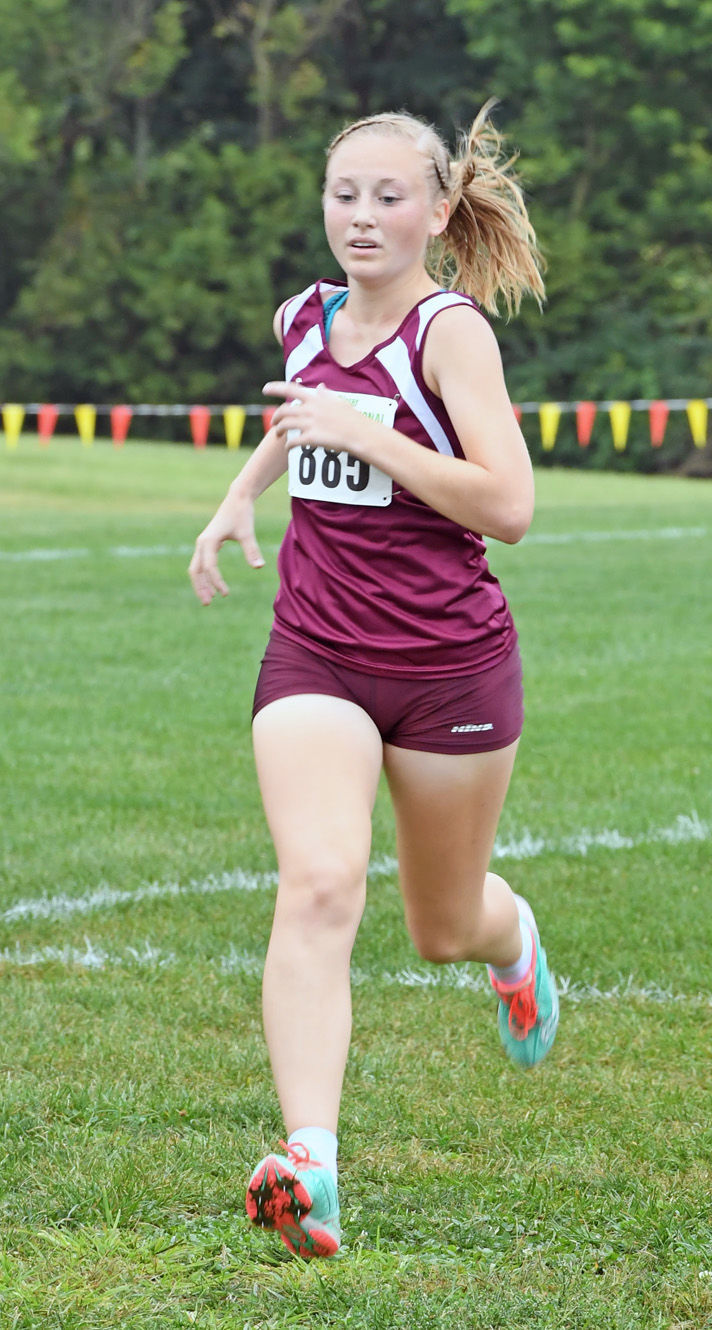 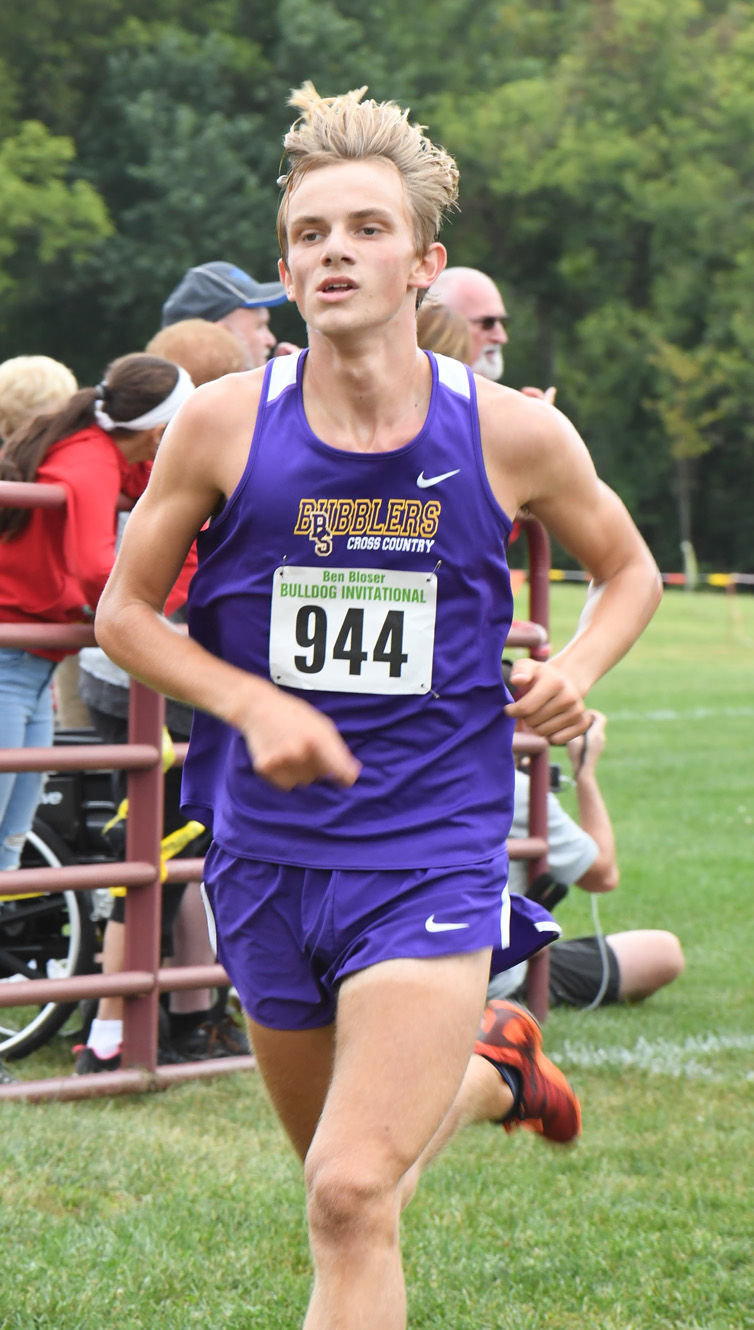 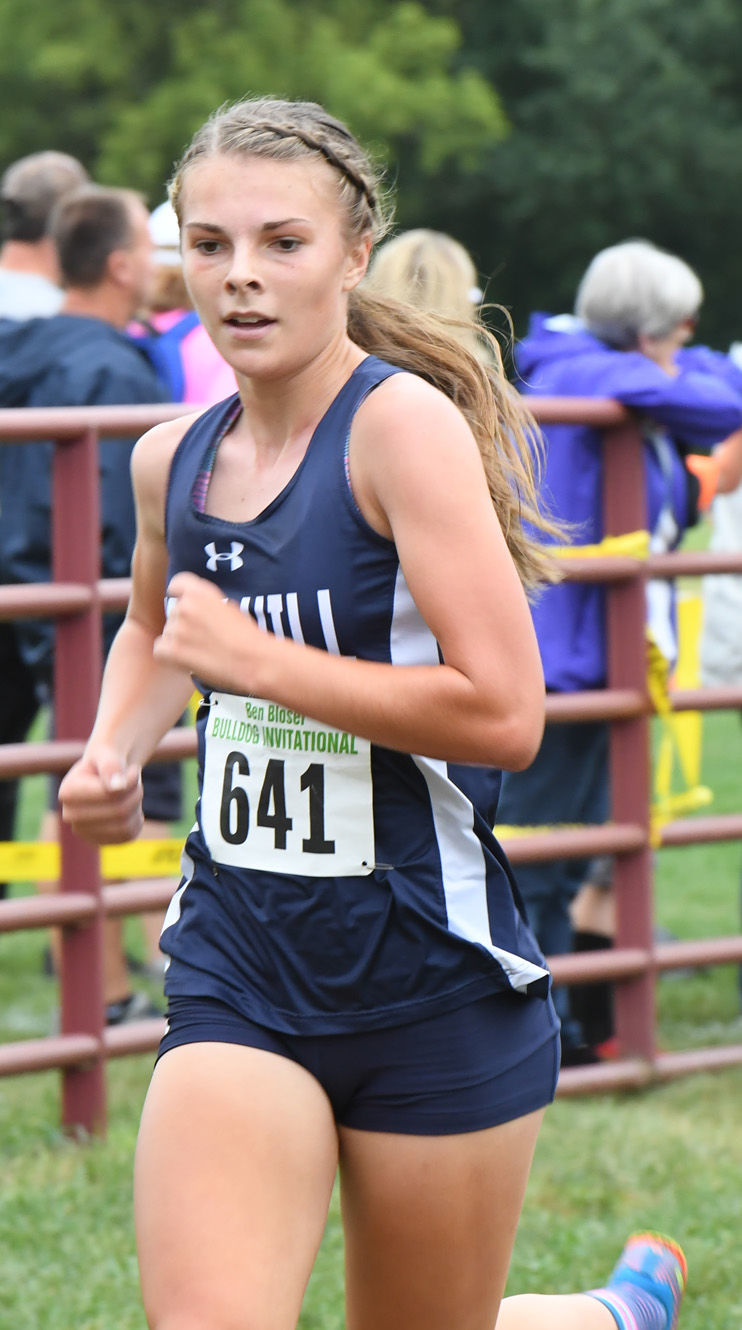 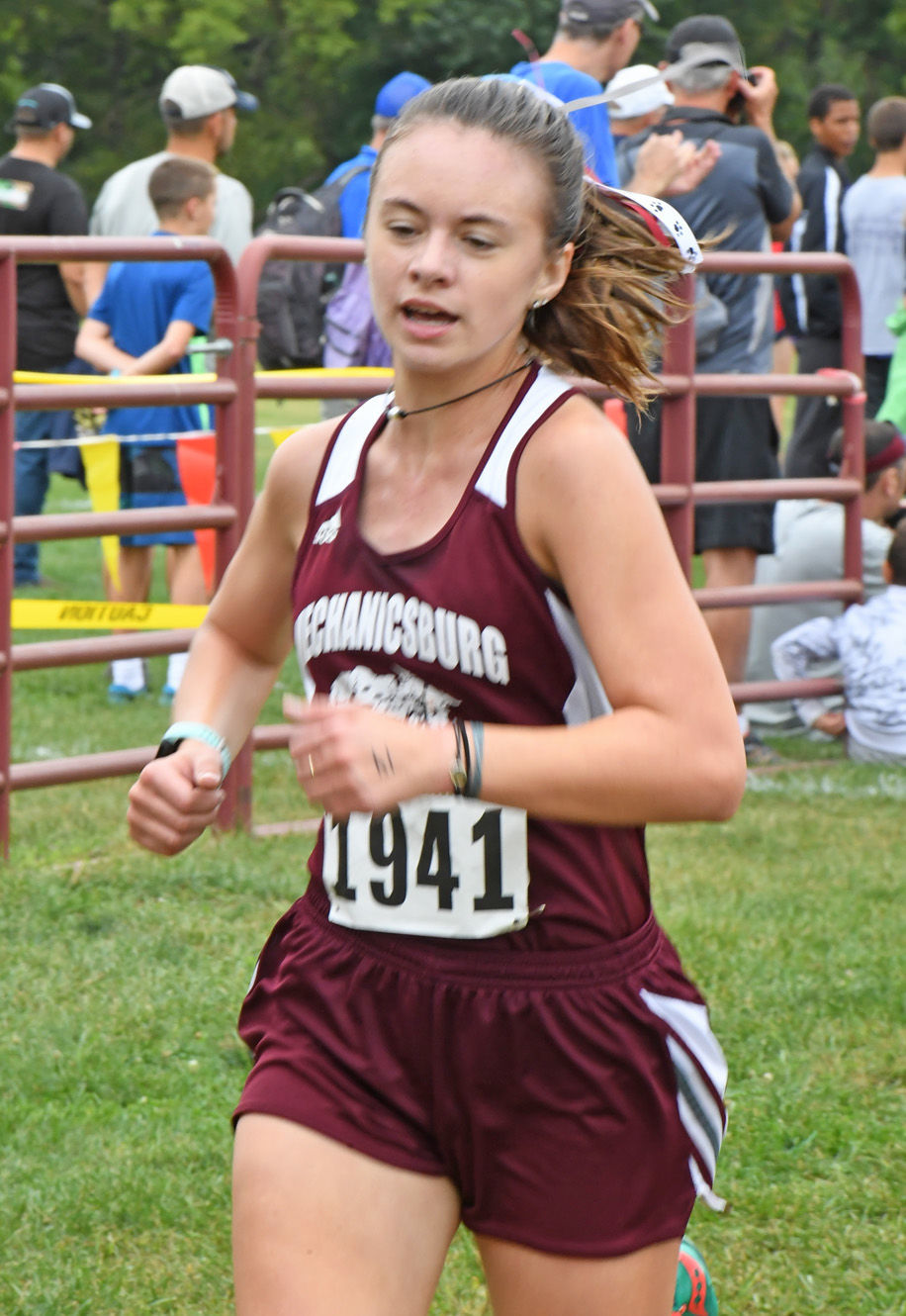 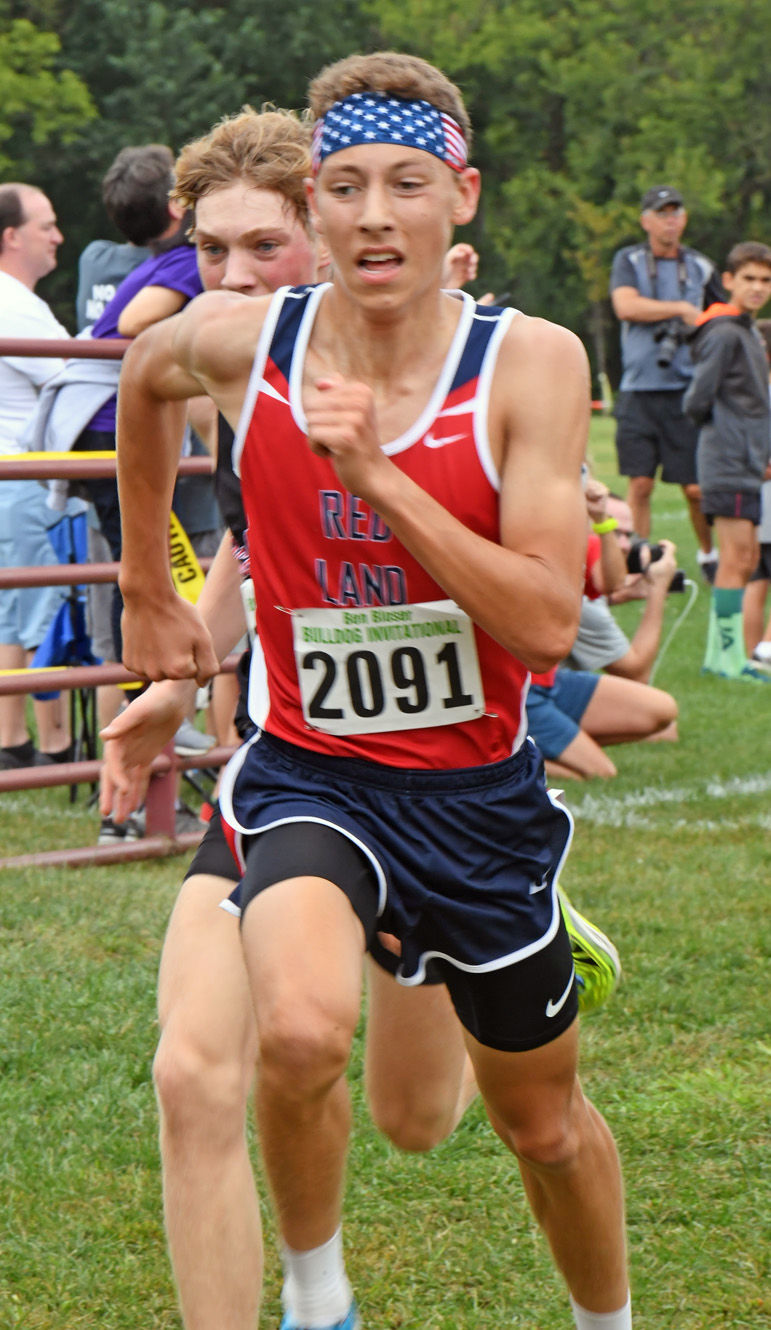 NEWVILLE — Many of the area’s biggest names were not in attendance — Carlisle ran the Spiked Shoe Invitational on Friday, and Marlee Starliper and Northern had the weekend off — but Saturday’s first big local Saturday invitational of the cross country season provided a chance for other runners to step up.

Plenty did, including a few local surprises at the Big Spring Ben Bloser Invitational.

Here are five things — like the five kilometers of a high school race — that stood out at the Bulldogs’ annual home invite: 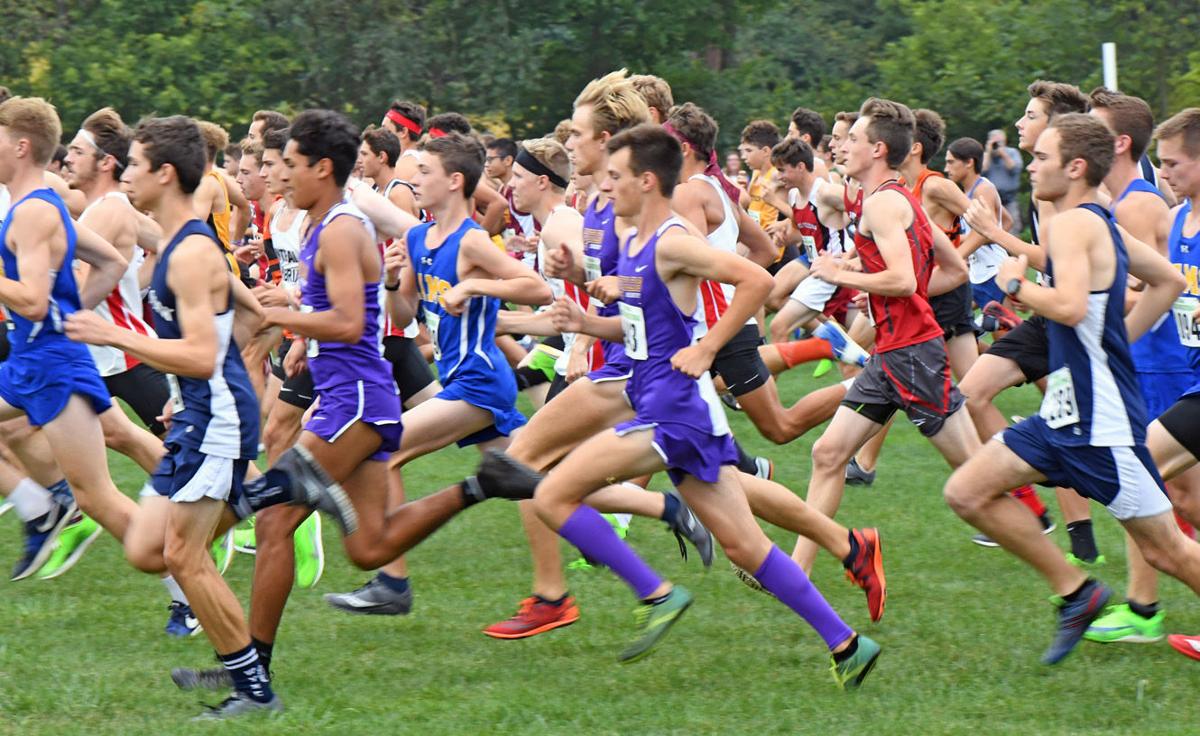 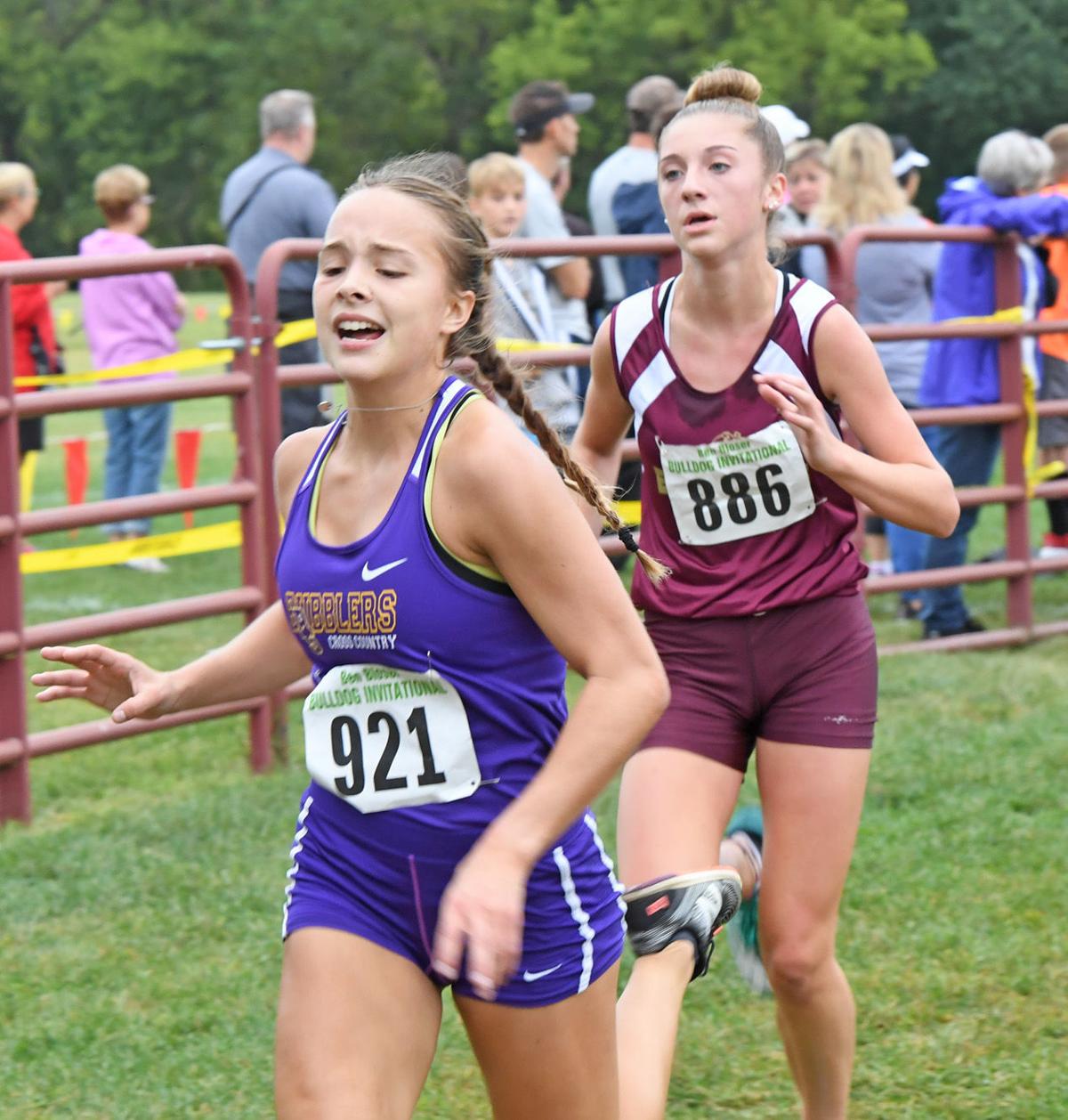 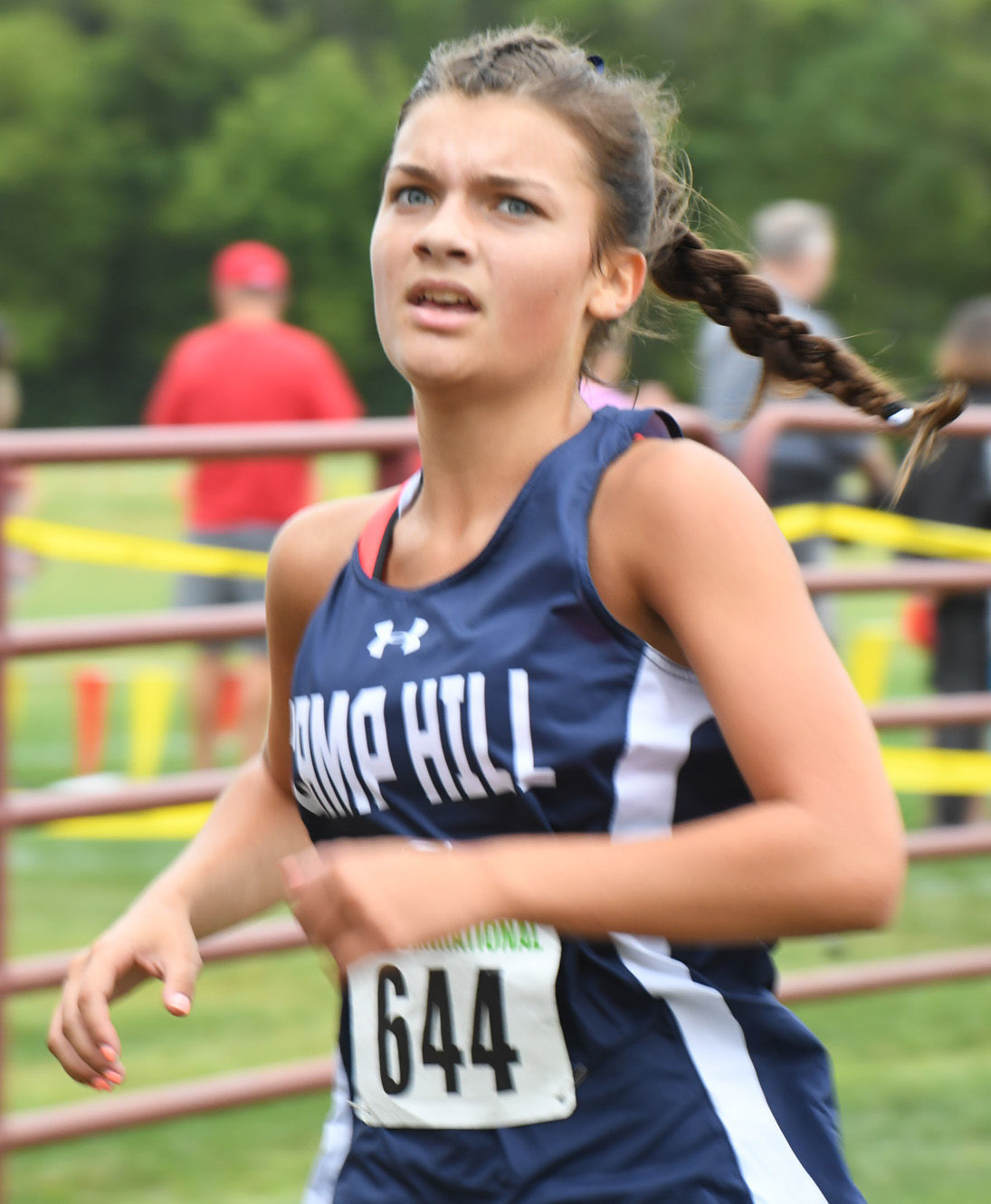 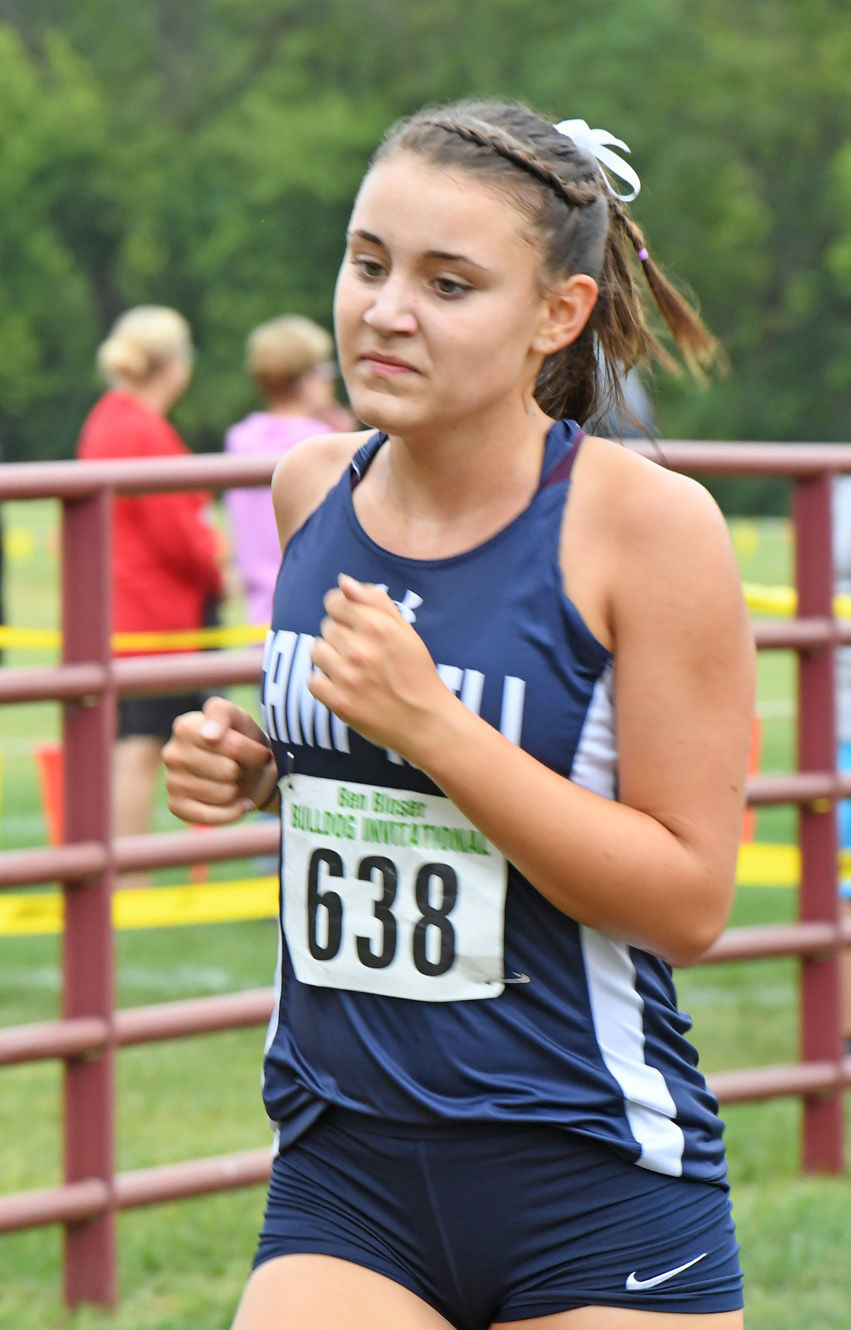 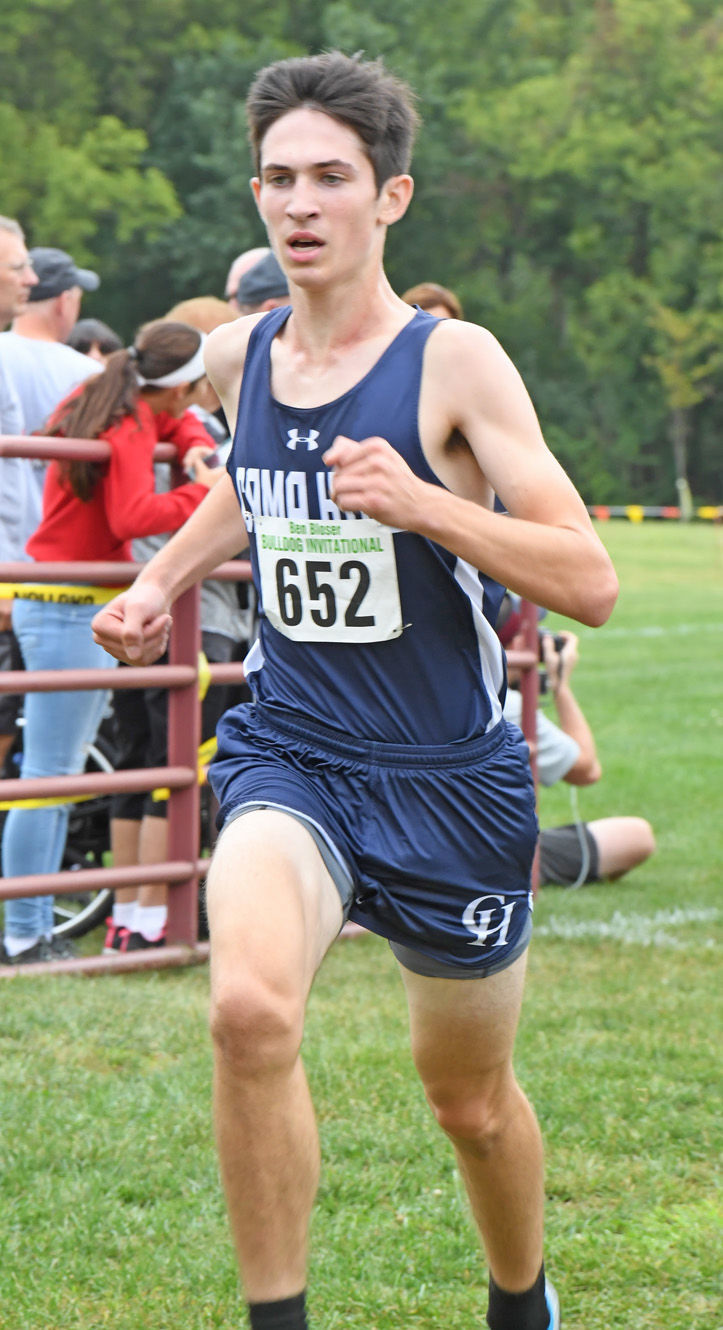 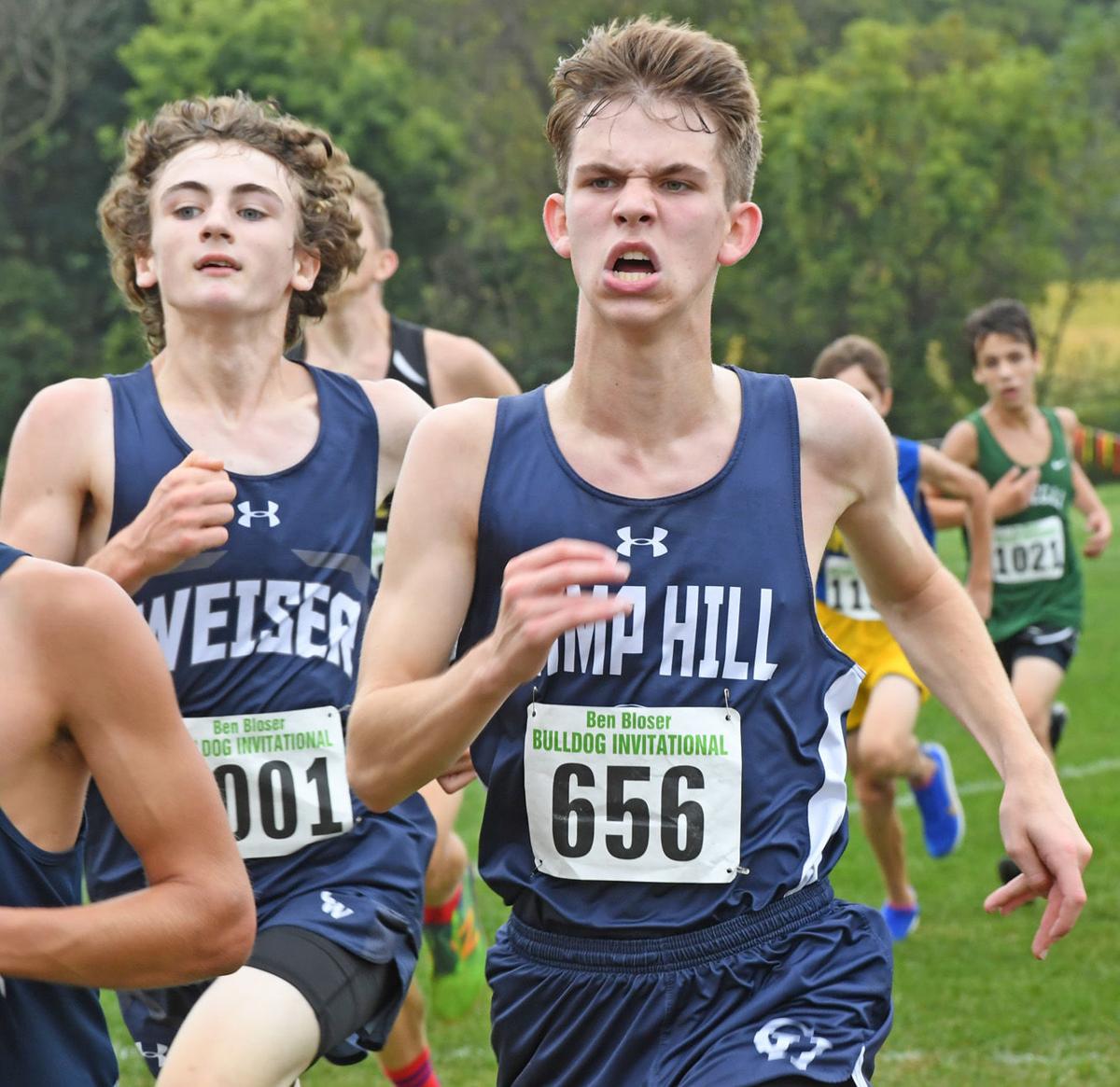 The start of the girls Class 3A race the Ben Bloser Invitational held Saturday at Big Spring High School. 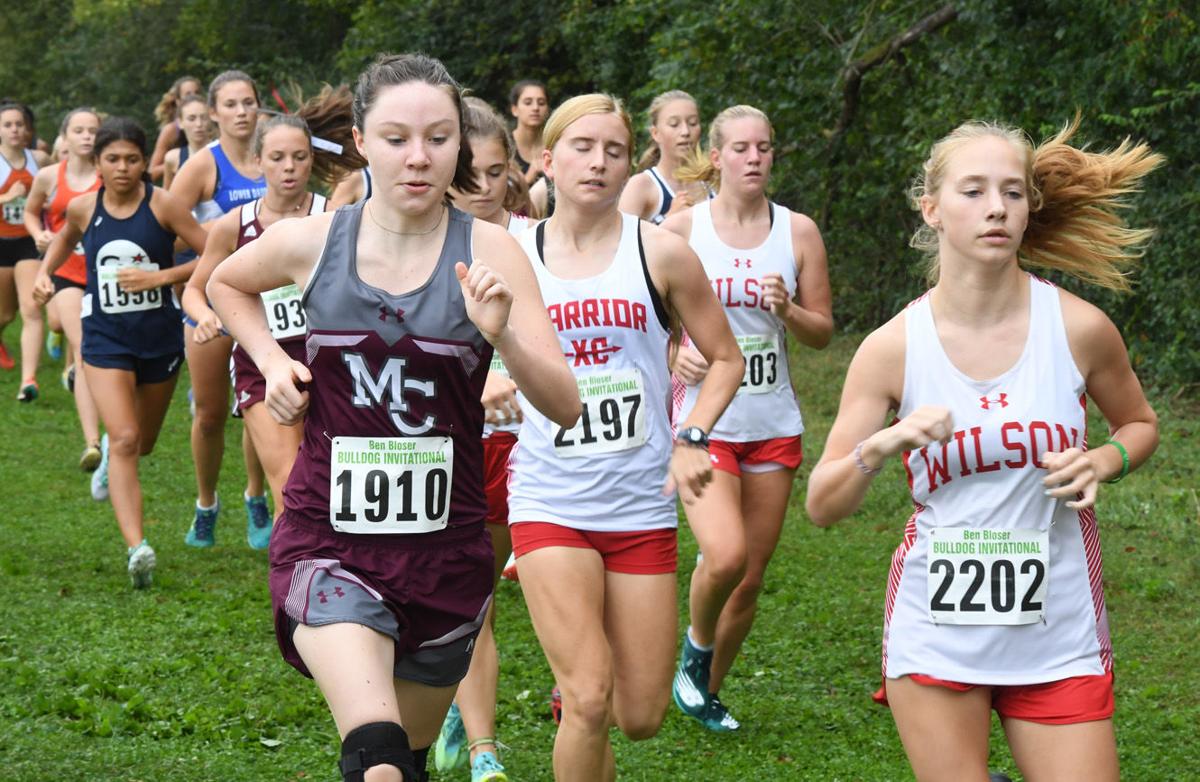 Runners near the half-mile mark in the girls Class 3A race in the Ben Bloser Invitational held Saturday at Big Spring High School.

The start of the boys Class 3A race in the Ben Bloser Invitational held Saturday at Big Spring High School. 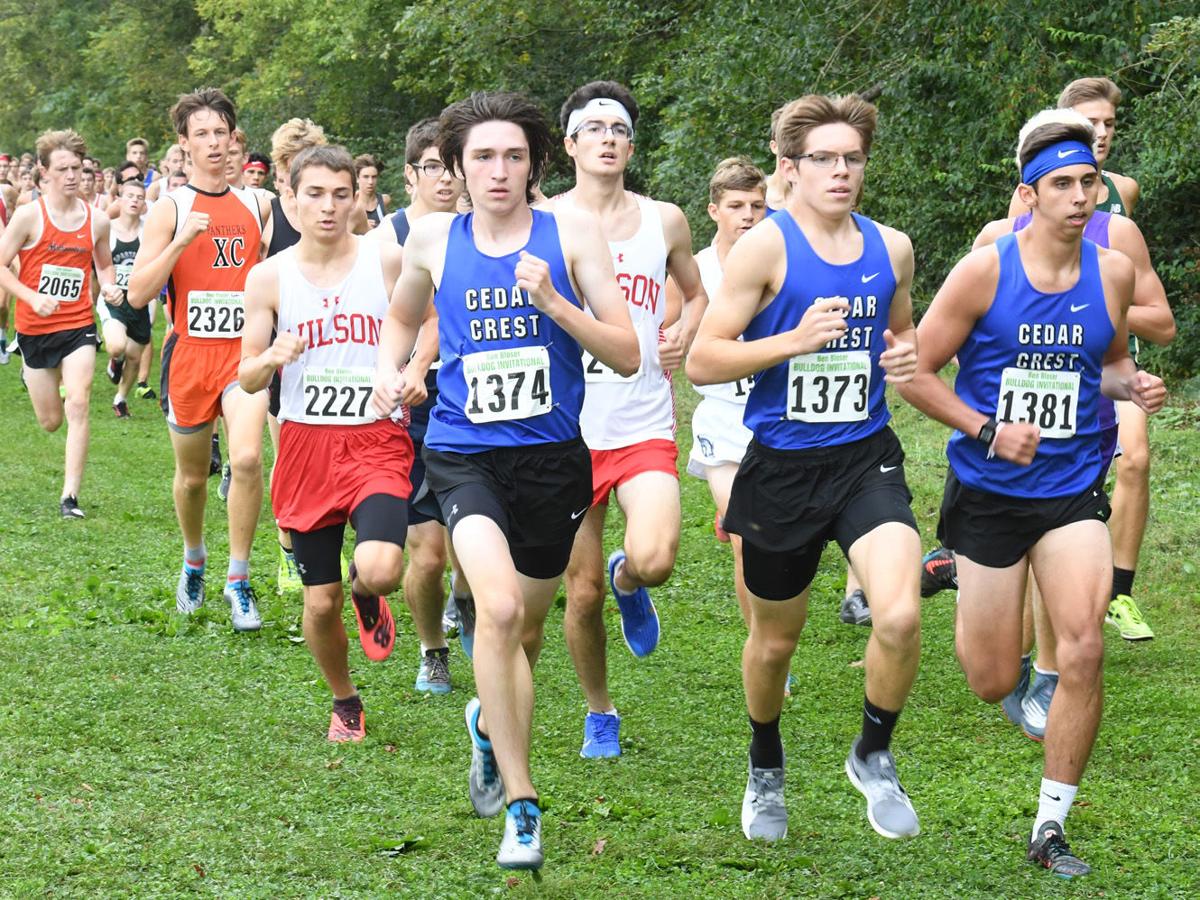 Runners near the half-mile mark in the boys Class 3A race in the Ben Bloser Invitational held Saturday at Big Spring High School. 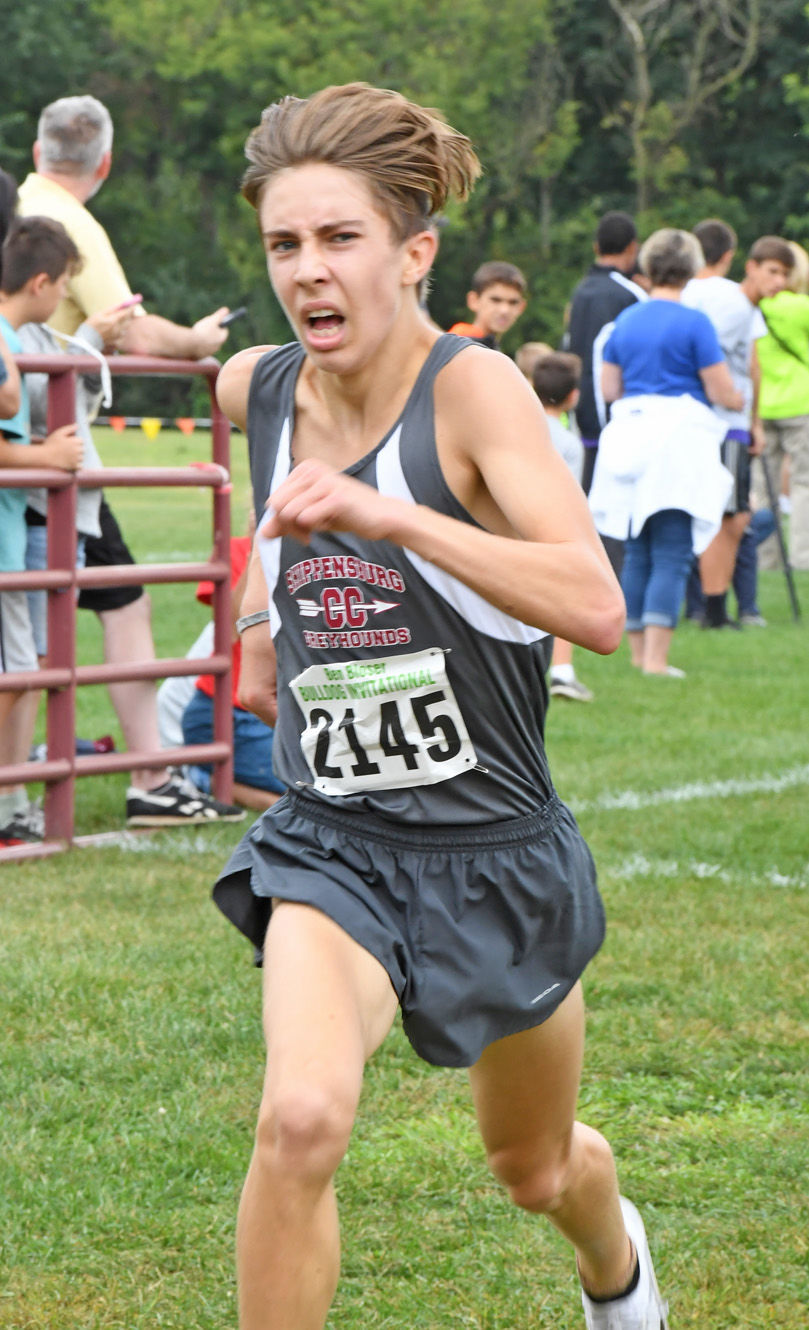 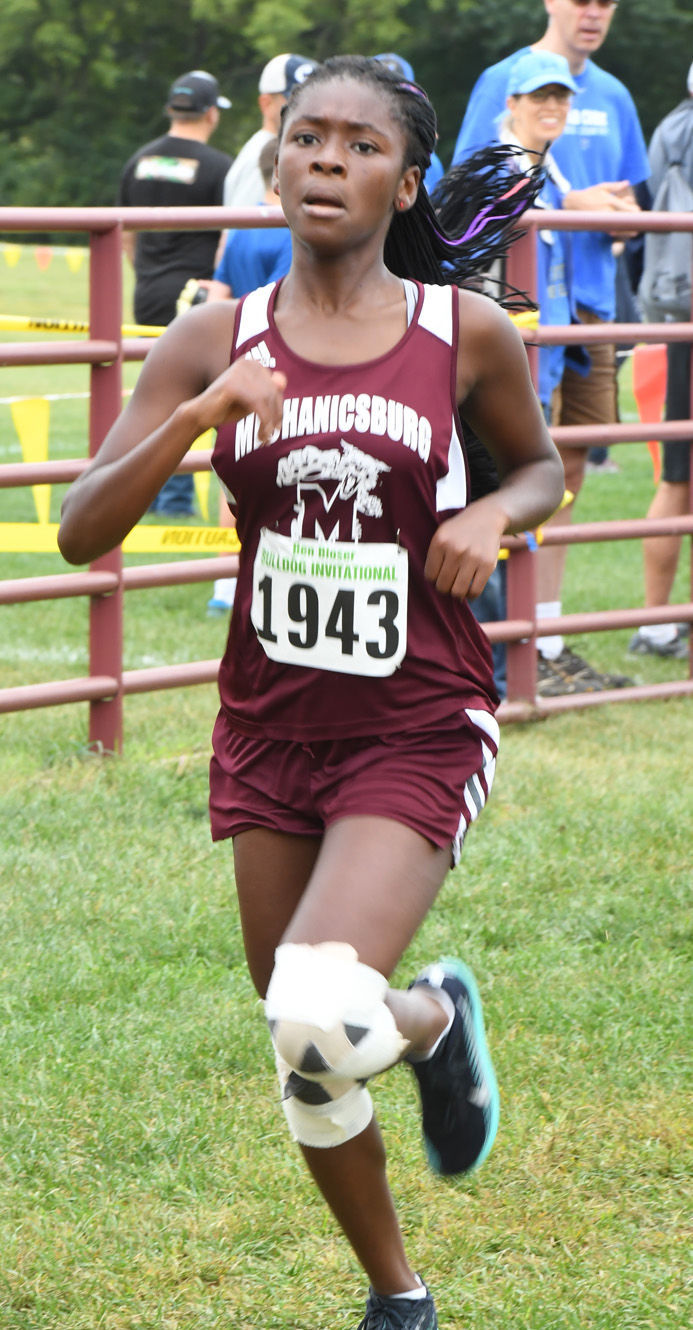 Only one local runner won any of the four races, and that was a freshman.

Boiling Springs seems to have a good one in rookie Peyton Ellis, who crushed the girls Class 1A/2A race to start the day with an 18:50.95, topping second-place Morgan Dennison (Fairfield) by 53 seconds.

“I felt good, it was a little bit humid, but I’m kind of used to that,” Ellis said. “I knew there was a bunch of hills, so I was trying to work up them, but overall I felt good.

“I knew this course was kind of fast, so I just wanted to go somewhere near sub-19, around there. So it kind of worked out for me.”

Even compared to the 3A runners in attendance, her time would’ve been seventh on the day among all girls.

She’s already impressing her competition, including Big Spring senior Gabrielle Reifsnyder, who raced against Ellis once before this season at Greencastle-Antrim during a Mid-Penn Colonial meet.

“She’s phenomenal,” Reifsnyder said. “And I think she might have actually gone the wrong way at one point [at Greencastle] and still ended up literally destroying everyone else.”

Ellis seems to have an advanced awareness of her skills and limitations, especially for her age.

She was among the leaders just a few steps out and tried to get ahead early before settling into her pace, she said. She’s more comfortable at the front of the pack.

“I just wanted to try out the course because I know there’s a bunch of big [races] at this course,” she said.

A bunch of big races she suddenly looks like she could do quite well at.

Boiling Springs’ Evan Kase is a wise old runner now as a junior.

“I feel like I’ve started to kind of figure out how to race the 5k,” he said. “In my younger and more immature years, I was going crazy fast that first mile, and then I’d die. And now I got it figured out.”

Kase posted a 16:43.81 in the boys small-school race, good for seventh behind six non-Mid-Penn runners.

It’s the same place but 29 seconds faster than he finished last year, when he and former teammate Gabe Tomblin posted Top 10 times. Kase went on to finish 32nd at the District 3 Class 2A Championship, just missing a spot in the PIAA championship.

Both Bubblers teams finished fourth in the 2A team standings, making it two straight years both schools finished at least fourth at Bloser.

As with last year, there’s room for optimism.

“So we just have a really cohesive group of guys to train with,” Kase said.

Kase said it bodes well for 2020, but when asked if this is a build year or a chance to plant a flag — both Bubblers teams are 3-0 in Colonial competition so far — he hedged a bit.

“I don’t know,” he said. “I mean, it’s still early in the season, obviously, so we got a whole lot of work to do. But come October, I guess we’ll see how that goes.”

And the boys aren’t the only ones who should be excited; the girls are notably younger and equally strong.

“Peyton is obviously crushing it, but our senior girls who have been here for four years, they’re kind of leaders and they help elevate the girls game,” Kase said.

“We’re doing good,” Ellis said. “We often talking about states a lot, we just like to talk about that. Hopefully [we get] in districts and stuff like that, trying to place.”

HS Cross Country: Boiling Springs hoping to set the stage for the rest of the season after boys finished 2nd, girls 4th

Camp Hill girls got to get a better look at their depth Saturday. With seniors Laura Sakol and Kaitlyn Vorkapich nursing injuries and unavailable in this one, Julia Raich said, the Lions still coasted to a first-place finish in the team standings, beating Annville-Cleona by 30 points.

“Yeah, it did [help our depth],” Raich said. “I think three or four people ran PRs and everyone [else] almost did.”

The Lions are the two-time reigning District 3 Class 1A champs and a heavy favorite to do so again with last year’s entire starting lineup back again. And PA MileSplit ranks the Lions second in the state at 1A.

“I feel like as a team we’re just a lot stronger this year,” Raich said. “We prepared a lot more.”

The Bulldogs girls finished seventh at their home invite, led by Reifsnyder’s 20:26.97, which placed her fifth.

“I know I just didn’t want to start out super-fast because that’s the trend for this race,” the veteran said. “Start off comfortable, and then try and work my way up.”

Red Land’s Aiden Gondor was the top 3A finisher among all locals, boys or girls, running a 16:17.19 for fifth in the boys race. That topped a pair of Shippensburg runners, Eli Spence and Hayden Hunt, who finished a second apart for seventh and eighth, respectively.

“I definitely hit about as good as I can do today,” said Gondor, who added he focused on weight training, agility and speed work in the offseason. “Yeah, race plan worked well, it went the way I wanted it to, and I finished as strong as I could even though it didn’t look like it.”

The Patriots finished 10th, while the Greyhounds ended fourth, led by a large junior class.

It was a quiet day for locals in 3A girls, with Mechanicsburg’s Olivia Walter posting a 20:00.80, just shy of her goal, to lead the contingent in 23rd.

“That was my PR so far, so I definitely can’t ask for any more,” she said. “I left it all out on the course.”

It’s not uncommon to see high school cross country runners cross the finish line, look down at their wrists and click a button on their watch.