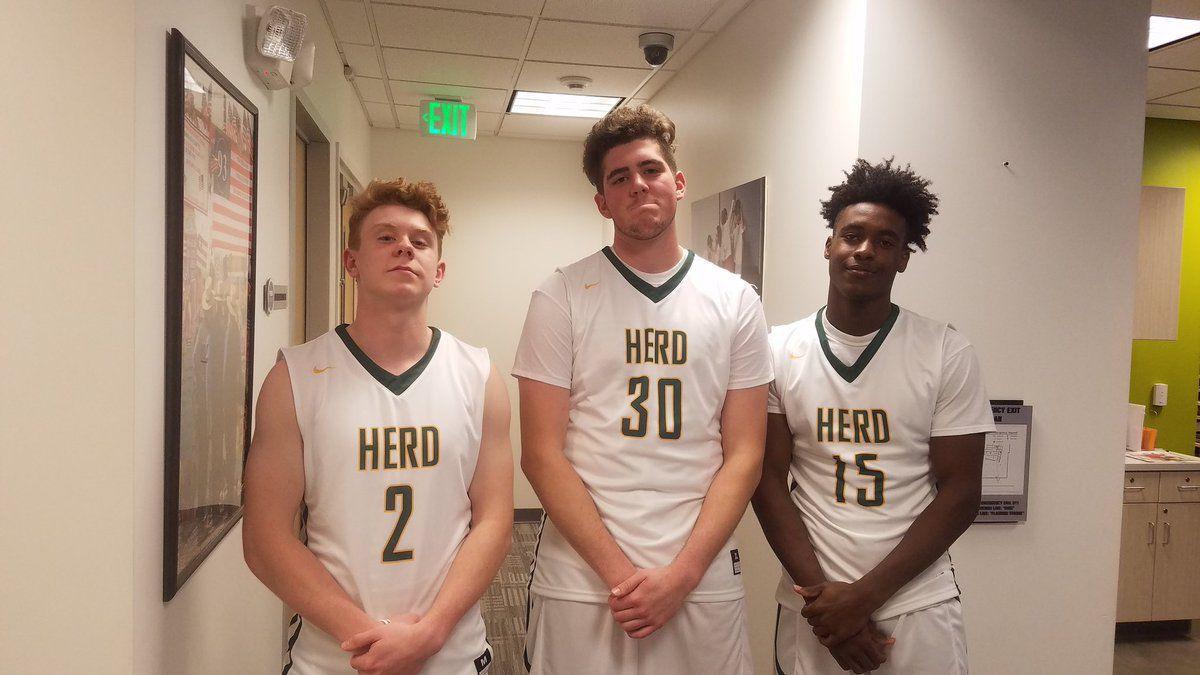 Carlisle’s Ben Milligan, Ethan Houston and Deshawn Millington show off the new uniforms the basketball team will wear this season during Mid-Penn Media Day held Tuesday at The Patriot News. The jerseys are throwbacks that should bring to mind some of the great 1980s teams. 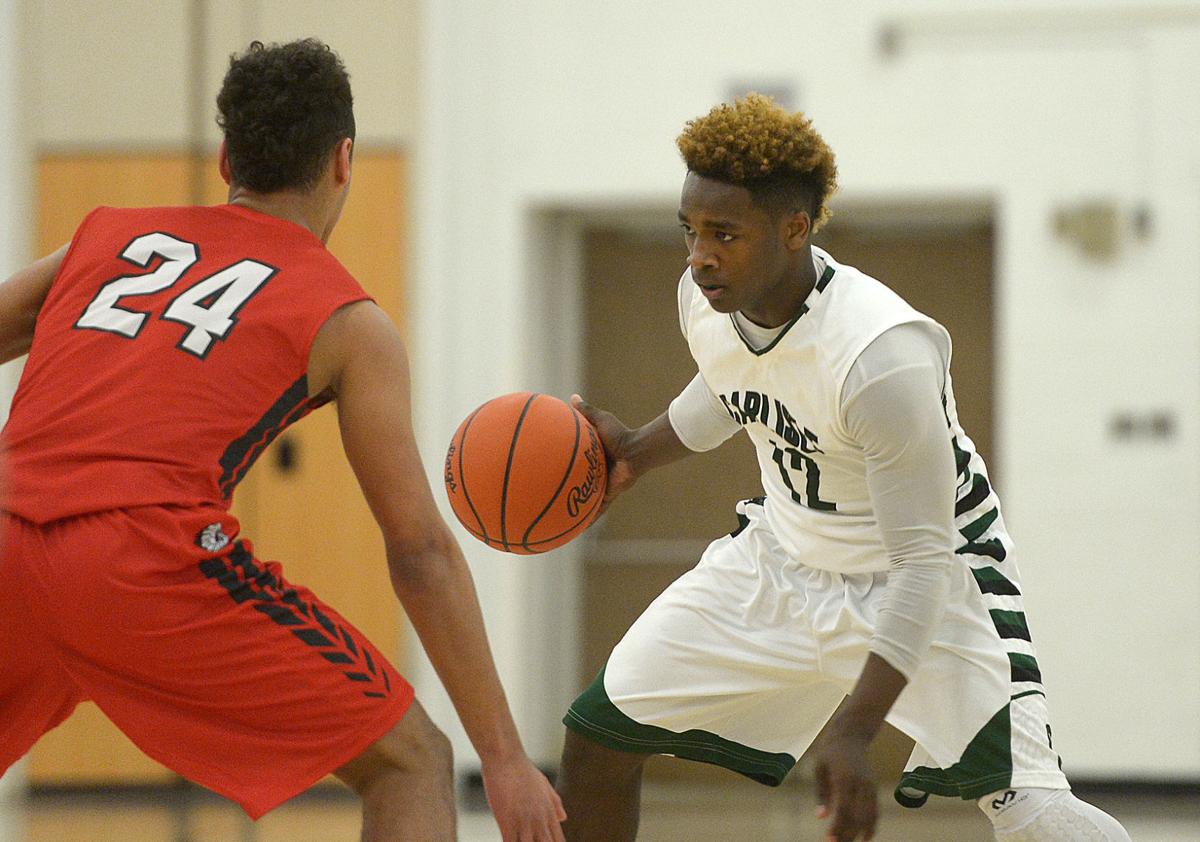 Carlisle’s Gavyn Barnes, right, now a junior, could be primed for a breakout this season, according to coach Andre Anderson. 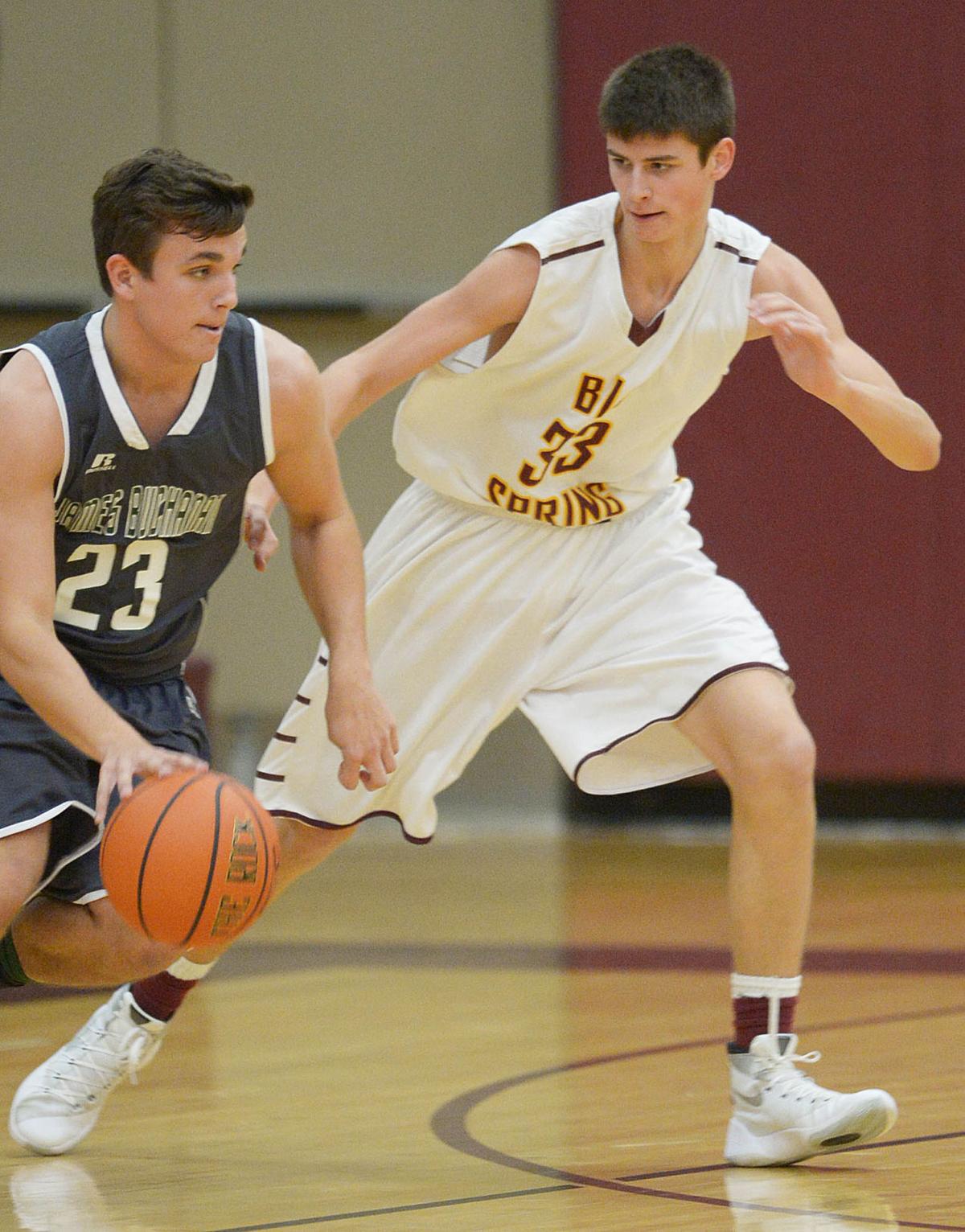 Big Spring’s Peyton Bechtold, right, is one of the many faces returning to the Bulldogs this season.

HAMPDEN TWP. — Carlisle strolled into Tuesday’s Mid-Penn basketball media day at The Patriot News offices flashing a new uniform, even if it looks quite familiar to long-time fans.

The Thundering Herd, fresh off a PIAA Class AAAA quarterfinal appearance, the team’s farthest run in decades, looked an awful lot like some of those elite 1980s teams headlined by Billy Owens.

Carlisle will roll with white home threads, with green numbers with yellow trim and “HERD” across the chest.

This isn’t the four-time state champs, but if this iteration of the Green and White has anything to say about it, they want to get a step closer to the glory days. And the retro jerseys show it.

“Our expectation is always to get one step further than what we did,” coach Andre Anderson said. “We still have guys, key pieces from (last year).”

The Herd return elusive guard Deshawn Millington along with sharpshooters Gavyn Barnes and Ben Milligan. Center Ethan Houston and forwards Nate and Ki Barnes are also back. In all, six of the Herd’s top eight from last season are back.

“We got six guys returning that played significant minutes, and we’ll go to battle with those guys any minute,” Anderson said. “We’re just excited to get things rolling.”

The Barnes cousins will be key for Carlisle’s return to states. Nate is the bruiser, Ki has the build of a dynamic shooter and defender, and Gavyn is a spark plug. Anderson said Gavyn, a junior and among the smallest on the team, has been rearing to go all season.

“Don’t sleep on Gavyn,” Anderson said. “Gavyn is full of confidence from the football field.”

Carlisle’s season begins with its annual Carlisle Classic tournament, which will be held Dec. 9-10.

Carlisle’s road back won’t be easy in the Mid-Penn Commonwealth.

Harrisburg’s uncharacteristic early exit in the District 3-AAAA tournament is history and the Cougars will be a serious threat once again. State College and Chambersburg will also be hard outs.

“Since I’ve been here our league is the most balanced, top to bottom, that it’s been,” Hibbs said.

Bulldogs looking for next step

Jason Creek’s tenure at Big Spring, his alma mater, has been on a mostly upward trajectory.

The Bulldogs finished with nine wins last season, their best finish in a while, and are looking to make a run this time at a District 3 Class 5A playoff spot.

“We have pieces, we have experience now, we have some youth that we gotta get ready, but we feel like we’re gonna be more competitive than ever,” Creek said.

Who steps up for Cats?

Cade Alioth and Kyle Scheib are expected to improve on quality seasons last year, when Alioth averaged nearly a double-double.

But coach Bob Strickler expects to get some more help from Shane Homick and others.

“He flew a little under the radar last year behind Kyle and Cade,” Strickler said. “I think Shane’s that sort of uncontrollable variable in our arsenal.”

Strickler also hopes to get big things from Nathan Mayernick and Adam Laudenslager this season.

“A lot of it’s going to be can Mayernick fill a little bit of what (Nathan) Vrabel did?” he said. “And we got Adam Laudenslager as our other senior that should probably start — can he play good defense and take care of the ball?”

Red Land’s Mike Zangari and Cedar Cliff’s Tigh Savercool are two of the new faces in the Mid-Penn coaching ranks, and Zangari was the youngest coach in Pennsylvania at the time of his hire.

Both said they’re settling in nicely in their new digs, although Zangari is making a return to his alma mater.

“I’m pretty much there now,” the rookie coach said. “Obviously I’m going through a lot of first experiences in coaching because I just stopped playing not even a year ago.

“Obviously being able to coach for your alma mater is a dream for anybody who’s ever played for their school.”

Savercool brings a little more experience after coaching at Tulpehocken.

“I don’t think the program’s in a position where we have to rock the boat,” he said. “Coach (Jim) Rowe did a really good job of instilling a really good basketball IQ in these kids.”

Carlisle’s Ben Milligan, Ethan Houston and Deshawn Millington show off the new uniforms the basketball team will wear this season during Mid-Penn Media Day held Tuesday at The Patriot News. The jerseys are throwbacks that should bring to mind some of the great 1980s teams.

Carlisle’s Gavyn Barnes, right, now a junior, could be primed for a breakout this season, according to coach Andre Anderson.

Big Spring’s Peyton Bechtold, right, is one of the many faces returning to the Bulldogs this season.