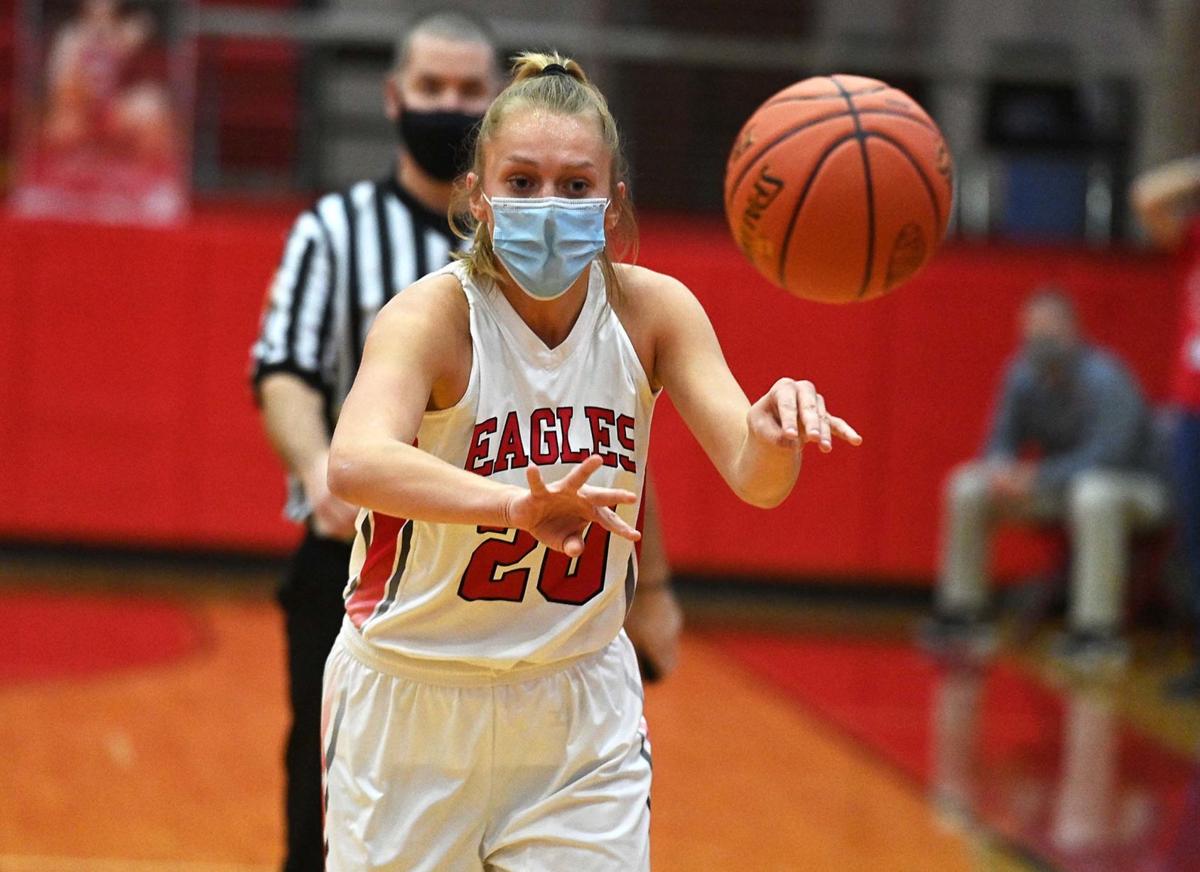 Cumberland Valley’s Julie Jekot, passes the ball during the first quarter of their game against Wilkes-Barre Area in the PIAA Class 6A quarterfinals at Cumberland Valley Friday night. 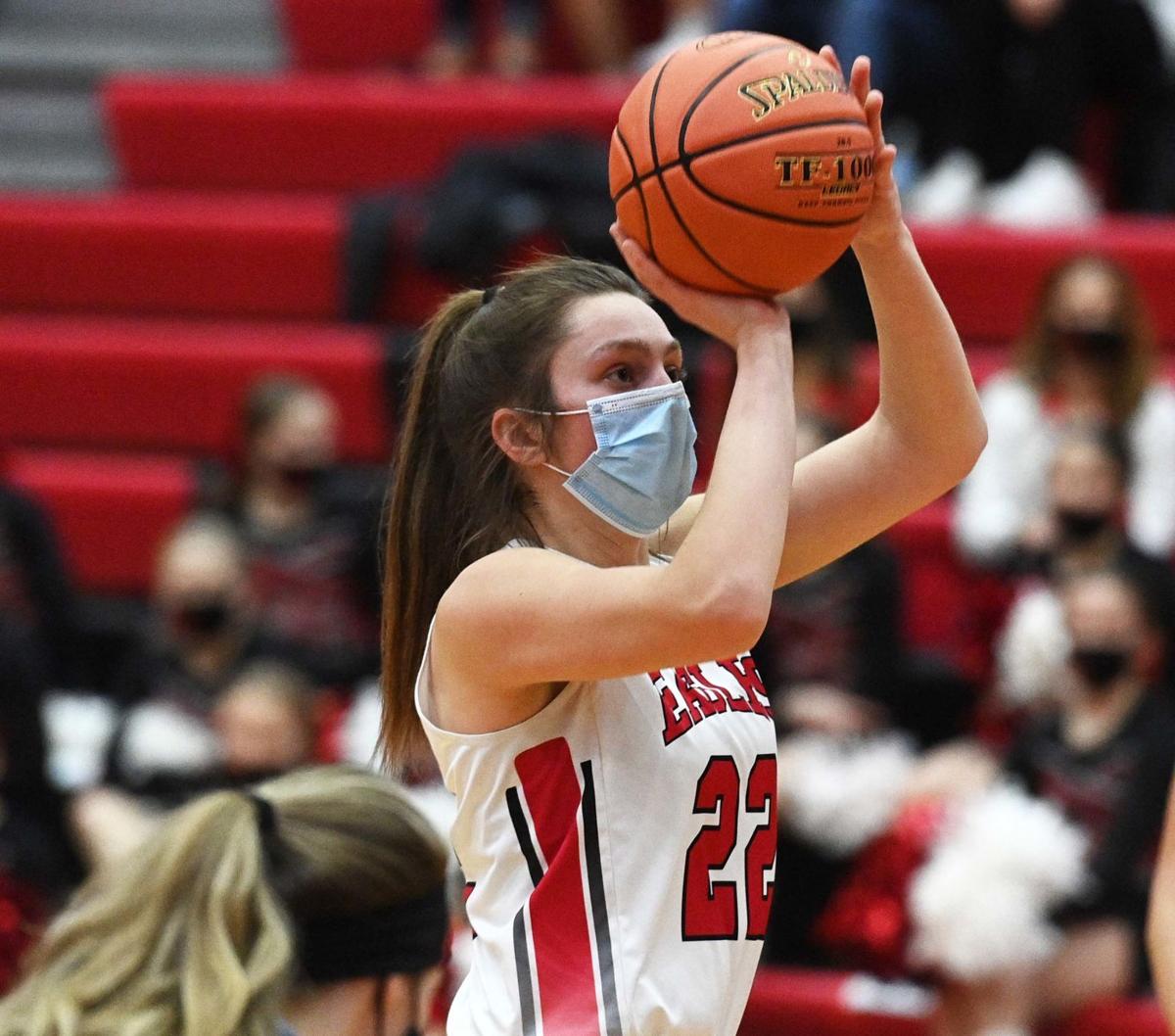 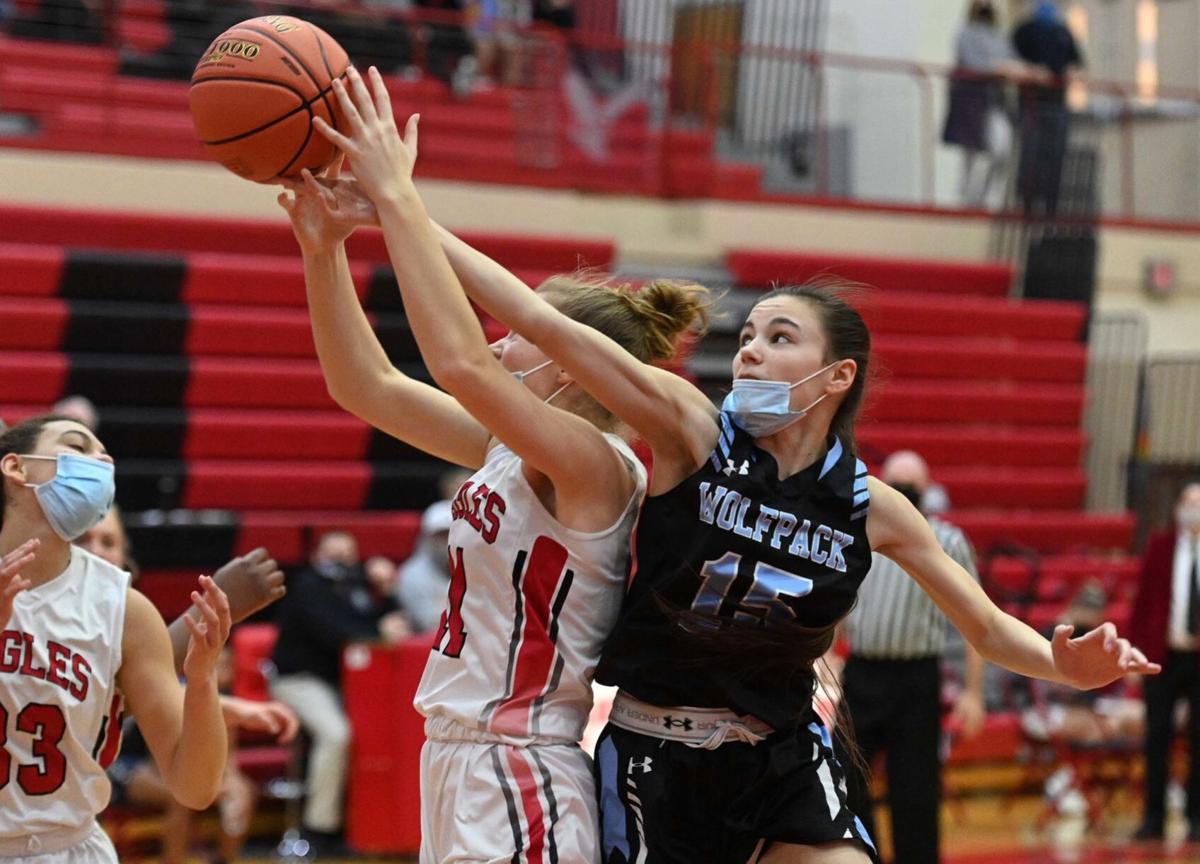 Cumberland Valley made Wilkes-Barre look every bit the part of a PIAA newcomer.

The Eagles hounded, harassed and blitzed the Wolfpack in Friday’s Class 6A girls basketball quarterfinal, to the tune of a 67-23 victory to open up what they hope is a fruitful state tournament over the next eight days.

“It’s just unreal,” said senior Julie Jekot, who now has a semifinal appearance to her name like older sisters Katie and Kelly, who won three straight state titles from 2014 to 2016. “We didn’t even think we were gonna have a season.”

“It feels so special, and I credit that to everyone on this team,” fellow senior Abbie Miller said. “There’s no one player that can say, ‘I’m the one who did this.’”

CV (21-1) was without its skipper, head coach Bill Wolf, who missed the game for “personal” reasons, assistant coach Jim Poole said. Poole did not clarify the reason but said Wolf is expected back this weekend and will be ready to coach the team in Monday’s state semifinal at Altoona High School at 6 p.m. against championship favorite North Allegheny.

PIAA Girls Basketball: Trinity's season comes to an end at the hands of Notre Dame-Green Pond in Class 3A opener

“I told the girls tonight, ‘Girls, with all the craziness of the season, you’re right where you wanna be,’” Poole said.

The Eagles’ only challenger Friday night was themselves. Adrenaline got the best of them in the opening minutes as they shot just 5-of-15 from the field.

But stifling defense — CV forced 23 Wolfpack turnovers, including 16 in the first half — gave the offense plenty of time to get into a rhythm. And once the shots started falling, they didn’t stop. The Eagles finished 27-of-55 on the night and blew the game open for good with an 8-of-19 second quarter to take a 36-10 halftime lead.

Hill bottled up Wolfpack leading scorer Gloria Adjayi, who entered the night averaging 14 points and was held to just six. Adjayi got few clean looks, finishing just 2-of-9 from the field while grabbing six rebounds.

But Hill exited with what looked like an ankle injury midway through the second quarter and did not return. Poole said it’s a recurring injury, one she suffered last week. CV will find out over the weekend what her status is going forward.

Down a head coach and their starting interior defender, the Eagles turned to backup Parris Burns. And Burns didn’t miss a beat, continuing the type of shut-down defense the Eagles are accustomed to.

“For the most part it’s just plug in Parris,” Julie Jekot said when asked if they made any other defensive adjustments with Hill out.

CV led just 12-6 after eight minutes, but by halftime had effectively ended any doubt as to who would be moving on.

The Jekot sisters played a solid two-man game with a handful of assists to each other leading to 17 points between them, including 10 from Julie.

The senior, Julie, finished unofficially with three steals and three assists to go along with her game-high 17 points.

HS Girls Basketball: Cumberland Valley's Abbie Miller wants to be 'something special' at Shippensburg University like her Hall of Fame aunt

The freshman, Jill, swatted away two shots with her 6-foot frame and added seven official rebounds.

“I think the main difference is we have Jill,” Julie said. “She’s an amazing point guard.”

The semifinal berth is the fifth of the Wolf era at Cumberland Valley — he also made the final four twice while leading Central Dauphin.

Next up is the top-ranked team in the state, per TribLive.com, 25-1 North Allegheny.

The Eagles, ranked fourth entering the week, will have to contend with a team that at one point had a 30-game win streak. The Tigers are led by senior guard and Penn commit Lizzy Groetsch, Louisville volleyball pledge and senior forward Paige Morningstar and sophomore guard Jasmine Timmerson. They were a state quarterfinalist a year ago when the pandemic ended the season.

“They’re the No. 1 team in the state for a reason,” Poole said of the District 7 champions that beat McDowell 60-30. “They’re well coached. … They all can shoot the 3, they can handle the ball well.”

The winner of that semifinal books a trip to Hershey’s Giant Center on March 26 for a chance a gold.

There will be no title for a senior class that includes Julie Jekot, Abbie Miller and Parris Burns. No fifth title in Cumberland Valley history, not until 2022 at the earliest.

Cumberland Valley’s Julie Jekot, passes the ball during the first quarter of their game against Wilkes-Barre Area in the PIAA Class 6A quarterfinals at Cumberland Valley Friday night.