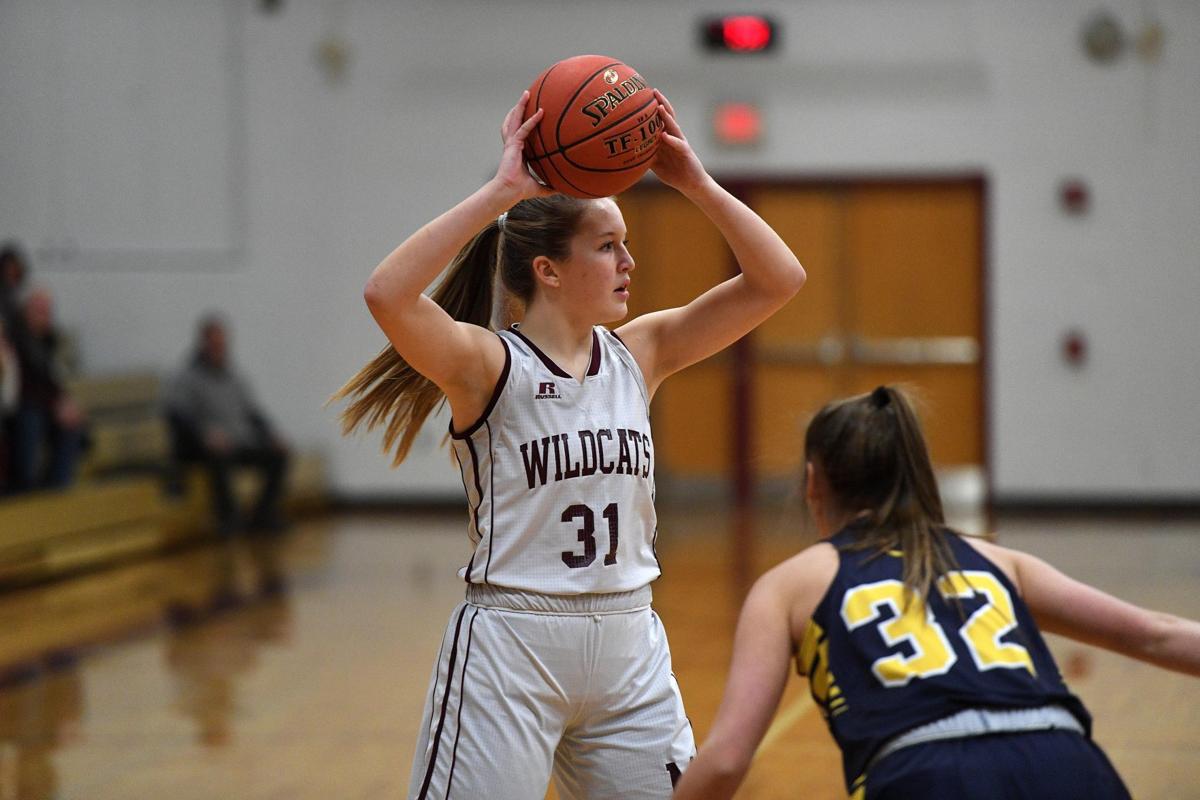 Mechanicsburg’s Logan Nutt, back, is one of two returning starters for a Wildcats team that made the PIAA playoffs a year ago. She's hoping to replicate that success this year. 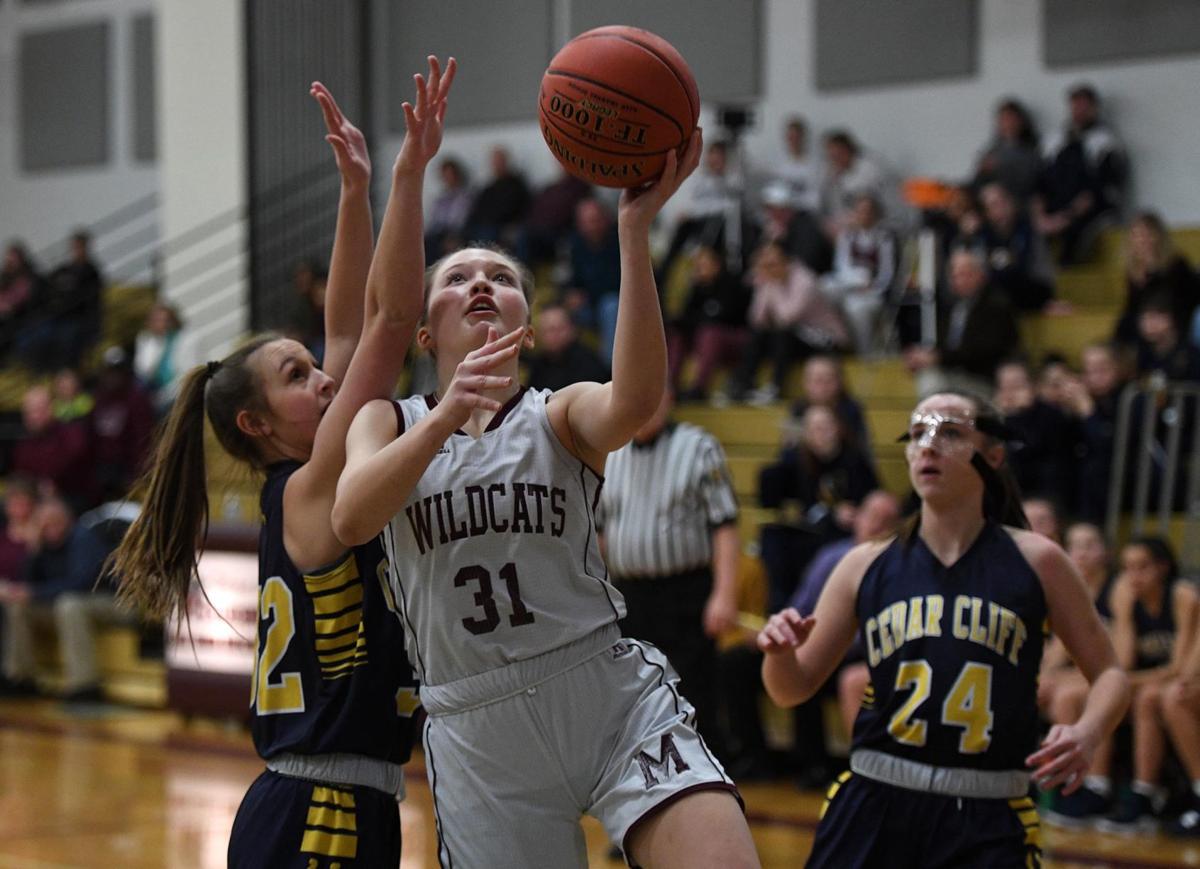 Mechanicsburg’s Logan Nutt, center, is expected to take on a heftier scoring role this season after several key pieces graduated in the spring.

Logan Nutt has already checked some important boxes off for her high school basketball career.

Last season, the Mechanicsburg forward played a key role helping the Wildcats return to the postseason after a one-year hiatus. The team piled up 21 wins and earned a berth in the state playoffs.

During November’s early signing period for basketball, Nutt signed a national letter of intent for Mansfield University, securing a spot with the Division II program before she takes the court for her final scholastic season.

With plenty of on-court success already under her belt, and her basketball and educational future determined, Nutt is ready to embrace the present with the Wildcats.

And she’ll be able to check off one more thing from her basketball list — being a senior leader on a squad that graduated seven seniors, including two starters, from last year.

“After signing, I’m really looking forward to just having fun,” Nutt said. “I’ll be watching and supporting my team for next year, but I’m also ready for this year. I really just want to pass down any wisdom or any information to the girls, whether it’s on the court or off the court. We’ve got a lot of good young girls, and I want to help them get as good as they can be before I leave.”

That’s exactly what Wildcats head coach Clay McAllister likes to hear from the 5-foot-11 forward, who is one of two returning starters for Mechanicsburg.

The girls basketball season tips off Friday. We get you prepared for the season openers with preview capsules of our local teams, including key returning players and newcomers to watch.

Graduation losses dinged the Wildcat backcourt, which likely means Nutt’s role will expand from the one she played in last season’s perimeter-oriented set when she averaged 6.5 points per game.

“She’s got to be a leader for us,” McAllister said. “She probably has to get more touches than she got last year, when you had Rylee [Everett], Abbey Engle and Megan Schrass, and those guys catching and shooting 3s. It’s going to look a little different this year, and Logan is probably going to get more touches.

Really, we need her to carry herself like those guys carried themselves and bring the young kids along.”

Nutt seems ready for the task with her college commitment showing her advancement over the course of 2019.

She caught the attention of the Mansfield staff on the summer AAU circuit, where she plays under longtime York Catholic coach Kevin Bankos. The Mountaineers didn’t face a tough sell with Nutt, who said she came away impressed with the school and team after her initial visit.

Getting the commitment done gives Nutt some peace of mind as she enters the season knowing that one of the more stressful aspects of the campaign has already been dispensed with.

She’ll now look to emulate the blueprint laid out by the Wildcats’ Class of 2019, a group that was determined to return Mechanicsburg to prominence after an eight-win season the year prior.

HS Girls Basketball: Rising from the ashes, a disappointing 2017-18 season made Mechanicsburg a deeper, stronger team

“We had a lot of girls who were really dedicated and passionate about making a comeback, and we carried that all the way through the season,” Nutt said. “We want to do that again this year. We lost a lot of our bench and a lot of our starters, so I think we really want to keep that mindset that we had, that we wanted to prove people wrong. We lost people, but we’ve got a lot of good young girls coming in and they want to do the same thing.”

She will also have expanded responsibilities this season for Mechanicsburg, which seeks to capitalize on the versatility and athleticism Gilliard brings to the table by again adopting the up-tempo style that helped foster success a year ago.

“We have three people now starting who did not start varsity before, and a lot of other new players,” Gilliard said. “For Logan and I, it’s just about being that voice and that communicator to them, explaining everything and kind of setting the expectation of what it is to be a varsity starter and how to carry yourself.”

Gilliard was one of those underclassmen starters a year ago, and her quick success gives the Wildcats optimism that they can strike again with the same formula.

“We had success last year with two sophomores in the starting lineup, and one reason that happened is that those seniors embraced them and brought them in and recognized that they were going to help them win,” McAllister said. “We’ll have two sophomores in the lineup again this year, and we’ll need Logan and Talia and Jenna [Skurcenski] to do the same thing for those guys.”

Mechanicsburg opens its season Friday against Manheim Township in the first round of the Manheim Central tip-off tournament.

Mechanicsburg remains unbeaten, thanks to another big night from Emma Castilla, Talia Gilliard and a strong second half from Logan Nutt.

Talia Gilliard displayed deft defensive touch, her game-breaking transition speed and her array of scoring abilities from range and the paint. She's got Mechanicsburg at 13-0.

Defenses can't keep up with her in transition. They can't stop her from range. They can't bottle her up in the paint. The county's most unguardable player, Talia Gilliard, has the Wildcats right where they belong.

Mechanicsburg’s Logan Nutt, back, is one of two returning starters for a Wildcats team that made the PIAA playoffs a year ago. She's hoping to replicate that success this year.

Mechanicsburg’s Logan Nutt, center, is expected to take on a heftier scoring role this season after several key pieces graduated in the spring.