Cumberland Valley struggled to shoot the ball all evening against an undersized Carlisle Thundering Herd squad Monday, but finally pulled away in the final minutes for a 53-43 win in a Mid-Penn Commonwealth boys basketball matchup.

Carlisle (8-8, 6-6 Commonwealth) played without freshman Jaydon Smith, out for the season with an injury and wearing a walking boot. The Herd played big man Nick Stiltner in the paint, but the Eagles’ size eventually wore the Herd down.

The Eagles (12-4, 9-3 Commonwealth) pounded the ball in the paint after the first quarter to use their size advantage. They scored nine buckets in the paint in the first half and finished the game with 16. All within the paint.

The Herd led 7-3 after a 3-pointer by Snyder, but a timeout by CV coach Dave Vespignani stemmed the tide.

A 10-point run (eight from Gilbert) and a later eight-point run (six from Drury) late in the second quarter gave the Eagles a lead they never gave up. The Herd cut the deficit down to 37-36 on another trey by Snyder, but enough trips to the foul line over the final 5 minutes enabled CV to finish out the game.

Sherry and Drury led the Eagles with 17 and 16 points respectively. Drury added two dunks in the contest. Gilbert tallied 10 points in the first half to pace CV early.

Eric Ruiz hit three 3-pointers on his way to leading the Herd with 17 points. Dylan Young and Snyder ended the game with 11 and 10 respectively.

Eagle coach Dave Vespignani on his season, “With no summer league, no spring workouts, a limited preseason, and we get into the season then we have three weeks off and the weather, it has been hard to get into that flow and we have to develop the mindset that we are just going to have to grind it out. I have told this team we might have to win some ugly games. The objective is to outscore the other team at the end of the night and I am proud of our guys for that tonight.”

Herd coach Andre Anderson on his team’s effort, “We battled hard and I can’t ever fault our effort on the court tonight. We played well on the defensive end in the first half, but each time we got the game close, we made a mistake — a bad pass, a bad shot or we didn’t hustle back on defense. I thought Eric Ruiz gave us a great game tonight. We just didn’t have enough size tonight to battle them on those second shots.”

Shippensburg's Jayden Statum was among the Mid-Penn's best in scoring, rebounding and playmaking, making him a worthy POTY. Find out where other locals landed on this year's All-Sentinel team. 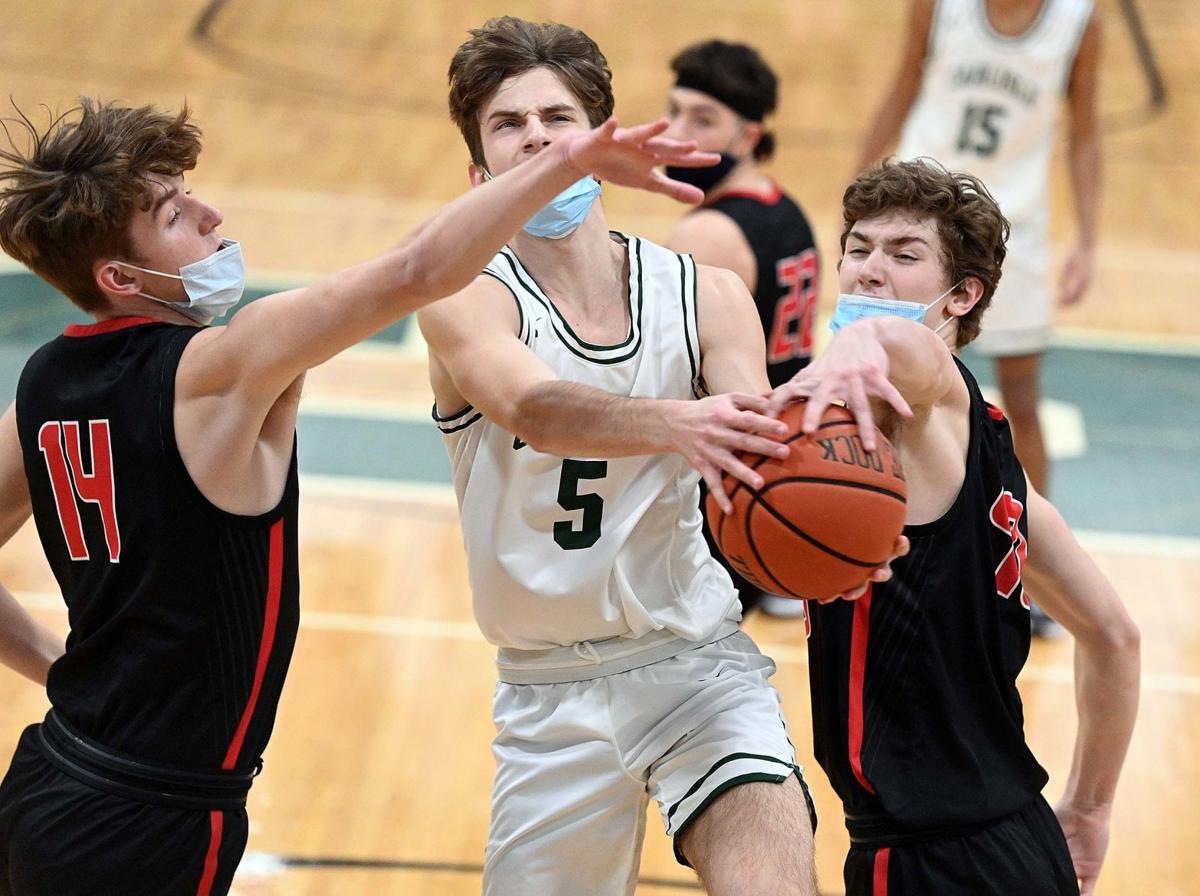 Carlisle’s Cam Lyons, center, gets stopped under the net by Cumberland Valley’s Nolan Gilbert, left, and Ben Drury during the first quarter in a Mid-Penn Commonwealth game Monday night at Carlisle High School. 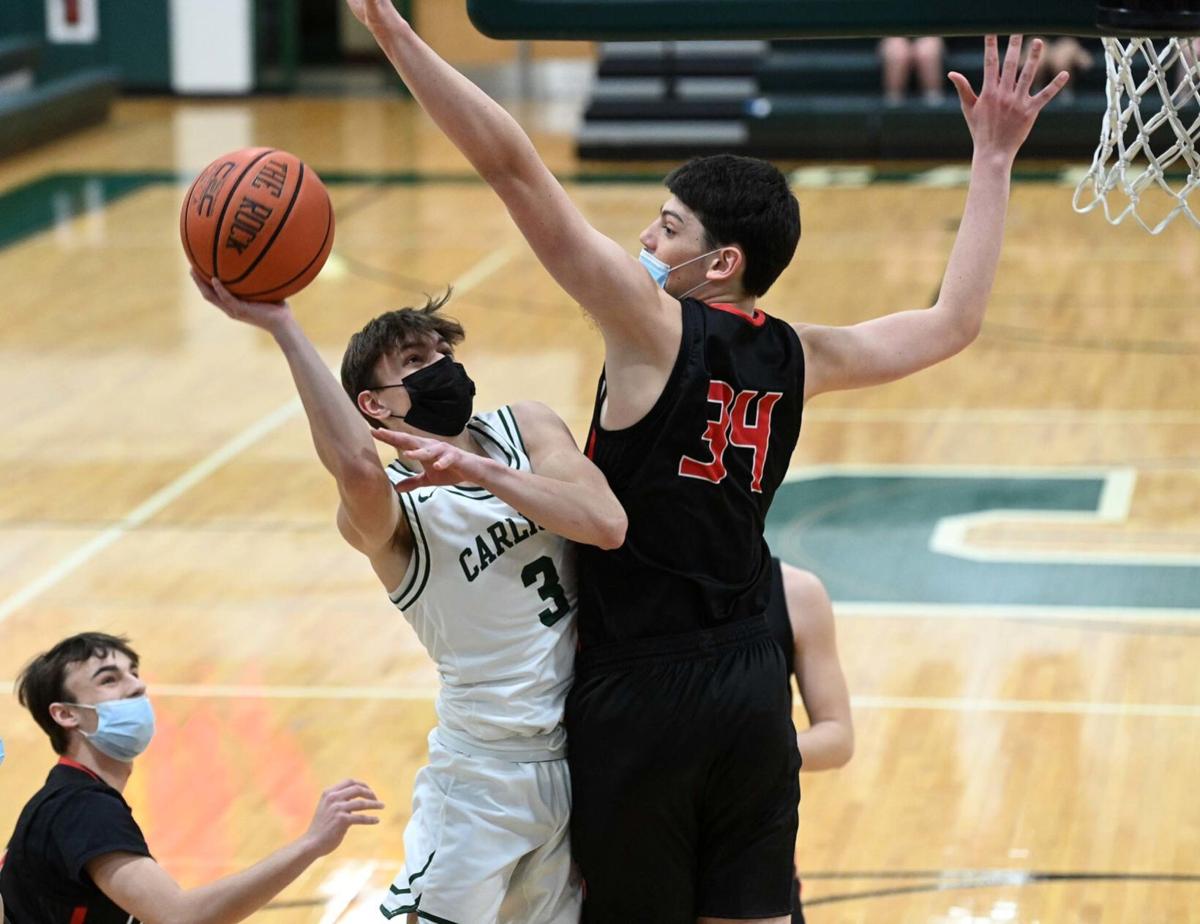 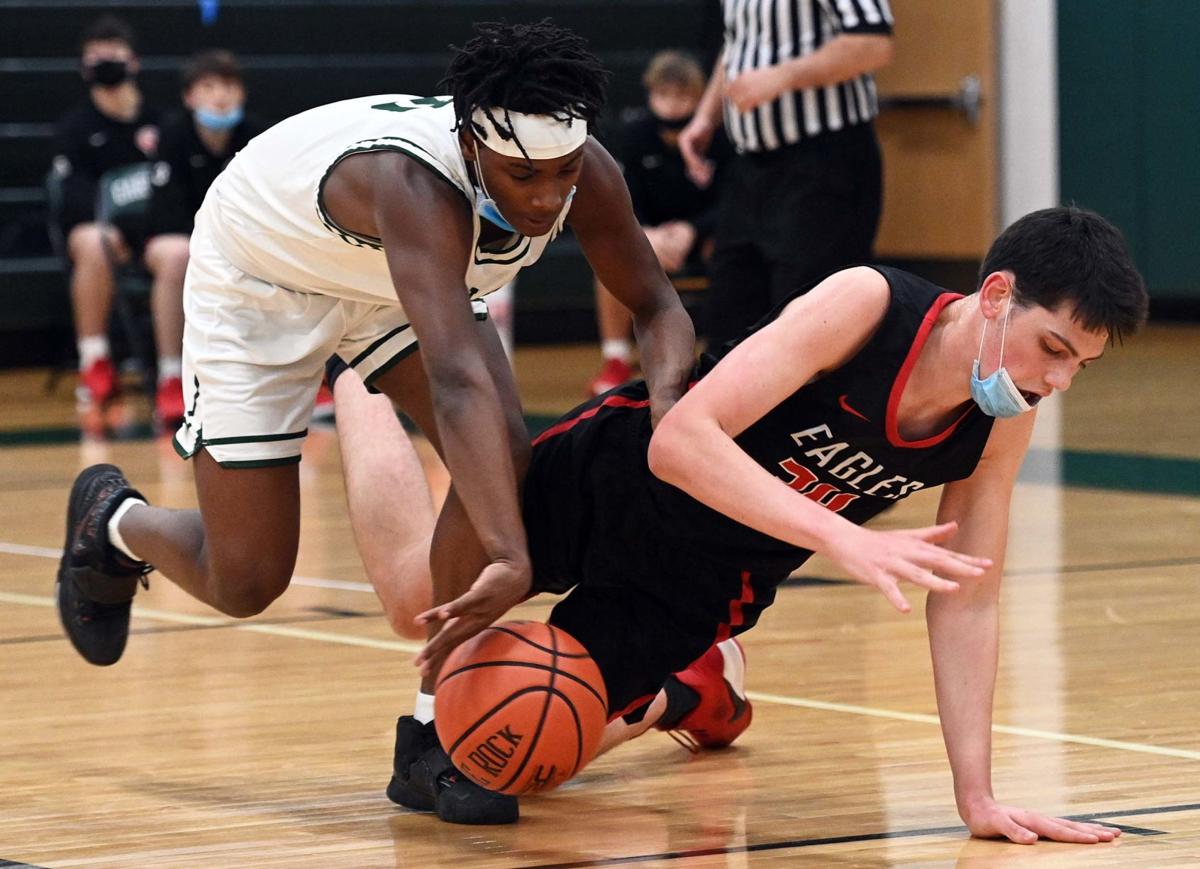 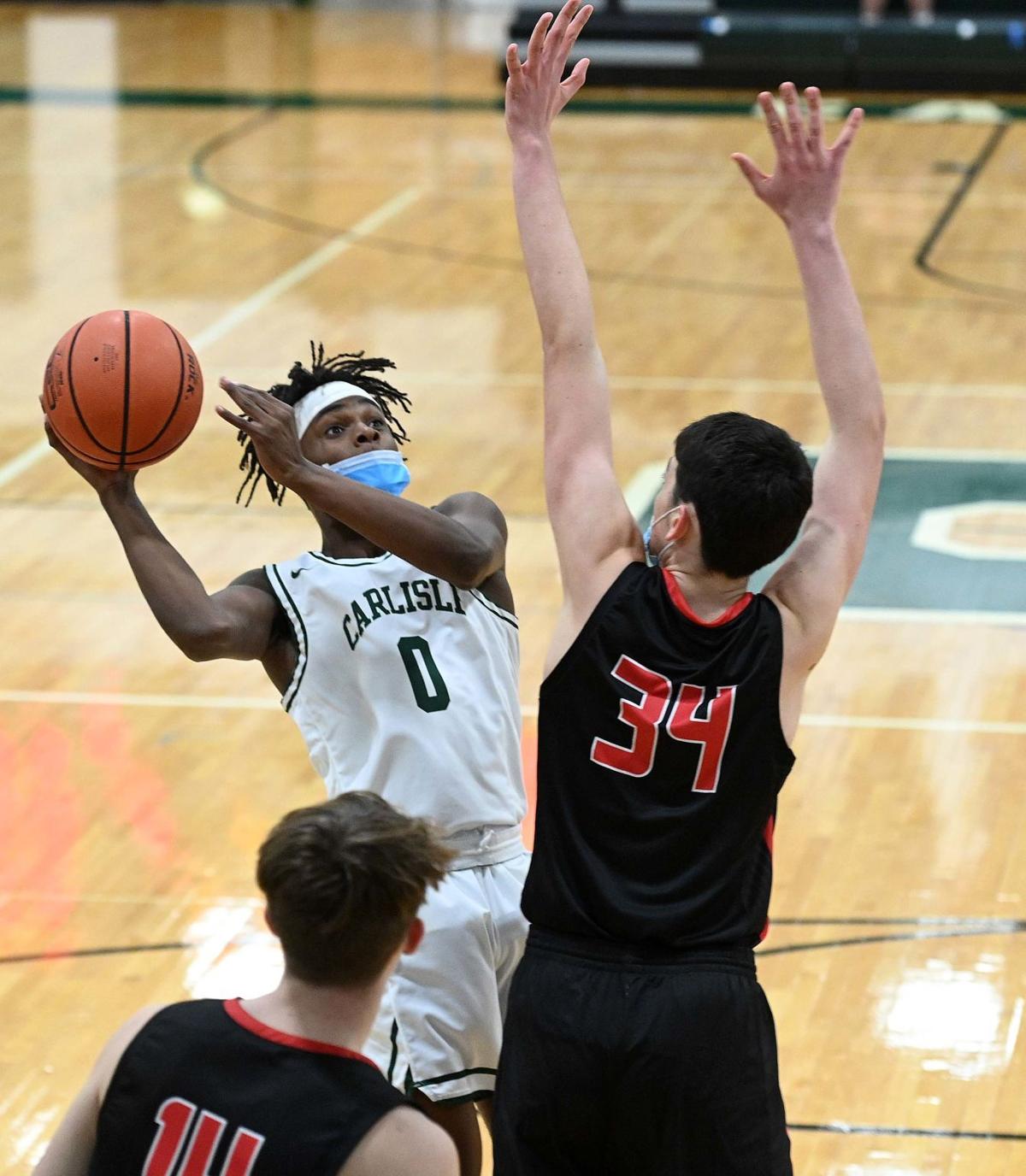 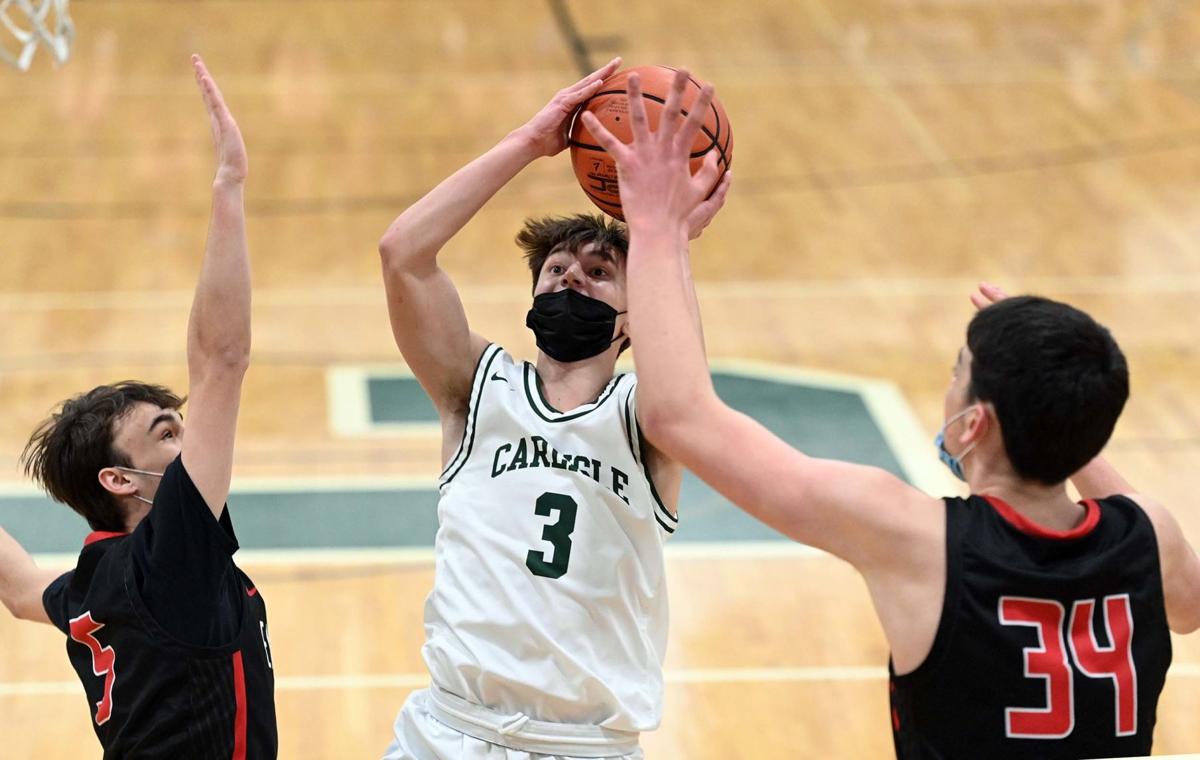 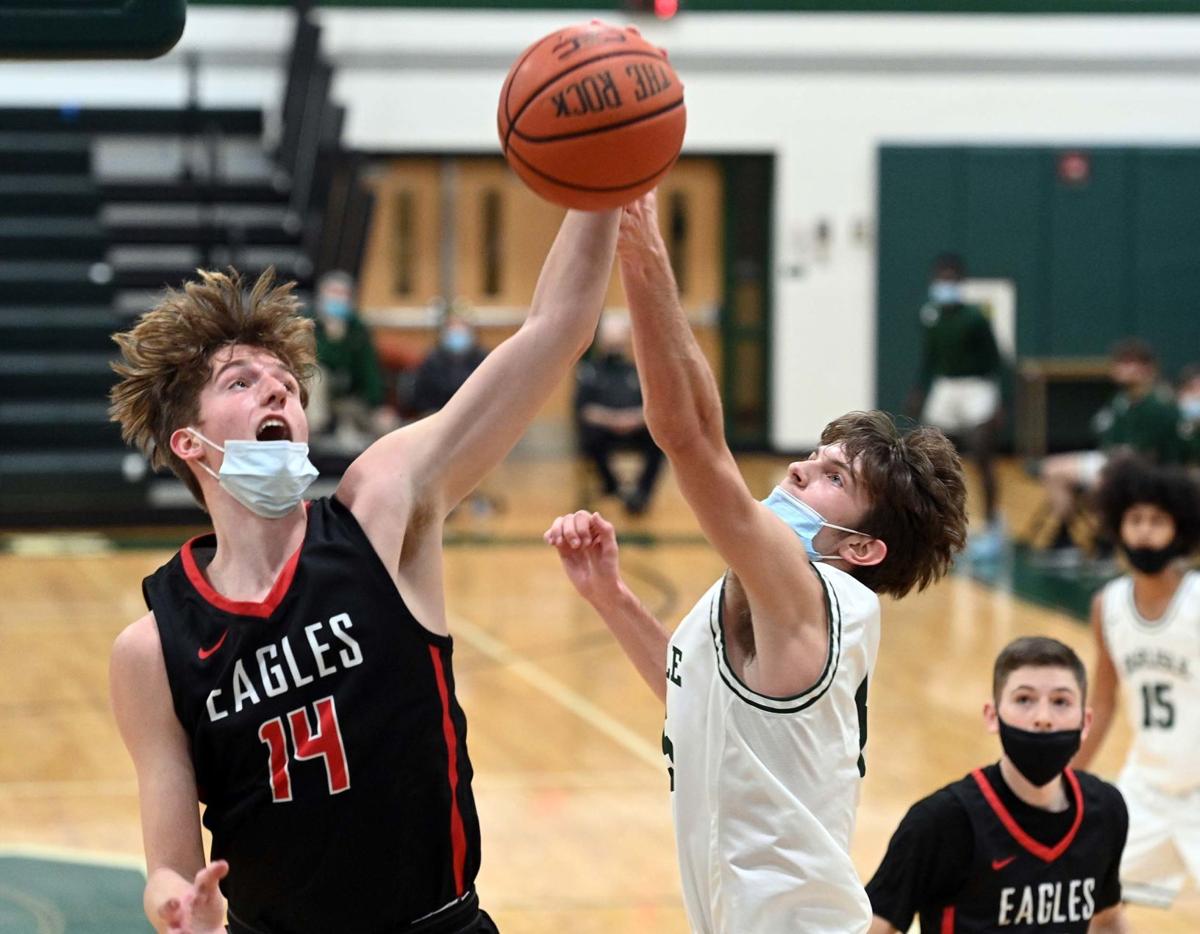 Cumberland Valley’s Nolan Gilbert, left, pulls a rebound down in front of Carlisle’s Cam Lyons during the first quarter in a Mid-Penn Commonwealth game Monday night at Carlisle High School.