'All about goal smashing': If Logan Nutt has it her way, Mechanicsburg girls basketball's record-breaking year is hardly over
Share this
× 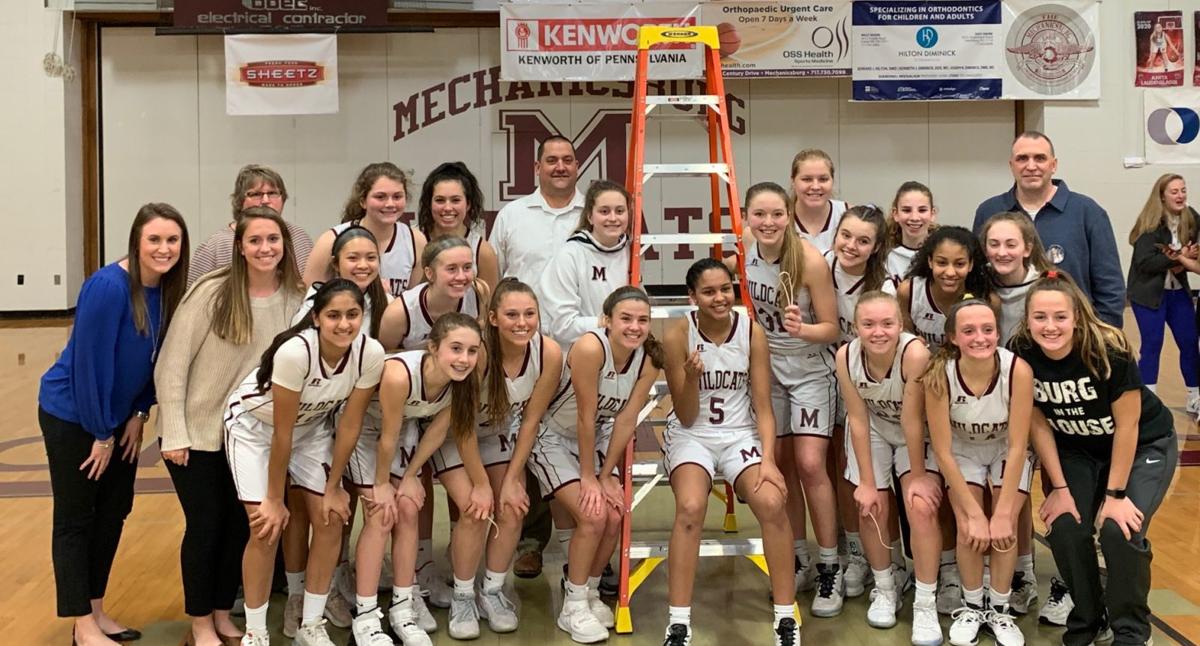 Mechanicsburg celebrated winning the Mid-Penn Keystone on Wednesday night by cutting down the nets after beating Northern in the regular-season finale. 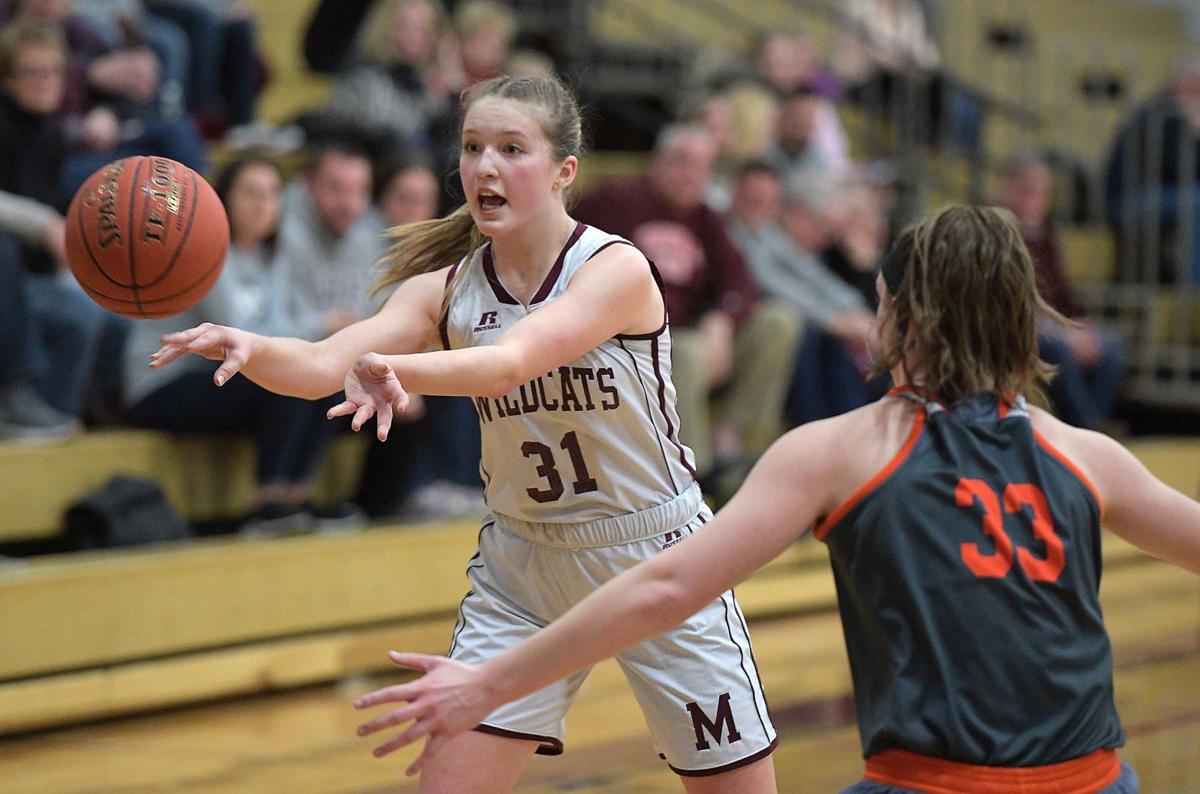 Mechanicsburg’s Logan Nutt, back, knows better than to declare the Wildcats the District 3 Class 5A favorite. But forgive her if she believes it.

Mechanicsburg senior Logan Nutt felt flattered much of the season.

As the wins mounted and the pressure intensified, she took it as a sign of respect that every opponent was driven to hand her team its first loss of the season.

Flattered is not a term a girls basketball player typically uses in that situation. It’s a unique take from a unique girl on a unique team.

“It’s a challenge, but it’s one I know we’re up for,” she said Thursday afternoon, less than 24 hours after the Wildcats wrapped up a program-best 21-1 regular season. “I wanna go out and work for every [win].”

Work, they did. But they made it look easy most nights.

From Jan. 3 on, the Wildcats beat their opponents by an average of 17 points a game, and that included a 44-40 loss Tuesday to division rival Cedar Cliff.

About Tuesday — Nutt offered another unique perspective: the Colts were the most deserving team to hand her Wildcats their first (and only) loss of the season, she felt.

“Everyone’s gotta lose at some point, and going 20-0 is already an accomplishment,” Nutt said.

Sure, the loss still stings, but the Colts earned the win and gave Mechanicsburg one of its toughest challenges this season. Nutt is thankful for that. It ended a run at history — the girls were on pace to become the first Mechanicsburg basketball program to go 22-0 in a regular season — in the penultimate game, but Nutt knows the most important games of the year are about to begin.

The District 3 Class 5A playoffs begin Feb. 18, and the top-ranked Wildcats have to be considered a heavy favorite to claim their first district title.

“We’re all about goal smashing and leaving a legacy,” she said.

Nutt felt in the preseason that this team would be special. Head coach Clay McAllister was a little more hesitant. But there were early signs the senior would be proven right.

“There were some close games early in the year,” McAllister said, specifically pointing to the 43-39 overtime win at Susquehanna Township in the fourth game of the year as the inflection point, “and then it was like, ‘Maybe we’re a little bit better than they thought they’d be.’”

“Winning a game like that, early in the season on the road, especially against them, is really tough,” Nutt said.

When the ‘Cats reached 7-0, Nutt noticed. And as the wins kept coming, the Mansfield University commit wondered, “When is this gonna change, when is this going to end?”

Not for a while, it turned out.

McAllister believes great teams are good at learning from losses. He’s not fretting the one that got away, falling in line with a team that’s not lacking for confidence ahead of districts.

Nary 12 hours after the Cedar Cliff loss, McAllister saw evidence this group will be just fine.

“I see Jenna [Skurcenski], and Talia [Gilliard], and Logan most mornings, and all three of them had a smile on their face and basically it was, ‘We’re ready to go. We’re ready to get back after it,’” McAllister said. “If those three are projecting that attitude in the hallways and classes, it’s tough for the younger ones to not follow suit. I think there’s a level of maturity there with those three.”

The Wildcats came out later that night and stomped Northern 59-26 at home, celebrating their division title after the win by cutting down the nets.

“Oh my gosh, last night was one of the best nights of my life I can honestly say,” Nutt said. “I had always wanted to cut down a net.”

It’s a resiliency McAllister cherishes in this group — a characteristic it shares with last year’s squad that became the first in program history to make the PIAA quarterfinals.

This is a group that lost 3-point bomber Rylee Everett and interior muscle Megan Schrass to graduation last season. Then Allison Schrass — the definition of “glue girl” — tore her ACL during offseason camp at Messiah in the second-to-last game of the summer.

It hasn’t mattered. Gilliard (18.9 points per game) exploded onto the scene against more double-teams than ever, cementing herself as one of the district’s best players, Nutt (8.0) refined her role in the post and as a leader, and Emma Castilla (9.8) emerged as a sophomore into one of the area’s better interior scorers, seemingly out of nowhere.

The concoction came together so well that Mechanicsburg has the best record in the Mid-Penn Conference — it faces Trinity on Tuesday in the Mid-Penn tournament semifinals, a matchup McAllister and Nutt are eager for. The Wildcats are a sizable favorite to win the district 5A championship — it would be the first in program history.

“We’re not gonna be that team that’s gonna be cocky and say ‘We’re gonna win it all,’” she said after a long pause when asked what she thinks the team’s odds are.

But she can’t be blamed if she believes they are.

Two years ago, Mechanicsburg was ravaged by injuries, forced to play inexperienced young players meaningful minutes in a season that was lost before it began. Before the 2018-19 season, McAllister hoped all those bruises and losses would harden his players, but it was unreasonable to think a club that went 8-14 the year before would make a state tournament run.

And yet, they did.

And a year later, they’ve defied the odds again.

It’s not over yet.

Local reps in districts: Cumberland Valley, Cedar Cliff in 6A; Mechanicsburg, Shippensburg, Northern, East Pennsboro in 5A; Trinity in 3A.

District 3 Girls Basketball: Talia Gilliard gets helping hand from seniors as Mechanicsburg blows out East Pennsboro in Class 5A opener

“Hard. I don’t know how else to put it. The look on my face probably says a lot. Hard.” ~ Mechanicsburg senior Logan Nutt

Mechanicsburg celebrated winning the Mid-Penn Keystone on Wednesday night by cutting down the nets after beating Northern in the regular-season finale.

Mechanicsburg’s Logan Nutt, back, knows better than to declare the Wildcats the District 3 Class 5A favorite. But forgive her if she believes it.