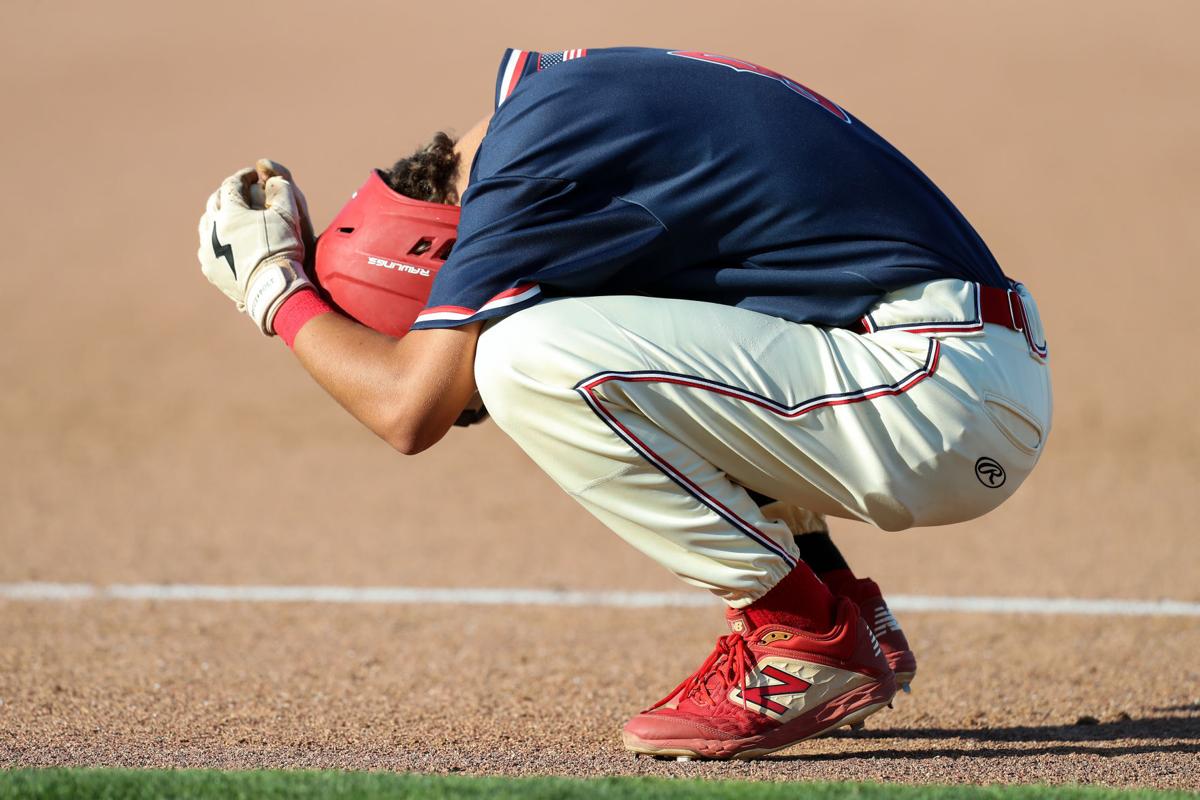 Red Land's Brady Ebbert (9) reacts after the last out following the 4-2 loss to Bethel Park in the PIAA 5A baseball championship game played Thursday evening at Medlar Field at Lubrano Park in University Park. 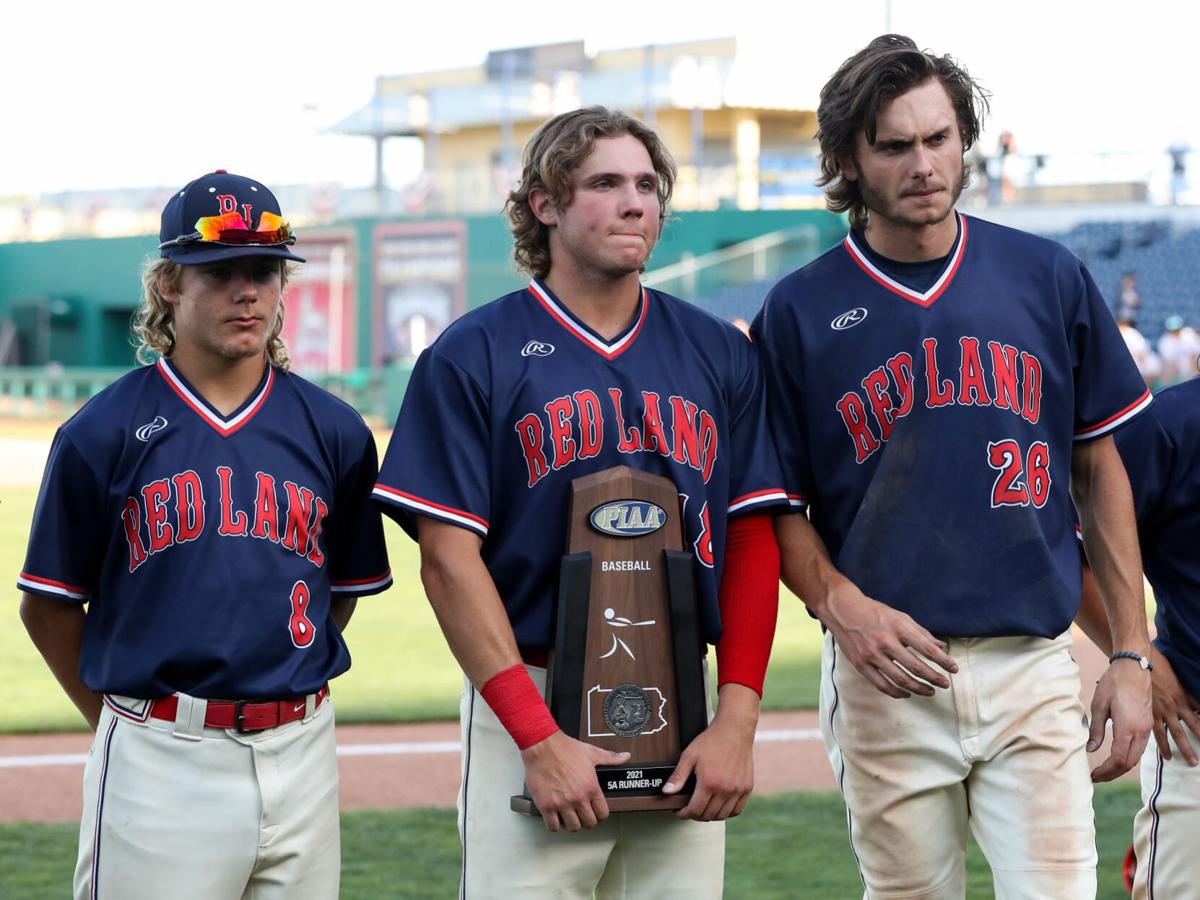 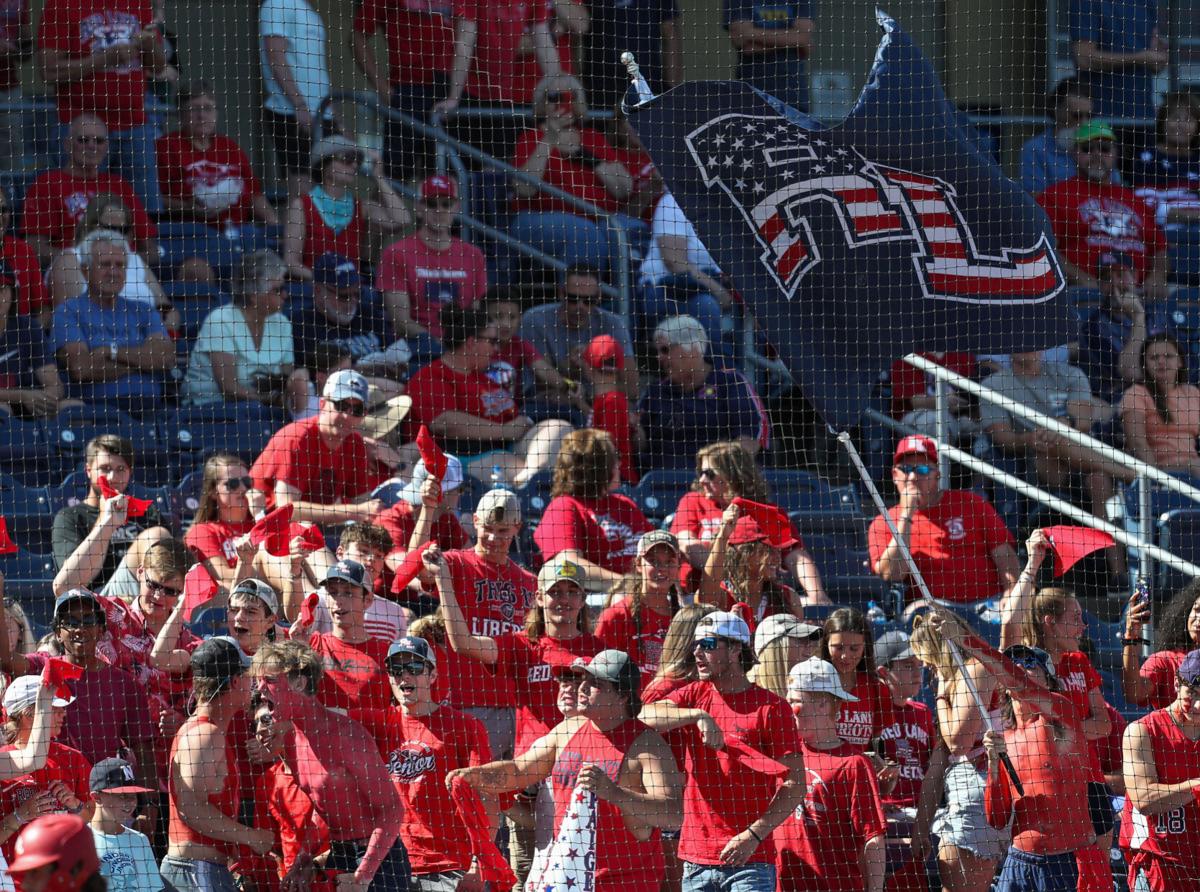 STATE COLLEGE — There aren’t many pitchers that can say they’ve had the Patriots’ number this season.

Sure, some pitchers have quieted the potent Red Land bats, but on most nights the Patriots can post an easy six or seven runs.

That’s where Bethel Park’s Eric Chalus comes in. The future Kent State University southpaw not only held Red Land to a pair of runs in six innings of work, but he did so by walking away unscathed in the fifth and sixth innings of Thursday’s PIAA Class 5A championship when the Patriots were threatening with runners in scoring position.

“Against a team like this, I’m sure they come through 99 times out of 100, or at least get a run,” Bethel Park head coach Pat Zehnder said of the jams his team found themselves in. “We were very fortunate to get away with not letting up a run in those situations.”

“Credit goes out to the pitchers for maybe getting in themselves in that situation. But again, the mental toughness, to be able to bear down, find a way to just keep pounding that zone, just hoping that things turn out their way. … And they did.”

Cole Wagner made things interesting in the fifth frame, plating Benny Montgomery on an RBI double in the right-center field gap, which trimmed the Bethel Park lead to two. Ethan Phillips upped Wagner to third on a single before Kaden Peifer stung a line drive back at Chalus, which the Division I pledge absorbed and turned the 1-6-3 double play.

An inning later, Chalus issued a free pass to leadoff batter Brady Ebbert and Braden Kolmansberger hopped a double over the head of third baseman Cody Geddes. Keeping his composure, Chalus served up an unassisted ground out to Drew Hildebrand and promptly whiffed Evan Keefer and Cooper Artley to end the frame.

“It was good to see him a couple more times,” Montgomery said of Red Land’s late success off Chalus. “In each at-bat I just kind of got to know what he was doing, throwing his fastball a lot, giving me curveballs, too, so I kind of knew what to expect. He pitched me very well today and I’m very impressed by him, and I wish him nothing but the best.”

The seventh inning then belonged to Cody Geddes on the mound. Red Land once again applied the pressure as Montgomery reached first on a hit-by-pitch and Wagner roped his second two-bagger of the day down the right field line to open the stanza. Geddes let the dust settle before rolling a Phillips ground out, fanning Peifer and clinching the game-winning out on an Ebbert dribbler to second baseman Bo Conrad.

“He made pitches whenever he needed them,” Peifer said of Chalus. “And we didn’t execute the way we could have and they made plays. They’re a good team. I would love to play them again.”

The Black Hawks drew first blood in the contest, plating three runs in the first inning off Peifer. An error by Wagner at first opened the floodgates which cued a Geddes two-RBI triple. Zachary Sackett tacked on another run on an RBI ground out.

Come the second inning, Jason Nuttridge and Ben Hudson notched singles, ensuing Kessler to plate Nuttridge three at-bats later on an RBI groundout. Phillips tallied the first run for Red Land in the third inning, scorching a single back up the box and scoring Wagner. Phillips finished his evening with a 3-for-4 line.

Following his first inning woes, Peifer returned to his ace mentality, setting down 15 straight. Peifer worked six innings, scattered five knocks on four runs (two earned) and struck out one. He did not warrant a base-on-balls.

“I knew there was a lot of game left,” Peifer said of finding his composure on the bump. “I wanted to make up for the first two innings, well, the first inning. And I wanted to give my team the best chance to win, and I started working on pitches and it worked out. But we came up short.”

Red Land concludes its season at 25-5, garnering 5A runner-up honors. For players like Montgomery, Wagner and Phillips, Thursday served as the last go-around in a Patriots’ uniform.

“It’s been one heck of a ride,” Montgomery said. “These are my buddies and I’ll keep in touch with them forever. I couldn’t have asked for a better four years with them. Of course, it’s not the way that we wanted to end, but it’s the journey, not the destination, we’ve had as a group.”

Benny Montgomery becomes the first player in Red Land program history to be named the Gatorade Pennsylvania Player of the Year.

Red Land's Brady Ebbert (9) reacts after the last out following the 4-2 loss to Bethel Park in the PIAA 5A baseball championship game played Thursday evening at Medlar Field at Lubrano Park in University Park.