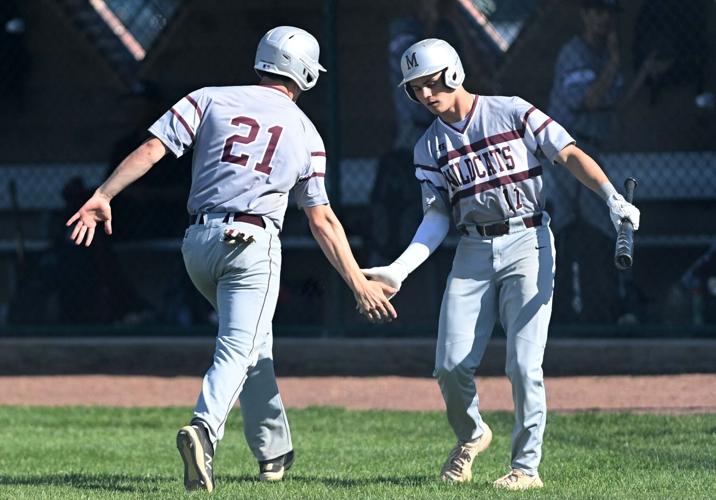 Mechanicsburg's Max Cavada, left, is congratulated for scoring a run by teammate Jeff Lougee during the second inning in a Mid-Penn Keystone game against Carlisle Wednesday afternoon at George Bowen Field. 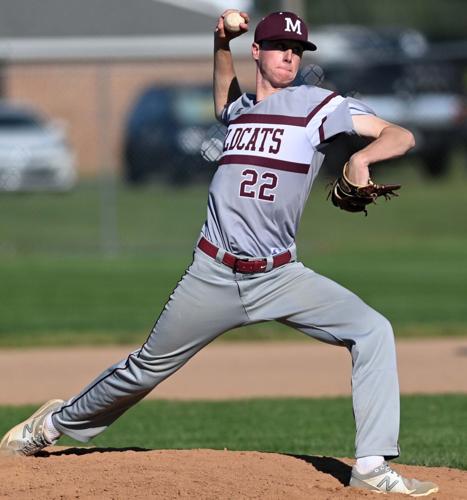 Mechanicsburg's Will Hummel fires a strike during the third inning in a Mid-Penn Keystone game against Carlisle Wednesday afternoon at George Bowen Field. 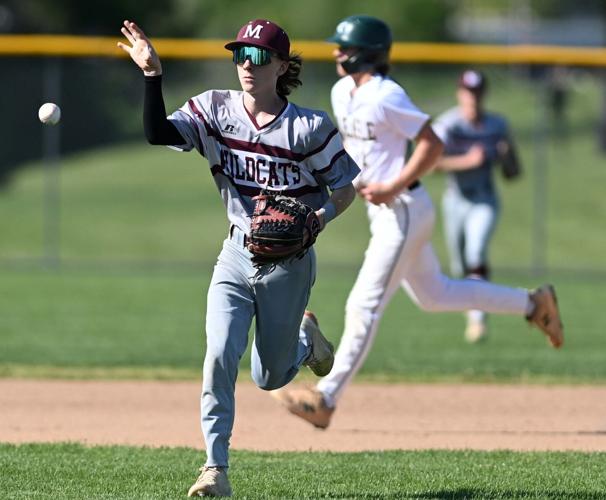 Mechanicsburg's Zach Lochary, front, flips the ball to the mound after closing out the first inning with the out against Carlisle's Thomas Davenport at second base in a Mid-Penn Keystone game Wednesday afternoon at George Bowen Field.

During the second inning of Wednesday’s game at Carlisle's George Bowen Field, Mechanicsburg starting pitcher Will Hummel began to brew some internal momentum inside the Wildcat dugout.

The visiting Wildcats showcased patience at the plate throughout the Mid-Penn Keystone Division matchup, working nine walks and capitalizing on a raft of Carlisle errors. Behind that one-two punch, the visiting Wildcats mapped out a 7-0 victory over Carlisle to split the regular-season series with the Herd.

“They made a couple of mistakes, and I thought we took advantage of it,” Mechanicsburg head coach Clay McAllister said. “I thought we got that big inning and Will came right back out and got after the strike zone, and I think that was important for us. It sort of shut down any momentum that they might come up with.”

The big inning came in the top half of the second, where the division champion Wildcats (15-3, 13-1 Keystone) scored all seven of their runs. An errant throw to first kick-started the inning and followed by an RBI walk from Jordan Steffan.

Zach Lochary kept the runs flowing on a sacrifice fly to right field, extending the ‘Cats’ lead to 3-0. Dylan Hellam then forced in another run on a walk two at-bats later, while Shawn Karpaitis tacked on the fifth run with another sacrifice fly. A walk and another error on a pop fly to shortstop capped the scoring assault.

Hummel's internal focus grew as each run crossed home in the inning.

“It’s huge,” Hummel said of the run support. “On the mound, it’s all a mental game and having seven runs on the board, knowing that makes all the difference. It gives you so much confidence out there to just throw how you throw.”

In his six innings of work, the Wildcat junior gassed Carlisle batters with a low-to-mid-80s fastball and mixed in a healthy diet of offspeed pitches to keep the Herd off-balance. Carlisle mustered just one hit off the hard-throwing right-hander as Hummel took a no-hit bid into the bottom of the fifth inning.

HS Baseball: Cumberland Valley battles it out for 9-4 win over Mechanicsburg

Jacob Workman — who spun a solid 3⅓ innings of relief for Carlisle after starter Thomas Davenport was pulled through 1⅔ innings — broke up the no-hitter with a leadoff single in the fifth. Hummel finished with seven strikeouts and issued three walks, boosting his win total to four and dropping his earned-run average to 0.92.

“I feel like he’s getting better and better,” McAllister said of Hummel. “He had some good velocity today, and I thought he had pretty good stuff.”

Mechanicsburg and Hummel entered Wednesday’s start with some added fire, with Carlisle winning the first matchup between the two teams 7-1 on April 21.

“It’s been a game we’ve been looking forward to all season since the other game,” Hummel said. “We’ve been talking about it a lot, what our game plan was, how we were gonna come back. And we executed well.”

For Carlisle (11-6, 10-4 Keystone), Davenport, who contained the Wildcats in the first meeting, was tagged for just two hits but allowed seven runs (three earned) with five walks. Workman pitched 3⅓ shutout innings after spelling Davenport and sprayed a pair of hits while punching out two. Freshman Spencer Griffie dealt the final two frames with two hits allowed and fanned four.

The Herd continues to fight for its second straight District 3 Class 6A postseason berth. After Wednesday's loss, Carlisle dropped from the 10th seed to the 11th seed in a Class 6A bracket that sends 12 teams to the playoffs.

“I always have confidence in these guys to bounce back,” Carlisle head coach Scott Stoy said.

The ‘Cats, already having the Keystone Division crown under their belt, angle for more momentum as they approach the postseason. Mechanicsburg faces fellow D3 5A foes Northern Friday and Waynesboro Monday before tackling the Mid-Penn Conference semifinals at Milton Hershey Tuesday.

“It was a good day for us,” McAllister said. “I’m just proud of the fact that they show up every day and play hard. Even in the games we lost, they competed, and they were against some pretty good clubs. So, that’s a good sign for us.”

Local Sports: Cumberland County schedule and scores for May 11

Keep up with the latest scores from the sports scene in Cumberland County.

Notes from the local baseball scene Thursday, including Northern's share of the Colonial Division title, Camp Hill closing in on the Capital and craziness in the Commonwealth.

An eight-run fourth-inning separated Mechanicsburg from Camp Hill, and the Wildcats rode out a 14-6 victory over the Lions for the Mid-Penn title.

US Soccer reaches equal pay agreement for men and women

US Soccer reaches equal pay agreement for men and women

Mechanicsburg's Max Cavada, left, is congratulated for scoring a run by teammate Jeff Lougee during the second inning in a Mid-Penn Keystone game against Carlisle Wednesday afternoon at George Bowen Field.

Mechanicsburg's Will Hummel fires a strike during the third inning in a Mid-Penn Keystone game against Carlisle Wednesday afternoon at George Bowen Field.

Mechanicsburg's Zach Lochary, front, flips the ball to the mound after closing out the first inning with the out against Carlisle's Thomas Davenport at second base in a Mid-Penn Keystone game Wednesday afternoon at George Bowen Field.