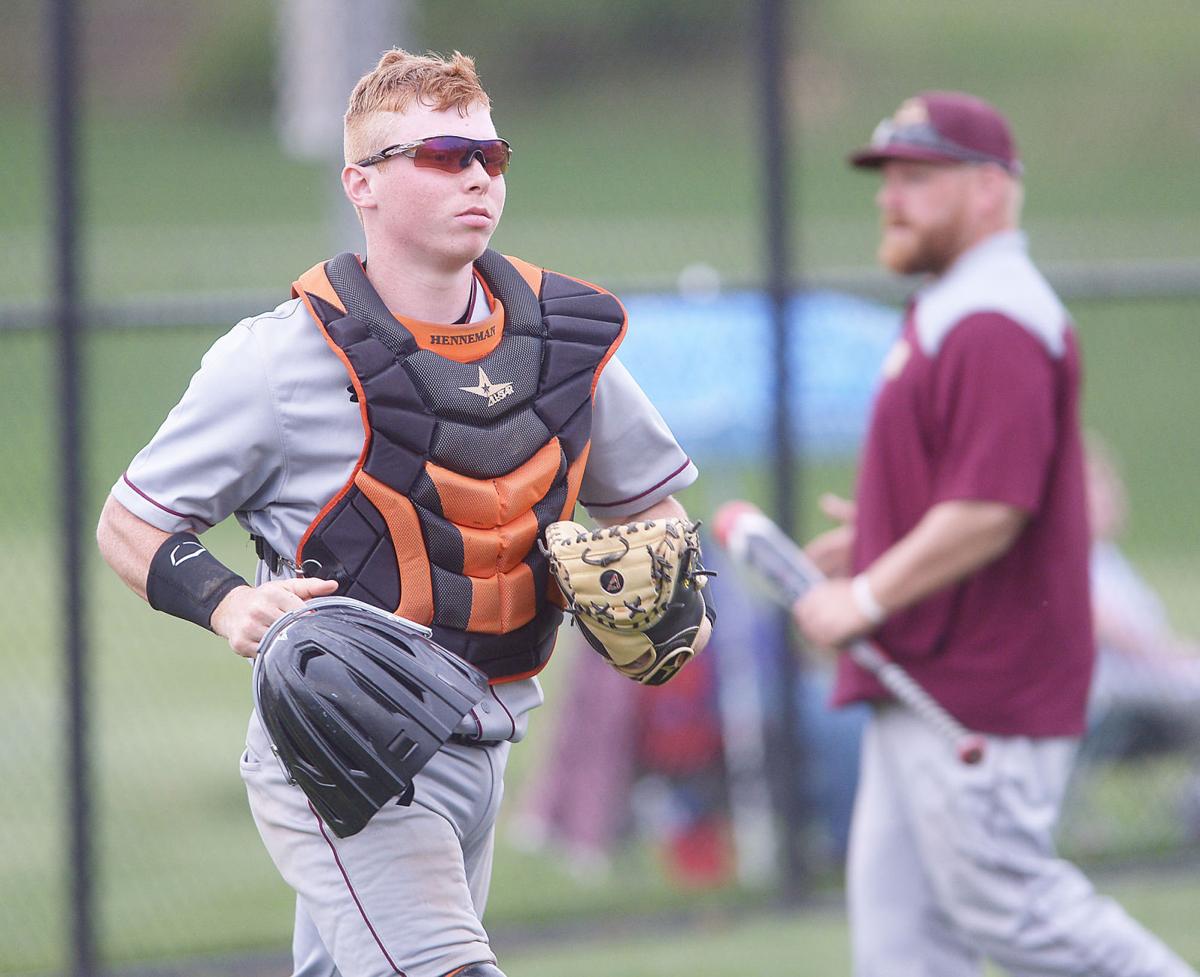 Big Spring sophomore catcher Kollin Henneman is considered the “prototype” by his coach, Josh Petty. The result: NCAA Division I interest and the Bulldogs hunting for their first District 3 playoff berth since 2012. 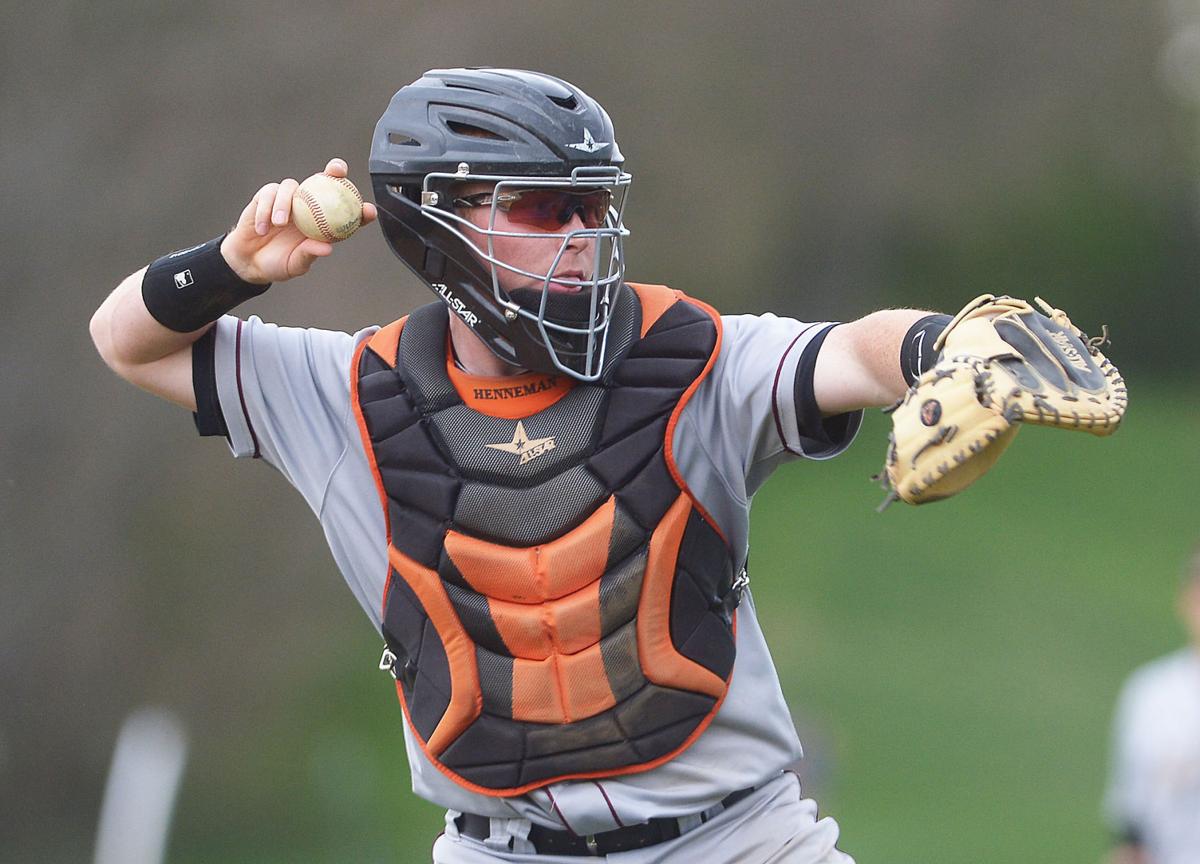 Big Spring sophomore catcher Kollin Henneman has started every game for the Bulldogs since 2016.

The Big Spring catcher obsesses over whatever data he can get his hands on and takes the information he finds to second-year head coach Josh Petty, giving him a voice in the game plan for the next opponent.

It’s the mental game that intrigues the sophomore, who, like Red Land’s Jared Payne, is a dynamic young backstop that Big Spring can build around.

“You gotta be baseball smart,” Henneman said after Thursday’s 4-2 win over Boiling Springs. “I call the whole game, and I love that part because I study all the players we’re facing.”

Admittedly, Henneman is better suited for digging up a short-hopped pitch than hard choppers to third base. There’s no place he’d rather be on the diamond.

“All the work it requires, it’s so rewarding, and it’s something that I love to do,” Henneman said. “To be honest, I probably couldn’t play another position on the field.”

“It’s exciting, because he’s only a sophomore,” said Petty, who coached Henneman at youth levels before taking over the varsity program just before the 2016 season. “I would like our younger catchers to model themselves after him because of his approach to the game, the mental way he attacks to the game and all the work that he puts into his game outside of what we do.”

It’s not just the mental prep for facing a batter that Henneman is mastering. He’s got a good arm and situational awareness. He’s started every game since 2016 for Big Spring and calls every pitch, allowing the coaching staff to focus elsewhere.

He’s got a good grip on the entire pitching staff, including Seth Keiter, who spun a one-hit, six-strikeout gem against the Bubblers Thursday thanks in part to the game Henneman called. The sophomore kept Keiter pounding the outside corner and blending his fastball with a plus curveball and forkball.

And that doesn’t even get to Henneman’s bat, which has been among the best in the Mid-Penn through the first half of the season. The right-hander leads Big Spring with a .409 average, along with a triple and double. He hasn’t been responsible for a ton of runs (3 runs, 2 RBIs) but has been a pain at the plate nonetheless.

“Henneman’s the prototype,” Petty said when asked what his ideal high school catcher is.

“He teaches me things, daily, about the position. … He does his best to educate himself.”

Devoutly religious, Henneman, who has an older sister at Shenandoah University (Virginia) also spends time hunting in the fall. He doesn’t play any other sport, so hunting is a chance to rest his body after baseball.

Henneman, who wouldn’t disclose his recruiting but is listed as having interest from Liberty University Perfect Game’s website, took up catching almost by happenstance.

He went to a camp around the age of 5 (he took up tee-ball at 4 years old), at the Lancaster Barnstormers’ Clipper Magazine Stadium. There he was awarded the “Animal of the Camp” award, receiving a signed bat from Barnstormers’ catcher Lance Burkhart, who is now the manager of the San Diego Padres’ High-A team, the Lake Elsinore Storm.

That moment sparked a devotion that hasn’t abated. Henneman’s dad bought him books from Jay Weaver, co-founder of The Catching Camp. Henneman pored over them and practiced in his yard, attending Weaver’s camps when possible in New Hampshire and Virginia.

He now plays for Keystone State Baseball Academy, on the Keystone State Bombers 17U team, traveling up and down the East Coast to showcases and tournaments during the summer. He also gets instruction from Shaun Vernesoni out of the academy.

Throughout it all he continued to hone his skills — he’s been particularly focused this year on getting quicker on popping out of his stance to throw to second on stolen base attempts — taking over the Bulldogs’ starting spot right away as a freshman. He’s got the complete confidence of the pitching rotation as well, because, as Petty said, they trust Henneman.

Many of those kids have played with Henneman since he was 6 or 7 years old, he said.

“You just gotta keep a relationship with them; they’re like your brothers,” he said.

Big Spring pitchers have been collectively some of the best in the area this season, sporting a 2.64 ERA and 1.28 WHIP. Over 69 innings, they have 62 strikeouts.

“We don’t even view him as a sophomore, obviously.” Petty said. “I’m not saying he’s perfect … but for the most part, our pitchers want him back there.”

And that won’t change anytime soon.

Kollin Henneman is only 18 years old, and his baseball playing career is over.

Big Spring sophomore catcher Kollin Henneman is considered the “prototype” by his coach, Josh Petty. The result: NCAA Division I interest and the Bulldogs hunting for their first District 3 playoff berth since 2012.

Big Spring sophomore catcher Kollin Henneman has started every game for the Bulldogs since 2016.