TOKYO (AP) — Shohei Ohtani is doing things no other player has ever done, a point of pride for Japanese like Fumihiro Fujisawa.

“In the last five years his body has become bigger and stronger. We see that he’s become an American — not a Japanese,” Fujisawa said.

There have been physical changes, added maturity and cultural adaptations. But make no mistake, Ohtani is “Made In Japan” — 100% — with roots deep in the Japanese countryside.

American Robert Whiting, who has written bestsellers about baseball in Japan, views Ohtani as the result of 150 years of baseball evolution. An American professor in Tokyo in 1872 introduced the game, which is known in Japanese as “yakyu," or “field ball.”

Ohtani follows two other milestone players — pitcher Hideo Nomo, who joined the Dodgers in 1995, and Ichiro Suzuki, who has more than 3,000 hits and is likely headed to Cooperstown when he becomes eligible in 2025.

But there were always qualifiers with those two, and with others. When Nomo excelled, some dismissed him as only a pitcher. Japanese could pitch — they were technically proficient — but couldn't make it as position players. Then Ichiro came along. Well, he could hit but not for power.

Now comes Ohtani. He pitches, he has power and he's one player, not two. No asterisks or footnotes needed.

“Ohtani can defeat Americans on their own terms, or the Latin Americans for that matter,” Whiting told the AP. “I mean, he’s bigger than most of them. He’s stronger than most of them, plus he’s pitching every five days and he’s hitting at the top of the order every day. You can make the argument that Ohtani is the best baseball player in the history of the game just because of what he did last year and this year. You could argue that he deserves to be MVP every year as a top-10 hitter and top-10 pitcher.”

No argument from Astros manager and AL All-Star manager Dusty Baker, for whom Ohtani will lead off as the designated hitter in Tuesday night's All-Star Game.

“He's not just an All-Star, he's a megastar," Baker said.

Whiting is the author of the bestselling book “You Gotta Have Wa,” which looks at Japanese culture through the prism of sports. Another book, "The Samurai Way of Baseball,” follows the career of Ichiro, who was Japan’s most famous player until he retired in 2019. It was also titled “The Meaning of Ichiro.”

As a teenager, Ohtani constructed an 81-box development chart detailing his goals. The step-by-step process is well known in Japan, and so is Ohtani’s own chart. He lists baseball areas for improvement, but also the mental and personal side.

He specifies, among other things, that to improve he needs to read books, clean the room, improve the slider, get the fastball up in the 100 mph range — and be trustworthy.

“Ohtani was raised in this Japanese, martial arts-inspired training system where you join a baseball team and you play year-round. It’s not a seasonal thing like the States," said Whiting, who has lived on and off for 60 years in Japan.

“Ichiro in his first year in high school was probably the best player on the team, but he couldn’t play. He had to do the laundry and cook the meals. He’d get up in the middle of night and practice his swing. The same thing with Ohtani. He was cleaning toilets in high school during his first year.”

This is not that unusual. Public schools in Japan have limited cleaning staffs, so students do it to learn discipline and humility.

Ichiro had an edge, often defying the conventions of Japanese culture. The Japanese phrase “deru kugi wa utareru’” captures him: “The nail that sticks up gets hammered down.”

Ohtani appears to be the opposite — polite, soft-spoken and discreet, a player whose only focus seems to be baseball. There are few reports about any social life.

“The guy is totally committed,” Whiting said. “It’s not too much to call him a modern-day warrior monk.”

“In high school there are countless, endless practices and development of spirit and teamwork and self-sacrifice,” Whiting added. “That’s the essence of the martial arts. It’s the essence of Japanese life. You see it in the corporations, in the school systems. He grew up in a culture where there was a lot of discipline."

A game in 1896 in Yokohama between Japanese and Americans stands out in local history. Japan won 29-4, and many of the players were from Samurai families. The result was front-page news in Japan.

Whiting quotes Japanese historian Kyushi Yamato: "Foreigners could not hope to understand the emotional impact of this victory, but it helped Japan, struggling toward modernization, after centuries of isolation, overcome a tremendous inferiority complex it felt toward the more industrially advanced West.”

Ema Ryan Yamazaki, in collaboration with Japan's NHK television, directed a 90-minute film several years ago about Japan's annual high school baseball championship, which is known as Koshien. The film is titled “Koshien: Japan's Field of Dreams.” ESPN aired it in 2020, and Yamazaki included a brief interview with Ohtani.

“Koshien is like our World Series,” Ohtani said. “Except that it's a single-elimination, so one loss and it's over.”

The film features long interviews with Hiroshi Sasaki, Ohtani's high school coach who gets some credit for nurturing Ohtani, as does Hideki Kuriyama, who coached him at the Japanese professional team Hokkaido Nippon Ham Fighters.

His parents were both athletes in their own right: Toru, a semi-pro baseball player, and Kayoko, accomplished at badminton.

Sasaki is fond of Bonsai, the Japanese practice of growing miniature trees in pots. In the film, Sasaki talks about the difficulty of raising Bonsai, the need to remove wires that guide the branches and the duty to eventually put the plants in larger pots. He seems to be talking about Ohtani.

“I didn't create Ohtani, he was incredible from the beginning,” Sasaki said in the film. “But I do think about how many pitchers I may have killed before him by my poor coaching. There are so many plants I killed by forcing them into my own small pots. So it's scary for me to speak of having raised Ohtani.”

Yamazaki said it was her understanding pitchers at Ohtani's high school were singled out for the “grunt work” of cleaning toilets since they received the most attention on the field.

“He (Ohtani) has dedicated himself to being the best baseball player he can be, every moment of his life," she said. "He eats whatever, not necessarily because it's tasty, but because it's good for his body. He spends the offseason struggling around his training schedule rather than hanging out like a lot of baseball players do.”

When the Angels signed Ohtani, they promised to let him follow his own agenda for physical conditioning and recovery work. They deferred to his expertise and kept their word, although much of the front-office staff has been fired since Ohtani signed.

“There's nobody I trust more, who knows his body,” said manager Phil Nevin, Ohtani's fourth manager since joining the Angels.

Japan-born Yamazaki, who divides her time between Japan and New York, found out what most reporters know after interviewing Ohtani: His answers tend to be basic without much elaboration.

“It’s not like he’s a man of many words or is full of illuminating quotes,” she said. “I know some journalists wish he would be more colorful. Even when I was asking him about those nostalgic years of high school, it didn’t seem to be emotional for him in any way. He is charismatic in person, but he shows what he can do on the field rather than with his words.”

Like Fujisawa, the American baseball researcher, Yamazaki was struck by Ohtani's “Americanness," or at least his ability to adapt. Not all Japanese players have been able to, surrounding themselves with a Japanese entourage and other artifacts from home.

“He is monk-like in his craft, but I wonder if that adaption to American culture is also a part of what’s gone so well for him," she said. "He’s very emotional on the field. He doesn’t hesitate to be happy when he gets a strikeout or when he’s hanging out with teammates or interacting with fans in an American way. He’s not stone-faced and never cracking a smile, which is pretty much how Ichiro was.”

Every first round pick in the 2022 MLB Draft

Competitive Balance Round A

Aaron Judge tied Roger Maris’ American League record of 61 home runs in a season with a tiebreaking, two-run drive in the seventh inning that lifted the New York Yankees over the Toronto Blue Jays 8-3. The 30-year-old slugger drove a 94.5 mph belt-high sinker with a full-count from left-hander Tim Mayza over the left-field fence at Rogers Centre. The 117.4 mph drive took just 3.8 seconds to land 394 feet from the plate, and it put the Yankees ahead 5-3. Judge watched the ball clank off the stands, just below two fans who reached over a railing.

The young Cleveland Guardians finished what they started. Rookie Steven Kwan hit a grand slam and drove in a career-high five runs as the Guardians beat the Texas Rangers 10-4 to clinch the AL Central. Baseball's youngest team, the Guardians have won seven straight and gone 18-3 since being tied for first on Sept. 4. It's Cleveland's first division title since 2018 and it came in the team's first season after changing its name from Indians to Guardians. Manager Terry Francona was in the middle of a chaotic celebration in the clubhouse. It was a personal triumph for the 63-year-old who battled serious health problems the past two years. 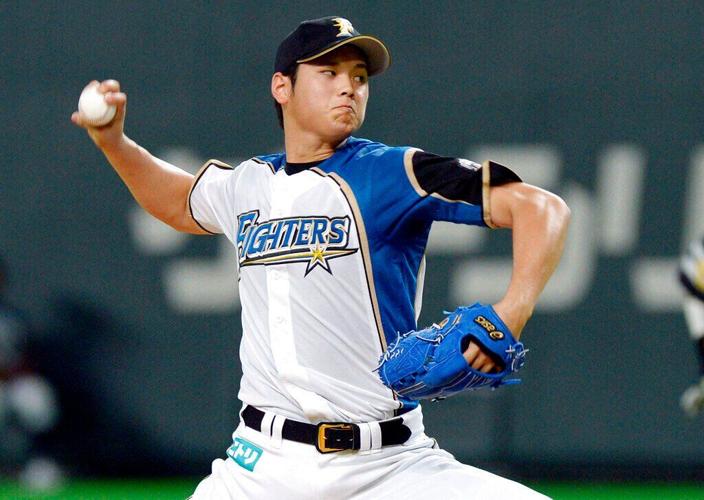 FILE - Shohei Otani of the Nippon Ham Fighters pitches against the Fukuoka Softbank Hawks in Sapporo, northern Japan on Aug. 3, 2014. Ohtani of the Los Angeles Angels is arguably the greatest baseball player in the history of the game. His roots are deep in northeastern Japan where he played high school baseball and got his start. (Kyodo News via AP, File) 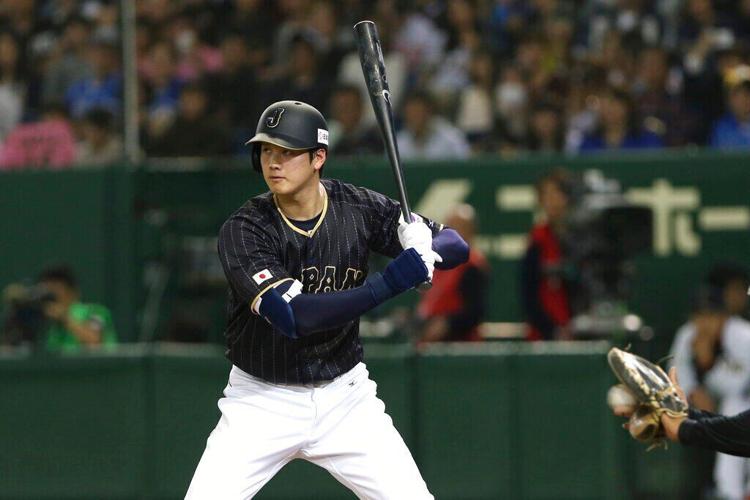 FILE - Japan's Shohei Otani is walked intentionally by the Netherlands' catcher Dashenko Ricardo in the seventh inning of their international exhibition series baseball game at Tokyo Dome in Tokyo on Nov. 13, 2016. Ohtani of the Los Angeles Angels is arguably the greatest baseball player in the history of the game. His roots are deep in northeastern Japan where he played high school baseball and got his start. (AP Photo/Toru Takahashi, File)