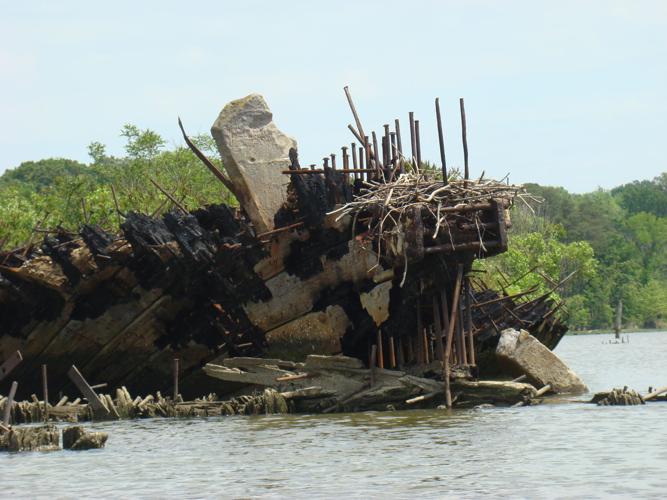 Mallows Bay in the Potomac River is littered with wreckage of warships built during World War I. 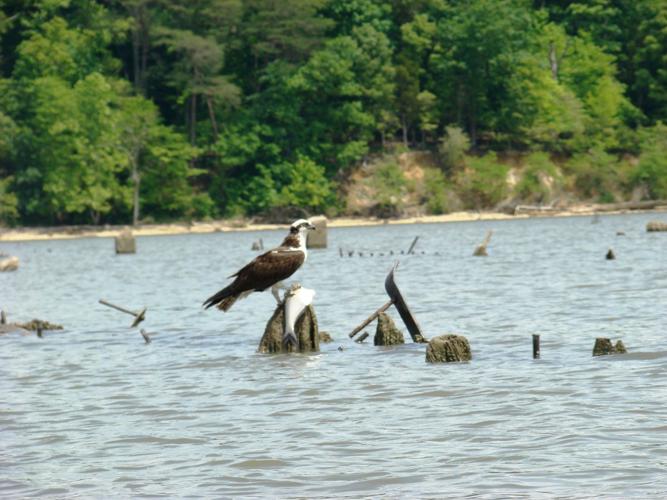 A variety of wildlife inhabit Mallows Bay, sometimes building nests on the wreckage of warships. 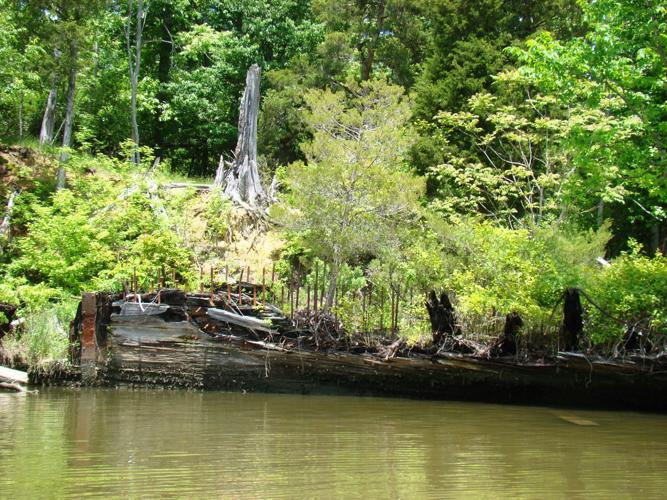 Wreckage of WWI-era warships can be found in Mallows Bay on the Potomac River.

I never knew kayaking could be so much fun until I tried it. Now I’m hooked and am looking forward to my next excursion, thanks to my enjoyable experience learning about an important era in history while paddling through Mallows Bay on the Potomac River.

The 14-square mile area, located in Charles County, Maryland, is well within sight of Quantico Marine Base and located in Nanjemoy.

My friends warned me that I’d get wet and cautioned against taking along a camera. For once, I wished I hadn’t listened. But for a small splash from the paddles, I emerged dry thanks to the soft launch located onsite. My seasoned kayak buddy knew better and carted his camera along to capture a few moments of the memorable trip.

From April through October, Atlantic Kayak guides join other kayakers to lead the way and share the story of “The Ghost Fleet of Mallows Bay.” Guests glide among the decaying detritus of wooden steamships and learn that the structures were once part of a national effort dating back to World War I when Woodrow Wilson approved one of the largest and most expensive shipbuilding programs in history. Because time was of the essence, the hastily and shoddily constructed ships were rendered almost obsolete from the onset, yet work continued well after the war ended to fulfill already agreed-upon contracts.

Years later, the government sold what was left of an outmoded fleet to Western Marine and Salvage Company of Alexandria, Virginia, for a grand total of $750,000 — the cost of one boat. The company proceeded to extract the valuable metal and burn the hulls to the waterline to assist in the process.

Before work was complete, the company claimed bankruptcy, and today visitors can safely kayak through the rotting remains.

Reed Hellman, who first visited the bay in the 1970s as part of his job as field technician for the then-named Maryland Department of Chesapeake Bay Affairs, said that time has taken its toll.

“When I first visited, many of the hulls were still intact and above the waterline.” Hellman recently returned to the site. “It was much easier to get into the heart of the fleet this time.

“Experiencing it from the vantage of a tiny kayak opens wide a window into the history of one of our nation’s first attempts to function as a global power,” Hellman added about the trip. “We undertook building the ships that now molder in Mallows Bay as an effort to answer our allies desperate call for help in wartime. That the effort failed was a result of circumstances, not our country’s will to succeed. For me, Mallows Bay stands as a monument to our nation’s evolving role in the world.”

Don Shomette, author of “The Ghost Fleet of Mallows Bay,” has been hard at work to ensure that the site gets the recognition it deserves. The marine historian has been taking steps to help it achieve designation as a National Marine Sanctuary.

According to Shomette, the National Marine Sanctuary Program had been discontinued, with only 14 or 15 sites remaining. “With my colleagues, I was able to assemble a team to reach out to public and private institutions, individuals, historians, colleges and museums to complete a proposal. The major step was to get organized, then engage the public.”

Shomette said another step included generating hundreds of pages of documentation to prove that the site deserved a listing on the National Register as an historic and archaeological district.

Today, Shomette is confident that the site will soon gain the sought-after recognition. He describes the reaction of Dr. Jim Delgado, director of the National Oceanic and Atmospheric Administration’s (NOAA) Maritime Heritage Program. “When I handed him my archaeological report, he was speechless.”

All I know is that this first-time kayaker was plunked down into a very special experience, from the history of the area, to the beauty of the wildlife. More than 100 species of birds nest there and cohabit with other creatures like river otters and beavers. I felt fortunate to witness eagles soaring overhead and osprey constructing huge nests on the peaceful wreckage that was once intended for an entirely different purpose.

Jody Hedeman Couser, director of the Chesapeake Conservancy, is hoping that more people will take an interest in visiting the area as it continues the journey toward national recognition.

“Mallows Bay has the largest collection of historic shipwrecks in the Western Hemisphere and they are full of wildlife,” she said. “The Chesapeake Conservancy is proud to be a lead partner in the steering committee seeking the designation and we’re thrilled that Mallows Bay is just a step closer towards becoming the first National Marine Sanctuary designated in more than 20 years and the first ever in the Chesapeake.”

Mallows Bay in the Potomac River is littered with wreckage of warships built during World War I.

A variety of wildlife inhabit Mallows Bay, sometimes building nests on the wreckage of warships.

Wreckage of WWI-era warships can be found in Mallows Bay on the Potomac River.