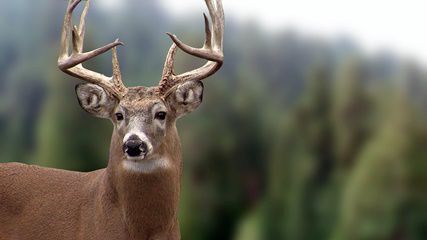 The Pennsylvania Game Commission warns motorists to be aware of deer in the coming weeks due to increased activity and change to standard time.

There are several changes to Pennsylvania’s firearms deer season, according to the Pennsylvania Game Commission.

The season begins on Saturday and continues on Sunday, providing hunters a full weekend to be afield. Deer season then runs through Dec. 11, closing only on Dec. 5.

Licensed hunters can kill either an antlered or antlerless deer at any time throughout the season anywhere in the state. That’s a change from last year, when just 10 wildlife management units allowed concurrent buck and doe hunting.

The number of antlerless tags available this season was reduced in many WMUs compared to last to account for the additional days of antlerless hunting.

The commission this year made it possible for hunters willing to use antlerless tags to get more of them if the allocation hasn’t been sold out. It adopted a regulation change allowing hunters to hold up to six antlerless licenses at a time. That’s up from three previously.

A few WMUs still had antlerless tags available for purchase this week.

A nationwide ammunition shortage due to the supply chain issues affecting other products has left hunters searching far and wide for ammo in the first place and then shelling out more money if they do find it.

One of the nation’s biggest ammunition manufacturers, Vista Outdoor in Anoka, Minnesota, told the Associated Press it’s “ramping production ahead of schedule at its Remington facility to meet unprecedented demand.”

The price of is almost any caliber ammunition is double what it was a year ago if you can find it. Manufacturers say the pandemic created new gun buyers along with more hunters looking for something to do outside, WISN-TV reported.

More than 570,000 deer hunters from around the world are expected to try their luck in this year’s nine-day season, Department of Natural Resources officials said.

Hunters are permitted to kill one antlered deer with a valid general hunting license, which costs $20.97 for adult residents and $101.97 for adult nonresidents.

Antlerless deer licenses can be used anywhere within the Wildlife Management Unit for which they’re issued.

A DMAP permit can be used only on the specific property for which it is issued.

Mentored hunters ages 7 and older can apply for one antlerless deer license. They can also apply for DMAP permits, following the same regulations as adults.

Hunters 12 or older who are certified through the Game Commission’s Hunter-Trapper Education program qualify to purchase general hunting licenses, which provide more privileges. Certified hunters 12 to 16 can obtain junior licenses, the least expensive of which cost $6.97 for residents and $41.97 for nonresidents.

Those holding senior lifetime licenses must obtain a new antlered deer harvest tag each year, free of charge, to participate in the season.

General hunting licenses can be purchased online, but as the season nears, hunters might find it better to purchase licenses in person. Hunters can carry a digital version of their general license afield, but still need their paper harvest tags. Deer licenses purchased online are mailed, so those harvest tags might not arrive in time if purchased too close to the start of the season.

For a complete breakdown of antler restrictions, WMU boundaries and other regulations, consult the 2021-22 Pennsylvania Hunting & Trapping Digest, which is provided to hunters at the time they purchase their licenses and available online at the Game Commission’s website, www.pgc.pa.gov.

Deer hunters everywhere statewide, meanwhile, must wear at all times a minimum of 250 square inches of fluorescent orange material on their head, chest and back combined, visible from 360 degrees, during the firearms deer season. An orange hat and vest will satisfy the requirement.

Nonhunters who might be afield during deer season and other hunting seasons should consider wearing orange, as well.

Hunters who kill a deer are required to affix a valid tag to the ear, not an antler, before the deer is moved. The tag must be filled out with a ballpoint pen and notched or cut with the correct date of harvest.

Hunters must then report their kill to the Game Commission within 10 days. Deer kills can be reported online at www.huntfish.pa.gov, by calling 1-800-838-4431 or by mailing in the postage-paid cards that are provided in the digest.

Mentored youth hunters are required to report deer kills within five days. And hunters with DMAP permits must report on their success within 10 days of the last possible date of harvest, regardless of whether they kill deer.

Up-to-date DMA boundaries can be viewed at www.pgc.pa.gov/CWD.

EXPLAINER: What is the Strategic Petroleum Reserve?

America’s Strategic Petroleum Reserve holds about 605 million barrels of oil in underground salt caverns in Texas and Louisiana. It was created following the 1970s Arab oil embargo to store oil that could be tapped in an emergency.

Target will keep stores closed on Thanksgiving for good

Target distribution and call centers will have some staff on Thanksgiving Day, Target said Monday, but stores will remain closed.

The national rate was 4.6% in October, and Pennsylvania lags most other states, tied at 40th among 50.

Electric SUVs generally are among the least reliable vehicles on the road, but it's not because of the batteries or electric motors that power them.

Millions more home tests for COVID-19 are hitting store shelves, but will there be enough for Americans hoping to screen themselves before holiday gatherings?

US to release 50 million barrels of oil to ease energy costs, gas prices

The move is aimed at global energy markets, but also at voters who are coping with higher inflation and rising prices ahead of Thanksgiving and winter holiday travel.

Viral Questions: Is travel safe during the pandemic this holiday season?

It can be safe if you're fully vaccinated against COVID-19, but officials say people who haven't gotten the shots should delay travel.

Kyle Rittenhouse was acquitted of all charges Friday. Here's the latest.

The Pennsylvania Game Commission warns motorists to be aware of deer in the coming weeks due to increased activity and change to standard time.