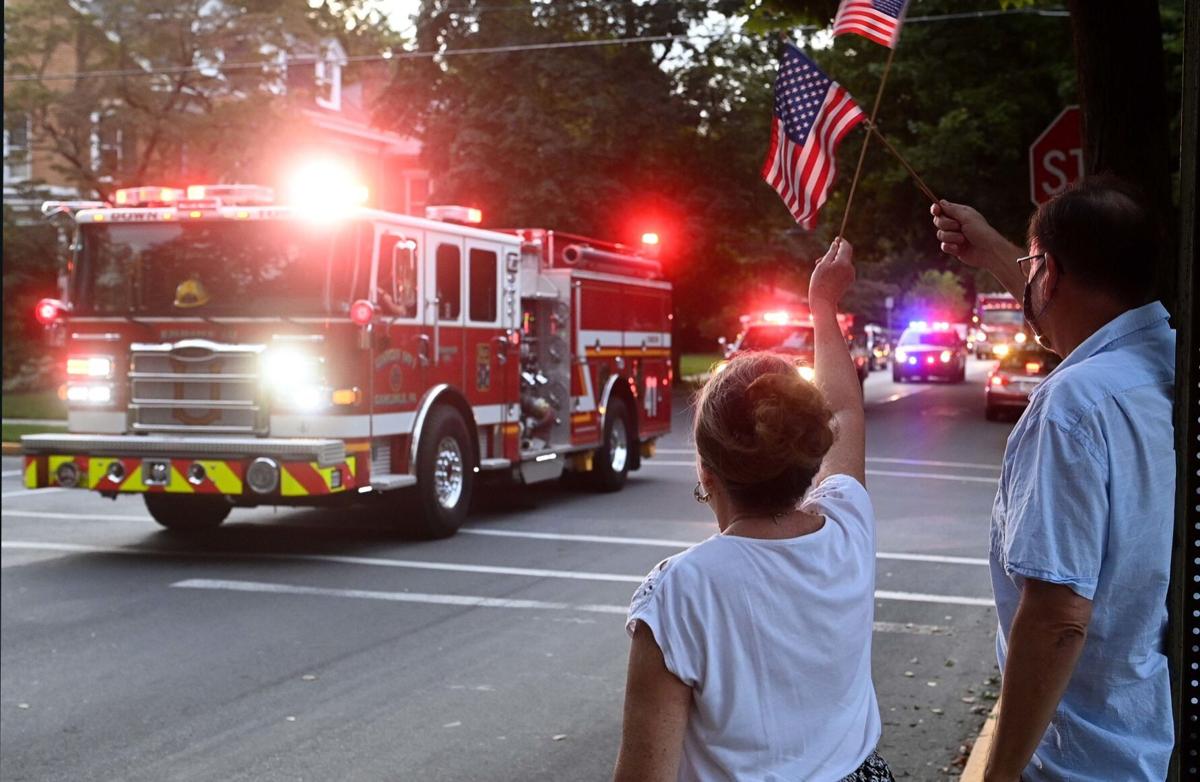 Eloise Smith, left, and Randy Crawford of Carlisle, wave American flags and cheer the Carlisle emergency services first responders. The responders, including police, firefighters, emergency medical services and dispatchers, held a parade around the borough of Carlisle Tuesday evening on the eve of Sept. 11. 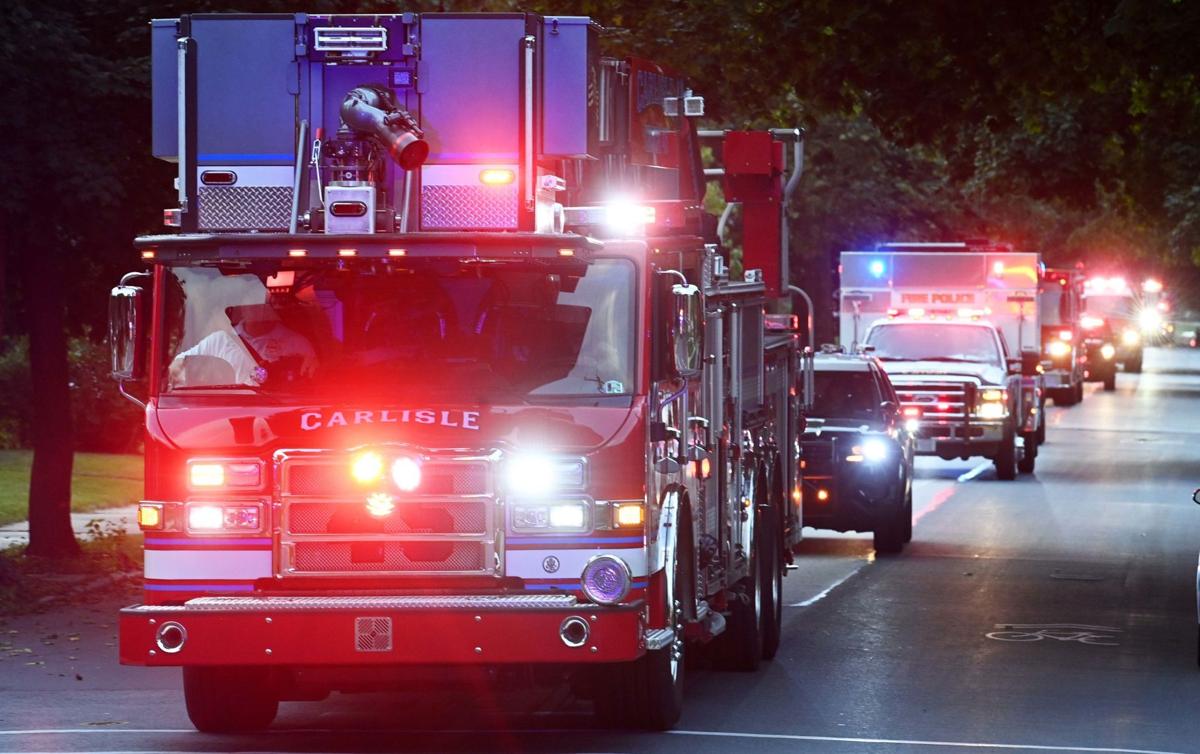 Carlisle emergency services first responders, including police, firefighters, emergency medical services and dispatchers, held a parade around the borough of Carlisle Tuesday evening on the eve of Sept. 11. 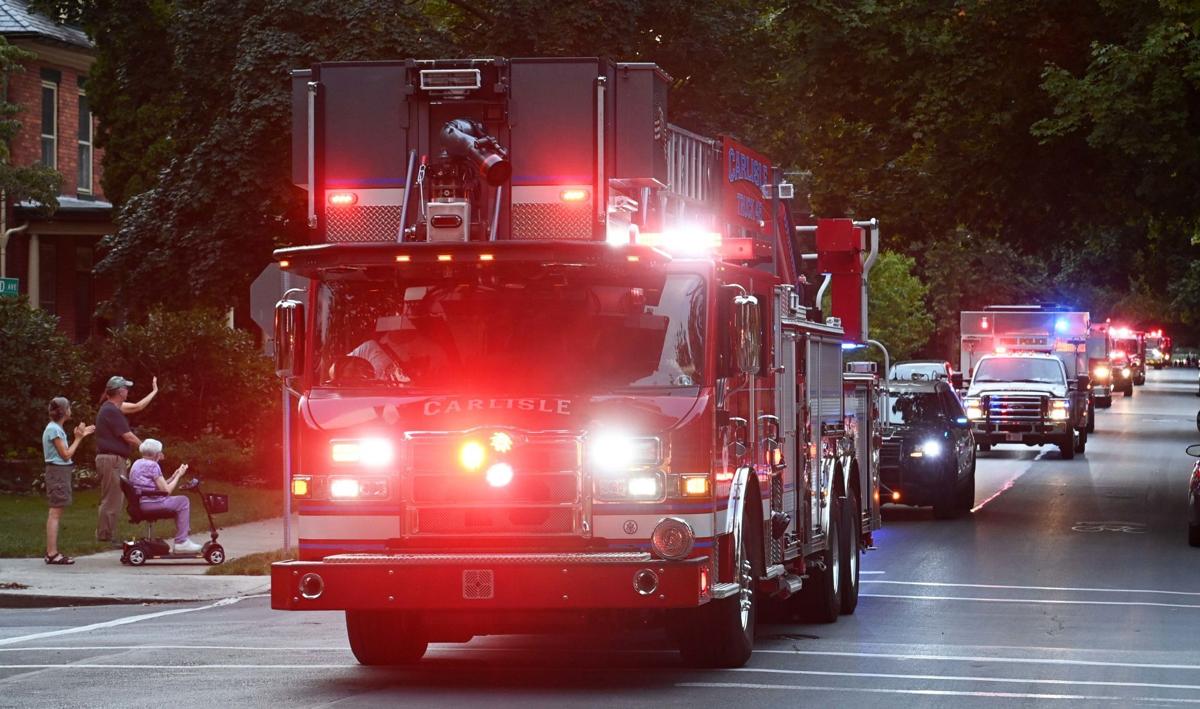 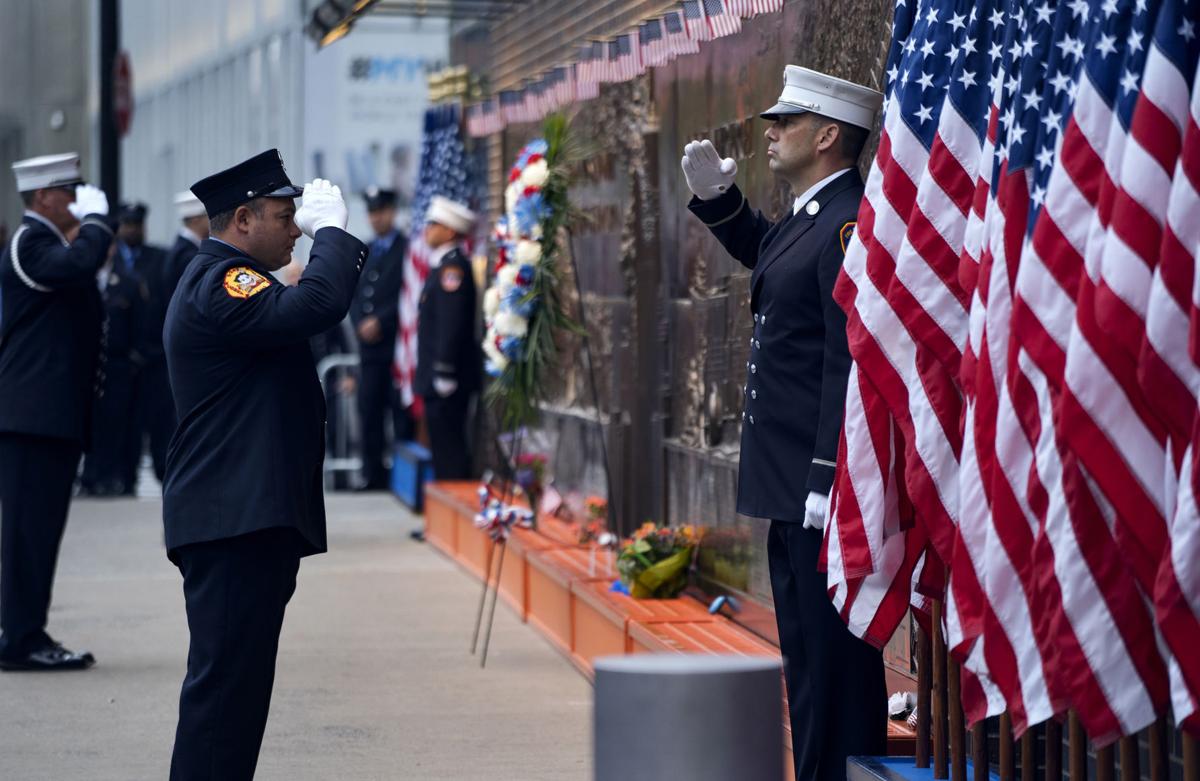 New York City firefighters salute in front of a memorial on the side of a firehouse adjacent to One World Trade Center and the 9/11 Memorial site. Because of the coronavirus, the Fire Department has urged members to stay away from the 2020 observances of the 2001 terror strike.

In a year when the coronavirus pandemic has reshaped countless American rituals, even the commemoration of 9/11 could not escape unchanged.

The 19th anniversary of the terror attacks will be marked by dueling ceremonies at the Sept. 11 memorial plaza and a corner near the World Trade Center, reflecting a divide over the memorial’s decision to suspend a cherished tradition of relatives reading victims’ names in person. Vice President Mike Pence is expected at both those remembrances in New York, while President Donald Trump and Democratic challenger Joe Biden plan to attend a truncated ceremony at the Flight 93 National Memorial in Pennsylvania.

In New York, the double beams of light that evoke the fallen twin towers were nearly canceled in the name of virus safety, until an uproar restored the tribute. The Fire Department has cited the virus in urging members to stay away from any observances of the 2001 attacks that killed nearly 3,000 people, among them almost 350 firefighters.

Some victims’ relatives say they understand the ground zero observance had to change in a year when so much else has. Others fear the pandemic is making plain what they have feared was happening unspoken: that the commitment to “Never Forget” is fading.

“It’s another smack in the face,” says Jim Riches, who lost his son Jimmy, a firefighter.

The father is staying home on the anniversary for the first time this year because he doesn’t want to take chances with the coronavirus after a prior illness. But he feels others should have the option of reciting the names of the dead on the memorial plaza, instead of listening to a recording.

Memorial leaders said they wanted to avoid close contact among readers, who are usually paired at the podium. But to Riches, a retired fire battalion chief and frequent critic of the memorial organization, the decision sounds like an excuse for sidelining the families’ role in commemorating 9/11.

“I wish they wouldn’t forget, but they’re trying to,” he says.

But Anthoula Katsimatides sees the differences this year as an effort to ensure victims’ relatives feel comfortable attending — including her mother, who hasn’t left home since March because health issues make her especially worried about the virus. But she is determined to go in honor of her son John, a bond trader, her daughter said.

In a year when many events have been called off, “this wasn’t canceled. It’s just been changed in such a way where we still get to pay tribute to our loved ones in a respectful and safe way,” said Katsimatides, who’s on the memorial board. She says the change wasn’t motivated by anything except a public health emergency.

This year’s plans have been a balancing act at the sites where hijacked planes piloted by al-Qaida terrorists crashed on Sept. 11, 2001: New York, the Pentagon and a field near Shanksville, Pennsylvania.

The Flight 93 memorial near Shanksville is trimming its usual 90-minute ceremony, partly by eliminating musical interludes. Memorial spokeswoman Katherine Cordek said the names of the 40 people killed there would be read, but by one person instead of multiple family members.

Military leaders will conduct the Pentagon’s ceremony without victims’ families in attendance, and their loved ones’ names will be recited by a recording, rather than readers on-site. Victims’ relatives can visit the Pentagon’s memorial in small groups later Friday.

In New York — where the nation’s deadliest coronavirus spike happened early this spring but has since been fairly well contained — leaders of the National Sept. 11 Memorial & Museum said their plan for a no-reading ceremony would honor both virus precautions and 9/11 families’ attachment to being at ground zero on the anniversary.

But another 9/11-related organization, the Stephen Siller Tunnel to Towers Foundation, quickly arranged its own simultaneous ceremony a few blocks away, saying victims’ relatives could recite names while keeping a safe distance.

“We need to keep letting America know what happened 19 years ago. And they need to see that emotion of the day, not a recording,” says chairman Frank Siller. He says he may attend both observances to honor the brother he lost, firefighter Stephen.

Meanwhile, Fire Commissioner Daniel Nigro told current firefighters in a memo last month that the department “strongly recommends” members not participate in 9/11 observances. The department did hold a limited-attendance ceremony Wednesday to add names to a memorial wall recognizing members who died after exposure to toxins unleashed in the wreckage.

Tensions over anniversary plans flared anew when the memorial announced last month it was nixing the Tribute in Light, twin blue beams that shine into the night sky over lower Manhattan. While there’s no official gathering to view the lights, the memorial cited virus risks to the installation crew.

The cancellation outraged some victims’ relatives, police and fire unions and politicians, who noted that construction sites around the city were deemed safe to reopen months ago. After the Tunnel to Towers foundation said it would organize the display on its own, Gov. Andrew Cuomo and former Mayor Mike Bloomberg, the memorial’s billionaire chairman, stepped in to keep the memorial-sponsored lights on. (Tunnel to Towers is now stationing lights at the Flight 93 memorial and the Pentagon.)

Still, the memorial’s moves fanned mistrust among some 9/11 victims’ relatives who wonder how long the name-reading and other observances will continue.

Katismatides, the board member, foresees the ceremony returning to normal next year.

Debra Epps has been to the ground zero ceremony every year. She said it means a lot to her to read names and add a few words in tribute to her brother Christopher, an accountant.

Still, she thinks the memorial was right to forgo the live name-reading this year. The virus has her concerned enough that she’s not planning to attend.

“It really is a hard decision to make, but I know that we’re still in this pandemic,” said Epps, who works in health care.

“I will remember my brother, no matter what,” she said.

Pa. House votes to bar shutting down churches in disasters

Toilet paper is back on store shelves. But you may not recognize some of the brands.

Pa. House votes to bar shutting down churches in disasters

With many teachers opting out of returning to the classroom because of the coronavirus, schools around the U.S. are scrambling to find replace…

When the coronavirus outbreak forced cruise lines to cancel trips to Alaska, it wiped out Midgi Moore's tour business, leaving her with thousa…

Viral Questions: Face shields instead of masks and getting COVID twice

The AP is answering your questions about the coronavirus in this series. Submit them at: FactCheck@AP.org.

Shapiro’s office said in court documents Wednesday that Stickman’s ruling “does not consider the manner in which COVID-19 is spread or the rationale for adopting the congregate limits.”

Eloise Smith, left, and Randy Crawford of Carlisle, wave American flags and cheer the Carlisle emergency services first responders. The responders, including police, firefighters, emergency medical services and dispatchers, held a parade around the borough of Carlisle Tuesday evening on the eve of Sept. 11.

Carlisle emergency services first responders, including police, firefighters, emergency medical services and dispatchers, held a parade around the borough of Carlisle Tuesday evening on the eve of Sept. 11.

New York City firefighters salute in front of a memorial on the side of a firehouse adjacent to One World Trade Center and the 9/11 Memorial site. Because of the coronavirus, the Fire Department has urged members to stay away from the 2020 observances of the 2001 terror strike.