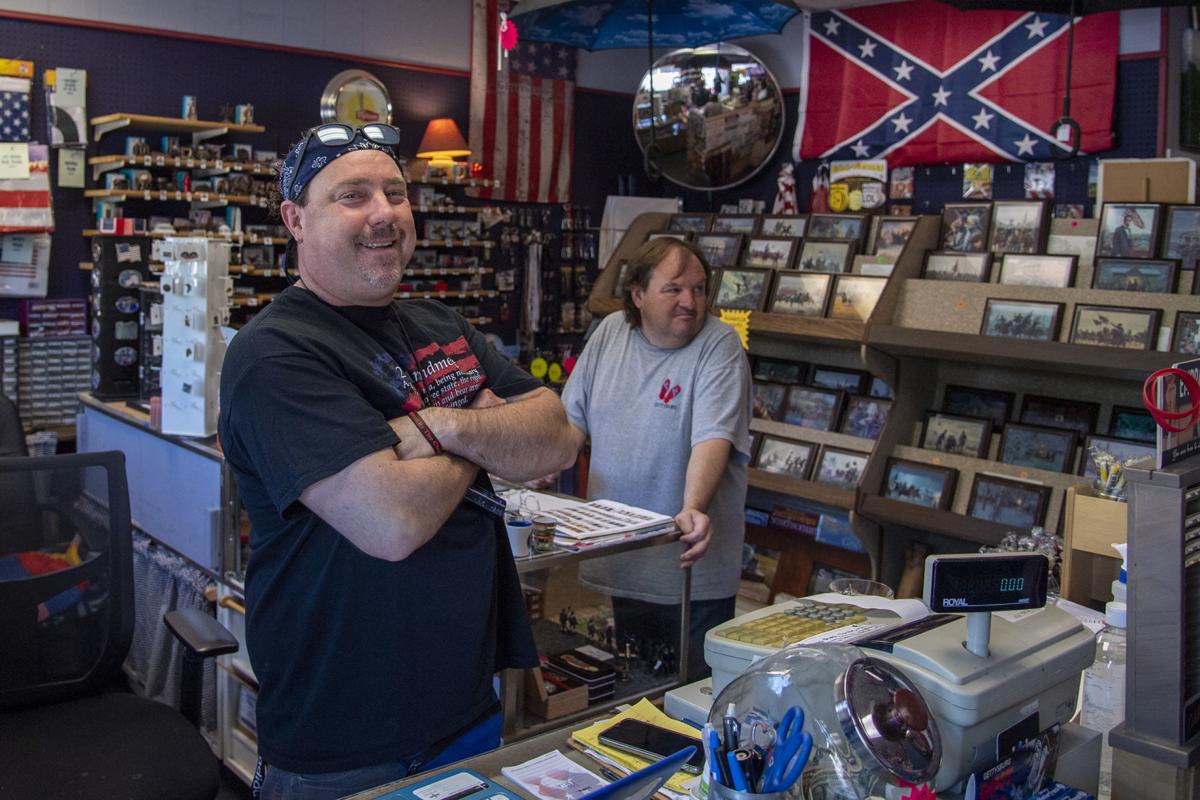 Erik Crist, left, and Chet Crist, say the demand and sales of Confederate battle flags and items at their shop, Flex & Flannigan's in Gettysburg, increases when there is a push to eliminate those items. 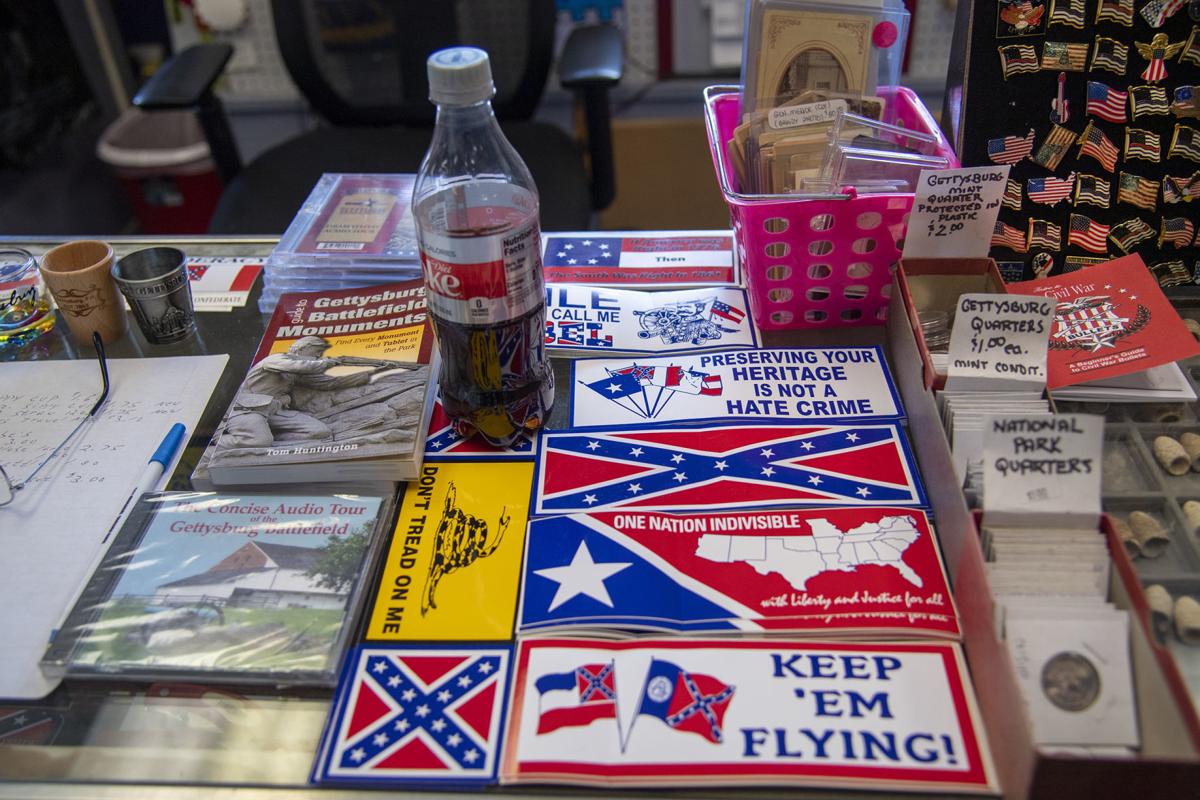 Confederate battle flag decals and stickers are shown among others for sale at Flex & Flannigan's in Gettysburg. 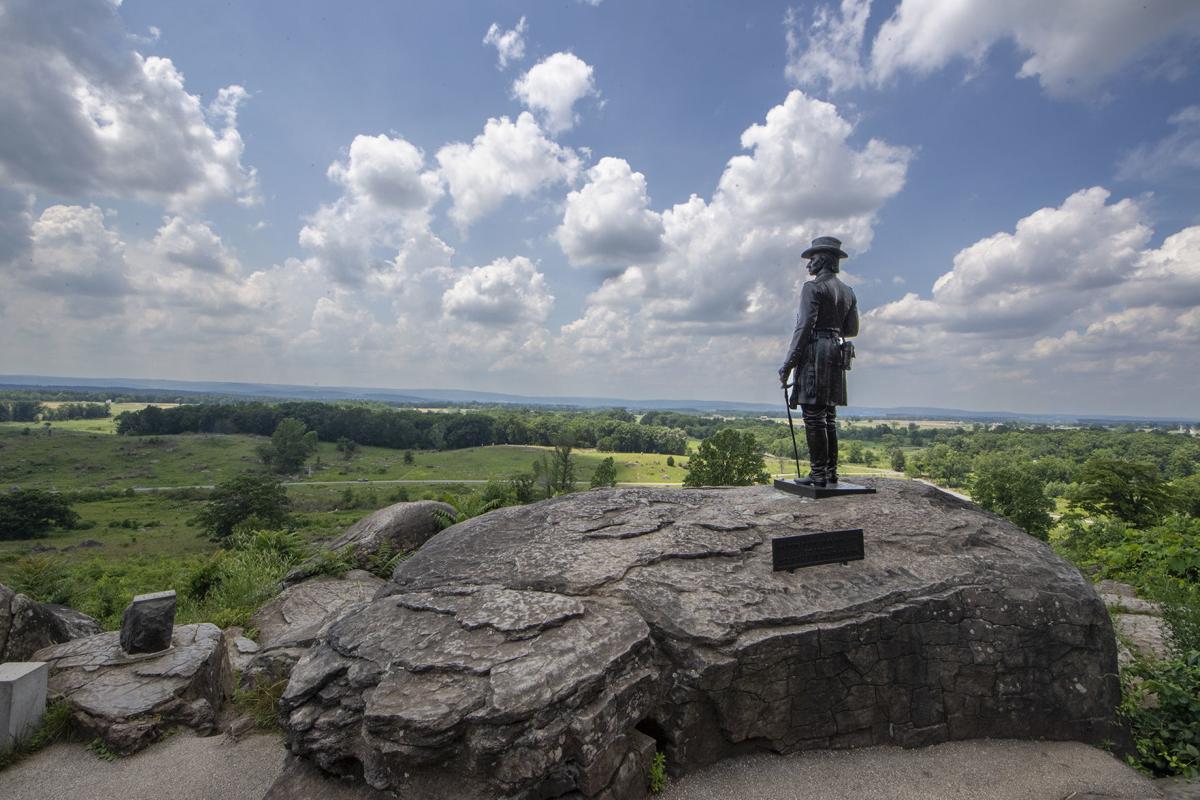 The monument to Brigadier General Gouverneur Kemble Warren is shown south of Gettysburg on Little Round Top in Gettysburg. 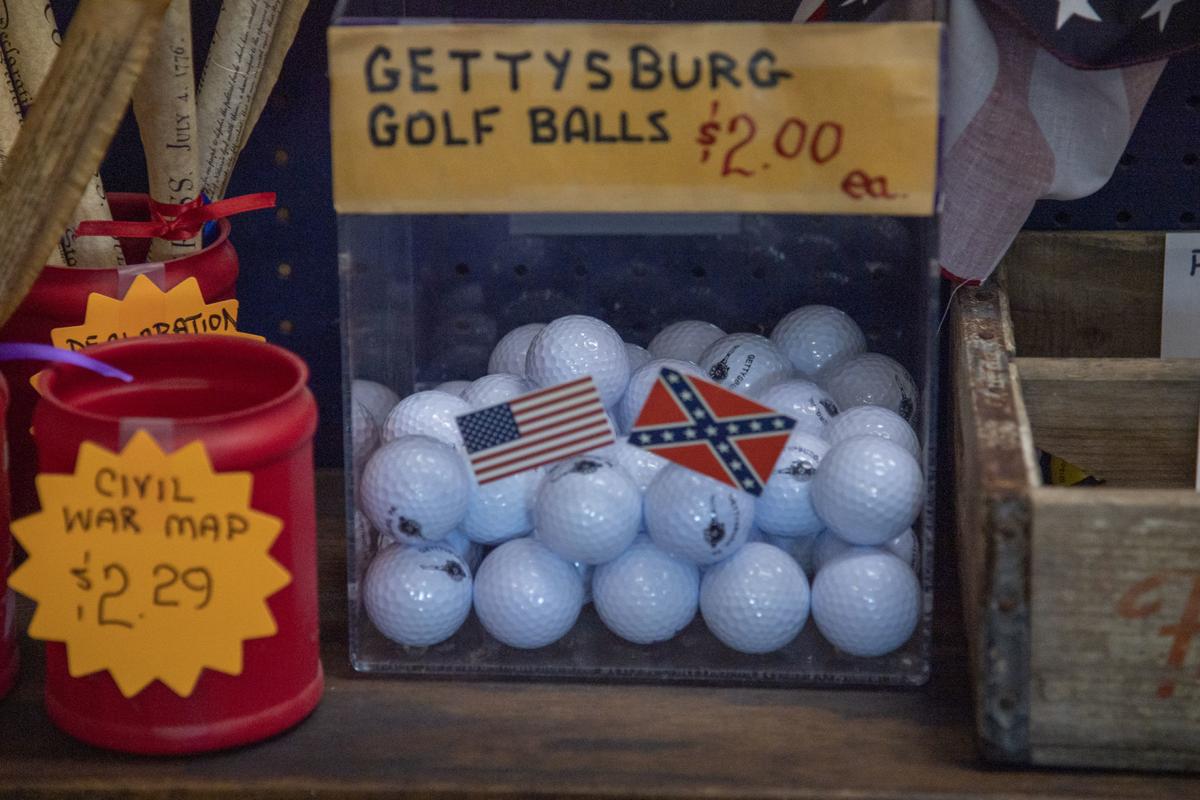 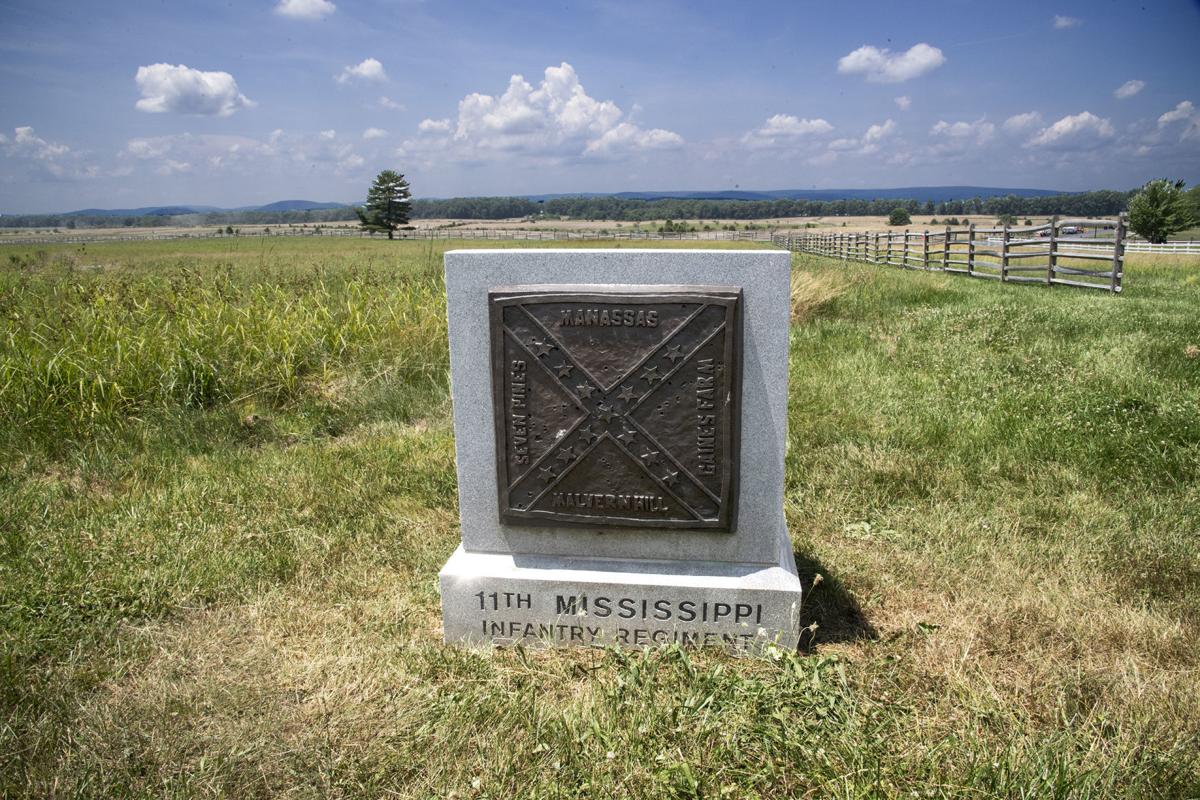 A monument for the 11th Mississippi Infantry Regiment is shown at the Gettysburg battlefield.

PHILADELPHIA — The nationwide push to take down symbols of the Confederacy, to question why anyone flies a rebel flag at all, has come to Gettysburg, a city of barely 1,100 on the South Dakota prairie, where the buffalo once roamed.

Gettysburg, South Dakota, is approximately 1,400 miles northwest of its sister city in Adams County, Pennsylvania, where Union troops defeated Confederate forces in the pivotal battle of the Civil War in 1863. The South Dakota city got its name, according to one account, because soldiers who fought in Pennsylvania settled there. Its slogan is “Where the Battle Wasn’t.” Its symbol, emblazoned on police cars and uniforms, is an American flag and the traditional Confederate battle flag.

The city adopted that symbol in 2009, and in 2015 addressed it in a Facebook post, claiming “no racist intentions.” An uncle of George Floyd, a Black man murdered by a Minneapolis police officer, happens to live there, and now is calling for its removal.

For the last two weeks, Charles Gable, borough manager for Pennsylvania’s Gettysburg, said he’s been getting phone calls from concerned residents of the South Dakota community who want advice on their logo.

“We don’t display it. We’ve never been asked to display it,” Gable said of the Confederate flag. “There’s two U.S. flags on borough property, and those are sacrosanct. It’s only the flag and maybe a couple of flowers. Who can complain about flowers?”

While the Confederate flag may not fly on borough property, it’s a symbol that tourists — about one million per year — are used to seeing in Gettysburg, population 7,700. They can buy Confederate bath mats and bikinis in town gift shops, or order one of eight burgers named after Confederate generals at a local bar. The Gen. Robert E. Lee burger has ham and Swiss.

The Confederacy lost 3,903 soldiers and the Union 3,155 during the bloody, three-day battle that raged from July 1 to July 3. Across the 6,000 acres of Gettysburg National Military Park, more than 1,300 monuments have been placed since the war ended, and approximately two dozen are dedicated to the Confederacy and its soldiers. The largest is topped with a statue of Lee on horseback. Many Confederate monuments were erected in the 1960s and 1970s, during the height of the civil rights era. A small marker for the 11th Mississippi Infantry Regiment was placed there in 2000, featuring the Confederate flag etched into stone.

Martz said the flag is rarely displayed on its own at the battlefield unless it’s directly related to a historical event. In 2015, after a white supremacist shot and killed nine Black churchgoers in South Carolina, many of the nation’s retailers stopped selling the flag. Martz said the battlefield’s bookstore removed all single pieces of Confederate memorabilia. That eliminated approximately 11 of the 2,600 items sold there, he said. Book covers bearing the flag’s image, for instance, were allowed to stay.

“In the case of, like, belt buckles and pins, that was removed,” Martz said.

Scott Hancock, an associate professor of history and Africana studies at Gettysburg College, said the park’s museum and visitor center does an excellent job of laying out the causes of the conflict, that the Confederacy was fighting to preserve slavery.

“If you go on the battlefield and never go in the museum, you would never know about slavery, would never know that there was anything to do with Black people at all in Gettysburg,“ he said.

Hancock said he would like to see the battlefield’s Confederate monuments put into context, perhaps with placards informing visitors that many were erected during the civil rights era to “protect and maintain white supremacy.” Without that context, Hancock said, he’d rather see those monuments removed.

While Gettysburg, like many small towns in Pennsylvania, has had its own Black Lives Matter protests in the wake of George Floyd’s murder, there have been no physical attempts to remove battlefield monuments.

A few blocks away from the battlefield, the Gettysburg Heritage Center, a former wax museum now run by the nonprofit Gettysburg Nature Alliance, is phasing out standalone Confederate flags from its vast gift shop. If the shop does sell an item that features the flag, said alliance president Dru Anne Neil, a pamphlet will be included “to remind people that the flag’s use, from our perspective as a museum, should be used only for educational purposes within the context of the actual fighting that occurred during the Civil War.”

“There’s a difference between education and glorification,” Neil said.

On a recent day on Chambersburg Street, just off the town square, the LGBTQ rainbow flag outnumbered all others for Pride month. Gettysburg’s fourth annual Pride celebration was held virtually this year. Jacob Schindel, owner of Ragged Edge Coffee House, said a few of his rainbow flags were stolen. He also said fewer businesses in town are flying the traditional Confederate flag.

The bulk of Gettysburg’s gift shops are located on Steinwehr Avenue, where one owner of several stores said she wasn’t interested in talking about the flag and asked the Inquirer not to visit or photograph her properties. Six of eight top sellers on the website featured Confederate flags.

At Flex & Flannigan’s, another gift shop on Steinwehr, owner Erik Crist welcomes the renewed push for flag bans, because he sells more of them. Confederate items outsell Union pieces “10 to 1.”

“We loaded up,” Crist said. “We just got three cases of Confederate flags the other day.”

Customers can buy Confederate bathing suits, swim trunks, bedsheets, and shower curtains. One bumper sticker reads: “I believe the South was right. And I don’t believe in slavery then and now.” Crist even helps customers pick a more obscure Confederate flag if they’re nervous about blowback from neighbors.

“We tell them to fly the first Confederate flag, because no one knows what it is,” he said. “That’s my secret.”

That flag features seven white stars on a blue canton with a field of three alternating stripes, two red and one white. It was the national flag of the Confederacy. The familiar battle flag was never the national flag.

Above the door, Crist displays an “Advance the Colors” award the store received in 2015 from the Sons of Confederate Veterans for continuing to sell the rebel flag.

Customer Merle Toms, of Frederick County, Maryland, bought the more conspicuous flag — a few of them.

“Why? Because everybody else is against it,” Toms said.

Kenneth Huston, president of the Pennsylvania NAACP, said there’s no safe space for the flag, even in Gettysburg, and no room to discuss its meaning.

“The flag represents hate,” he said. “It’s not a symbol that we as a civil rights organization want to be seen anywhere. That flag was a terror symbol for Black people. It should not fly.”

A look at the location of COVID-19 cases in Pennsylvania by county.

Viral Questions: Is it safe to reopen schools during the pandemic?

The AP is answering your questions about the coronavirus in this series. Submit them at: FactCheck@AP.org.

A Westmore­land County jury convicted Gregory Baucum, 49, on two misdemeanor counts Wednesday but acquitted him on a felony charge.

The Pennsylvania attorney general's office released an annual report showing tips to the Safe2Say Something program had dropped since the pandemic sent students home.

Tropical storm Isaias whips up eastern US, killing at least 8

At least eight people were killed as Tropical Storm Isaias battered the U.S. East Coast with rain and fierce winds after making landfall as a …

YORK — A man is accused of breaking into York city hall, damaged computers and the phone system, and caused the temporary closure of the building.

Mail piling up. Constant attacks from the president. Cuts to overtime as record numbers of ballots are expected to pass through post offices t…

Erik Crist, left, and Chet Crist, say the demand and sales of Confederate battle flags and items at their shop, Flex & Flannigan's in Gettysburg, increases when there is a push to eliminate those items.

Confederate battle flag decals and stickers are shown among others for sale at Flex & Flannigan's in Gettysburg.

The monument to Brigadier General Gouverneur Kemble Warren is shown south of Gettysburg on Little Round Top in Gettysburg.

A monument for the 11th Mississippi Infantry Regiment is shown at the Gettysburg battlefield.