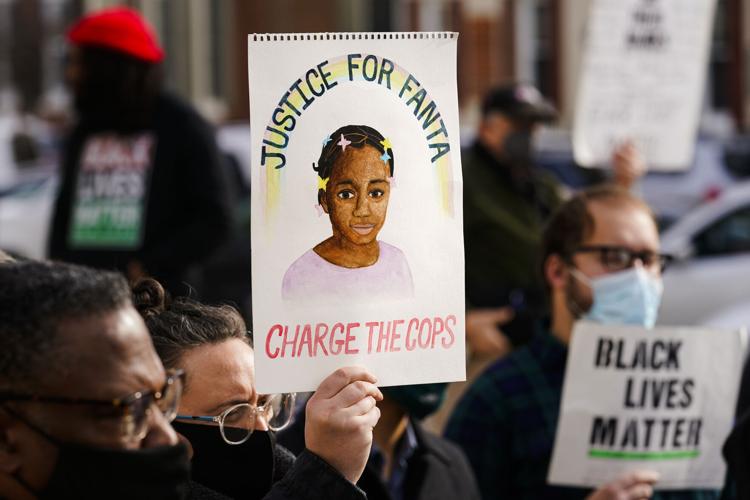 Protesters call for police accountability in the death of 8-year-old Fanta Bility, who was shot outside a football game, at the Delaware County Courthouse in Media, Pa., on Jan. 13, 2022. Three former police officers, who had been charged in the killing of the 8-year-old girl after they opened fire in the direction of a crowd leaving a high school football game in a suburban Philadelphia town, pleaded guilty Thursday to 10 counts each of reckless endangerment.

PHILADELPHIA — Three former police officers who were charged with killing an 8-year-old girl after they opened fire in the direction of a crowd leaving a high school football game in suburban Philadelphia pleaded guilty Thursday to 10 counts each of reckless endangerment.

The negotiated pleas included a dismissal of manslaughter and involuntary manslaughter charges against the three former Sharon Hill Borough officers — Sean Dolan, 26, Devon Smith, 35, and Brian Devaney, 42 — in the August 2021 death of Fanta Bility. Prosecutors said the plea deal was reached in consultation with the girl’s family, who said ending the case was necessary so relatives could start healing.

“The agony we feel constantly re-living the loss of our dear Fanta, who was just 8 years old when she was killed by Sharon Hill police officers, is impossible to describe with words,” Bility’s uncle Abu Bility read from a family statement after the hearing, describing the trauma her mother and siblings went through witnessing the shooting.

“After much prayer and discussion with our family, we determined that it was in our best interest for the district attorney to ensure that the police officers take responsibility for their actions, admit to their reckless conduct endangering many, and killing our Fanta,” he said.

A phone call to the law firm representing Devaney, Dolan and Smith was not returned late Thursday. The three will remain free on bail while awaiting a sentencing hearing scheduled for January. They were fired from the Sharon Hill Borough Police Department a few days after charges were recommended.

Their attorneys had sought several times unsuccessfully to have the manslaughter charges dropped. They argued in a September hearing that the men had not intended to harm anyone in the crowd and were being unfairly targeted because they were police officers.

The shooting happened after two teenagers fired shots at each other outside the football game and fled. The officers heard the shots and told other officers they believed the gunfire had come from a car that was driving toward them. Devaney was not wearing a body camera, and the other two officers did not turn their cameras on, investigators found.

The three fired 25 shots toward the car and the crowd of people leaving the game in the borough near Philadelphia International Airport. Four people were wounded — three by police gunfire— and Bility was killed.

Ballistics testing could not determine which officer fired the shot that killed her, but a grand jury recommended that all three face charges.

Bility had attended the game with her mother and an older sister who was also shot but survived. Her family, who belongs to a community of immigrants from Guinea, described her as a sweet child who had a smile for everyone.

“Fanta’s death was a tragedy for her family, her friends, and for the entire community — and nothing that happened in the courtroom today can lessen the grief that we have all felt since that terrible night,” Delaware County District Attorney Jack Stollsteimer wrote in an emailed statement.

The two teenagers who fired the initial shots were originally charged with murder in Bility’s death, but those charges were later dropped.

The Bility family has filed a federal lawsuit against Dolan, Devaney, Smith, and the Sharon Hill Borough Police Department.

During her initial court appearances, Bauer expressed an ideology that appeared to comport with the “sovereign citizens” extremist movement’s belief that the U.S. government is illegitimate.

Jane Roh, a spokeswoman for Krasner, said that the appeal demonstrated House Republicans “care little about our democracy, the Constitution, the law or the truth.”

Bryan Kohberger, 28, is charged with four counts of first-degree murder and burglary in connection with the stabbing deaths in Moscow, Idaho.

Lombardo, who was taken to a hospital, was charged with attempted murder and forcible assault of a federal officer and a person assisting such an officer.

The search warrant for Bryan Kohberger ’s home and Washington State University office was unsealed by a Washington state judge on Tuesday.

With the mystery of the boy's identity solved, police now hope to learn how he died, even if it's too late to make an arrest.

Under a photo of the pardon on Instagram, the Philadelphia rapper-turned-entrepreneur, who has been active in criminal justice reform for years, vowed to keep doing more for his community.

Protesters call for police accountability in the death of 8-year-old Fanta Bility, who was shot outside a football game, at the Delaware County Courthouse in Media, Pa., on Jan. 13, 2022. Three former police officers, who had been charged in the killing of the 8-year-old girl after they opened fire in the direction of a crowd leaving a high school football game in a suburban Philadelphia town, pleaded guilty Thursday to 10 counts each of reckless endangerment.