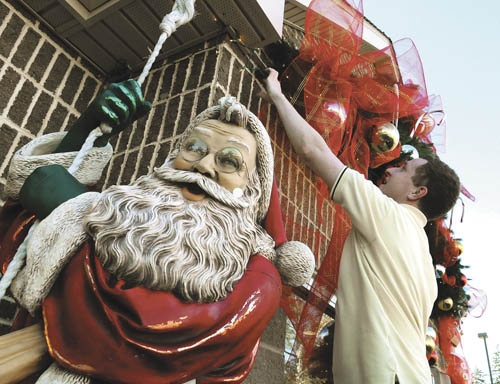 Steven Shughart, a floral designer for Royer's Flowers and Gifts, located on York Rd., Carlisle, decorates the exterior of the flower shop with Christmas decorations on Friday afternoon as they get ready for the holiday season. 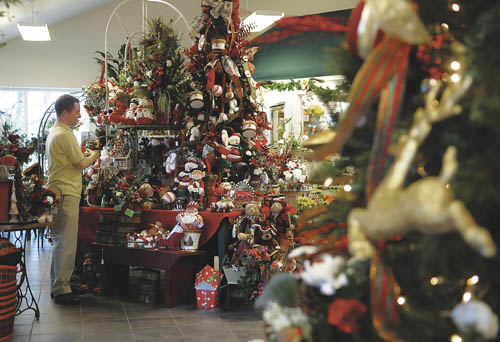 Steven Shughart, a floral designer for Royer's Flowers and Gifts, located on York Rd., Carlisle, decorates the flower shop with Christmas decorations on Friday afternoon as they get ready for the holiday season.

It could be a pitch for the worst horror film of all time.

But that was the case at most chain retail stores in the days leading up to Halloween. In one aisle, shoppers found creepy and scary Halloween decorations. When they turned the corner to another aisle, the shoppers found themselves in a winter wonderland.

Christmas this year, much like last year, came more than a little early, with some retailers putting out holiday stock roughly two months before the big day.

As she picked through a bin of fall decorations at Michaels craft store at Carlisle Crossing in South Middleton Township, Danielle Haas of Carlisle said the early Christmas offerings won't wear her holiday spirit thin by the time the season actually gets here.

But, she added, it's not easy to embrace Christmas around Halloween.

"It's tough to get in the (Christmas) spirit that early," Haas said.

Some business owners also said they find it hard to embrace Christmas when the leaves are just beginning to change color.

About 15 years ago, said Greg Royer, president and CEO of Royer's Flowers & Gifts, putting out Christmas stock and putting up holiday decorations this early was unheard of.

But over the years, the trend has turned to the sooner the better.

According to a National Retail Federation survey conducted and released in October, 37 percent of Americans said they will begin holiday shopping by Halloween.

Though he's not a fan of starting the Christmas season in early November, Royer said, he has to stock merchandise that shoppers want.

Outside the store, giant toy soldiers stand at attention and a sleigh packed with brightly wrapped presents sits on the front lawn.

Royer cited the push by larger chain retail stores as the reason his stores have Christmas wares out presently. It's a matter of keeping pace.

"What we have found is we were... late and missing sales," Royer said.

And there's big money to be lost if shoppers head elsewhere for their holiday gifts.

Stephanie Patterson Gilbert is also torn when it comes to the question of when to put Christmas merchandise of the shelves of her North Pitt Street candy and gift shop.

On principle, the owner of Georgie Lou's Retro Candy & Gifts said, she doesn't like bringing out Christmas merchandise too early.

It seems to rush November along too quickly, she said, and nearly skips right over Thanksgiving.

But, Patterson Gilbert added, she could miss out on sales.

"I'm just paranoid if we wait we'll miss out," she said.

Despite having a shelf life of about a year, having Christmas candy out early may turn some shoppers away with thoughts that the food will go bad by the time the holiday rolls around.

Georgie Lou's has a few Christmas items out now, Patterson Gilbert said, but customers are still more interested in fall-oriented sweets. The full line of Christmas candy will be on shelves around Thanksgiving.

However, one question Patterson Gilbert finds herself asking is whether she is missing sales by not putting out Christmas items early. On the other hand, if she puts the items out closer to the holiday, she may be stuck with unsold treats into the new year.

That doesn't mean, however, there's not pressure to get the holiday merchandise out when other businesses do.

"We feel the pressure as a business to put Christmas (merchandise) out (early)," Patterson Gilbert said.

Last year, Patterson Gilbert said, the week before Christmas was her busiest time of the season, so she may not be missing out on too many sales.

Susan and Scott Sheipe, both of Newville, dropped by Georgie Lou's to pick up a few sweets.

Despite Christmas merchandise in some stores and talk of holiday shopping, Susan Sheipe said it's still a little early for the end-of-the-year holiday just yet.

"It's not cold enough yet," she said.

Nothing Sweeter, owned by Annette Lane and her daughter, Nicole Hall, is slated to open on Jan. 24. It’s grand opening and ribbon-cutting is scheduled for 11 a.m. on Jan. 25.

Construction for the facility at John H. Frederick Field at Soldiers and Sailors Memorial Park expected to begin later this year.

Construction for the facility at John H. Frederick Field at Soldiers and Sailors Memorial Park expected to begin later this year.

A Newville man faces aggravated assault charges after an incident earlier this month.

Carlisle Police are looking for a man they say stole three Google WiFi routers from Office Max in the 600 block of East High Street on Saturday.

District administrators recently briefed board members on suggested changes to the school calendar that could also impact spring parent-teacher conferences and professional development days for the faculty.

Meteorologist: Saturday precipitation to be messy for Cumberland County, but too early for snowfall counts

This past weekend may have featured springlike temperatures in the 70s, but winter will be in full force Thursday, with some type of wintry pr…

Today's Sentinel police log includes information on a hit-and-run and a DUI arrest after a crash in Perry County.

Steven Shughart, a floral designer for Royer's Flowers and Gifts, located on York Rd., Carlisle, decorates the exterior of the flower shop with Christmas decorations on Friday afternoon as they get ready for the holiday season.

Steven Shughart, a floral designer for Royer's Flowers and Gifts, located on York Rd., Carlisle, decorates the flower shop with Christmas decorations on Friday afternoon as they get ready for the holiday season.
© Copyright 2020 The Sentinel Newspaper, 327 B St. Carlisle, PA | Terms of Use | Privacy Policy
Powered by BLOX Content Management System from TownNews.com.
You don't have any notifications.