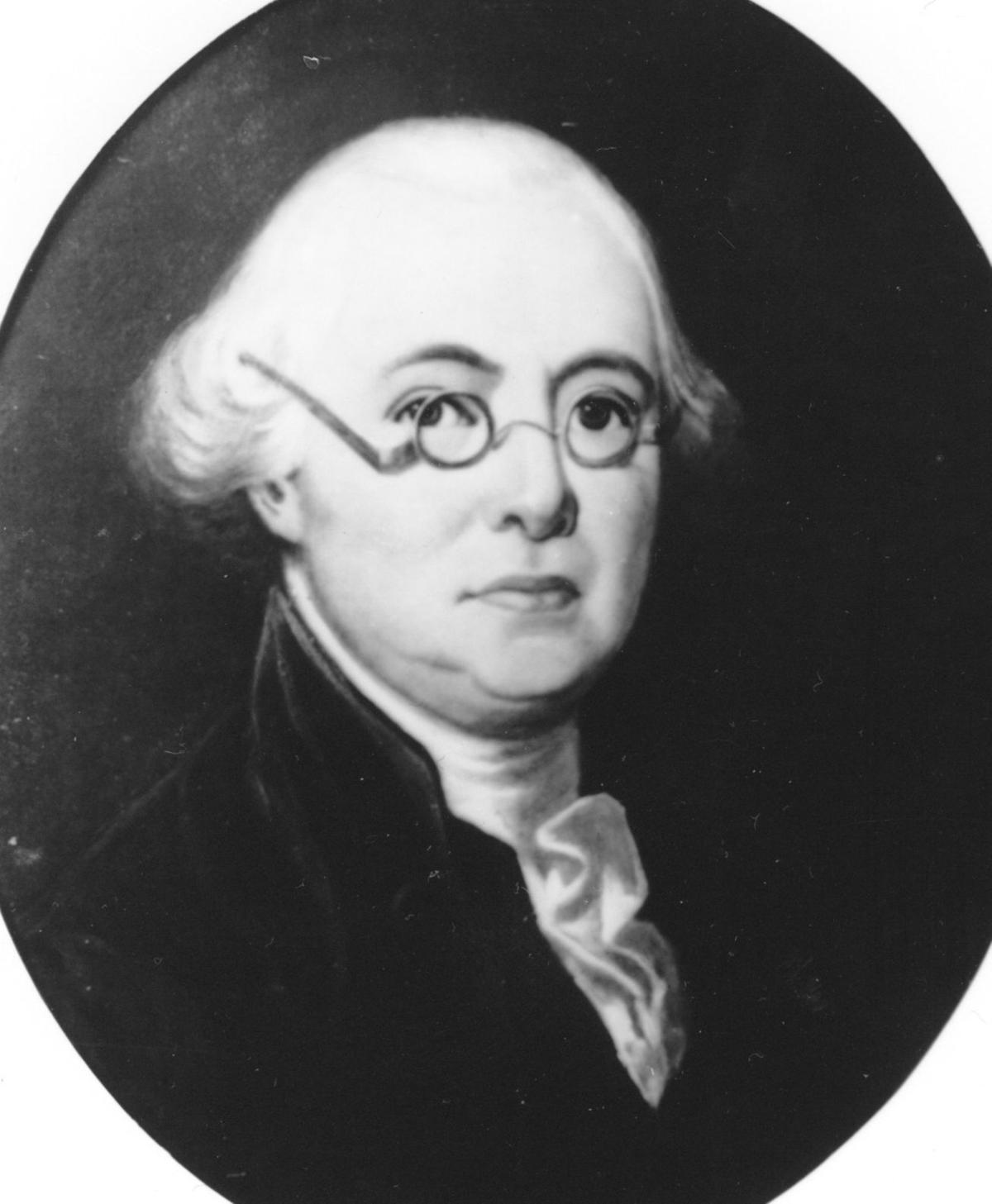 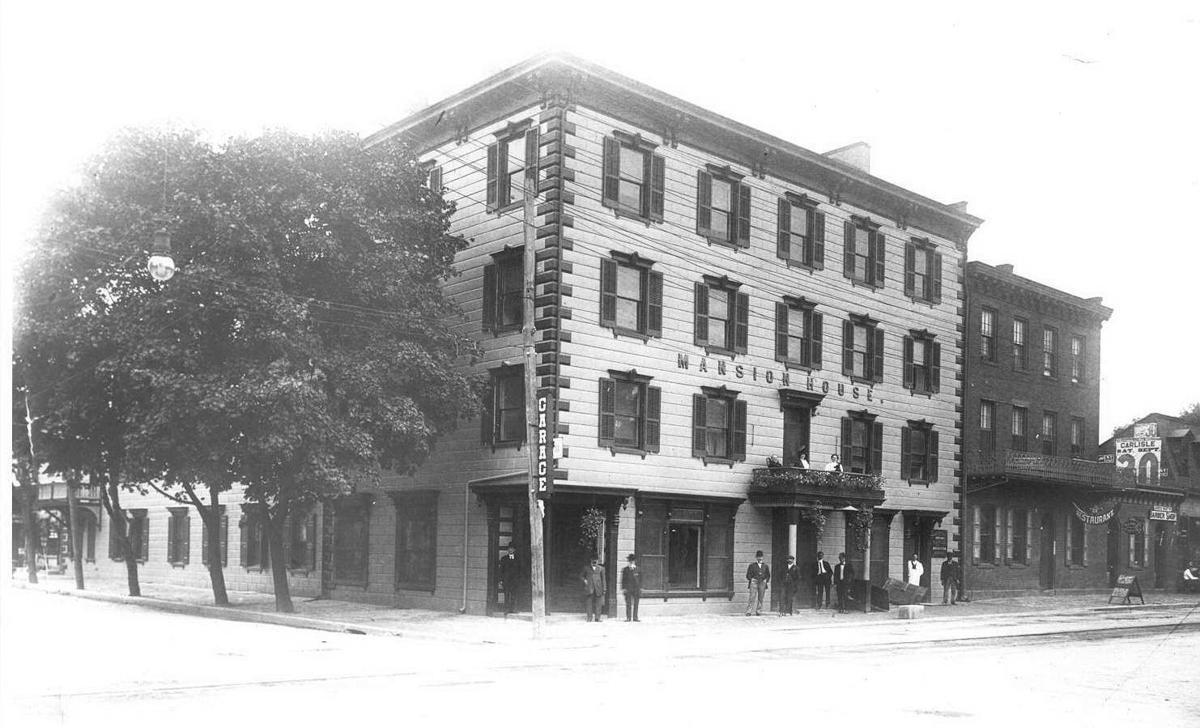 The James Wilson Mansion House hotel was built on the site of the home of a Carlisle attorney who became an associate justice of the U.S. Supreme Court. 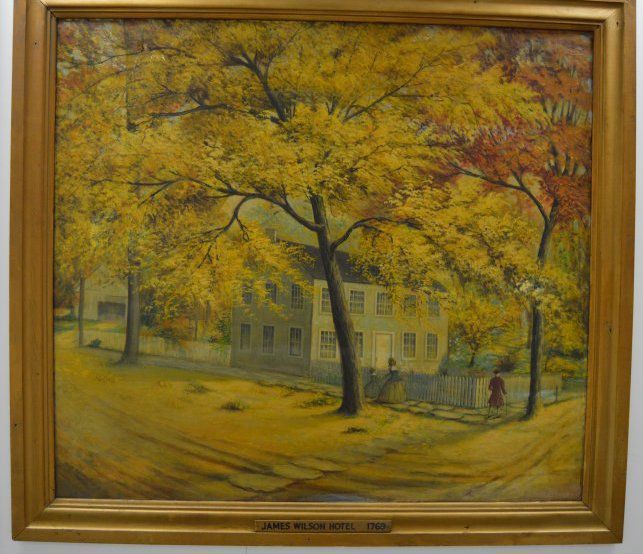 This painting shows the Carlisle home of James Wilson, a local attorney who became one of the first associate justices of the U.S. Supreme Court.

History suggests James Wilson failed to heed the warning from his mother Alison.

“Oh Jamie. … You’ll find this world and all its glory but a miserable comforter to you,” she wrote to him from Scotland.

In the lead-up to the American Revolution, Wilson had settled into a house in downtown Carlisle with his wife and children. Life was good for the Wilson family in the early 1770s.

“His law practice thrived as never before,” historian Peter Huber once wrote about Wilson. “He became the outstanding lawyer in the area.”

From 1770 to 1774, Wilson appeared as an attorney in 346 of the 819 cases docketed in the local court system, according to the book “Cumberland Justice: Legal Practice in Cumberland County 1750-2000” published by the county bar foundation.

But this was still early in a legal career that peaked in late September 1789 when President George Washington appointed Wilson an associate justice on the newly formed U.S. Supreme Court.

The website oyez.org includes a profile of Wilson who served as a justice until his death on Aug. 21, 1798. “His success on the Court swiftly ended when his obsession with advancing his wealth and status returned,” the profile reads. “The greatest judicial mind of the new republic died a disgraced man.”

The roots of his troubled life go back to a farm in northern Scotland where Wilson was raised by pious parents who wanted him to become a Presbyterian minister. Born on Sept. 14, 1742, James was their eldest son.

“He was taught that the pomp and glory of this world are trivial compared to the rich rewards awaiting those chosen for Heaven,” Huber wrote. “Nevertheless, Wilson spent his adult life seeking power and riches in this world.”

The problems began when Wilson went away to study at St. Andrews University where he was stuck at the bottom of the social ladder. Faith in the afterlife gave way to a deep resentment Wilson felt for being snubbed by the sons of upper class families.

When his father died, Wilson had to leave the university to help support his mother and siblings. He took a job as a tutor to wealthy families and again felt the pain of a low social rank, Huber wrote. “It was absolutely clear … he would never be satisfied unless he could become rich and powerful.”

Wilson soon realized the best place to accomplish both goals was America. His mother resisted at first, but caved to the inevitable while harboring reservations about his growing success and prosperity in the New World. As Wilson worked his way up the secular ladder, she kept urging him to renew a focus on faith.

He was 23 when he arrived in Pennsylvania in 1765. Wilson began as a tutor at the College of Philadelphia before he turned to study law under John Dickinson, the namesake of Dickinson College. After a year of study with Dickinson, Wilson was admitted to the Pennsylvania bar in 1767.

Facing too much competition in Philadelphia, Wilson moved to Reading, Berks County, where he practiced law from Chester in the east to Carlisle in the west. By 1768, he was qualified to argue cases before the Supreme Court of Pennsylvania.

A year later, Wilson moved to Carlisle where his legal practice morphed into politics in 1774 when he published a pamphlet that promoted the then-treasonable notion that the British Parliament had no power over the colonies.

“This publication was widely circulated throughout America and England, garnering an international reputation,” according to the profile on oyez.org. “In spite of this pamphlet, Wilson was hesitant to advocate for total independence from England.”

“After open warfare broke out in 1775, Wilson helped to organize the militia in Cumberland County around Carlisle,” Huber wrote. “For his efforts, he was given a commission as a colonel.” Wilson was also elected to represent Pennsylvania in the Second Continental Congress.

As the war raged, Wilson was caught in the middle of the debate between the Whigs, who favored independence, and the Tories, who opposed it. In the end, he voted in favor of severing ties with England and later signed the parchment copy of the Declaration of Independence on Aug. 2, 1776.

“As Wilson had feared, the Declaration of Independence was like a fuse to a political bomb in Pennsylvania,” Huber wrote. The fervor prompted the Whigs to push through a state constitution that did not sit well with Wilson and his friends in the Philadelphia establishment.

“With its lack of separation between the legislative, executive and judicial branches of government, it amounted, in Wilson’s eye, to mob rule,” Huber wrote. “With all power vested in the legislative assembly it could lead to a tyranny far worse than the colonies had experienced at the hands of Parliament, Wilson said.

“As could be expected of a man whose basic drive was to be rich and powerful himself, Wilson sided with the aristocrats, not the common people,” Huber wrote. “He returned to his home in Carlisle, but no longer felt he belonged there in a town filled with enthusiastic supporters of the new state constitution.”

Wilson had moved to Carlisle mainly because it had fewer attorneys than Reading or Philadelphia. He could edge out the legal minds in the frontier town and grow his business. Wilson had to wait until 1778, when the British evacuated Philadelphia, to sell his house in Carlisle and move back to the large city.

Back in Philadelphia, he resumed his law practice and took on a large number of cases defending Philadelphia Tories accused of treason for helping the British during the occupation, Huber said.

After the war, in 1787, Wilson was elected as a delegate to the Constitutional Convention where his chief contribution was to maximize the power of central government and to ensure the independence of each branch of government.

Wilson thought his reputation as a lawyer would be enough to earn him the title of the first chief justice of the U.S. Supreme Court. He was passed over by Washington who appointed John Jay to the top post on the bench.

“Wilson’s most influential moment on the court came while he was working as a circuit judge, a duty required of the justices,” the profile on oyez.org reads. “He was one of the first justices to exercise judicial review when he refused to hear a case about a veteran’s pension. He reasoned that this issue was not an issue the courts had jurisdiction over and solidified the separation between the branches of government.”

The profile also said Wilson had a reputation as a “teaching justice, in that his opinions were written as if they were lectures on the theory surrounding the law. His opinions often solidified the parts of the Constitution he had a part in authoring, especially those involved in creating a strong central government.”

In his quest for wealth and power, Wilson got caught up in land profiteering schemes that distracted and drew him away from court. By 1797, his troubles flared up to the point where he shirked his official duties and fled the court to escape creditors.

“The creditors eventually found and charged Wilson, who was imprisoned for nearly $200,000 in debt,” the profile reads. “After he was released from prison, he contracted malaria and died after suffering a stroke.”

History Squared: Key moments in history on the Square in Carlisle

The Square in Carlisle has always been an epicenter of momentous events.

The Gettysburg Anniversary Committee said in a post on its website that after a quarter century of organizing the annual July observance, at this time it "does not anticipate organizing or hosting a 157th re-enactment."

The first day of school 1961 saw a slight increase in enrollment in the Carlisle Area Joint School System.

Haggis, music and more at the 25th annual McLain Celtic festival this weekend

This Day in Cumberland County History for August 12: Nurses needed in polio areas

Sentinel reporter Joseph Cress offers a daily digital glimpse back in Cumberland County history with help from our Newspapers.com archives:

The James Wilson Mansion House hotel was built on the site of the home of a Carlisle attorney who became an associate justice of the U.S. Supreme Court.

This painting shows the Carlisle home of James Wilson, a local attorney who became one of the first associate justices of the U.S. Supreme Court.