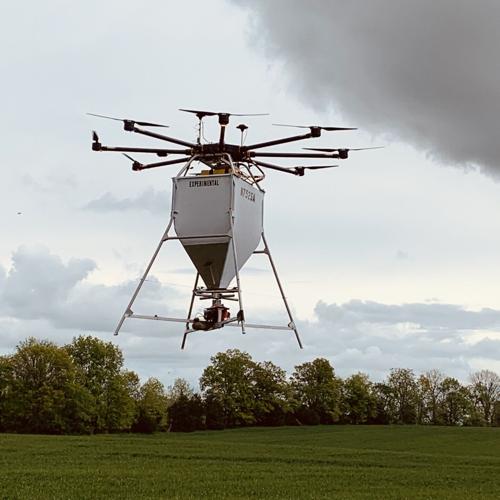 Pictured is a drone operated by William Chain, a partner at Swift Aeroseed LLC. Cumberland County is looking considering a program that would use the drone to spread cover seed on farms. 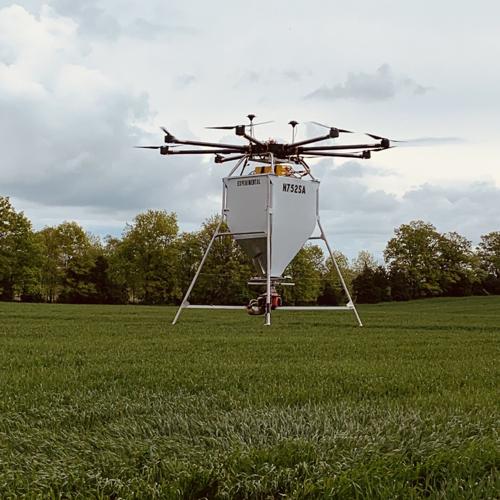 The Cumberland County Conservation District plans a program that would use a drone to spread cover seed on local farms.

William Chain is a partner in Swift Aeroseed LLC, which earned a research grant to test whether seeds spread from a drone can establish a root system to prevent erosion and add nutrients to the soil over the winter.

“We are eager to participate in this with the county,” Chain said. “I know the county is forward thinking. My belief is, in the future, there will be more farmers seeding cover crops. The drone will have a role to play in that.”

Cover crops are hardy plants such as wheat, rye and barley that are used not only as a food source, but also as ground cover to protect the soil from wind and stormwater run-off, said Charles Heberlig III, a technician with the Chesapeake Bay Foundation.

If successful, drones will enable participating farmers to seed their fields earlier in the year – improving the chances of the cover crop getting established in time to reap the benefit, Heberlig said.

“Cover crops are normally planted after corn is taken off for silage,” District Director Carl Goshorn said. “There is no vegetation left in the field. That’s why a cover crop is planted.”

One goal of the research is to determine whether cover crop seeds spread from the drone can germinate in fields already occupied by corn and soybean plants so that there is a head start in the level of growth.

“The drone replicates what is being done with airplanes in the Midwest and, to some extent, the eastern shore of Maryland,” Chain said. “The method is to get a cover crop growing before the cash crop is harvested.”

Drones and Districts: The sky's the limit on drones in education, a local teacher says

If timed properly, the cover crop plants are sprouting close to the ground just as the larger plants are ready to be removed. The idea is to overlap the growth cycle to increase the level of nutrients in the soil.

“Where we can broadcast this early, we are able to put down a multispecies seed mix that creates a more nutritious benefit to the soil,” Chain said. The drone is a safer, more practical alternative to airplanes especially in Pennsylvania where farms tend to be bordered by stands of trees or located close to residential developments, he said.

“There are a lot of good benefits, but we don’t know how well it [cover crop seeds] will grow,” Goshorn said.

Drones and Districts: School districts are in different stages when it comes to drone policy

Using parts imported from China, Swift Aeroseed invented an octocopter prototype capable of carrying about 70 pounds of seed in a hopper, Chain said. The design includes a valve operated by motors that feed a spreader that can distribute seed in a 60-foot swath. The drone is programmed to fly a pre-set course and has safeguards in place to stay within a set area and to land in an emergency.

“It flies at 12-miles-per-hour about 20 feet off the ground,” Chain said. “It’s able to seed one acre per minute. The operators must have the drone within sight the whole time.”

For every test of the drone and its systems, there will be a flight crew of at least two specialists as required by the Federal Aviation Administration, Chain said. One person will keep an eye on the drone while the other person will have continual access to its flight controls, he said.

The Conservation District plans to identify farmers willing to participate in the pilot program, Goshorn said. Use of the drone could help farmers save time and money in fuel costs and equipment maintenance, he said.

The pilot program could begin as early as mid- to late September, Goshorn said. Cumberland County, with its cost-sharing program, is already a leader in promoting the planting of cover crops among local farmers, he said.

A subdivision of state government, the conservation district is staffed by county employees who run programs that offer technical assistance to farmers on best practices, inspect and monitor earth-moving activities at construction sites, offer environmental education to local school districts and sell tree seedlings and rain barrels to protect the natural resources of Cumberland County.

Next frontier for drones is flying out of sight

For years, there's been one cardinal rule for flying civilian drones: Keep them within your line of sight. And not just because it's a good id…

RAW: WORLD CUP: AMERICAN FANS IN QATAR REACT TO THE NETHERLANDS VICTORY OVER US

RAW: WORLD CUP: AMERICAN FANS IN QATAR REACT TO THE NETHERLANDS VICTORY OVER US

Behind the Scenes - At the World Cup media hub

Behind the Scenes - At the World Cup media hub

Pictured is a drone operated by William Chain, a partner at Swift Aeroseed LLC. Cumberland County is looking considering a program that would use the drone to spread cover seed on farms.

The Cumberland County Conservation District plans a program that would use a drone to spread cover seed on local farms.