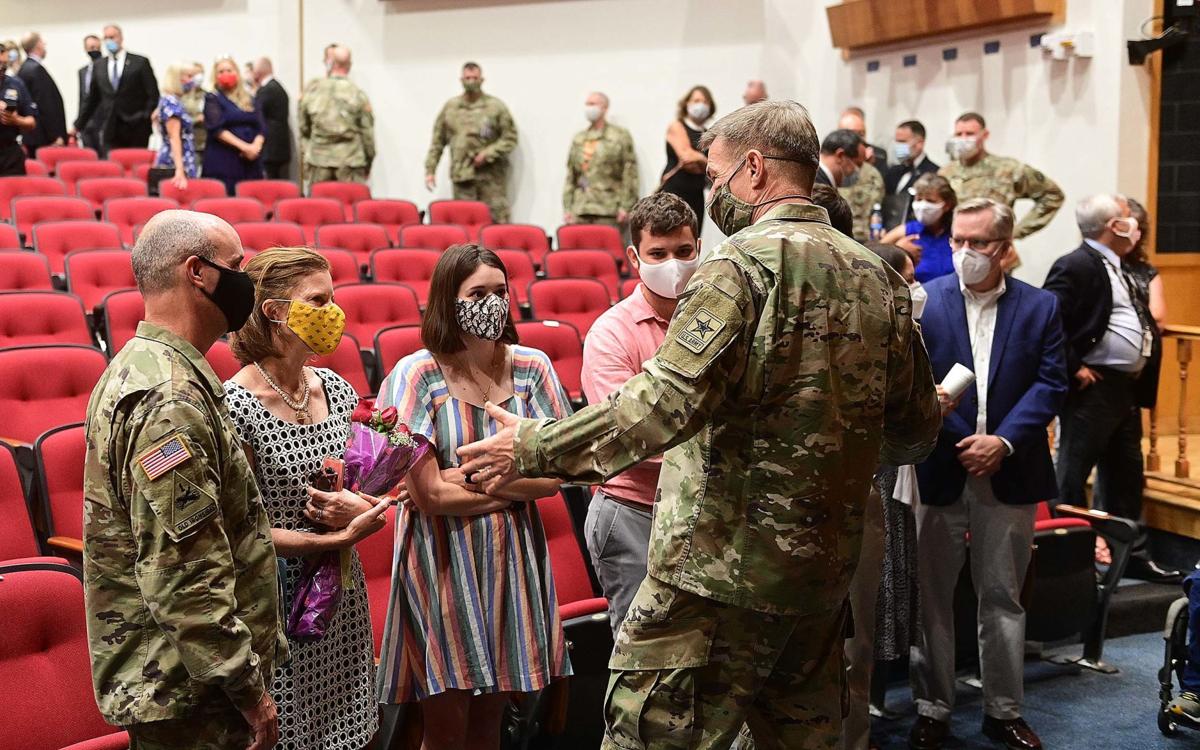 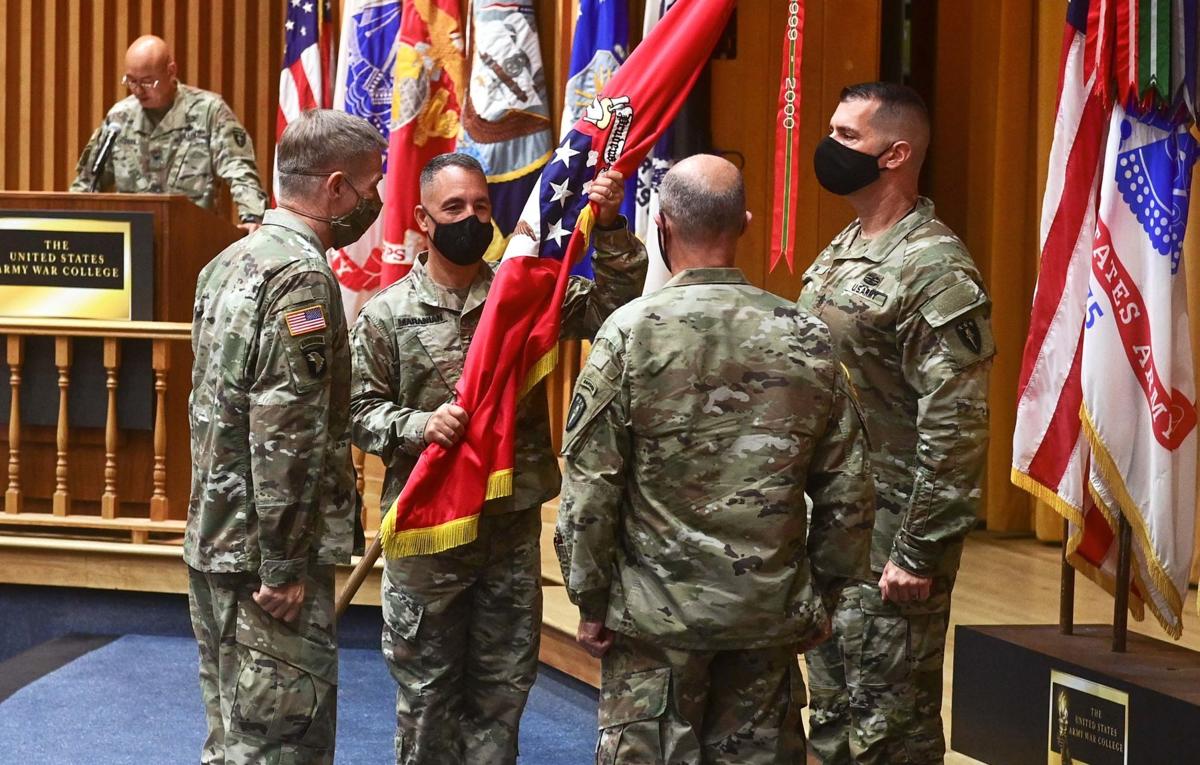 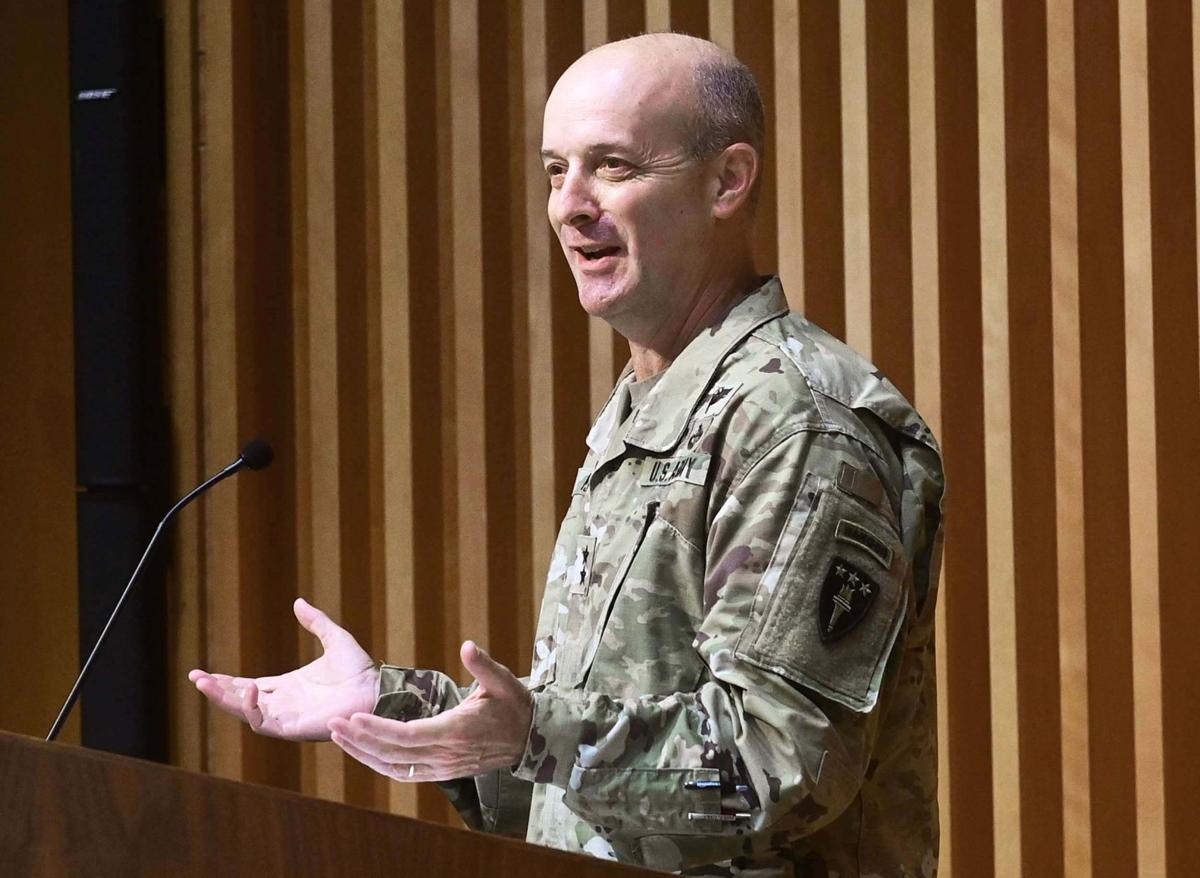 Outgoing Commandant Maj. Gen. John S. Kem thanks everyone for their support and work during his time at the U.S. Army War College Thursday morning during a change of command ceremony. 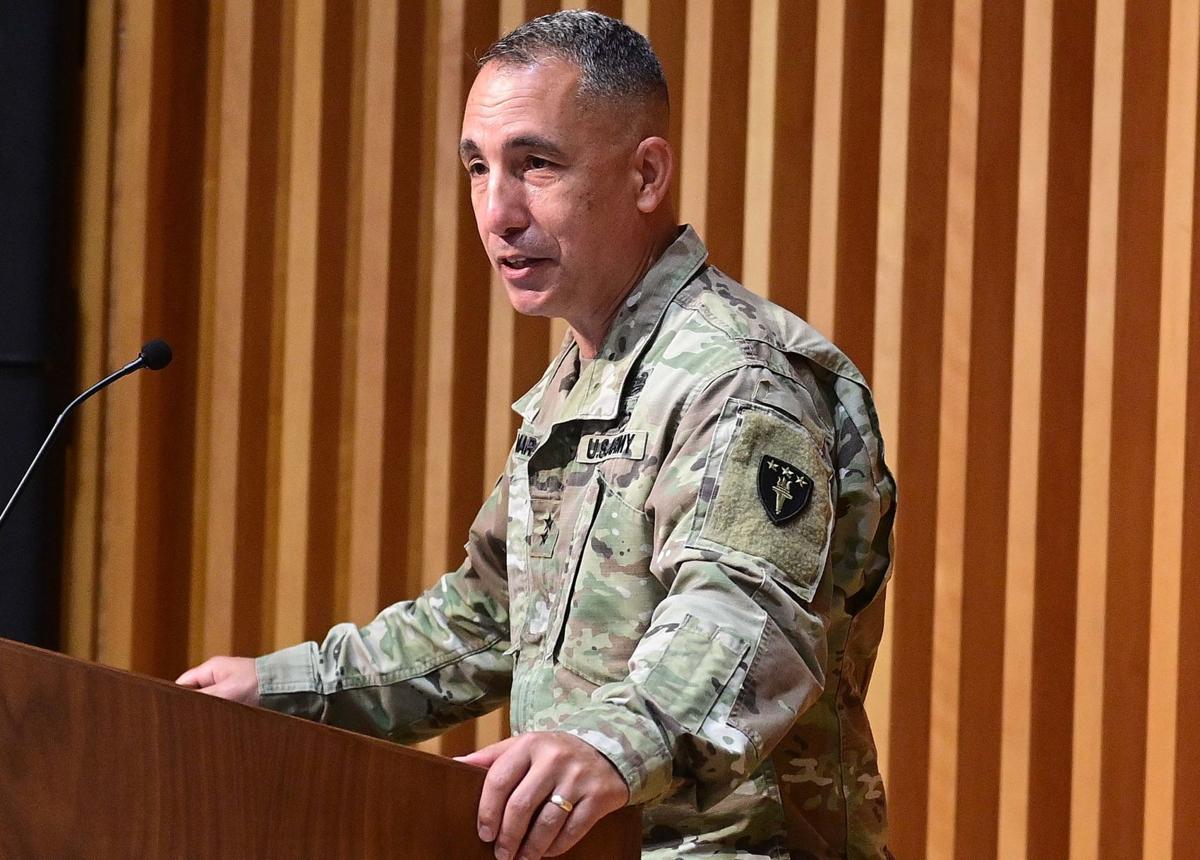 When Maj. Gen. John Kem started his military career, he was a new lieutenant, fresh out of the academy, stationed in West Germany during the Cold War.

“I had a platoon of engineers,” Kem said. “We had a plan if needed to lay minefields and breach obstacles if the Soviets attacked.” Though danger loomed, the assault never came and this Army brat turned career officer worked his way up the ranks.

Thirty-five years later, Kem is poised on the edge again, this time between a military and civilian life. At age 57, he stepped down Thursday from his post as commander of Carlisle Barracks and the Army War College. His next stop is retirement in Annandale, Virginia, and the prospect of a job in engineering or senior business management.

A lot has changed, and not always for the better. When Kem started, borders were easier to distinguish, companies were less global and economies were less interconnected.

“Nowadays, the complexity across the world is so much more difficult,” Kem said. “The internet and all these things have changed the risk calculus. It’s hard to understand what may be a real threat versus a server problem. The data flowing at us is overwhelming. Some of it is spoofed. Some of it is real. Some of it is being manipulated. How do we use that to inform decision making?”

Stories of Honor: Help us salute those who served

There are givens that remain. Then as now, there are people who pursue disorder both inside and outside the U.S. “That’s just part of the challenge of a global world,” Kem said. The Army has also been a constant, drawing strength from a cross-section of America, he said.

“It has always been about taking people off the street,” Kem said. “We all come in with baggage. The Army takes whoever you are and does a good job in putting together a great organization.”

Army War College has precautions in place to address COVID-19

Three years ago, Kem took charge of Carlisle Barracks and the Army War College. Prior to that, he served as the first provost of the Army University and deputy commandant of the Command and General Staff College. Looking back, Carlisle gave Kem the opportunity to further develop his skills in adaptive problem solving.

The largest of all the war colleges, Carlisle hosts senior leaders from all the military service branches and several federal agencies, Kem said. They are taught by distinguished professors in such fields as national security, military strategy and leadership, he said. Whether through the resident or distance learning program, the result is a master’s level degree in strategic studies.

The enthusiasm of the students and the forward thinking of the professors becomes a package that merges the past, present and future with the history stored at the Army Heritage and Education Center, Kem said. During his watch at Carlisle Barracks, progress was made on the plan to build a new academic building.

The current building, Root Hall, dates from 1967 and is not adaptable to modern teaching methods. Its systems are obsolete and its seminar rooms are too small. The design of the new building will incorporate state-of-the-art features drawn from tours of recently completed corporate and academic buildings.

In the decades to come, the replacement for Root Hall will match the complexity of the world with technology and infrastructure that encourages collaboration and innovation among Army War College students, Kem said. “We are at the senior level. If it was an easy decision, an easy problem, it already got fixed. At the national level, there are only hard problems. How do you think through those problems? It takes research and data collection.”

New academic building could be coming to Carlisle Barracks

During his three years in Carlisle, Kem and his staff have developed academic partnerships with Dickinson College, Penn State Harrisburg, Carnegie Mellon University in Pittsburgh and other Pennsylvania colleges. His team has also worked to strengthen community support linked to the success of students and faculty.

About 380 students are enrolled each year in the 12-month resident program. Roughly half live on post with most of the rest centered in the Carlisle area. The typical class includes about 80 international fellows, senior military officers from countries allied with or friendly to the U.S.

All the fellows live off-campus and many bring their families who settle in the community and local school system. As commandant, Kem has seen the benefits of this interaction. He recalled, in particular, the case of an officer from the Middle East who had a 7-year-old daughter with physical and mental challenges. Like other special needs students, the girl was mainstreamed into the regular classroom.

“She had never walked before she got here,” Kem said. “They got her to where she could walk like a toddler with support. She never spoke well, but communicated more effectively. She could read sentences by pointing to the essential words. That was not the Army. It was the people in this area. And that was kind of cool.”

This annual influx of War College students brings not only the children of international fellows, but American children born into military families who have experienced life in other countries and parts of the U.S. Local school districts have tapped into this diversity as teachable moments in the classroom.

For Kem, some of his fondest memories of Carlisle stem from the graduation ceremonies held every summer. It was satisfying to see career officers advance to the next level and become the future senior leaders of the U.S. military. “Watching the excitement they have to go back out and serve,” Kem said. “That was the inspiring part. I played a really small part of that. I was the head of the organization.”

Army War College has precautions in place to address COVID-19

As a precaution against the spread of COVID-19, the Army War College at Carlisle Barracks will require all of its students to test for the disease within two weeks of their arrival in the Carlisle area.

Outgoing Commandant Maj. Gen. John S. Kem thanks everyone for their support and work during his time at the U.S. Army War College Thursday morning during a change of command ceremony. 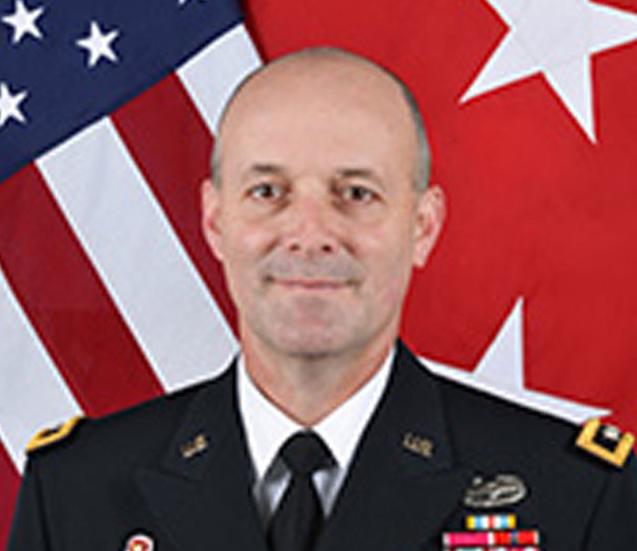