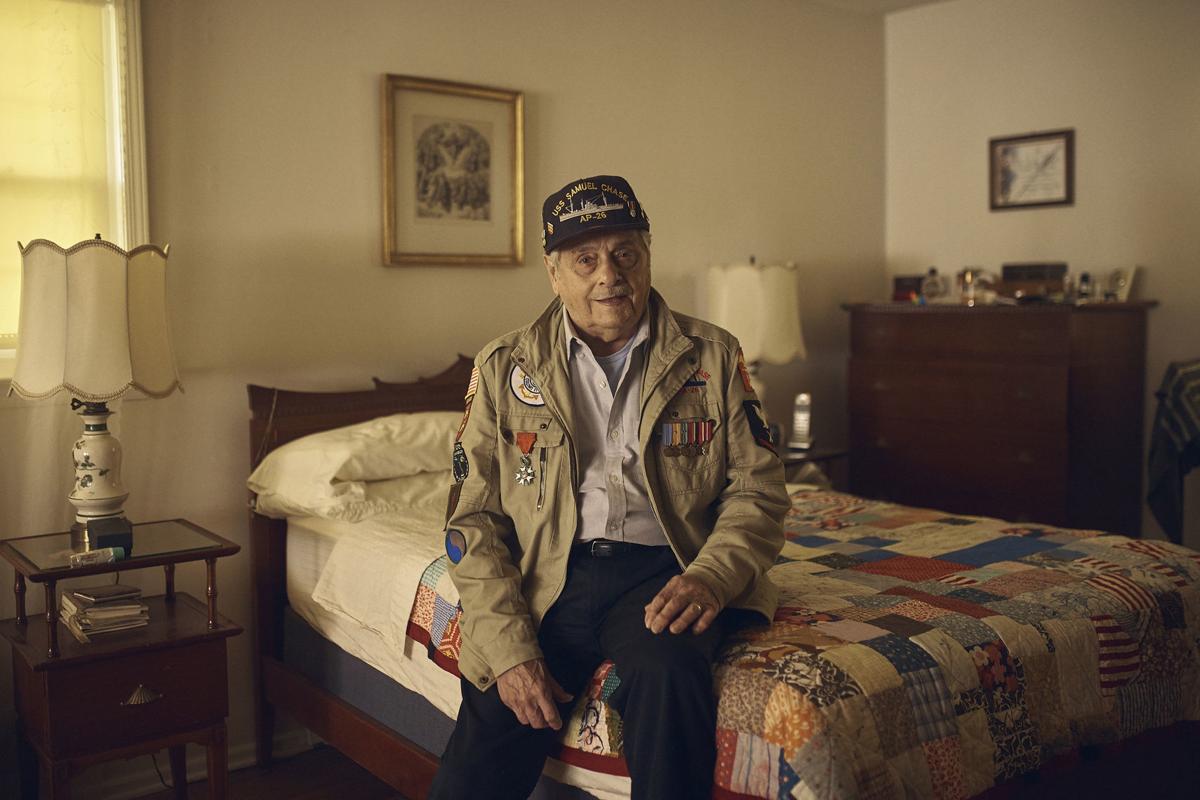 World War II U.S. veteran Frank DeVita, who took part in the D-Day battle, plans to make his 12th trip back to Normandy this June. He likes to bring people with him so they’ll know what happened there. 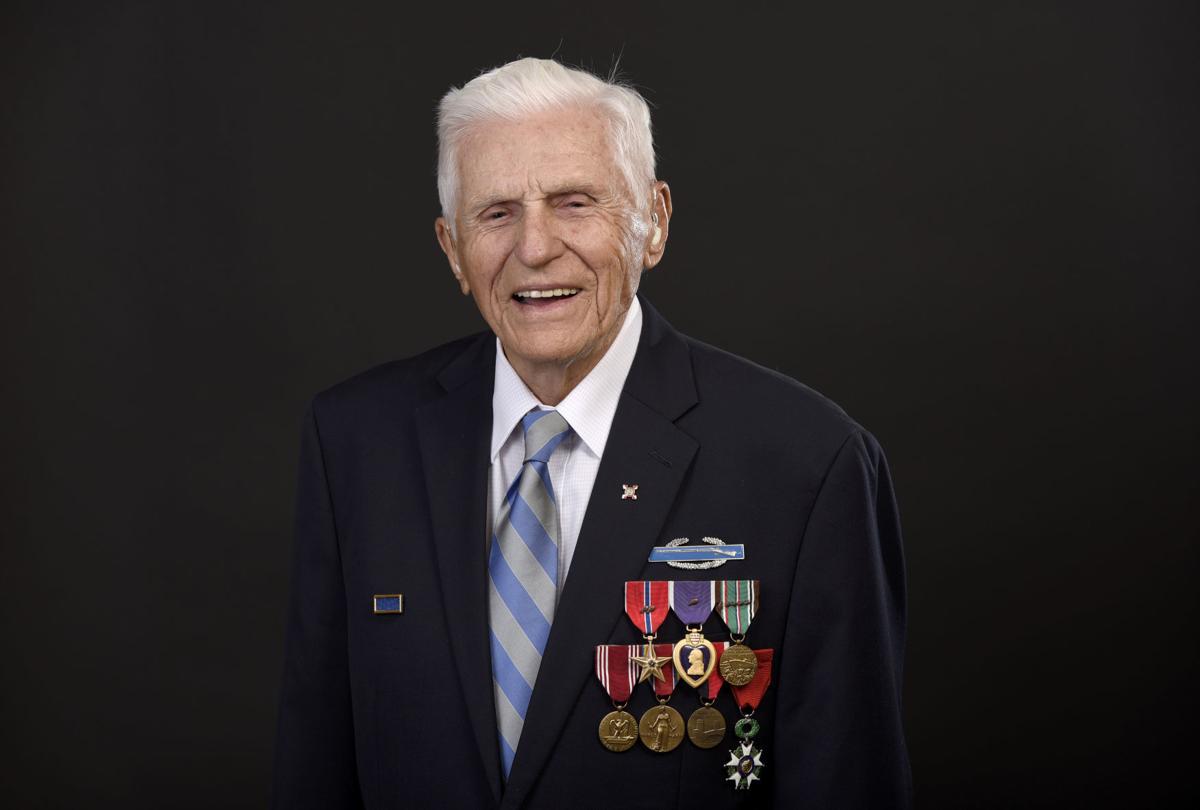 Steve Melnikoff, who came ashore at Normandy, France on D-Day-plus-1, June 7, 1944, with the 175th Regiment of the 29th Infantry Division, was part of the bloody campaign to capture the French town of Saint-Lo through fields marked by thick hedgerows that provided perfect cover for German troops. 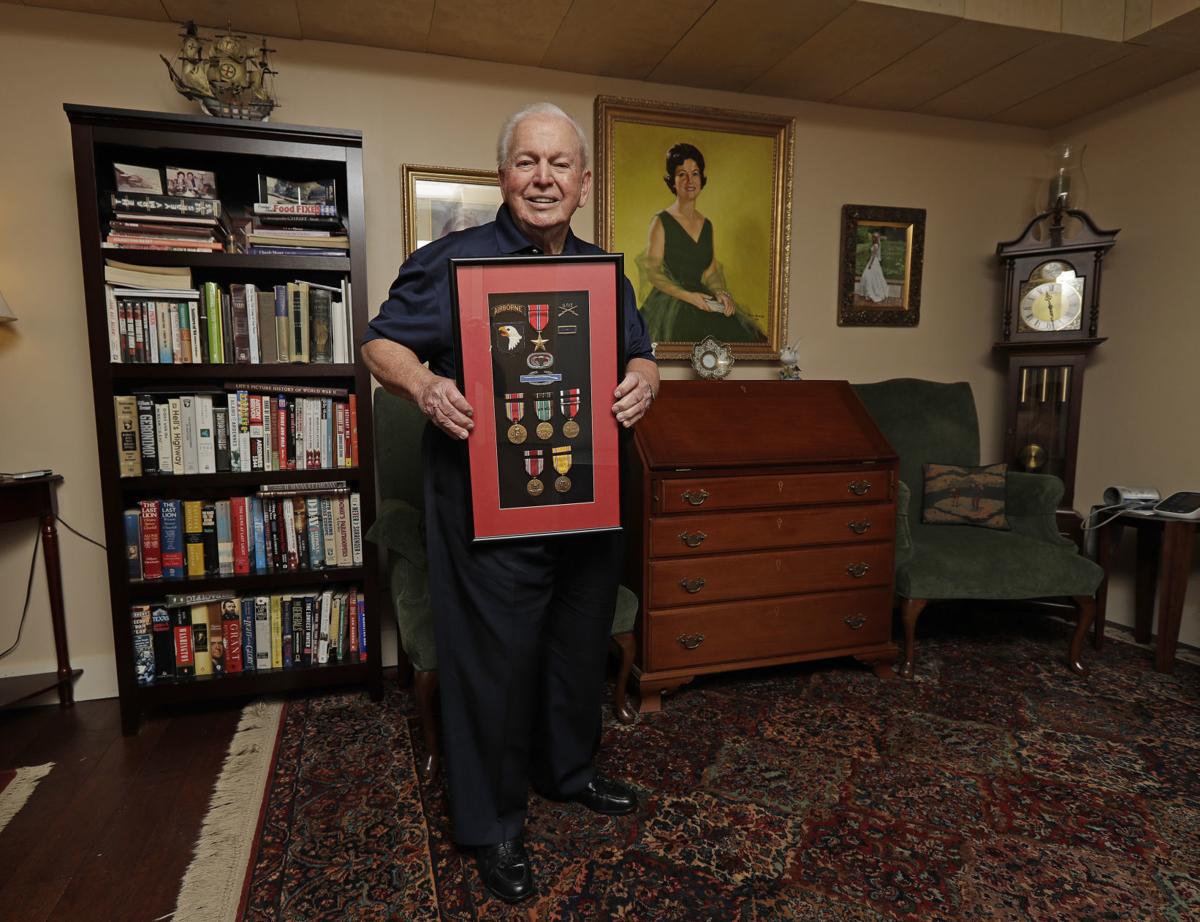 As the wave of troops sailed toward Omaha Beach in the early morning of June 6, 1944, Frank DeVita could hear the German machine gun fire striking the outside of his landing craft . His job was to lower the ramp when the craft got to the beach and then raise it after the American troops clamored out.

But the ramp was DeVita’s shield, protecting him and the other men inside from all those bullets raining down. The coxswain screamed at him to lower the ramp, but with the roar of the cannons and the craft’s diesel engines, DeVita couldn’t hear him.

“I froze. I was so scared because I knew when I dropped that ramp the bullets that were hitting the ramp were going to come into the boat and I’d probably be dead in five minutes,” he said, speaking from his New Jersey home.

But when the coxswain screamed again, DeVita dropped the ramp, and he estimates 14 to 15 troops were immediately felled by machine gun fire.

Nearly 75 years have passed since that day when DeVita and his Coast Guard crew took wave after wave of American troops onto Omaha Beach. Like many D-Day survivors, he didn’t talk about these things for decades. But now, as the number of troops who fought there and can speak about their experiences firsthand is reduced daily, he feels the need to share these experiences so that people understand the sacrifices made at Normandy.

Vincent Corsini, 94, was one of the soldiers ferried to the beach that day. There had been a number of false starts ahead of the invasion of Normandy. But he knew June 6 was different. There was a certain feeling in the air — an “edge,” as he describes it.

Speaking from his North Carolina retirement community, he remembers D-Day. Machine guns splattering the water as he unloaded. The weight of the 60 mm mortars he carried.

At one point, over the din of heavy artillery, he heard someone yelling for help from the water. Taking off as much of his equipment as he could, he left his position at the foot of the hill at Omaha Beach and ran back to the waves to find a stranded officer.

“As I was standing there looking at him somebody up on the hill pulled the trigger,” he said. The bullet narrowly missed his ear, feeling like a “sonic boom,” as it passed. Corsini grabbed the officer and pulled him to safety, never knowing what happened to him.

Before D-Day, many of the troops had trained intensely but never seen combat.

Dennis Trudeau was a 19-year-old Canadian paratrooper. He remembers how the paratroopers joked on the tarmac on June 5 about how they’d be in Paris by Christmas. But when they climbed into the plane, the chatter stopped. Hours later a good friend in the unit was killed by friendly fire when an Air Force bomb intended for the Germans hit the Canadians instead.

Choking up, Trudeau recalls how his friend kept calling out for his mother as he died.

Within hours, combat would be largely over for Trudeau as well when he was captured by German forces. He spent the rest of the war in a prisoner-of-war camp.

Some D-Day veterans have gone back to Normandy repeatedly while for others like 94-year-old Eugene Deibler, it will be their first time. He’s a bit surprised at the attention the anniversary is receiving now but worries that with time people will forget.

That’s why Steve Melnikoff, 99, talks about his experiences.

When he landed on Omaha Beach on D-Day-plus-1 — June 7, 1944 — victory was far from secure. His unit was part of the bloody campaign to capture the French town of Saint-Lo through fields marked by thick hedgerows that provided perfect cover for German troops.

He remembers one particular battle for Hill 108 — dubbed Purple Heart Hill — for its ferocity. The Germans had shot and killed his friend, and about an hour later, he too was shot. As he went down, he looked to the side and saw his lieutenant also come under fire.

“He’s being hit by the same automatic fire, just standing there taking all these hits. And when the machine gun stopped firing he just hit the ground. He was gone,” Melnikoff said.

This year, he’ll go back to the American cemetery at Colleville-sur-Mer where nearly 9,380 American troops are buried. Among the fields of white crosses, he’ll pay his respects. Out there, he says, is someone who likely took a bullet meant for him. Out there are the heroes.

“I have to go there and just be thankful,” he said.

World War II U.S. veteran Frank DeVita, who took part in the D-Day battle, plans to make his 12th trip back to Normandy this June. He likes to bring people with him so they’ll know what happened there.

Steve Melnikoff, who came ashore at Normandy, France on D-Day-plus-1, June 7, 1944, with the 175th Regiment of the 29th Infantry Division, was part of the bloody campaign to capture the French town of Saint-Lo through fields marked by thick hedgerows that provided perfect cover for German troops.