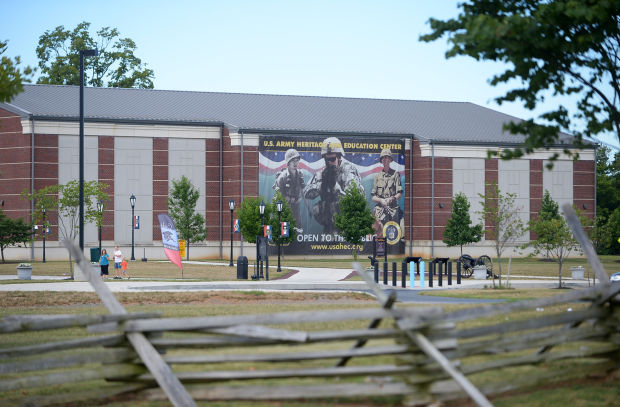 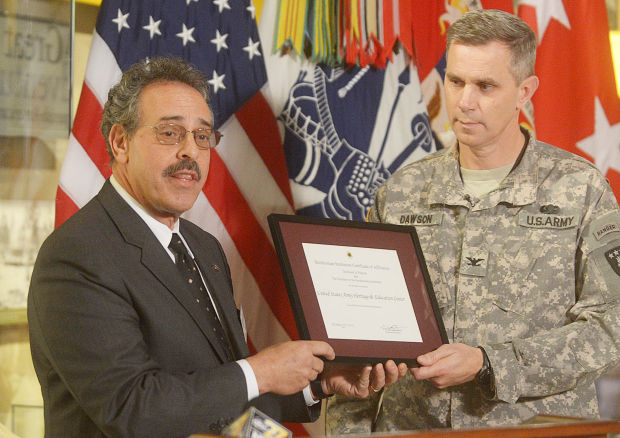 Director of Smithsonian Affiliates Harold Closter, left, andCOL. Matt Dawson formally mark the partnership during a ceremony at AHEC Wednesday in the Visitor and Education Center.

MIDDLESEX TWP. — The Army Heritage and Education Center was officially named a Smithsonian Institution Affiliate Wednesday opening doors to opportunities to broaden tourism and share resources with a nationwide network.

“We look forward to a great partnership,” said Col. Matt Dawson, director of AHEC, which is the first U.S. Army museum or historical organization to join the select group of museums, educational and cultural institutions.

“We have much to learn as we break ground for the Army, but we know this partnership will make us better across all disciplines — archive, library, museum, outreach and programs,” Dawson added.

He said the affiliate status gives AHEC access to a network of member organizations that can share resources, exchange artifacts, collaborate together on programs or projects and learn from one another.

AHEC staff would also be able to attend an annual conference and enroll in professional development opportunities, Dawson said. He added AHEC is in the early stages of talks with the Smithsonian to arrange for the loan of artifacts associated with Benjamin O. Davis, the first Black general in the U.S. Army.

The goal would be to put the artifacts on exhibit in the National Museum of African American History and Culture currently under construction in the Mall in Washington, D.C., and set to open in 2015, said Jennifer Brundage, a national outreach manager for the Smithsonian Institution.

AHEC first reached out to the Smithsonian several months ago with interest in participating in the affiliates program, Dawson said. To be eligible, staff had to submit the proper paperwork and open the facility to a site visit by Brundage, who then went before a committee that weighed the merits of the application against the affiliation standards set by the Smithsonian.

“What we look for is the capacity to partner with the Smithsonian,” Brundage said. “Can we share collections, expertise and scholarship? Can we work together to advance educational programs? In every way, AHEC is an ideal partner.”

She said in the past, affiliates have conducted conservation work on Smithsonian artifacts. AHEC has a state-of-the-art conservation facility on its campus that rivals that of the Smithsonian, Brundage said.

She added the next step will be for AHEC staff members to visit the Smithsonian in Washington, D.C., and meet with key curators in its armed services division. “The breadth of the affiliation and what is possible is only limited by what we can imagine together,” Brundage said.

Dawson accepted an affiliation certificate Wednesday from Harold Closter, director of Smithsonian Affiliates. The brief ceremony was held in the museum gallery of AHEC and was attended by staff members and volunteers.

Shireen Farr was there as the chief operating officer of the Cumberland Area Economic Development Corporation, which is the parent agency of the Cumberland Valley Visitors Bureau of which she is tourism director.

“From a marketing perspective, it is a great resource to tie the U.S. Army and the AHEC brand to an institution such as the Smithsonian,” Farr said. “It elevates this facility to a broader audience. It puts it on more of a national radar.”

Farr said this affiliation with the Smithsonian will create a loop that would increase visitation and demand which in turn would step up the progress of growing the AHEC campus.

This recognition by the Smithsonian validates the quality of AHEC as a facility and may help us gain access to potential donors, said Mike Perry, executive director of the Army Heritage Center Foundation.

“It was abundantly clear to us that what AHEC is doing is at the highest level of museum work,” Closter said. “That is why the Smithsonian is so proud to begin this partnership.”

Closter explained that in a way, coming to Carlisle was like a spiritual homecoming for the Smithsonian. It was here in 1850 that Dickinson College professor Spencer Fullerton Baird was recruited to be the first curator of the Smithsonian Institution.

A renowned naturalist, Baird went on to become the second secretary of the Smithsonian who made the institution into the national museum of the United States.

“Our history with the U.S. Army is in itself a long and rich one that goes back to the earliest days,” Closter said. He added that many of the Army expeditions that were sent out to explore the interior and map the Southwest border included Smithsonian scientists who collected information and specimens.

“Some of the true treasures of the Smithsonian come directly from the U.S. Army and relate to the military heritage of our country,” Closter said. He cited as an example the Star Spangled Banner, the U.S. Army flag that flew over Fort McHenry in Baltimore and inspired Francis Scott Key to write the national anthem.

“With this history behind us and with this partnership that has evolved over more than 170 years, it makes absolute perfect sense to make a partnership here with AHEC,” Closter said. “It will help us to reach out to the American people wherever they are in their own community.”

Since 1996, Smithsonian Affiliations has established partnerships with more than 180 museums and cultural institutions in 43 states, Puerto Rico and Panama.

The Army Heritage and Education Center in Middlesex Township officially became a Smithsonian Institution affiliate organization during a brief ceremony this afternoon.

AHEC is the first U.S. Army museum or historical organization to join this select group of museums and cultural institutions.

Being an affiliate opens opportunity for AHEC and its staff to share artifacts and other resources with other affiliates within the network, said Col. Matt Dawson, AHEC director.

Director of Smithsonian Affiliates Harold Closter, left, andCOL. Matt Dawson formally mark the partnership during a ceremony at AHEC Wednesday in the Visitor and Education Center.