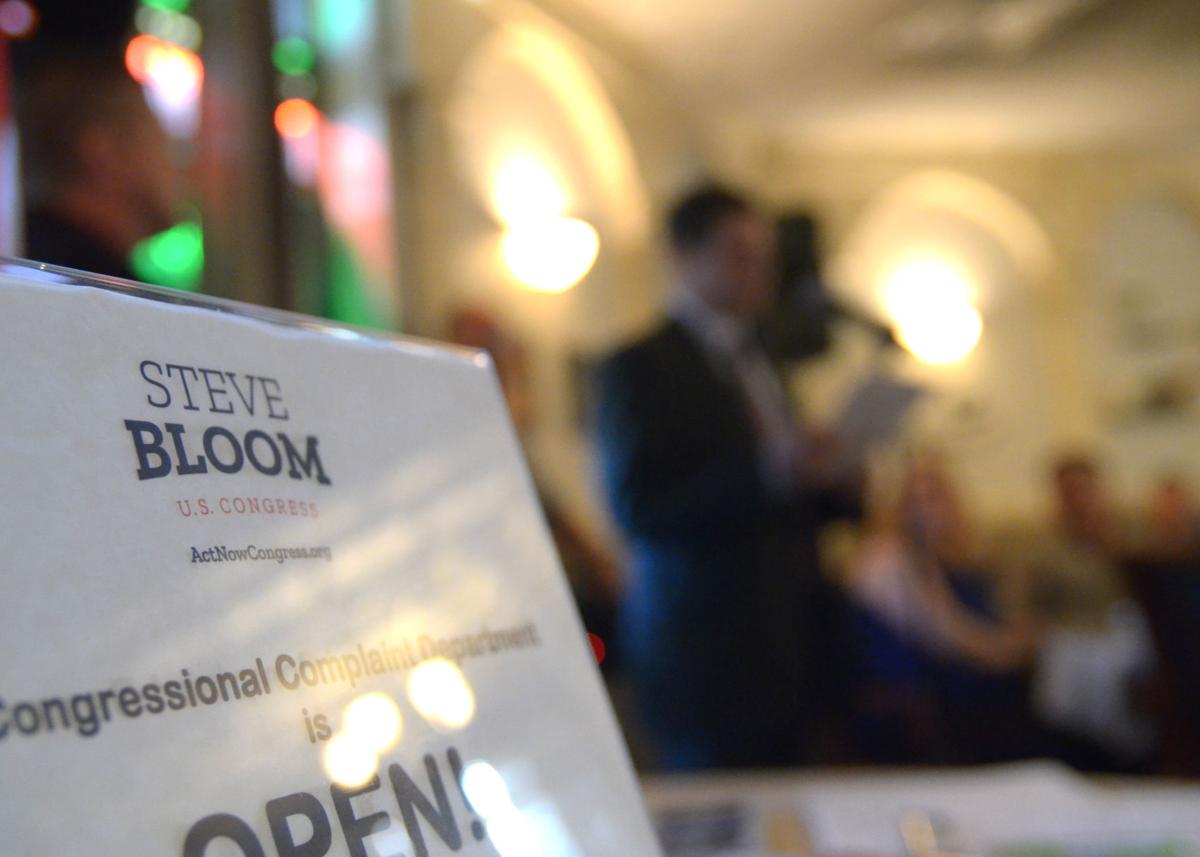 Pennsylvania Rep. Stephen Bloom, R-North Middleton Township, kicks off his campaign for a congressional seat during an event in September. 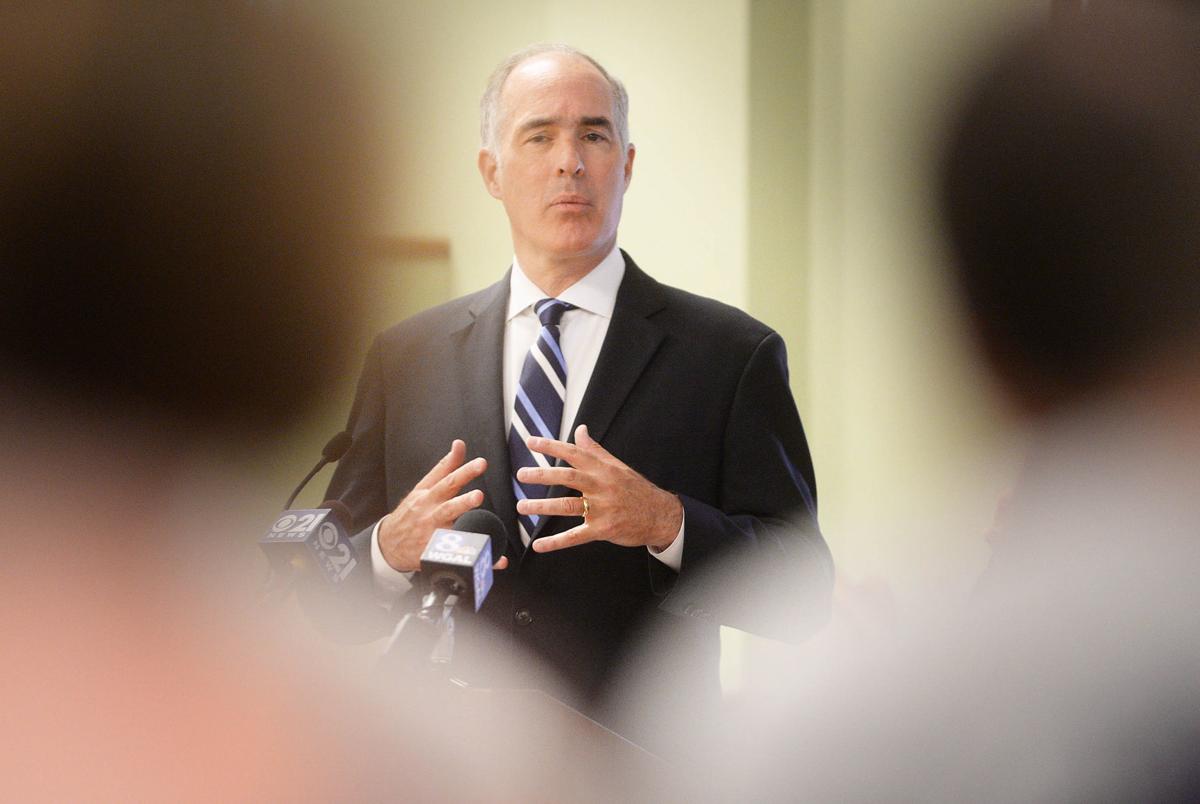 Next year may go down locally as a prime example of how a progression of open seats will make for a more compelling May primary than a November general election.

“You often see this chain effect of everyone climbing a ladder,” said Sarah Niebler, an assistant professor of political science at Dickinson College. “What is interesting is you are seeing all of it take place in Cumberland County.”

Republican Congressman Lou Barletta made it clear he would vacate his 11th District seat when he announced his run for the U.S. Senate opposite Democratic incumbent Bob Casey Jr.

That vacancy created an opening for Republican state Rep. Stephen Bloom to announce his campaign for Congress, and he will not campaign for his 199th District seat.

With Bloom moving on, the field is open for Republicans and Democrats to vie for a state seat that for years has been a GOP stronghold. But so far only Barb Gleim, a former Cumberland Valley School Board president, has announced her run for the Republican nomination for the seat.

Niebler suspects more candidates will declare after Jan. 1 because “you don’t want to wait until the 11th hour.” Her area of expertise is the study of how public opinion shapes campaigns and elections.

“The smaller the district, the less important it is to declare early because the fundraising concerns are not as great,” Niebler said. Not as much money is needed to be competitive in a state legislative district race.

In contrast, Barletta and Bloom had to announce early because more funds are needed to build name recognition across a broader geographic area. Both men face challengers for the GOP nomination.

Bloom especially has his work cut out for him. He is from the southern portion of a diagonally shaped congressional district that runs from almost the New York state line to about 20 miles from the Maryland border. The 11th District is often cited by critics as a prime example of partisan gerrymandering.

Though well-known in Cumberland County, Bloom will need to spend a lot of time over the next four months traveling the Interstate 81 corridor to try and draw the notice of voters and media elsewhere in the district.

“His challenge will be mainly logistics,” Niebler said. She said Bloom and the other candidates for the Republican nomination will also be working hard to secure endorsements, which act as a shortcut in establishing trust among voters when name recognition is hard to establish. Here, a nod from Barletta would be useful, but the congressman may opt to stay out of the primary.

“Clearly, the primary will be the big thing for Bloom,” Niebler said. “When it comes to Barletta’s seat in the general election, the Republicans have a distinct advantage because of the conservative nature of the [11th] district.”

A number of Republicans are also looking to take Casey’s Senate seat. Among those who have announced their intention to seek the Republican nomination are Barletta, Paul Addis, Cynthia Ayers, state Rep. Jim Christiana (15th district), Paul DeLong, Bobby Lawrence and Joseph Vodvarka, who previously ran for Senate seats in Pennsylvania as a Democrat. Libertarian Dale Kerns has also announced his campaign for the Senate seat.

All 435 seats in the U.S. House of Representatives will be up for grabs in the 2018 midterm elections in November. There are 239 Republicans, 193 Democrats and three vacancies.

Historically, the party that is out of power gains seats in the midterms, Niebler said. “The question is how many seats will they [the Democrats] gain and will it be enough to take the House.”

Democrats would need to gain 50 seats in the chamber to take control over the leadership of committees and the legislative agenda.

Another thing working in favor of the Democrats is the tendency of the party not controlling the presidency to gain seats in the midterm elections. “The predominant theory is Americans don’t like one-party control,” said Niebler, adding that it makes voters nervous so they tend to make adjustments.

Early in 2017, most experts thought the U.S. House would remain in Republican control after the midterm elections, Niebler said. But significant Democratic wins in special elections over the past six months have some people speculating the House may be in play. Part of this is due to the historically low approval ratings of President Donald Trump.

The resources of both parties are finite in terms of money, time and volunteers. No doubt both the Republican and Democratic national committees are studying every available seat to decide how to best allocate supplemental resources toward races with the best chance of success.

“The Republicans have to feel optimistic about holding onto the Pennsylvania 11th,” Niebler said. “Barletta’s seat is pretty reliably a Republican district. You’re signing up for an uphill battle if you’re the Democrat.”

There are other congressional districts across the country and state that are more likely to flip to the Democrats than the Pennsylvania’s 11th District, she said.

But in this election cycle, there are no incumbents running in either the 11th Congressional District or the 199th State Legislative District. Since both are known Republican strongholds, there will probably be a slate of candidates vying for the GOP nomination and every candidate, including Bloom, would have to find a way to stand out. This could make the May primary more compelling than the general election.

Voters will likely see the same level of competitiveness among Republicans vying for the party nomination for the U.S. Senate seat held by Democrat Bob Casey Jr.

Thirty-three of the 100 Senate seats will be up for grabs in the 2018 general election. Of which, about 23 are held by Democrats.

Ten of these Democratic senators represent states that sided with Trump in the 2016 general election. This includes Pennsylvania and Casey. “He is somewhat vulnerable,” Niebler said. “But I don’t think he is in the top tier of the most vulnerable Democrats in the Senate.”

Historically, Pennsylvanians tend to elect presidents of one party and senators of the other party, Niebler said. She said there is also the tendency to split the Senate vote by having one senator from each party.

In the primary, Barletta may enjoy an advantage over his Republican opponents because he has Trump’s endorsement, Niebler said. She believes the president is popular among most Republicans and Barletta could use the endorsement as a way to set himself apart.

But the impact of that endorsement may depend on what Trump does in the months between the May primary and November general election.

In December, Trump endorsed the controversial Roy Moore as the Republican candidate for the U.S. Senate during a special election in Alabama. Moore lost to Democrat Doug Jones.

“But Moore is not Barletta,” Niebler said, referring to allegations of misconduct by the Alabama candidate. “Moore had a host of other baggage. Barletta is much more of a traditional Republican candidate.”

She said, however, Democrats have a much better chance of taking over the U.S. Senate in the midterm election. There are 51 Republicans, 47 Democrats and two independent senators who tend to caucus with the Democrats.

Looking Ahead: The issues Cumberland County will face in 2018

The Sentinel takes a look at some of the big issues and changes in store for Cumberland County in 2018.

Pennsylvania Rep. Stephen Bloom, R-North Middleton Township, kicks off his campaign for a congressional seat during an event in September.