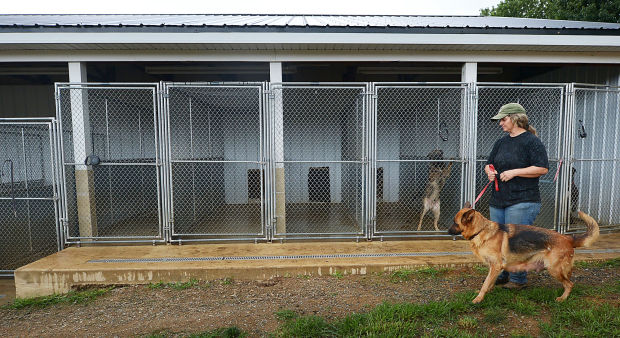 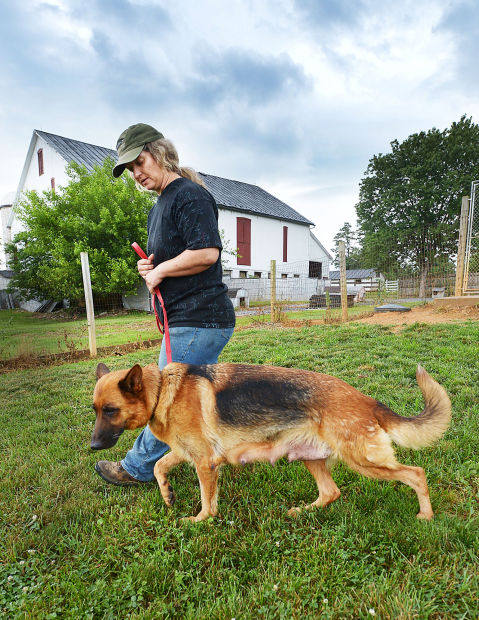 Ritner Kennel owner, Molly Graf has had numerous citations from West Pennsboro Township due to the dogs barking so much. German Sheperd puppies shown at the kennel. 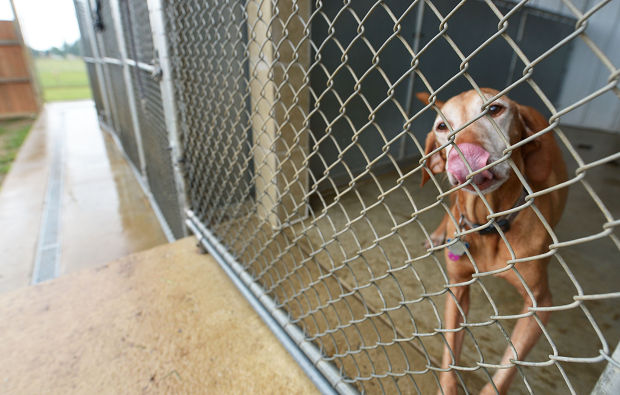 By Travis Kellar, The Sentinel

WEST PENNSBORO TWP. — “I’ve been fighting the government, the township who’s been trying to chase me out,” said Molly Graf, owner of Ritner Kennel. “They have succeeded.”

Graf is leaving West Pennsboro Township after a three-year struggle with township officials, centered on dogs barking at her kennel.

Her kennel, located at 3581 Ritner Highway, has been in the township for about 10 years. When she first bought the property under the proposal that it would be a kennel, both the board of supervisors and zoning board approved the plan for the agricultural zoned plot of land.

Her attorney, Christopher Lucas, said the township granted Graf a conditional use permit in 1993 to build and operate the kennel.

The barking, however, became a problem.

Graf said neighbors moved in across from her property a few years after the kennel was opened. She said her new neighbors began to complain about the barking.

The township passed its first barking ordinance in 2006. It made it unlawful for residents to have a dog that “disturbs the peace by barking” between 7 a.m. and 7 p.m. for a period of less than an hour, but more than a half-hour.

The updated ordinance from 2011 specifies what constitutes “unreasonable barking or other noise making by dogs.” That is identified as two periods of noise that is in excess of 15 minutes within 24 hours of one another. It is further identified as noise that “interferes with or deprives any person of the peace, quiet, rest, sleep or legitimate enjoyment of their property.”

That ordinance put Graf between a rock and a hard place.

“I cannot comply with that barking ordinance,” Graf said, noting that she has 40 to 50 dogs on site at any given time. “If you have dogs, they’re going to bark, and I can’t comply with it.”

She was soon cited due to the 2011 barking ordinance. She said one of the initial complaints came from a resident from Penn Township — Ritner Highway splits West Pennsboro and Penn townships where Graf’s kennel is located. That complaint was promptly struck down by a judge, but soon after, she received additional citations.

She said she has lost court cases on each one.

West Pennsboro resident and neighbor Timothy Kennedy testified to the dogs’ barking. Kennedy said he has lived across the kennel for about six years. He presented a calendar with numerous dates in which the dogs barked excessively. Kennedy called the barking “continuous” and could be heard inside his home.

“It’s really distracting,” Kennedy said. “When we have company over, they always remark at the barking of the dogs.”

Shears also provided testimony at the hearing. He provided his own calendar of occurrences when the dogs barked. Shears said he went to the kennel on different instances. He sat in a neighboring driveway to observe the dogs barking. One evening, the dogs allegedly barked from 9:30 p.m. to 9:50 p.m. He even said he heard the dogs from his own residence almost a mile away.

Gilroy asked Sheers if the barking would cause “a deprivation of your enjoyment of your property” if he were to live directly across the street or next door.

“It would for me,” Sheers said.

“This is a district justice hearing, so we get a chance to hear the testimony and evidence that the township has and consider that, and we did that,” Lucas said. He said an appeal would be filed in the coming weeks.

Lucas said the question of dogs barking was not the issue at hand, or that there is an ordinance against dogs barking. He pointed out that the township gave a conditional use permit, and that Graf has a state license to operate a commercial kennel.

“It’s my position that the township cannot grant a conditional use permit, induce my client to spend hundreds of thousands to acquire the property, improve it, build a commercial kennel, and then after that say, ‘Oops, we’re sorry, the barking irritates the neighbors,” Lucas said.

Joe Fahnestock, a neighbor of the Ritner Kennel, said he heard a noise as he was lying in bed in the early morning hours of June 28. He said it was a rabbit distress call, which typically means that coyotes are out. He then went outside to do some coyote hunting.

“I saw a guy standing in front of her (Graf’s) dog kennel there on the road,” Fahnestock said. The individual had been using the rabbit distress call to cause the dogs to bark. “I thought it was a little ridiculous that somebody’s got to do something like that.”

In an email from Lucas, the man was described as a white man, about 5’5” with an average build. Regardless of who it was, Fahnestock did not agree with what has been happening with the Ritner Kennel.

“I think they should leave the lady alone,” he said. “If somebody wants to move to the country, they should deal with things like that.”

Where to go from here?

Due to the ordinance, Graf said she will relocate her kennel to an area near Bloserville in Upper Frankford Township.

Lucas said Graf accepted the offer for a larger property, and pending an appraisal and approval, “she should be good to go.”

Graf said the new property has 80 acres and will be more isolated from neighbors. Though she said she would probably be happy at the new location, she wouldn’t be leaving if she didn’t have to.

“It means that I have to start all over again when I planned to be here for the rest of my life,” Graf said. “It’s definitely not something that I would have planned on doing, or something I wanted to do.”

Shippensburg man charged in Friday's crash with horse and buggy

In her new job as a senior vice-president for New Story Schools and River Rock Academy, Christina Spielbauer will return to her passion of helping at-risk and special needs youths.

Here is a look at the 2021 trick-or-treat dates in Cumberland County. All events are scheduled to take place from 6 to 8 p.m.

Today's police log includes a couple of crashes, a drug-related arrest and charges for hindering the apprehension of a felon.

Today's Sentinel police log includes a hit-and-run in Mechanicsburg, a false reports arrest in Wormleysburg, and a motorcycle theft in Shippensburg Township.

Newville Borough confirmed that its Halloween Parade scheduled for Monday night has been canceled due to expected thunderstorms.

Dominic Garcia turned his experiences into lessons he shares with an online community that he’s grown primarily though the livestreaming platform, YouNow.

Police say four people, including three men and one woman, were treated for gunshot injuries.

Watch Now: US Postal Service first-class mail is about to get slower

Watch Now: US Postal Service first-class mail is about to get slower

Ritner Kennel owner, Molly Graf has had numerous citations from West Pennsboro Township due to the dogs barking so much. German Sheperd puppies shown at the kennel.