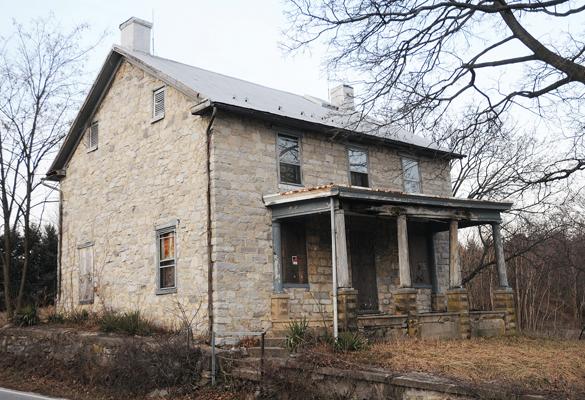 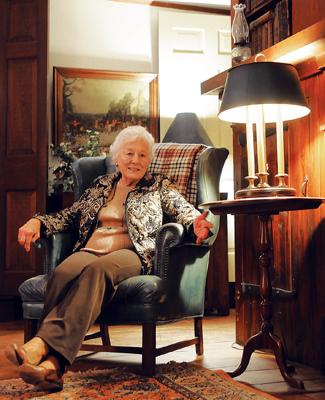 Mary Jane Kretzing-Karison talks about the efforts to get a historical marker for the Junkin House. Jason Malmont/The Sentinel
By Becca Gregg, Sentinel Reporter, January 22, 2010

On August 23, 1752, in a grassy field under the canopy of a tree, the reformed Presbyterian Church held their first communion outside of the British Isles.

Led by Joseph and Elizabeth Junkin, on whose property it was held, “the Junkin Tent” as it came to be known, was a week-long celebration marked by a church service that lasted nine hours.

Over two and half centuries later, the grassy field is now a concrete parking lot situated mere yards from bustling Carlisle Pike in New Kingstown. The Junkin’s house, built of limestone in 1738, has been condemned and is in danger of being torn down.

A group of concerned citizens are banding together to preserve the rich history of the site.

In March of 2009, “The Junkin Tent Marker Project,” spearheaded by Mary Jane Kretzing-Karlson, owner of Kanaga House Bed and Breakfast, was granted authorization by the state Historical and Museum Commission for the placement of a state historical marker to commemorate the Junkin Tent service.

Upon learning of the Junkin Tent project, the Civil War Dance Foundation, based in Camp Hill, has stepped forward with a $500 donation towards the cost of the marker. On Sunday, the foundation will formally present the gift at 1 p.m., near the future site of the marker.

Following the presentation, a reception will be held from 2-4 p.m. at Kanaga House on 6940 Carlisle Pike.

“(The donation) was incredibly generous and totally unexpected,” said Junkin Tent committee member Clarence Bouchat, of New Kingstown, who added that the group is not getting state help towards the cost.

With the donation from the Civil War Dance Foundation, in addition to money earned from the sale of commemorative minted coins, the Junkin Tent committee hopes that enough funds will be raised to plan a proper dedication come August.

“We want to put (the marker) closer to US-11 so you can actually see it from the road,” explained Bouchat, a professor at both the Army War College and Harrisburg Area Community College, who Kretzing-Karlson describes as the “steerer” of the project.

The committee, added Bouchat, is working with the local township for advice in making the location of the marker as safe as possible, despite the close proximity to Carlisle Pike.

The initial idea to commemorate the Junkin Tent site was developed by Kretzing-Karlson and Bouchat in July of 2008.

“Together we researched for a year and gathered up all the history,” said Kretzing-Karlson, who has owned Kanaga House, built in 1775 by Joseph Junkin Jr., since 1969. “I’ve had many descendents of Joseph Junkin Jr. stop here and give me more history.”

And that history is what Junkin Tent committee members hope will live on through the placement of a historical marker.

As Kretzing-Karlson puts it, “(The Junkins) really were on the edge of the frontier here.”

Winners should make an appointment to visit a Pennsylvania Lottery office to claim the prize in person. Prizes cannot be claimed at a retailer or by mail.

North Middleton Township Police reported last week that the township has passed a new fireworks ordinance in light of complaints and concerns from residents.

Next year’s proposed 0.3 mill municipal recreation tax is projected to generate an annual funding stream of $585,000 dedicated to maintenance and upgrades of South Middleton’s expanding park network and recreational programming.

South Middleton Township has stepped in to help the Boiling Springs Civic Association host a modified event this Sunday.

Mary Jane Kretzing-Karison talks about the efforts to get a historical marker for the Junkin House. Jason Malmont/The Sentinel
© Copyright 2021 The Sentinel Newspaper, 327 B St. Carlisle,PA | Terms of Use | Privacy Policy | Do Not Sell My Info
Powered by BLOX Content Management System from TownNews.com.
You don't have any notifications.