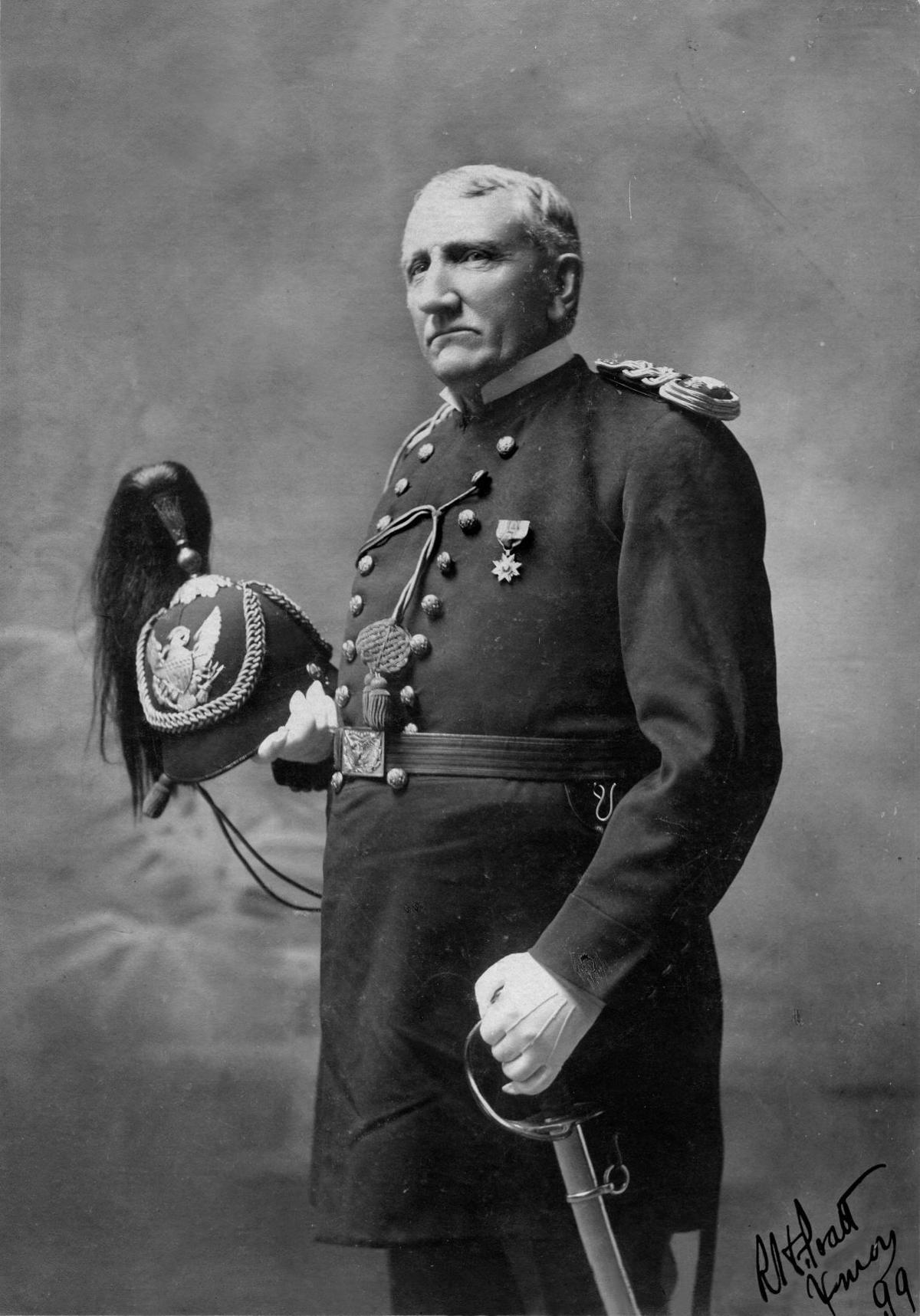 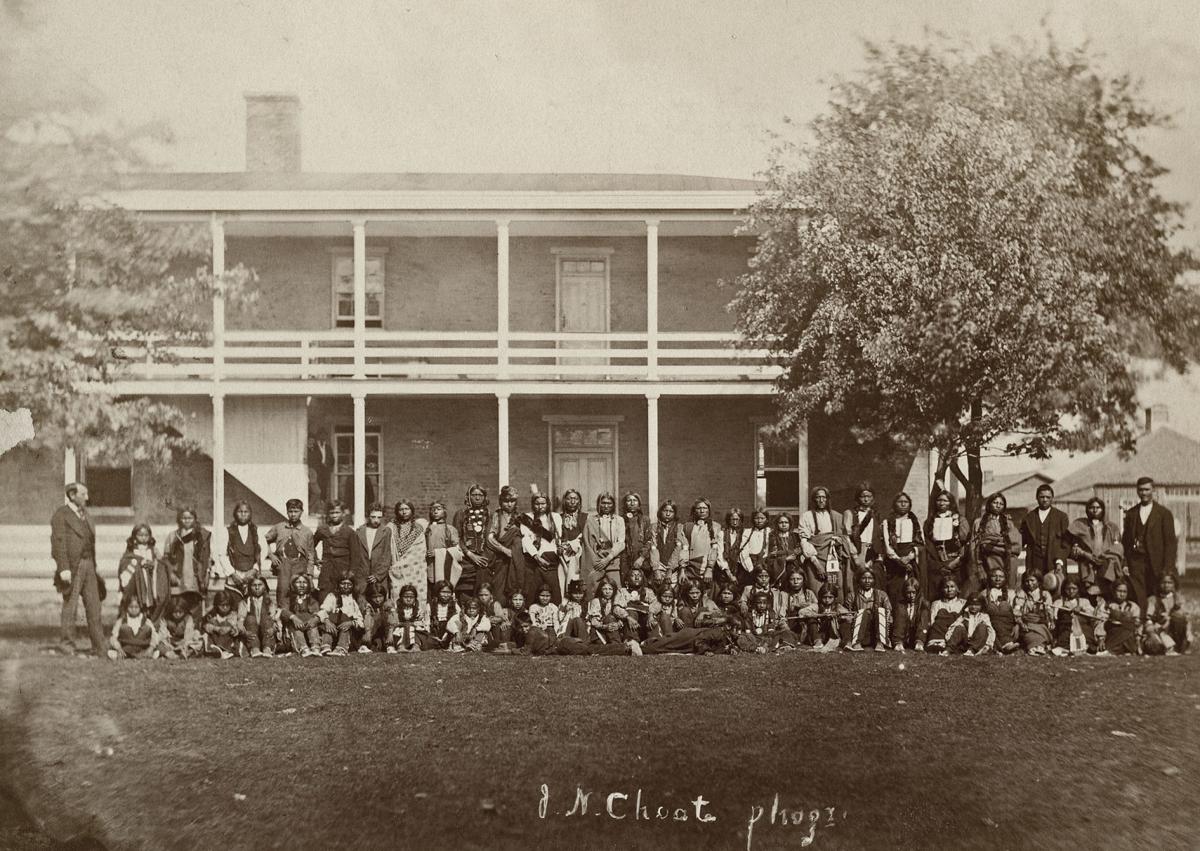 This is the first group of Native American youths to arrive at the Carlisle Indian Industrial School. This photograph dates from Oct. 6, 1879, and the children are Sioux Indians from the Rosebud and Pine Ridge reservations. 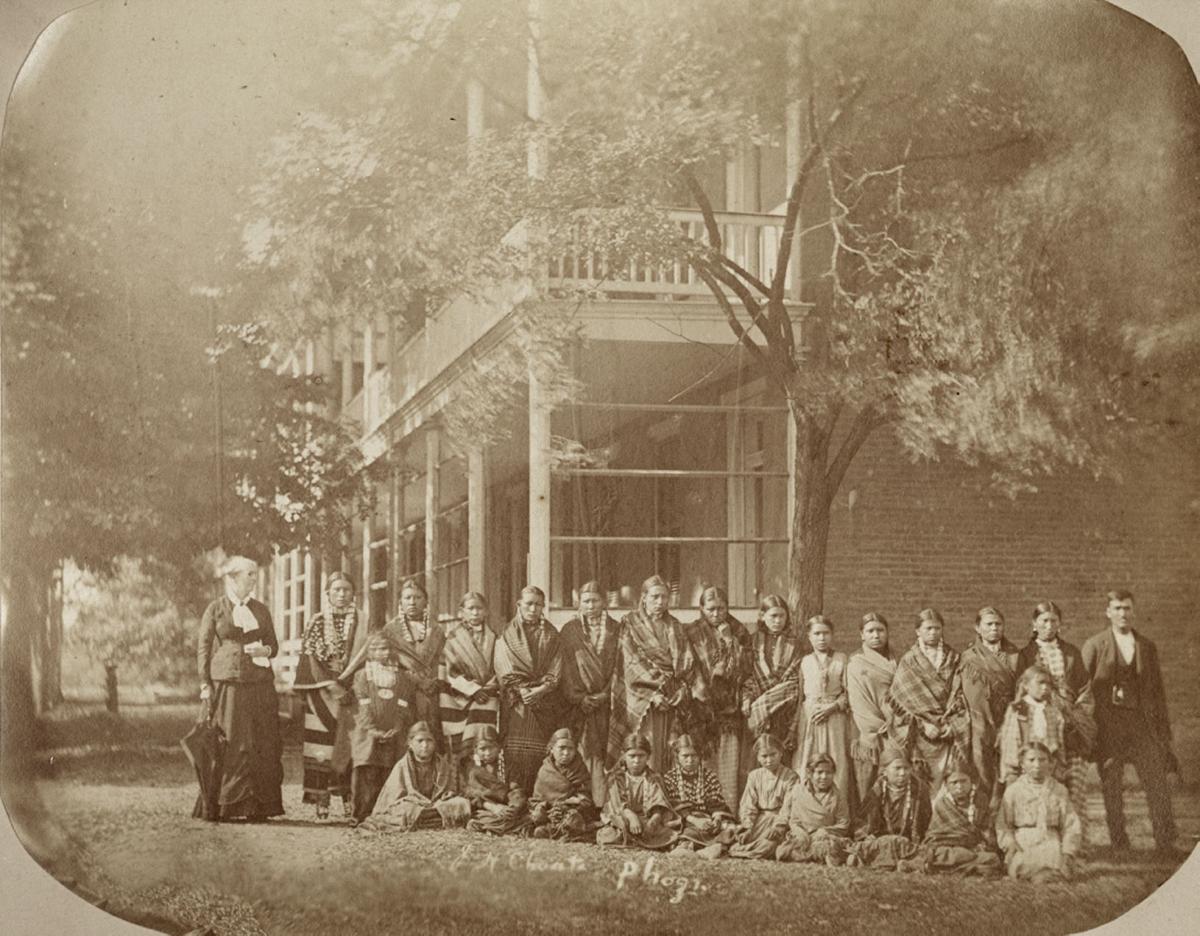 These Sioux Indian girls were among the first students to be enrolled at the Carlisle Indian Industrial School.

The experiment began with native children crying out in the night.

Their first introduction to Carlisle was on a train pulling into the downtown station around midnight on Oct. 6, 1879. Hundreds of onlookers had gathered to watch them disembark.

Wrapped tightly in blankets, these first of many thousand students were escorted to the open gates of an abandoned Army post and separated by gender. There, they slept fitfully on bare floors unaware of the indoctrination to come.

“The experiment proved a success,” J. Webster Henderson told a crowd almost 40 years later. “The Indian was led from savagery into civilization and the great problem had been solved.”

A neighbor for years of the Carlisle Indian Industrial School, he was among the local residents who gathered 100 years ago on Aug. 26, 1918, for a farewell reception.

“The community will miss you sadly,” Henderson said in a speech in front of the superintendent’s home. “Your pupils added zest, attraction and interest to the streets of Carlisle. Your conduct has been a model for other young men and women. Goodbye.”

For generations, the school was a major driver in the local economy with a band and football team that put Carlisle on the map. But the heyday was long over as the few remaining students stood by the evening of the reception to sing the chorus of the school song, “Old Carlisle.”

The lyrics were written by Glenn “Pop” Warner, the legendary football coach who discovered Jim Thorpe. The gridiron tactician was cheered by the crowd that had marched to Carlisle Barracks from the Square.

“The school has fulfilled its mission,” Warner said. “For Gen. Pratt intended that it should last just as long as it would take for civilization to get among the Indians, break up the reservations and plant schools among them.”

What started as the dream and vision of Richard Henry Pratt ended with the decision by the War Department to use Carlisle Barracks as the host site of a hospital for wounded soldiers returning from Europe during World War I.

For Native Americans, the school has become a symbol of intergenerational trauma, but also a testament to the strength, spirit and resilience of their cultures.

“I don’t think any tribal nation would make a resolution praising the Carlisle Indian School,” said Barb Landis, archives and library specialist for the Cumberland County Historical Society. “Part of its legacy is continual dysfunction even though it has been closed for 100 years.”

The result has been a confused narrative to match a conflicted cultural identity. There is no uniform point of view on the impact Carlisle had on Native American culture. Landis has visited communities where factions view the school as a source of intergenerational trauma while other factions see it more as an institution that drove generations of native youths to succeed and advance in the white man’s culture.

To Louellyn White, a descendant and Mohawk Indian, the legacy of Carlisle is a complex unfolding story that defies the simplicity of being purely negative or positive. She is the cofounder of a coalition being organized to renovate an historic farmhouse at Carlisle Barracks into a visitors’ center for descendants.

Carlisle is the icon of an era, the beginning of a federal policy to take children away from tribal communities and to force them to assimilate into the white man’s culture, said Christine Diindiisi McCleave, executive director of the National Native American Boarding School Healing Coalition.

She said earlier attempts at assimilation failed because the native children could reengage themselves every night after school in tribal culture and language. McCleave is a Carlisle Indian School descendant and member of the Turtle Mountain Ojibwe tribe.

Landis compared what happened to the Indian as a force of nature sweeping through the country. “It was like an avalanche of European cultural mores,” she said.

Westward expansion by settlers and immigrants drove a need for land and an agenda by policymakers and power-brokers to break up native ties to ancestral territory.

This movement was well underway when Pratt, a veteran soldier, came up with the idea of removing Indians from tribal influences and putting them among the white man to learn a useful trade. He put this thinking into practice as the jailer of violent Indians rounded up on the western frontier and imprisoned in Florida.

Pratt removed their chains and put the natives to work making souvenirs to sell to tourists. He allowed them to keep the money they earned and selected the most trustworthy to learn to work in the mills and farms. Many of those men converted to Christianity and took to wearing white man’s clothes as they learned English.

Pratt soon realized the best chance of success was to train young Indians not yet set in tribal ways, so he lobbied the Department of the Interior to get Carlisle Barracks on loan from the War Department and to open a school for native children. Pratt sold Carlisle merchants on the prospect of increased commerce, garnering support from the town that continued until its closing in 1918.

“Pratt’s philosophy was to rescue them from what he considered to be their backwards ways,” Landis said. “His attitude was completely patronizing and racist, and that was the thinking of the time. His agenda dovetailed very nicely with the congressional agenda.

“Why was Carlisle so influential?” Landis asked. “It was because of Pratt’s tenacity. He was very persistent in putting his philosophy forward. He had a mouthpiece through the Indian school newspapers.”

Pratt was superintendent of the Carlisle Indian School from 1879 to 1904. During that time, the campus produced a number of student publications that came under the editorial control of the school administration. As a result, Pratt had a platform on which to spread propaganda about the school and its mission.

What the public was exposed to were the success stories of students finding jobs in the trades and agriculture. The irony was the skills taught at Carlisle were centered on farming at a time when agriculture was being consolidated, and on pre-industrial-era trades that were no longer relevant to the economy.

“The vocational skills they were being taught were anachronisms,” said John Bloom, a professor of history at Shippensburg University. He said the purpose of this curriculum was to teach native youths an American work ethic.

Living conditions were so poor on many of the reservations that parents were sending their children away to Carlisle and other boarding schools just so they can have food and decent clothing, Bloom said.

But all the while the curriculum at Carlisle was designed to “Kill the Indian and Save the Man” by replacing a native culture, language and tradition with one based on European and Christian values.

“Pratt was a master at PR,” Landis said. “It worked for him for a long time, but then it began to unravel.”

Pratt stepped aside in 1904. Ten years later, the Carlisle Indian School came under a congressional investigation amid allegations of misconduct. That inquiry led to the dismissal of then-Superintendent Moses Friedman, athletic director “Pop” Warner and band master C.M. Stauffer.

“After the investigation … attendance at Carlisle dwindled,” local historian Linda Witmer wrote in her book about the Indian school. “More nonreservation schools were established in the West. Indian children no longer had to travel east for their education. To an economy-minded (Indian) Bureau in Washington, D.C., it seemed cheaper and more practical to encourage the enrollment of the western schools.

“Pressure from the Indian Bureau and further reduction of enrollment due to World War I forced the inevitable,” Witmer wrote. “In the end it was not the Indian Bureau but the War Department that finally closed the doors. The patriotic necessity of caring for wounded World War I American soldiers had taken precedence over the school’s failing programs.”

The War Department exercised its right to revoke the transfer of Carlisle Barracks to the Department of the Interior. This brought to an end the 39-year existence of the Carlisle Indian School, but its legacy remains an influence and its history an unfolding story.

Members of the Sentinel staff were named finalists in eight categories for the 2018 Pennsylvania Associated Press Media Editors contest, which…

This is the first group of Native American youths to arrive at the Carlisle Indian Industrial School. This photograph dates from Oct. 6, 1879, and the children are Sioux Indians from the Rosebud and Pine Ridge reservations.

These Sioux Indian girls were among the first students to be enrolled at the Carlisle Indian Industrial School.