Watch Now: Moving day in Summerdale as Enola Miller House inches toward a new future
0 Comments
Share this
{{featured_button_text}}
1 of 5 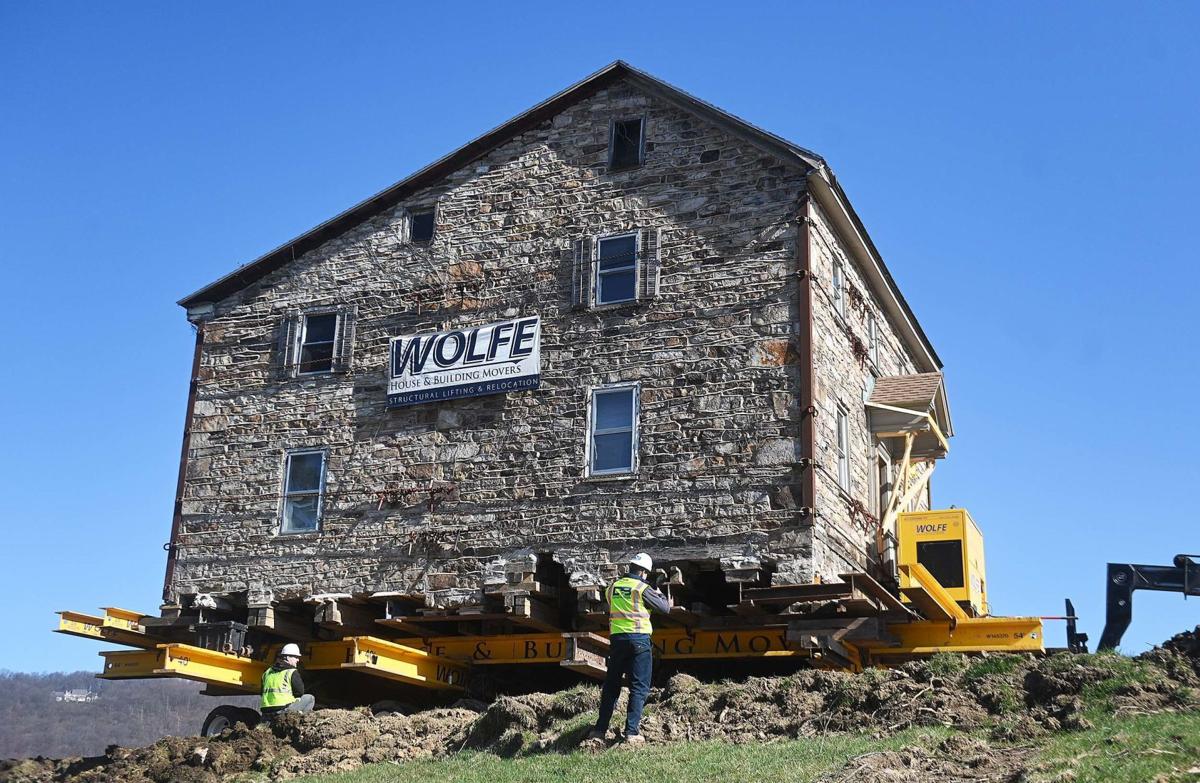 Wolfe House & Building Movers relocate the Enola Miller House Tuesday in East Pennsboro Township to its new location a third of a mile away. 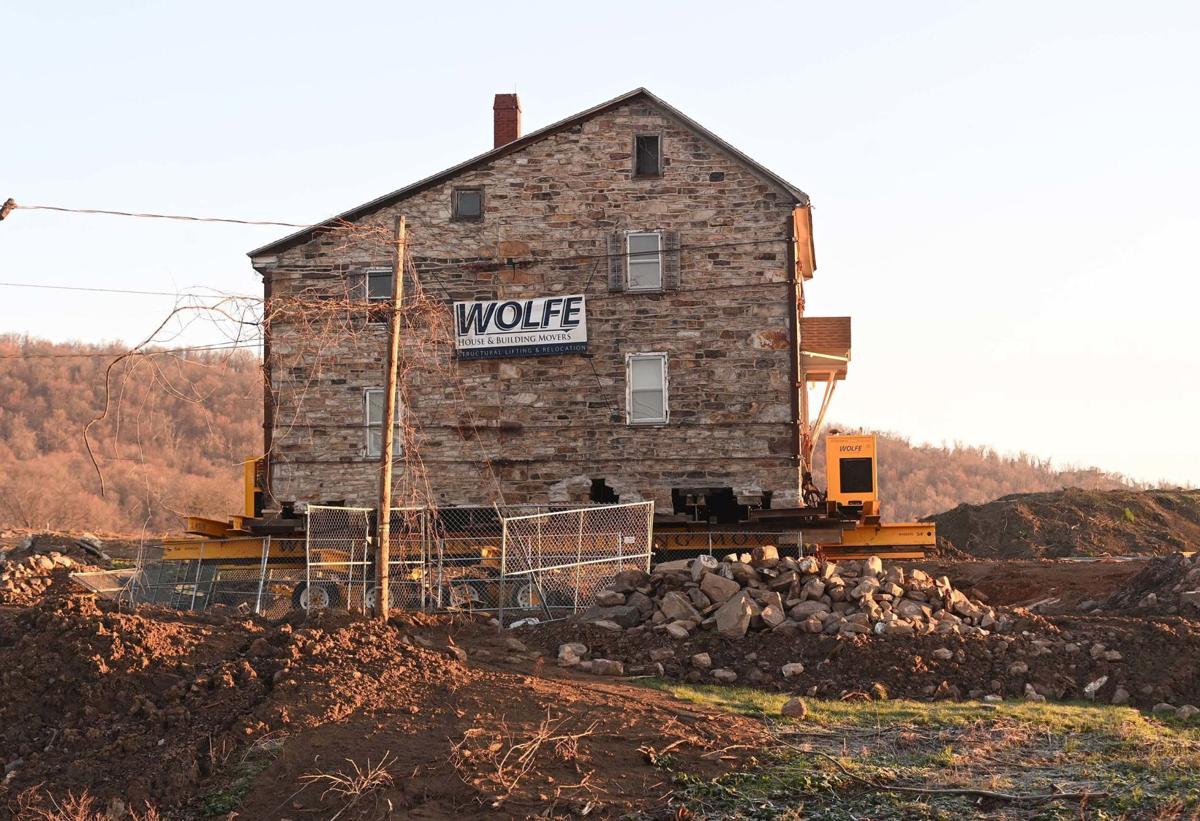 The Enola Miller House waits to be moved to its new location Tuesday morning. 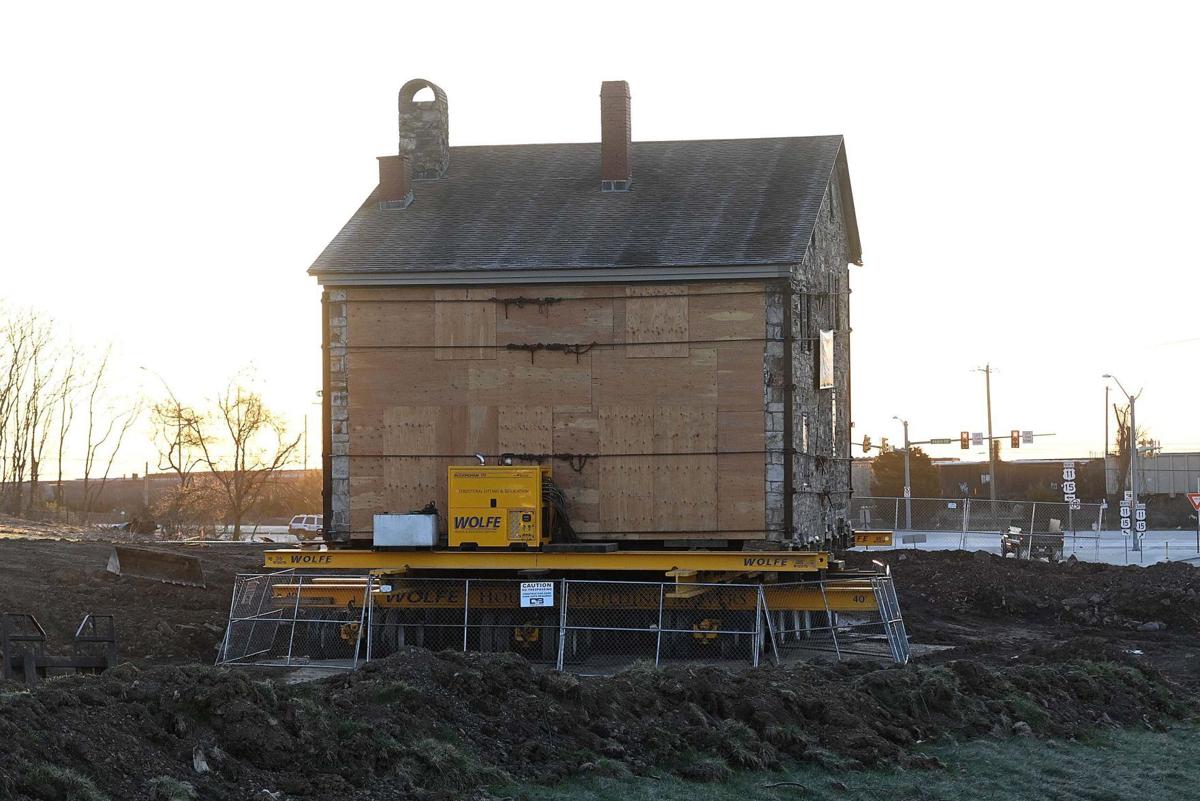 The Enola Miller House in East Pennsboro Township is prepared to be moved Tuesday morning. 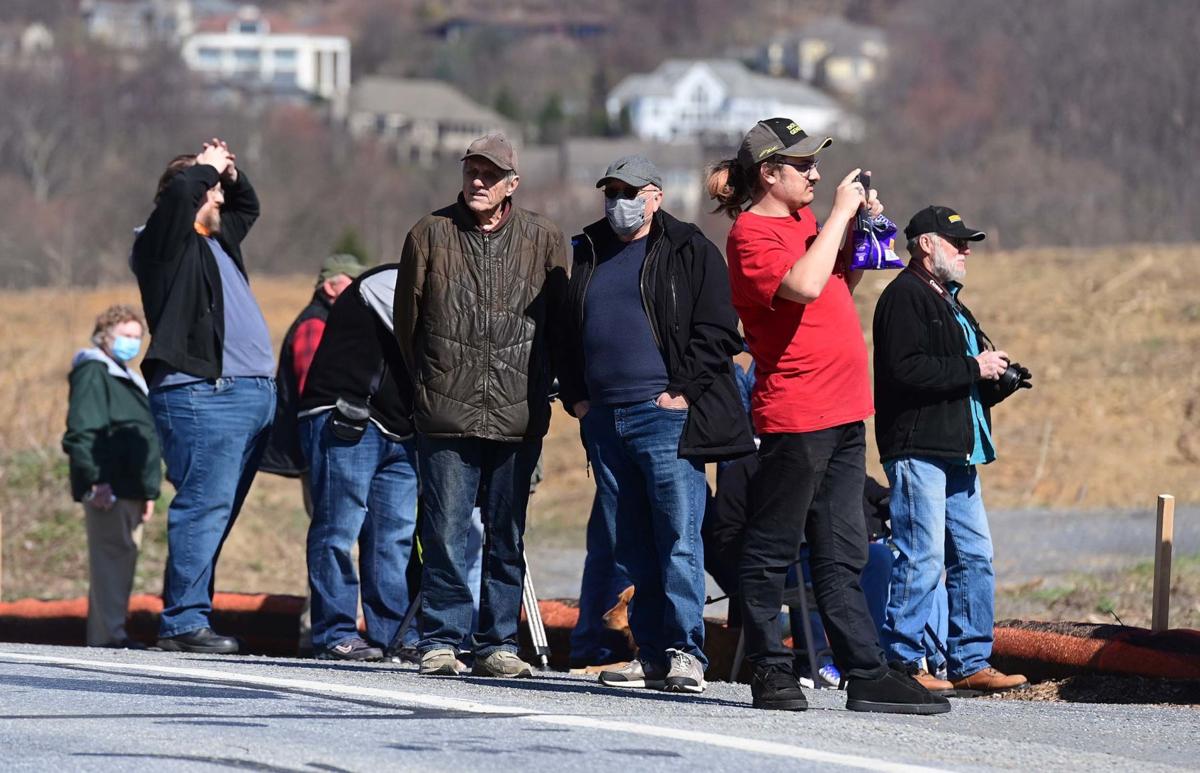 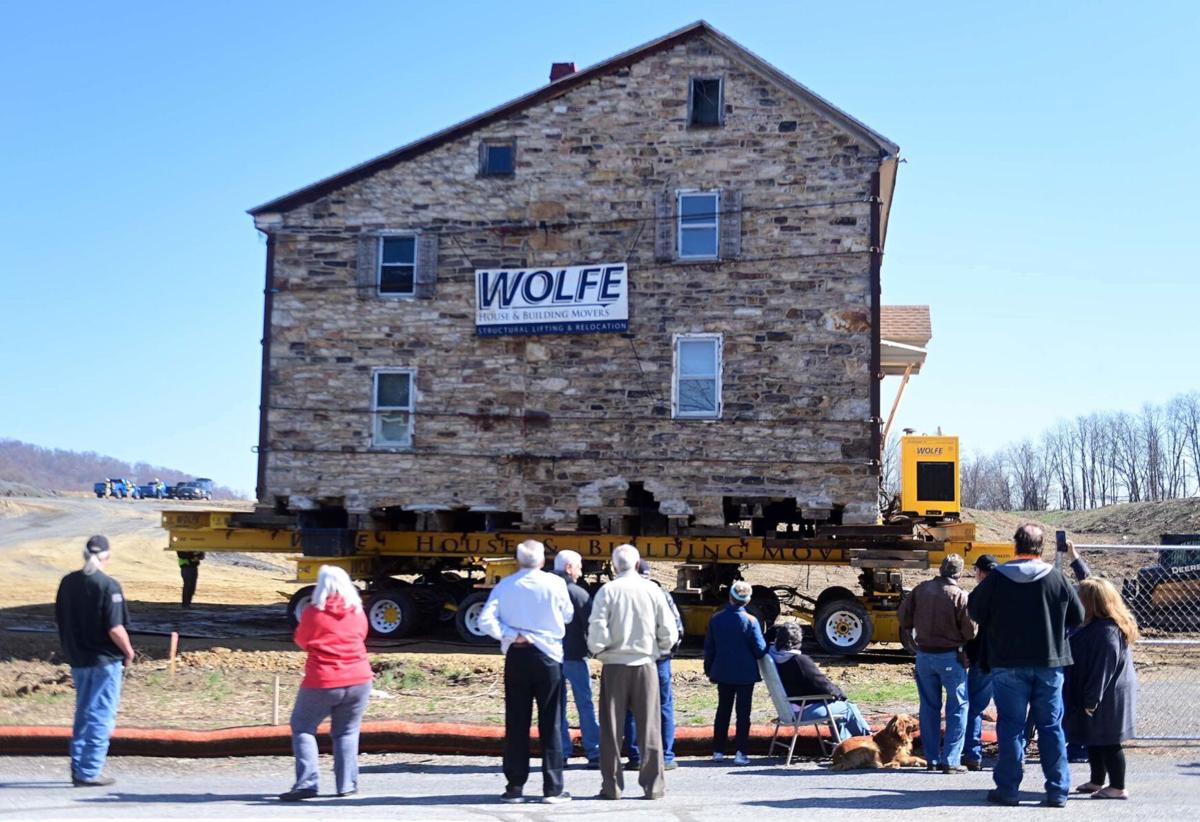 A bittersweet move may be the push advocates need to boost a capital campaign to preserve the historic Enola Miller House in East Pennsboro Township.

The weather and site conditions Tuesday morning enabled a work crew to slowly move the stone building toward its final destination — a new foundation about 1,300 feet from where it has stood for about 180 years.

“We’re hoping that there will be a lot of media coverage,” said Barbara Gertzen, a board member with the Historical Society of East Pennsboro. “As several people have said, it’s a very bittersweet moment.”

She is among the advocates who tried for years without success to keep the building at its original site in the face of mounting development pressure. Tuesday, she accepted the fact that for the house to survive progress, it needs to be moved to a different location where it can be restored and repurposed.

The historical society has set up a GoFundMe page to collect a target goal of $300,000 to restore the house, make it handicapped accessible and to add safety and security features.

“Donations can be made to the historical society via check or credit card,” Gertzen said. “People can earmark money for preservation of the house by writing ‘EMH’ on the memo line of their check.”

“There’s a lot of work that needs to be done inside,” Gertzen said. “It’s probably going to be the beginning of 2022 before the house might be open to the public.”

The historical society is also collecting donations for the construction of a pole building on the same one-acre lot the Capital Area Intermediate Unit had donated for the Enola Miller House relocation.

“We’re just happy that the house is moving,” said John Bruetsch, a spokesman for East Pennsboro Township. “Some people are upset that it’s being moved from its original site, but there are two ways of looking at it. It could have been torn down.”

The 1841 home is the birthplace of Enola Miller, namesake of the town of Enola. The building was listed on the Cumberland County Register of Historic Places in spring 2018.

Once relocated, the historical society plans to develop the house into office and exhibit space, along with a visitors’ center and a living history reproduction of how Enola Miller lived. The pole building will provide space for research, education programs and storage for artifacts.

The plan is to move the house most of the way today and stop at a point where overhead power lines are located near the intersection of Miller and State streets. PPL is scheduled to come in next Monday, April 5, to relocate the power lines clearing the way for the crew to finish moving the house to its new location.

Motorists can expect more traffic Wednesday on First Street in Summerdale as spectators watch the house being moved uphill, Bruetsch said. Parking is prohibited along the east side of the street.

The house is on a 48-acre tract that is slated for residential and commercial development. The property owner, First Street Associates, has hired Wolfe House & Building Movers of Bernville, Berks County, to do the work.

In business about 50 years, Wolfe began to specialize in building lifting and moving about two decades ago, salesman Robert Sauder said. “We’ve refined the process and developed different technology.” The company has done projects all over the U.S. and even internationally.

Prior to a move, work needs to be done to disconnect the building from all utilities, reinforce its doors and windows and develop a temporary route between the old and new building locations, Sauder said.

A work crew then excavates and removes the old foundation gradually replacing it with a network of oak timbers called cribbing that provides support to a steel grid structure designed to protect the building during the move, Sauder said. Hydraulic jacks are placed under the cribbing to slowly lift the building which is then placed on massive dollies that resemble the axle system of a tractor-trailer truck.

The building is then moved slowly along the route until it reaches the footers of the new location at which time the process is reversed and a new foundation is built up to support the building, Sauder said. He added there are number of challenges associated with moving a stone building like the Enola Miller House, which weighs about 400 tons.

The typical stone building weighs between 300 and 700 tons while a wood frame building of similar dimensions weighs between 60 and 120 tons, Sauder said. As a result, more steel is needed to support the weight of a stone building in transit. Stone buildings also tend to be more rigid and prone to cracks so extra care and planning needs to be done to control how the steel grid shifts during the move.

The Enola Miller House had weak spots in its foundation, Sauder said. He added that one section of the house is a frame addition which had a narrow crawlspace that sat atop a rocky shelf. Both site conditions required the crew to make adjustments to safely excavate the foundation and install the cribbing.

The Enola Miller House has to be moved uphill about 1,300 feet. A successful move requires that every change in elevation be smooth and gradual to make sure the grid is kept on a level plane and the building is protected, Sauder said.

Wolfe has also been hired to move the Junkin House in Silver Spring Township sometime this spring or summer.

Preparations are underway in Silver Spring Township to move the historic Joseph Junkin Sr. House to an adjoining lot within the next 60 to 90 days.

Wolfe House & Building Movers relocate the Enola Miller House Tuesday in East Pennsboro Township to its new location a third of a mile away.

The Enola Miller House waits to be moved to its new location Tuesday morning.

The Enola Miller House in East Pennsboro Township is prepared to be moved Tuesday morning.