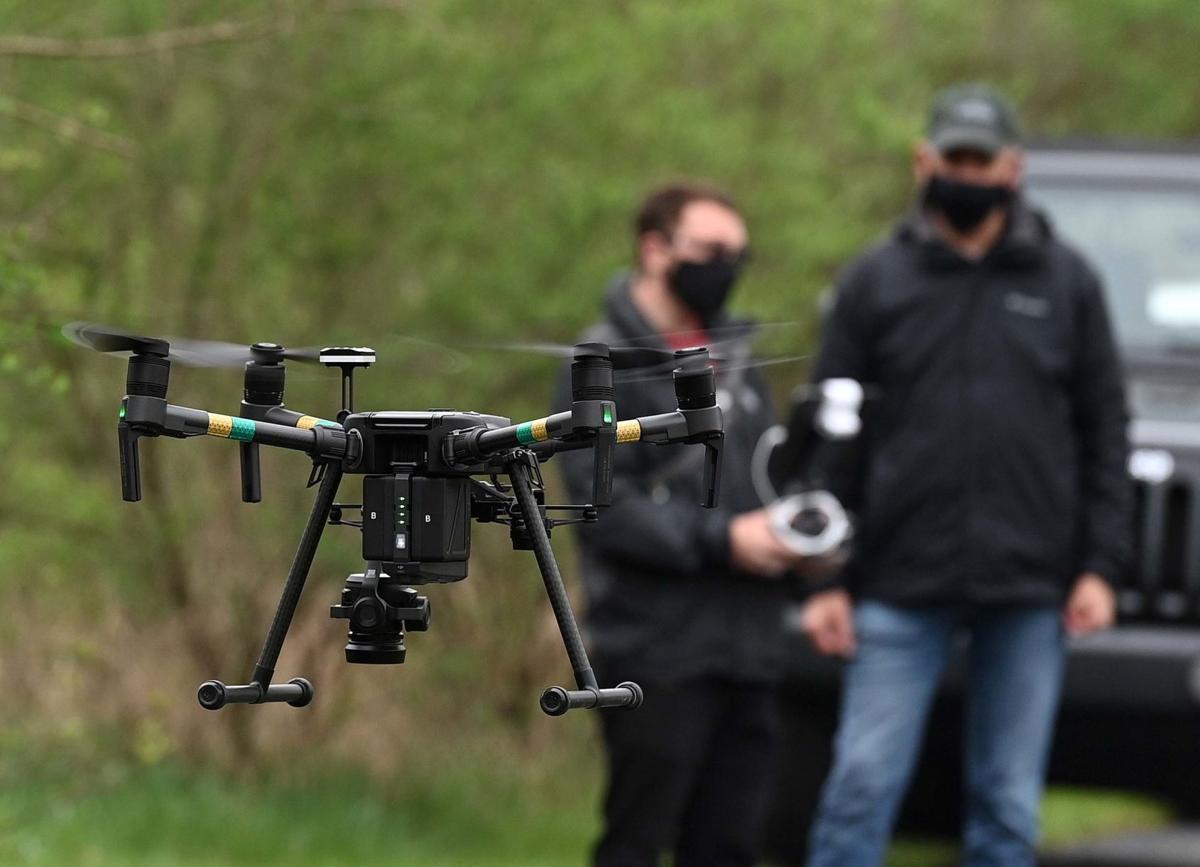 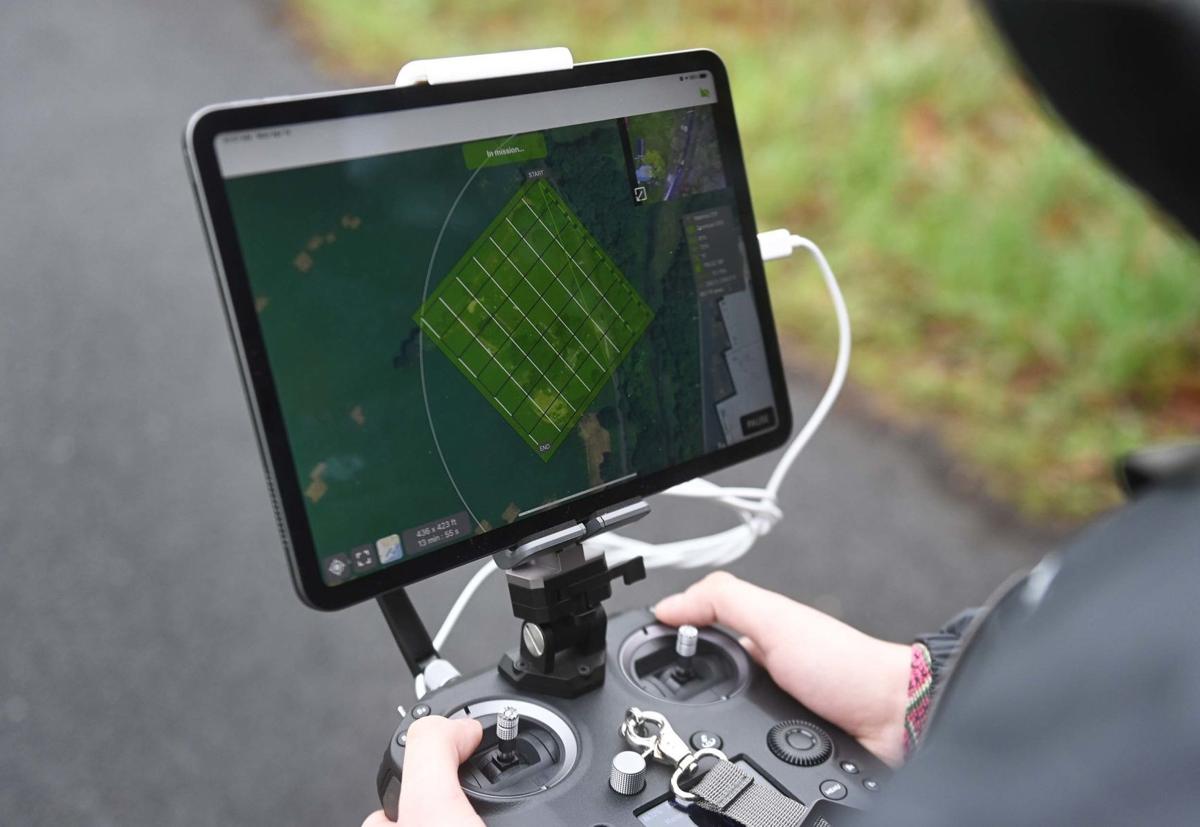 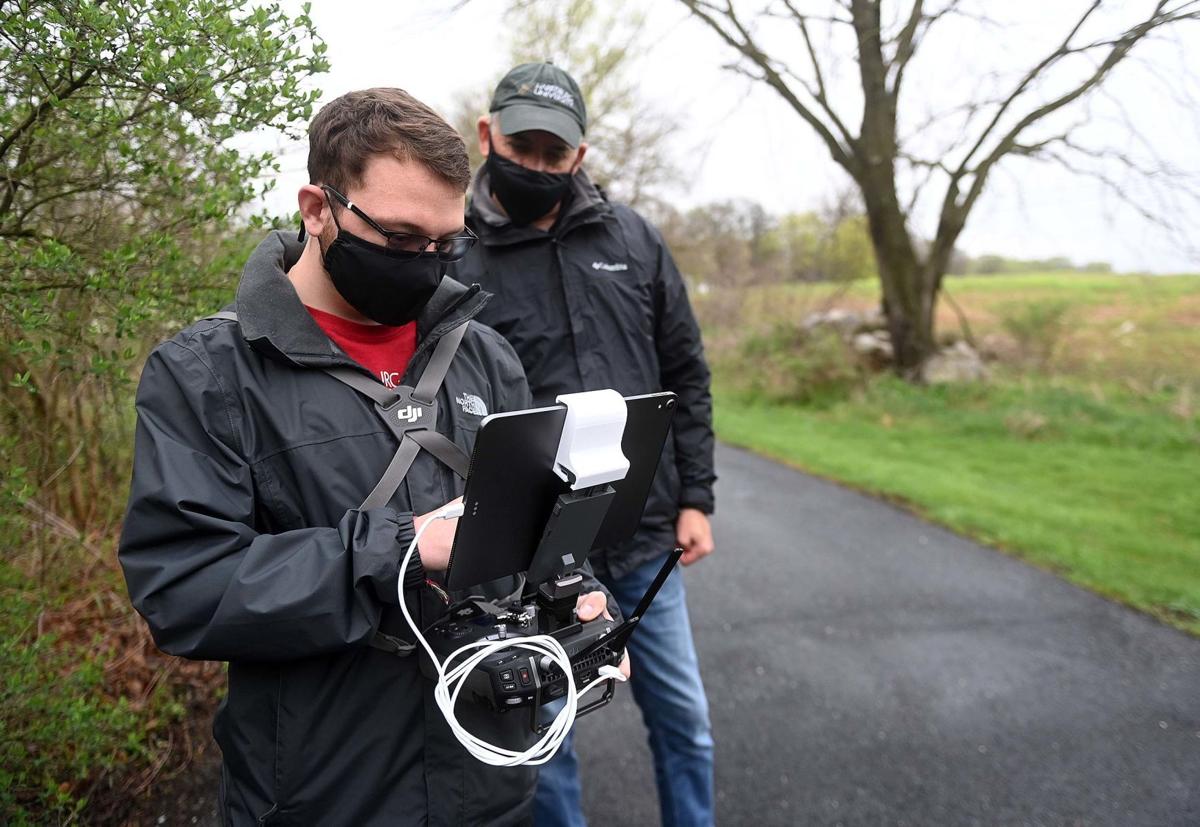 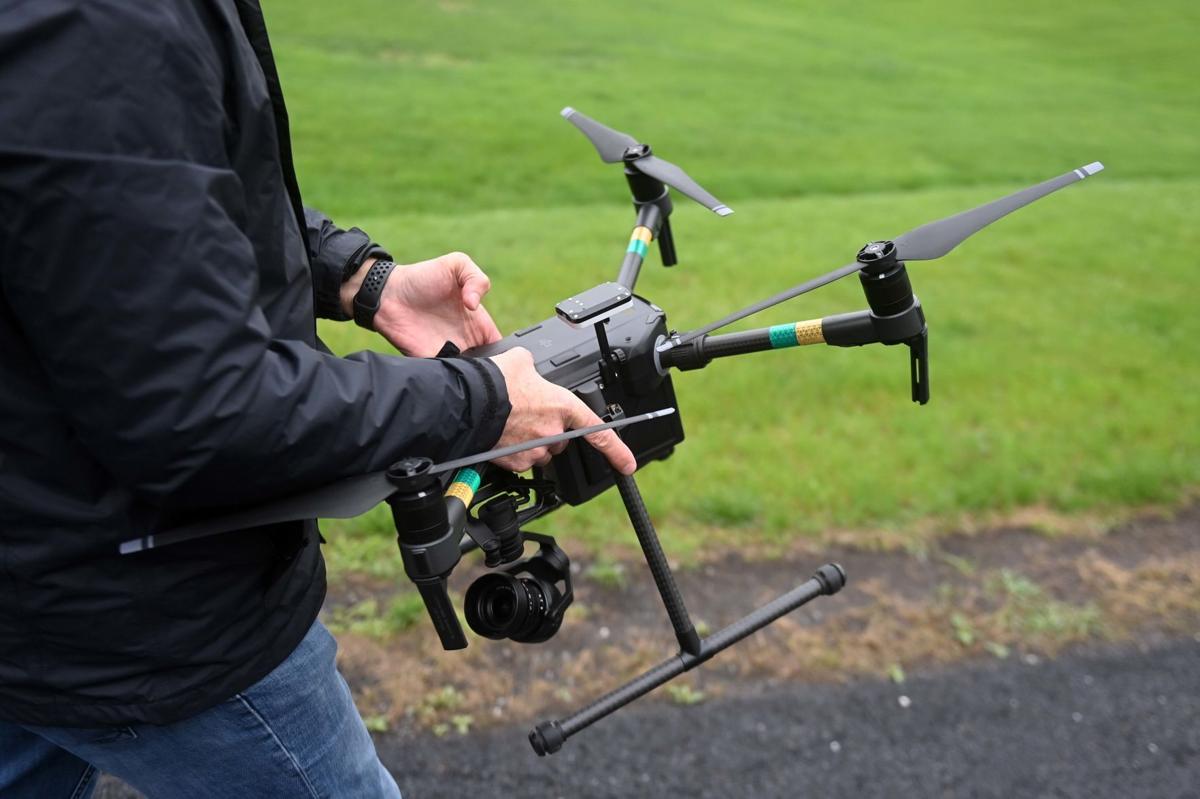 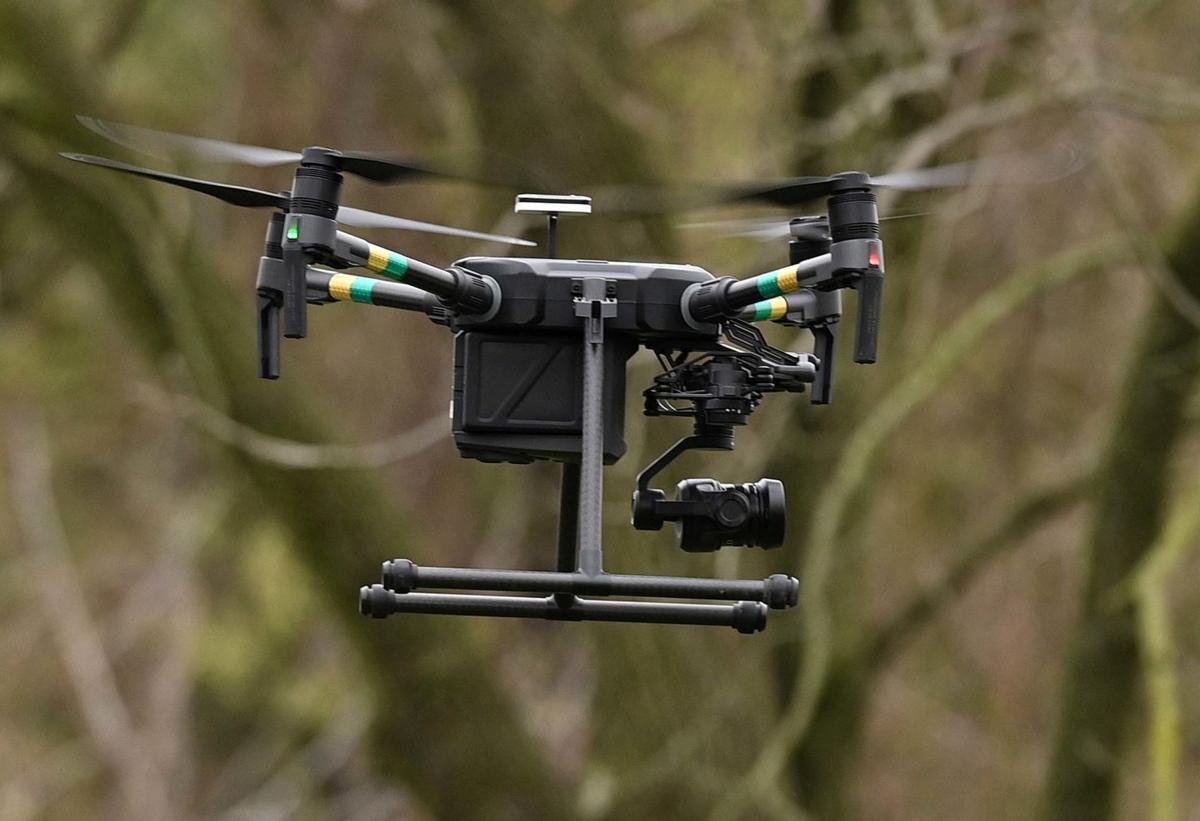 A drone maps a portion of the McCormick Farm property and buildings in Silver Spring Township Monday.

The cloudy sky over Hogestown was abuzz with a strange visitor around noon on Monday.

A drone from the Harrisburg University of Science and Technology was flying over the historic McCormick farmstead in Silver Spring Township.

Junior Joshua Riess was at the controls monitoring the pre-programmed flight path on the view screen. Every dot on the line represented a time stamp when the drone snapped a top-down photo of the fields, farmhouse and out-buildings.

Albert Sarvis, an assistant professor of geospatial technology, was on the ground helping Riess conduct the image collection phase of his graduation project. Three drone flights were done Monday to visually document the property that was first settled in 1745 by Thomas McCormick of Londonderry, Northern Ireland.

Harrisburg University had teamed up with the West Shore Historical Society (WSHS) on the first project of what could become an ongoing initiative to preserve the past using cutting-edge drone technology.

Sentinel Top Stories of 2018: Eminent domain and the McCormick Farm

The goal is to make the imagery accessible to students in grades 3-12 in all school districts in Cumberland County, said Christine Musser, a local historian who sits on the WSHS board of directors. “We want to get something into the hands of kids. We want them to learn about local history and the importance of heritage preservation.”

During the first flight, the drone camera was angled 70 degrees with the ground to collect overlapping images from the side that will be used to construct a three-dimensional model of the property.

This was followed by a second pre-programmed flight where the drone camera was pointed straight down to produce images that will be stitched together into a mosaic of high-resolution two-dimensional aerial views.

The first and second flights were done from an altitude of about 300 feet. The cloud cover helped to minimize shadow and other negative effects from sunlight, Sarvis said. This improved the image quality.

For the third and final flight, the professor used the remote control and view screen to maneuver the drone to take still images and videos of key historic features on the farm from a variety of angles. For that work, the altitude varied from 20 to 100 feet.

To graduate, geospatial technology majors have to complete a graduation project and an internship, Riess said. The first step of the project was the completion of a paper which outlined his action steps to collect imagery along with his research into the practical application of drones in historic preservation.

The next step is to use the spring and summer to compile and process the images into a platform that could be available next fall for local school districts to access.

Monday was not the first time the McCormick farm was used in education, according to Harrisburg University. From the late 19th century to 1917, the farm was used as a meeting place to instruct farmers on raising optimal crops and livestock. That initiative became part of what is known today as the Penn State Farm Extension Program.

In 2018, the McCormick Farm became the focus of an eminent domain case with statewide, and potentially national, implications. — although the case was dropped before any substantive court rulings came down. That March, Cumberland Valley School District filed a declaration of taking to forcibly acquire 108 acres of the 116-acre farmstead with the intention of turning the land into a 1,400-student middle school campus. The district ultimately settled on a different location.

Efforts to preserve the farm go back to 1942 when Vance McCormick, the last male heir of the Harrisburg branch of the family, made the property into a memorial to his great-grandfather William McCormick. During the 1980s, the McCormick farm was transferred from the family to the Natural Lands Trust to be preserved in perpetuity.

Vance McCormick was the first football coach of the Carlisle Indian Industrial School, the youngest mayor of Harrisburg and a partner with Mira Lloyd Dock and Horace McFarland to clean up Harrisburg during the City Beautiful Movement.

As chair of a presidential election committee, Vance McCormick helped Woodrow Wilson win a second term. McCormick began a cabinet member who participated in the reparation committee during the Treaty of Versailles negotiations that followed World War I.

Based in Lemoyne, the West Shore Historical Society is active in that municipality along with Wormleysburg and the townships of Hampden and Lower Allen, Musser said. She added members are looking to expand the range of the historical society west and south into Silver Spring and Monroe townships.

Aside from the McCormick Farm, the historical society is looking at the prospect of using drones to visually document the Peace Church in Hampden, the Junkin House in Silver Spring and the Sheepford Road Bridge in Lower Allen.

Silver Spring Township supervisors on Wednesday said they have no plans to acquire land from the McCormick Farm tract to construct a road to alleviate traffic safety concerns in that area of the Carlisle Pike.

Researchers and local residents now have online access to over 10,650 documents from the colonial era of Cumberland County.

Local museums and historical societies are emerging from the pandemic with a fresh approach to presenting the past to the public.

A drone maps a portion of the McCormick Farm property and buildings in Silver Spring Township Monday.