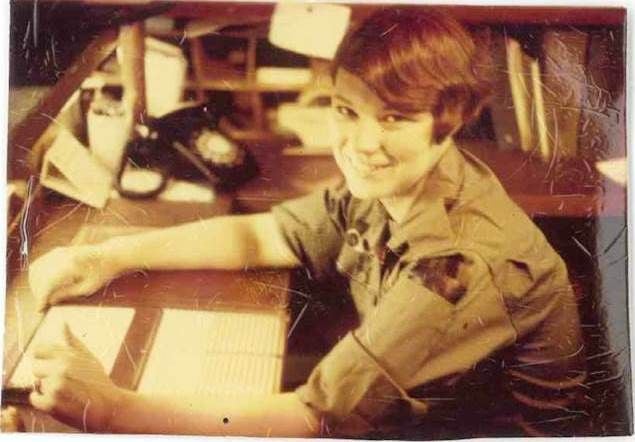 Phyllis Cogan (nee Breen) was a nurse during the Vietnam War.

In 1967, Phyllis Cogan was a student at Indiana University, Indiana, when she decided to join the Army Nurse Corps to help pay for college.

“They had something called the Army Student Nurse Program, through which you could have your last year or two paid for,” she explained. “You would enlist in the Women’s Army Corps at that time. You enlisted as a Private First Class. You got an ID card and you could use the PX, and it sounded like a great deal. I think I went to that PX twice the whole time because it wasn’t really convenient, but it was nice to have.

“But what was really important was that you got a stipend,” she added. “It was under $100, but it seemed like a fortune. Six months before I graduated I was honorably discharged from the Women’s Army Corps, and the next day I was commissioned as a Second Lieutenant in the Army Nurse Corps, and they paid for my last year of school. It was wonderful.”

Though her primary motivation was financial, she says there were other reasons for joining the Army.

“My father had been a Marine in World War II,” she said. “This was a man who could not see the American flag without breaking into tears. He did think America could do no wrong, but he had great pride in what he had done. My mother was a little concerned that military nurses could get the wrong kind of reputation. My father replied: ‘Well, if they know her they’ll know better, and if they don’t know her what do you care?’ I always knew that my father was proud of my service.”

After graduation, she went through basic training, took a little leave to visit her family, and spent about six months at Fort Bragg before heading off to Vietnam. She arrived on April 19, 1969, her brother’s birthday, and departed one year later on April 19, 1970.

“I thought it was kind of exciting, actually,” she said her of arrival in Vietnam. “We flew in in the middle of the night and slept briefly on cots, and were sent out the next night. I was sent to Chu Lai and assigned to the 27th Mobile Army Surgical Hospital. I was 22 years old and would call myself fairly naive. I hadn’t seen anything horrible happen yet, but I knew bad things did. At that point it was an adventure, but I had no idea what to expect.

“When I got to the hospital, that was an adjustment. They showed us out hootches. They were semi-permanent wooden buildings. Of course it was hot, but they had a separate room for the nurses and doctors who worked the night shift that had air conditioning, because you couldn’t have it for each room. And it was so hot you couldn’t sleep. But that broke down about halfway through and never got replaced. But we all survived it. The joke was that the pilots had air conditioning, but they said ‘Well you don’t want a sleepy pilot.’ I thought you might not want a sleepy nurse either!

“The hootches weren’t bad. They were small, and you had a few shelves, your footlocker, a small cabinet, and a little closet for hanging clothes. The Mama-San’s did our laundry. We ate in the mess-hall. The food was for young men, so it wasn’t exactly dietary heaven for a young woman who wanted to watch her weight. But the food was solid, I don’t remember disliking it.”

Phyllis and the other nurses enjoyed a few perks of being the only American women.

“There was a civilian engineering outfit nearby, and they would invite the American nurses over to their compound fairly often. And they had steaks, and shrimp, and all the good stuff. And the wine. So it was nice. I don’t think the male nurses got invited very often.”

“When I got there they said, ‘Have you ever started an IV,’ and I said ‘Yeah.’ I’d been on a ward at Fort Bragg and learned how to do IV’s with an 18 gauge needle. So they said ‘Oh good, we’ll put you in the ER.’ I said I didn’t have any ER experience, I’m just out of school and my school didn’t have an ER. I got down there and discovered that the IV they wanted me to use was even bigger. I said ‘I couldn’t get that in a calf’ and they said ‘Before long you’ll be getting it in children.’ Which turned out to be true.”

Her patients in the ER were mostly injured. She saw a lot of injured limbs, shrapnel wounds that were “not too deep,” and some head wounds.

“We lost some patients. They came in with severe injuries that we couldn’t treat,” she said. “One of those memories I would almost like to forget and can’t was a young man, still alert, saying ‘Please, please don’t let me die.’ He was bleeding out right in front of us, and we couldn’t stop it. That’s one of those memories that sticks out and doesn’t want to go away.

“One day they brought some body bags in, and the sergeants wouldn’t let me go back to deal with them. An officer had to go back but they would not let us go back. They said, ‘These bodies have been in the water for several days and you don’t need to see this.’ I don’t think it was a lack of respect for our abilities, but a desire to protect us.”

From the ER, Phyllis transferred first to the intensive care unit, then the medical ward, finally ending up on the Vietnamese ward. She especially liked that ward, where she worked with a lot of children and local women. Many of them were injured in the war, some from what we refer to today as “collateral damage,” but she didn’t dwell on that.

“I didn’t even, at that point, ask how they got those injuries, they just came to us for help and we helped them.”

“But I wasn’t conscious of being at risk,” she added. “Now one of our doctors came in from six months out in the field, every time hear it he’d hit that wall and be down. And we kind of laughed at first but he said ‘That was incoming.’ We asked him how he could tell and he said ‘You can tell.’ Well we couldn’t, the nurses couldn’t.”

Phyllis says she was issued a soldier’s full kit, except for a weapon.

“I had everything but the actual .45, which was what they were giving nurses at the time. That’s another story because in Basic they had us fire the .45. Of course the .45 has a pretty good kickback. So I fire it and the sergeant says ‘Okay, you’re done’ and I said ‘Wait a minute, I didn’t hit anything. What is this for?’ He said: ‘Familiarization, so you know what it is.’ I said, ‘Yeah, but that won’t do me any good.’ And he said, ‘Lieutenant, if the enemy gets close enough to you to fire that thing, throw it.’”

Phyllis also reflected on how she avoided PTSD.

“I never felt threatened, but I’m the kind of person I take my life one day at a time and really don’t often dwell too much on what might happen down the road. I think that might have something to do with how I came out of Vietnam. Also my very strong belief that in spite of everything we do to each other there is a God. Yes, he allows horrible things to happen, but I still believe He’s there.

Phyllis knows first-hand that not all veterans are so lucky.

“My younger brother served as a Navy helicopter crew chief in Vietnam. He was shot down a couple of times and came back with severe Post Traumatic Stress Disorder. One nurse was in the ER when her fiancé was brought in nearly dead. My own daughter got engaged in Afghanistan, and her fiancé’s helicopter had a hard landing and he was hospitalized with a concussion. Something like that is life changing and very traumatic. I didn’t have those kinds of things. I have memories that hurt, people that didn’t make it, children who didn’t make it. But I don’t have nightmares.”

Phyllis stayed in the Army and served until retiring as a lieutenant colonel in the late 1980s.

“I don’t regret going,” she said, reflecting on her time in Vietnam. “I would have gone again if we’d been there long enough. That’s what I was, I was an Army Nurse.”

Phyllis Cogan (nee Breen) was a nurse during the Vietnam War.