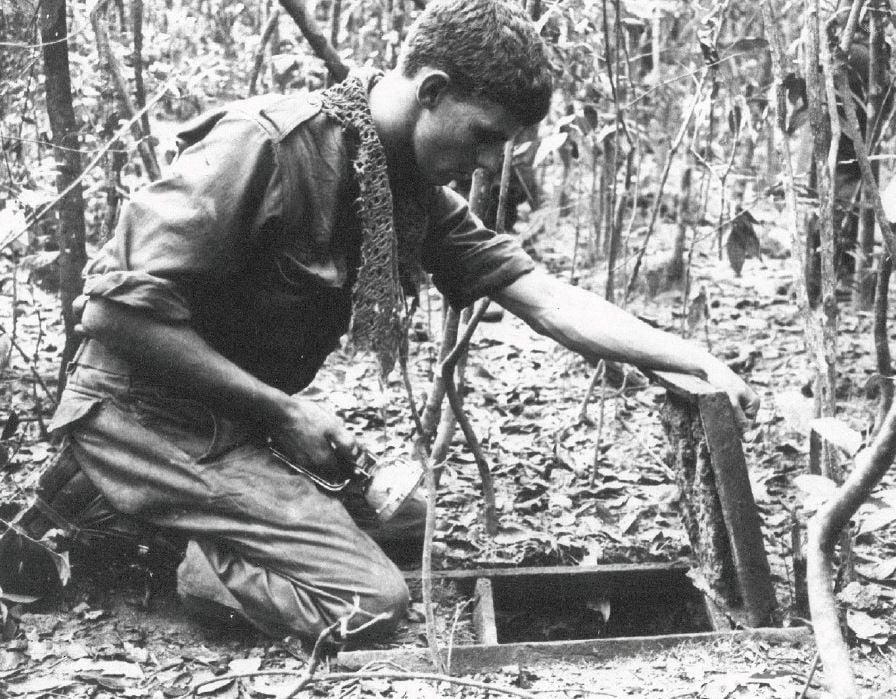 An Australian soldier looks at a tunnel vent during the Vietnam War.

Niven Baird joined the Army in 1952 and served two tours in Vietnam, first as an adviser in the 3rd Corps area around Saigon in 1964, then as executive officer of the 1/5 Mech attached to 3rd Marines up near the DMZ. What follows are a few of the many highlights of those tours.

Baird said he missed the Korean War and so had volunteered to go to Vietnam. He worked to learn the language with the aim to be an adviser.

“It was just a tremendously good course,” he said. “I felt so sorry for the young soldiers who came over later and had never any contact, never any knowledge of what the Vietnamese people were like. They just missed an awful lot.”

Baird go to Vietnam on April 18, 1964, and his second night there, the Viet Cong put a mine on a cargo ship anchored where he was billeted and blew it up, causing a giant explosion.

“That was my introduction to Vietnam,” he said.

Baird was assigned to be the senior adviser for the Vietnamese Army’s 1st Armored Calvary Squadron, staying around Saigon as an anti-coup defensive unit.

“We ran operations all over basically that area north and west and east of Saigon, through what’s called, along the Cambodian border, and the lower part of what was called the Iron Triangle. It was mostly operations among the rice paddies, but some of the area was taken up by the Hobo Jungle: triple canopy and bamboo thickets. We would send one cav troop here, one cav troop there, and so on. When we made contact, the APCs gave us a mobility advantage, so we were very successful in keeping hard corps units down that were coming in through what later to became known as the Parrots Beak, we didn’t call it that, off the Ho Chi Minh Trail.

“Sometimes we would go along inside the Hobo Jungle with the troop, and there’d be a shot and some young soldier sitting on the last track would get killed or wounded. We’d go back and check it out and here we’d find a spider hole. Some guy popped up, shot, and popped back down. We didn’t go in, we didn’t have time, we just dropped a grenade in and were gone. It wasn’t until much later we found out that this whole area, all the way across to Cu Chi, was a solid maze of tunnels.”

Baird was older than many of the soldiers in Vietnam and recalled issues with trying to reel in young soldiers who were both angry and frightened.

“But later, some Americans got over there they didn’t have that experience, so things like My Lai occurred. We made sure that didn’t occur. When you get shot at the commander puts out the call on the radio and tells them ‘Nobody move.’ But, as I said, that’s a matter of experience. You just know you can’t allow a tragedy like that to occur, of shooting up a hamlet.”

Baird also helped train some of the Vietnamese Ranger units.

On one of the training missions, he remembered, “We went into a big clearing in the jungle, 50-60 acres. We got two thirds of the way into this huge opening, and the Viet Cong had moved in an anti-tank battalion, hard-core, and set up in a huge horseshoe. They had nine recoilless rifles and a lot of .51 caliber machine guns, and they opened fire from the flanks. Hit two tracks immediately, they started burning. We tried to get around them, had no luck doing that, so we pulled the Rangers to go back because they’re just getting eaten alive. We kept attacking that afternoon, trying to break through. And in the end we left seven tracks in the middle of that field burning.

“The Viet Cong, it was a hard-core battalion, they specifically had been trained for this purpose. They withdrew. We came back in, licked our wounds that night, got our wounded out. Went back the next morning and they were gone. Our tracks were still there. We saw what their fighting holes looked like. I’d never seen a fighting hole like that before.

“They didn’t have a foxhole like we had, they’d dig a long, about 4-foot long trench about 2 feet wide, put the dirt in front, and two guys would be in there and one would shoot from the right side of the dirt, and one from the left side of the dirt, and the dirt would take care of the impact of the bullets coming in. Then they had a grenade sump under there, and they could get down and crawl under the dirt when the artillery started coming in, so you couldn’t get them. Very well done, very well trained.”

Later in his tour Baird was ordered to take a team to open Highway 13, which had been closed by the Viet Cong, so that commerce could get through. The VC would tear up the road at night, ARVN would make repairs by day, but the VC would tear it up again the next night.

“It was interesting, perhaps the most challenging thing I’ve ever done in my life ... We’d leave at about 0130 in the morning, in the dark, get into the jungle, and hole up somewhere until light. Then we’d move around, diamond formation, until we found a path, then set up an ambush. Sometimes it worked, sometimes it didn’t. I learned that the Viet Cong, when you did something different, they did not react immediately. They would stop what they were doing, back off, and watch and see what was going on, and learn how to deal with this new whatever it is. They never organized a large operation against us. The road stayed open from late August until mid-December, when I got pulled out to do another operation, and I guess that operation just fell apart. Too bad, because that was the way to fight that war.”

Baird’s second tour lead him up north, which he thought was ironic. “I knew every inch of the 3rd Corps area. I think I’d set a foot in every foot in all of 3rd Corps, so of course I got sent up to the DMZ. I was the (executive officer) of the 1st Brigade, 5th Mech, attached to the Marine Division. We were reinforcing the 3rd Marine Division.”

Among his many experiences on his second tour, one poignant moment stands out as an appropriate conclusion to this series. This incident occurred at a firebase near the DMZ, within sight of North Vietnam.

“I came in one morning after being out a couple of days, and I was filthy, covered in red mud. I was told to report to my helipad to meet someone with a call sign I didn’t know. My sergeant major and I stood around the helipad a while, and here came this big navy blue helicopter. ‘What in the world?’ On the side was a blue plate with four silver stars on it. ‘Holy mackerel, a Navy admiral, a full admiral!’ The door open and a guy came bounding out. ‘Hi, I’m Jack McCain!’ We shook hands and I said: ‘Sir, I apologize for looking like this.’ He said: ‘Son, don’t you ever apologize to me for looking like a soldier.’ So we walked around and talked about what we did there. He said, ‘I notice you can get on top of that building there.’ ‘Yes, Sir, that’s my TOC.’ ‘Can we get up there?’ ‘Yes, Sir.’ So we get up there and I give him some binoculars, and as he’s looking north he said ‘This is the closest I’ve been to my son in two years.’ John McCain, of course, was a prisoner during that period.

“The admiral said he wanted to talk to my men. ‘Sir, most of them are asleep, except those that are on duty.’ ‘Well, I want to talk to them.’ So my sergeant major went around got them up and gathered around the hootches, most of them half-dressed. Admiral McCain went around and shook hands with every single soldier. Everyone, not just the commanders, every soldier, and told everybody how much he appreciated what they were doing. I thought that was the mark of a real gentleman. Then he got into his helicopter and went off.”

The Sentinel salutes local Vietnam War veterans and participants with a year-long series of stories that was published every Saturday in History. Today's feature marks the end of the series that started on last year's Veterans Day.

Called “Voices of Service,” the weekly feature examined how the war shaped officers and enlisted personnel from every branch of the military in every phase of U.S. involvement in Vietnam.

The Army Heritage Center Foundation provided half the content for this series in keeping with its mission of “Telling the Army Story ... One Soldier at a Time.”

An Australian soldier looks at a tunnel vent during the Vietnam War.