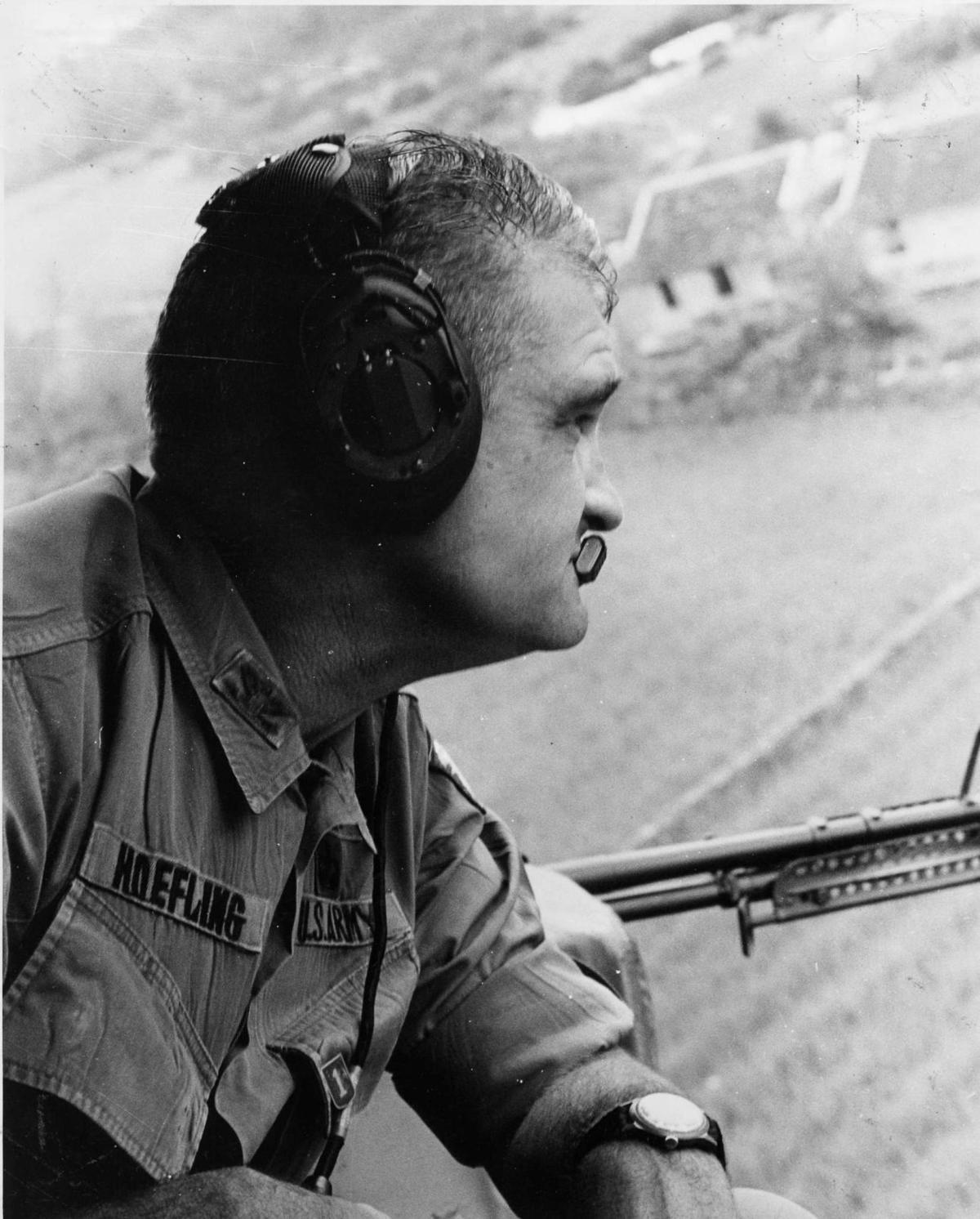 Pictured is then Col. John A. Hoefling during the Vietnam War. Hoefling was often in a command helicopter ordering soldiers where to go. 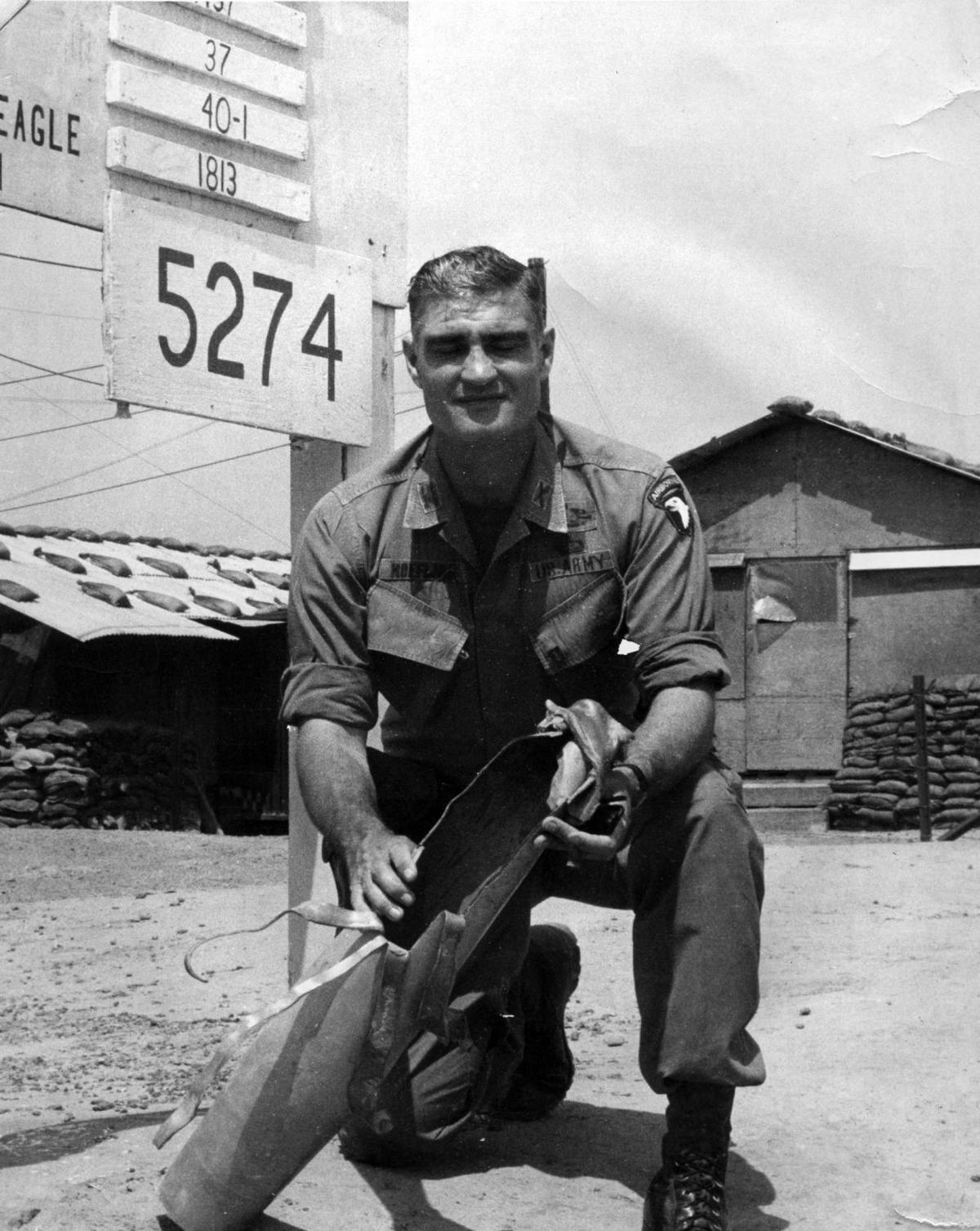 Then Col. John A. Hoefling is pictured during the Vietnam War.

They were the epitome of the American soldier in action – support troops with limited combat training and experience pressed into service to man the perimeter defenses.

Their mission that day in Vietnam was to hold the line and save the base camp by letting loose enough firepower to confuse and unnerve the enemy.

The situation had looked grim only a short time before as Col. John Hoefling peered down from his command helicopter at the hostile force closing in on the ground.

It was spring 1969 and the Milwaukee native was in command of the second brigade of the 101st Airborne Division in Vietnam. Hoefling was tasked with leading an assault up the A Shau Valley, the main route for enemy troops to move supplies into the South.

“I went back to check on the base camp ... We left people behind,” recalled Hoefling, 91, now a retired major general living in Monroe Township.

On landing, Hoefling entered the compound and announced, “I want to see the senior man on this base.”

“That would be me, colonel,” answered an officer who was shaving. Hoefling alerted the man to the approaching threat and ordered every available soldier to man the defenses.

Cooks in white hats and aprons emerged from the mess hall while company clerks, more skilled at desk jobs than firing a rifle, also answered the call. But the most stirring memory for Hoefling was the medics who carried the wounded on their backs to the foxholes

This show of strength by those least skilled or able to fight offered just enough resistance to turn the enemy away. It created a false impression the base camp was heavily defended.

Guerrillas in the plains

A West Point graduate and decorated Korean War veteran, Hoefling arrived in Vietnam in June 1968 and would spend the next year in heavy combat. The early months of his tour saw the use of combat battalions in daily air assaults against targets on the plains around the city of Hue and LZ Sally.

Typically Hoefling was in a helicopter flying above the operation where he could direct his field commanders and help them call in airstrikes and artillery support. The main enemy on the plains was Viet Cong guerrillas who Hoefling called terrorists comparable to ISIS.

One day a guerrilla fighter got off a lucky burst with his AK-47 and shredded the tail rotor off the command helicopter. Though this forced a crash landing, Hoefling and his crew were rescued by another helicopter. Later he was on a helicopter that crashed after losing power.

Hoefling was lucky neither craft caught fire, even though the design had a reputation for going up in flames. “Ours never burned,” he said. “I think it was divine intervention.”

NVA in the valley

While Viet Cong fought from ambush under the cover of darkness, North Vietnamese Army regulars would dig in and fight to the last man. The NVA had tunnels so deep in the A Shau Valley they could survive numerous strikes by B-52 bombers, which hit the supply route almost constantly.

A deeply cratered dirt road ran down the middle of the valley that was flanked by jungle on the hillsides. The second brigade went in with the 101st Airborne Division to cut the supply route, destroy enemy base camps and uncover buried weapon caches.

The operation started with the establishment of fire bases on the hillsides to provide artillery support to friendly forces advancing in the valley. The first step was for aircraft to release daisy cutter bombs designed to clear away swaths of jungle growth.

Large flying crane helicopters were then brought in to haul bulldozers to further clear the debris field, allowing combat engineers to build the fire bases. “The main brigade was airlifted by helicopter in one day – an awesome event,” Hoefling said. “Once in the valley the second brigade engaged in numerous battles.”

As with operations in the plains, Hoefling directed each battle from a command helicopter. There he made good use of Army heavy artillery and Air Force timed delay fused bombs that would go underground before exploding, killing the enemy in their bunkers. Once he even called in support from a battleship offshore that hauled a shell the weight of a car onto a NVA position in the valley.

Attached to his command was a platoon of military dogs trained to sniff out underground caches of weapons and equipment. While hovering over the valley one day in April 1969, Hoefling received a radio message “White Owl, you’ve got to see this.” Named for a brand of cigars, White Owl was his call sign as the brigade commander.

By the time his helicopter landed, the dog platoon and combat engineers had unearthed a massive find that included 832 new rifles. It was the largest cache found in the valley during that campaign.

The Battle of Vinh Loc

Hoefling is best known for the battle at Vinh Loc in Oct. 1968, which he planned and executed. Reported in detail in the March 1968 issue of Army Magazine, this battle used a classic soft cordon, in which the enemy were taken by surprise and surrounded on all sides before ground troops closed in to sweep the battlefield.

“In a soft cordon, little or no artillery and aerial bombs are used to avoid hitting civilians in the surrounded area,” said L. James Binder, who wrote the magazine article. Binder added the plans used troops for the 101st Airborne Division along with soldiers from a South Vietnamese division along with Popular and Regional Forces companies.

Navy Swift boats and South Vietnamese patrol craft blockaded Vinh Loc island, which is located off the coast of Hue and was being used by the Viet Cong as a recuperation and training base. “In effect, the cordon was to consist of two long lines of troops facing each other since the island is only three miles across at its widest point,” Binder said.

“Operation Vinh Loc was highly successful in one sense because of the speed, surprise and thoroughness with which it was carried out,” Binder wrote. “Hit hard on all sides before they knew what was happening and denied escape by the tight cordon, the enemy quickly became disorganized and unable to commit himself to any one course of action.”

It was during the Battle of Vinh Loc that Hoefling earned a Silver Star for valor. As the command helicopter was flying overhead, the crew spotted a group of Viet Cong guerrillas. The helicopter landed and a firefight ensued during which Hoefling made good use of a revolver.

After a year in combat, Hoefling was rotated to the United States in June 1969. He retired from the Army in 1976 and went to work as a consultant in Saudi Arabia to train its national guard.

Pictured is then Col. John A. Hoefling during the Vietnam War. Hoefling was often in a command helicopter ordering soldiers where to go.

Then Col. John A. Hoefling is pictured during the Vietnam War.