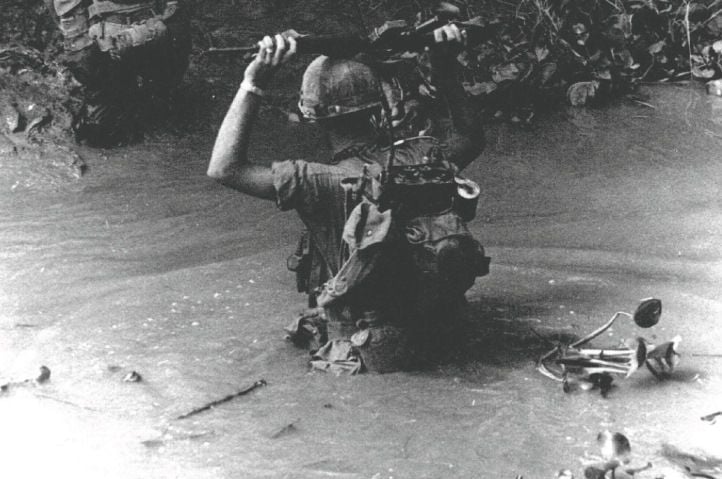 This soldier on patrol in the Cam Son are with Bravo Company, 3-47th Infantry, 9th Infantry Division, is carrying a PRC-25 radio similar to the radio Larry Foote carried in the field in Vietnam. 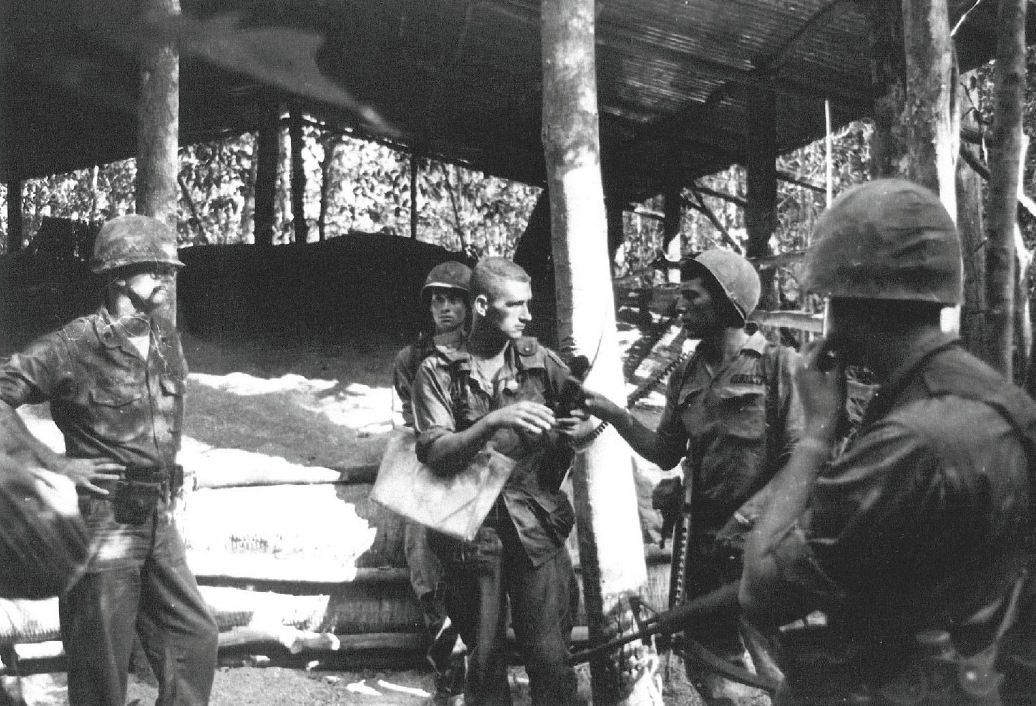 Pictured are soldiers with a captured cache of rice. Larry recounted the plight of villagers caught between Viet Cong forces who demanded they hide weapons and supplies and the U.S. forces who had to try to distinguish between friend or foe.

As a student at HACC in 1967, Larry Foote was well aware of the looming possibility of the draft.

“A lot of friends were getting drafted or losing their deferments. There was a recruiting station right next to campus, and a lot of my friends were enlisting for the Navy reserves. I stayed in school, but it just wasn’t as much fun with my buddies gone. And I thought ‘We’ll, it’s just a matter of time before I get drafted,’ so on March 14, 1967 I enlisted in the Army for three years.”

After Basic Training at Fort Benning, Georgia, Larry was trained for communications equipment operations and repair. His first assignment was with the 8th Infantry Division in Germany. “I liked the Army. I went to the NCO Academy and jump school (parachute training) in Germany.”

After about a year in Germany Larry received orders for Vietnam. He was able to spend Christmas at home with his parents before shipping out. “I came home for Christmas every year the three years I was in the Army, oddly enough. It just worked out that way with my assignments that I was able to be home on leave. I was pretty fortunate.

“There was always the thought that maybe you wouldn’t come back alive,” he said about how he felt going to Vietnam. “But I always felt that if you were going to spend three years in the Army, and I asked for it, I enlisted, that I probably wouldn’t have felt right if I hadn’t gone. At the time I felt it was my duty as a soldier. That’s what we trained for. It really didn’t bother me as much as it did my mother. I didn’t tell her I was going to Vietnam until the night before I left, she thought I was going back to Germany. I didn’t want to mess up her Christmas. I told my father as soon as I got home. But he was a World War II infantryman, so he understood, but my mother was a different story.”

Larry arrived in Vietnam in early January and was sent to Dong Ba Thin. He soon learned that Vietnam was different from Germany.

“I flew in to Long Bihn. We could hear mortar rounds out on the perimeter, but Long Bihn was such a big post they had Infantry guys out there, so you didn’t have to worry about it if you were in the interior. It was pretty well fortified. I went by C-123 (cargo plane) to Cam Rahn Bay, then to my base camp by helicopter. The dropped me off by this engineering unit, outside the wire from my compound. They said a Jeep or truck would be around to pick me up. And I don’t have a weapon yet, just my duffle back, out in the middle of nowhere, and it’s starting to get dark, and I’m starting to get nervous. I could hear mortar rounds and small arms fire in the distance, and the darker it gets the more nervous I get. Finally I saw headlights coming and that was a relief.”

“My main job was working in a communications center,” Larry said. “That was our link with the outside world: a bunker surrounded by sandbags because we were getting mortared all the time. We were a helicopter unit so the VC was always trying to destroy the helicopters. Mortar rounds most of the time, sometimes rockets, and a few ground attacks that were pretty easy to fend off. The bunker could take a direct hit from a mortar. We could see where the rounds hit on the packed dirt roads and you’d really only see a dimple. The area around was sprayed with shrapnel though. Those sandbags on the bunker roof could take a beating. The only problem was you couldn’t see what was going on outside, so you opened the door and you didn’t know what you would find.”

One difference from Germany was in his duties.

“When I was in Germany I had a job and that was it. In Vietnam you filled in wherever you needed to fill in, and it could be something completely different from what you were used to doing. If there was a shortage of door-gunners, well you would do that. And of course when we’d get hit, everyone is an infantryman all of a sudden. You’d go out to the perimeter. You waited until the mortars stopped, then you put on your flak jacket, steel pot, grab your weapon and get out there because then the ground attack would follow.

“I was a sergeant, so I’d get assigned as Sergeant of the Guard. I’d have to supervise to test fire the machine guns and make sure the claymore mines were set up properly and have everything ready to go because once the sun went down ... between midnight and 2 o’clock is when you’re going to get hit. The idea was to try keep them from coming through the wire once the mortar rounds stopped. Most of the time they wanted to get our helicopters, but sometimes they were after personnel. You could tell which from where the mortar rounds were landing.

“A typical day was in the bunker sending and receiving communications. We got mortared a lot so we’d lose guys, so I’d be working 12 hours on, 12 off. I didn’t get much sleep while I was there.”

Sometimes his assignments took him outside the perimeter. “There was a Pathfinder unit nearby, they’d go out and set up landing zones, and sometimes they’d need a radio operator. So I’d go out with them.”

In the field, Larry had the opportunity to observe the effect of the war on the local population. He saw first-hand how hard it was to tell who was who.

“A lot of Vietnamese, it wasn’t their fault. The VC would go into a village and either the people would cooperate or they’d just start cutting hands off. If they found out the people were giving information to the Americans they’d come back the next day and kill everyone in the village. They didn’t think anything of it. Those poor villagers, they either had to give them rice or let them hide their weapons in the village or they’d get killed. It wasn’t their fault. Some of them were VC, but we didn’t know who was who. I didn’t trust anybody.”

Sometimes the danger came from within.

“We had a fragging incident. There were some drugs. We called them heads, the guys who smoked. This guy by the name of Willie Sutton had been busted, so he set two claymores up, trying to kill the company commander and the first sergeant. He set one off in the wrong place and killed a warrant officer who had a wife and two kids. The other mine missed the first sergeant because he had moved where he kept his bunk, but hit the sergeant major in the legs and wounded him pretty badly. They grabbed Sutton right away. He got a court martial for murder and went to Fort Leveanworth. I recently found out he was the last Vietnam fragger released from prison.

“I have a complete transcript of the trial. That dummy used me as a character witness. I have no idea why. I thought he was a crook and a thief.”

The trial almost kept Larry in Vietnam past the scheduled end of his tour.

“I was getting out of the Army and his court martial was coming up and they said ‘We’re going to have to extend you here in Vietnam.’ I said I’m not just going home I’m getting out of the Army. So they said maybe we can just do a deposition. I thought that was great. So I went to Nah Trang to the deposition, and right from the start I said ‘I couldn’t really care less if you take this guy out back and shoot him right now, ‘cause he’s just a worthless piece of crap.’ That’s when the prosecutor said to the defense attorney ‘If you don’t want to use him I will.’”

Sutton was convicted, sent to Leavenworth, and released in 1999 after having done additional time for a parole violation.

Larry returned to the United States and got out of the Army. The first thing he did was sleep.

Larry describes what it is like for someone with his experience to observe the wars in Iraq and Afghanistan. “When I was over there I was thinking ‘Man these people there are sitting back in their easy chair, they’re watching the news saying ‘That’s terrible’ when they had no idea. Now I’m one of those guys watching Iraq and Afghanistan from my easy chair. It sort of makes you feel guilty, knowing what those guys are going through, and I’m the guy in the easy chair.”

Even today, Larry carries the weight of the things he saw and the friends he lost. “That’s why so many of us came back with issues: you just can’t get it out of your mind. It just seems like last week. But that’s the price you pay.”

This soldier on patrol in the Cam Son are with Bravo Company, 3-47th Infantry, 9th Infantry Division, is carrying a PRC-25 radio similar to the radio Larry Foote carried in the field in Vietnam.

Pictured are soldiers with a captured cache of rice. Larry recounted the plight of villagers caught between Viet Cong forces who demanded they hide weapons and supplies and the U.S. forces who had to try to distinguish between friend or foe.