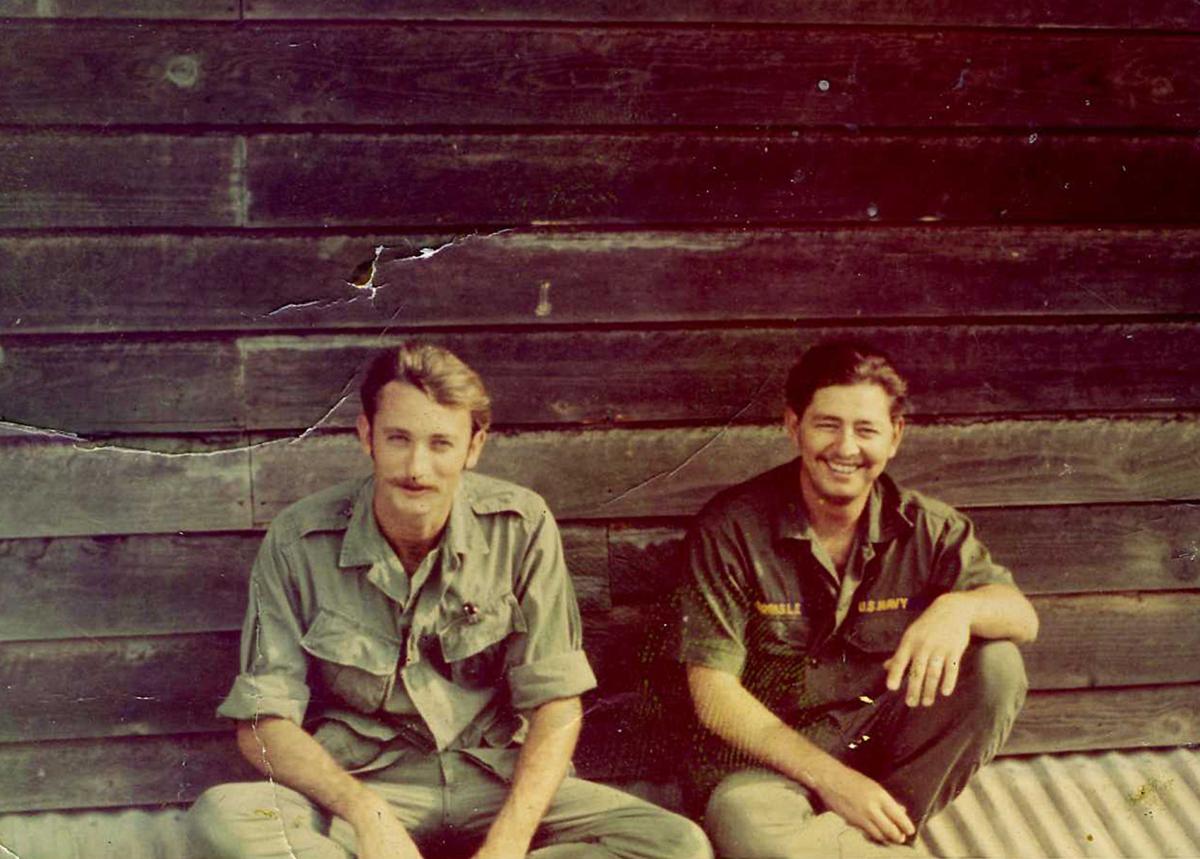 Les Morris, right, poses for a photograph with a friend.

When Les Morris was 19, the exciting part of flight operations was landing a plane on an aircraft carrier.

“It was more fun than it was dangerous,” the Carlisle native said, recalling the missions he flew off the USS Hornet in the Gulf of Tonkin during the Vietnam War.

Today, the 67-year-old Boiling Springs man has a better appreciation for the hazards of bringing a multi-ton aircraft to a sudden halt within a short stretch of flight deck.

“When you think about it, it is dangerous trying to hit a cable just a couple inches around,” Morris said. “It’s a hell of a landing in the middle of the sea with the ship pitching and yawing. It’s not a steady platform.”

But when Morris was 19, he felt invincible and lived for the moment while admiring the men at the controls of the aircraft. “The pilots who landed those planes, they were very well taught,” Morris said. “They had some expertise.”

But even skill could not save the crew of one C-2 Greyhound – a plane designed to carry supplies, equipment and critical personnel between carriers and shore bases in the warzone.

Morris remembered one day on the Hornet when a generator broke free from its moorings in the cargo bay of a Greyhound shortly after take-off from the catapult.

The loose generator flew back into the rear of the aircraft causing it to stall in midair just as it was trying to gain altitude. There was no time for the pilot to recover and the Greyhound crashed into the water.

“At that speed, the plane just disintegrated,” Morris said. “The four guys on board all died instantly.”

Morris was a crewman onboard an S-2 Tracker, a sub hunter and patrol aircraft. His job was to operate the radar along with the magnetic anomaly detector used to pinpoint the location of submarines. On an attack run, it was Morris who released the anti-submarine warfare ordnance.

He would fly six-hour missions day or night scouting the ocean around the carrier task force looking out for any sign of hostile submarines. Most times Morris felt he was not in any kind of jeopardy.

One mission became deadly serious when a Russian-made MIG achieved a fire control lock-on on their Tracker. That meant the fighter plane was getting ready to shoot an air-to-air missile at Morris and his crew.

“The only thing you can do is get down close to the water where there was too much sea return for their radar to work,” he said. The ploy worked and Tracker escaped unharmed.

The MIG was the only hostile Morris remembered. The majority of the missions were routine. U.S. submarines did not operate in the Gulf of Tonkin at the time of his deployment in mid-summer 1967 to late 1969.

There was an exception. One time the crew participated in a training exercise where a Navy boat pretended to be the enemy with the goal of eluding the planes and ships of the task force.

Morris and his crew were not only able to locate the boat, but also score a victory on it in a simulated attack run. “We killed a submarine and the four of us received a bottle of liquor ... How good was that?” Morris said.

On a typical mission, Morris sat behind the pilot and just focused on doing his job, which also involved operating electronic support measures that detect, record and identify enemy radar emissions.

In late January 1970, Morris was transferred to Japan and assigned to VRC-50, a fleet transport squadron that flew C-2 Greyhounds. There he served in the aircraft maintenance department and was tasked with keeping updated records on plane parts.

His job was important because air-time and wear and tear determined when a part was removed from an aircraft for repair, replacement or a rebuild. Since Morris had experience in how to launch and land aircraft, he also drew duty shifts helping pilots check the flaps and ailerons prior to take-off and taxi aircraft to a parking place on the apron.

For a period of several months in 1970, Morris was assigned to a detachment of VRC-50 that became part of the 3rd Marine Air Wing at Da Nang.

“We had ration cards that allowed us to buy booze,” he added. The men of his detachment pooled their resources behind one guy who was in charge of setting up the club barroom on the second floor of one of the barracks.

The club manager used ration cards to pay some Navy Seabees to construct the barroom. Once the club was open, the detachment had access to cold beer at 15 cents per can in military scrip.

Even with the temptation, the men exercised moderation. They had no choice. The club operated with the permission of their commanding officer. One misstep or case of drunken revelry would shut down this morale boost.

“I don’t’ recall guys staggering out of the place,” said Morris, who left the service in late February 1971. He was an E3 airman during his time in the Navy.

Les Morris, right, poses for a photograph with a friend.