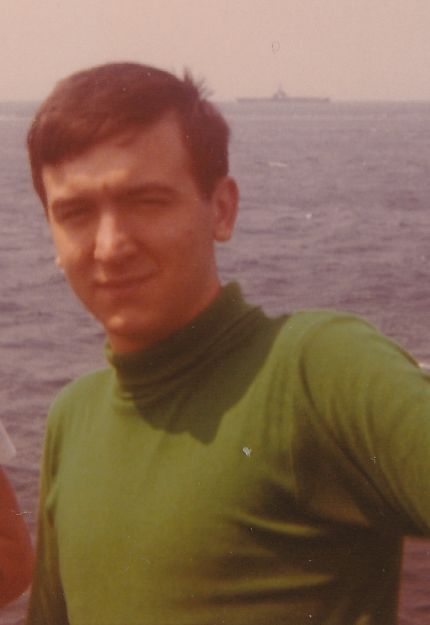 Gary Stackhouse poses for a photograph on the USS Coral Sea in the early 1970s.

With so much going on, it was easy to get hurt on the flight deck of the USS Coral Sea.

Gary Stackhouse was lucky that most of his time on the aircraft carrier was spent below in the hangar fixing up A-6 Intruder attack planes flying missions over Vietnam.

But every so often the York county native was ordered topside to brave flight operations to make a quick repair to an air mask or some other piece of safety or survival equipment.

“The pilots had all kinds of problems when they were going through their checks,” recalled Stackhouse, who recently retired as a security guard stationed at Carlisle Barracks.

Standard gear for a crewman on the flight deck was a helmet fitted with front and back plates to protect the head from injury. “I ran into a lot of wings and stabilizers,” the former Marine said.

He added how ear muffs were attached to the skull cap to shield the ears from the noise of warplanes taking off and landing. There were also goggles to keep out flying debris kicked up by the violence of machines in motion.

Crossing the deck, Stackhouse had to be mindful that every step could carry him closer to an afterburner, a jet intake or spinning turboprop. He wore an inflatable life vest in the event a near disaster knocked him off the ship into the ocean below.

“You could get a heat blast and the next thing you know you’re on your (butt),” said Stackhouse, now a resident of York Springs, Adams County.

From August 1971 to August 1972, he was a lance corporal assigned to Marine attack squadron VMA-224. The carrier Coral Sea was in a task force patrolling Yankee Station in the Gulf of Tonkin. Its mission was to launch air strikes against enemy targets.

It was not unusual for him to work 12 hours a day, seven days a week, when flight operations were in full swing. “The more you fly those things, the more they break,” Stackhouse said.

Every so often, he was ordered to board a helicopter for a flight to Da Nang to repair a plane that could not return to the carrier. “They would send in somebody from every work center,” he recalled.

While he specialized in ejection seats and safety and survival equipment, there were other specialists on the helicopter trained in the repair and upkeep of avionics, engines and airframes.

“Da Nang was hot,” Stackhouse recalled. “The jungle heat was ... killer. We went to fix the aircraft, get it done and get out of there.”

Other times he was tasked with the repair of aircraft damaged in battle. Most times this took the form of holes in the fuselage and tail section from ground fire. “We had 20 aircraft,” Stackhouse said. “We came back with 15 of them. The other five were shot down.”

The near-constant flight operations made the resupply of bombs, rockets and other ordnance vitally important. Underway replenishment was also used to feed a crew that numbered in the thousands.

“It was ongoing ... constant,” Stackhouse recalled. “One night food ... several nights later ammunition ... The Navy had it locked down.”

Typically helicopters airlifted cargo pallets from supply ships to the carrier flight deck. The pallets were lowered onto the massive elevators that carried aircraft between decks. The cargo was taken below to the hangar deck.

There Stackhouse waited with other crewmen equipped with forklifts and power jacks to break down each pallet into manageable loads that were taken to other parts of the massive carrier.

“Food went one way ... Ammunition went another,” he recalled. “It was manual labor.” By the time one load was ready, another pallet was waiting when Stackhouse returned to the flight deck. “It started all over again.”

Food onboard the ship was pretty good with two mess hall lines offering a daily schedule of meals, he said. A snack food line near the stern served up hot dogs and hamburgers virtually around-the-clock. While convenient, the limited menu options got old real quick.

Crewmen spent their off hours playing cards, watching movies on the hangar deck or visiting the crowded gym or library. When flight operations were suspended, the flight deck was clear for crewmen to head topside to relax, sunbathe or run laps.

Sleep onboard the carrier was a challenge at first with all the noise from the ship engines, flight operations and crewmen milling around at all hours of the day.

The U.S. Navy was not alone in the Gulf of Tonkin. All too often, the carrier task force was shadowed by Soviet aircraft off in the distance and by spy trawlers “fishing” for information, Stackhouse said. “The other ships kept an eye on those guys.”

Stackhouse would go on to spend 22 years in the Marine Corps, retiring in 1992 as a gunnery sergeant. Since 2001, he worked as a security guard at Carlisle Barracks assigned primarily to Root Hall and Collins Hall on post and to the U.S. Army Heritage and Education Center.

Gary Stackhouse poses for a photograph on the USS Coral Sea in the early 1970s.