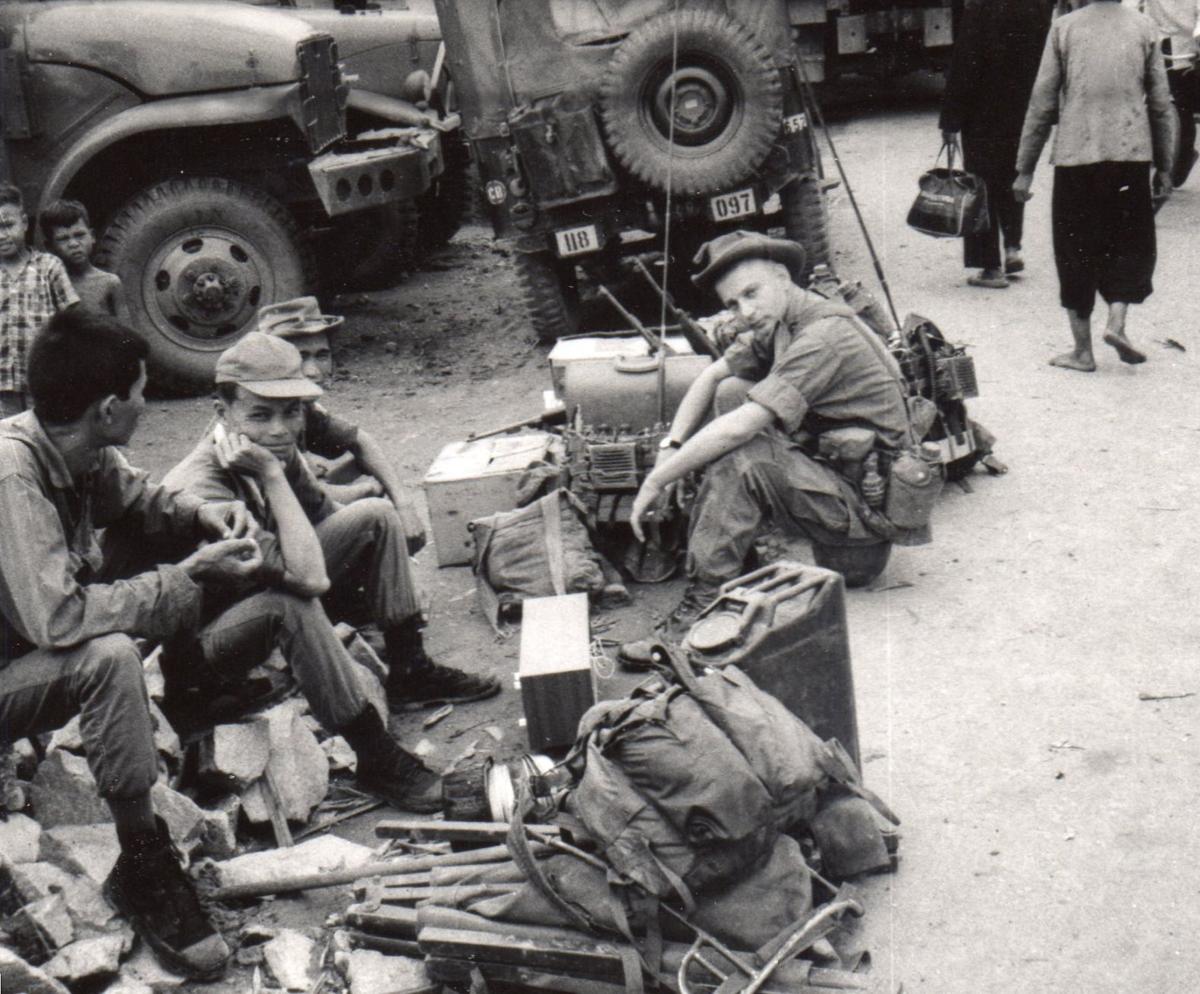 Don Boose sits with several of his Vietnamese aides, their gear and the Jeep in which they traveled. 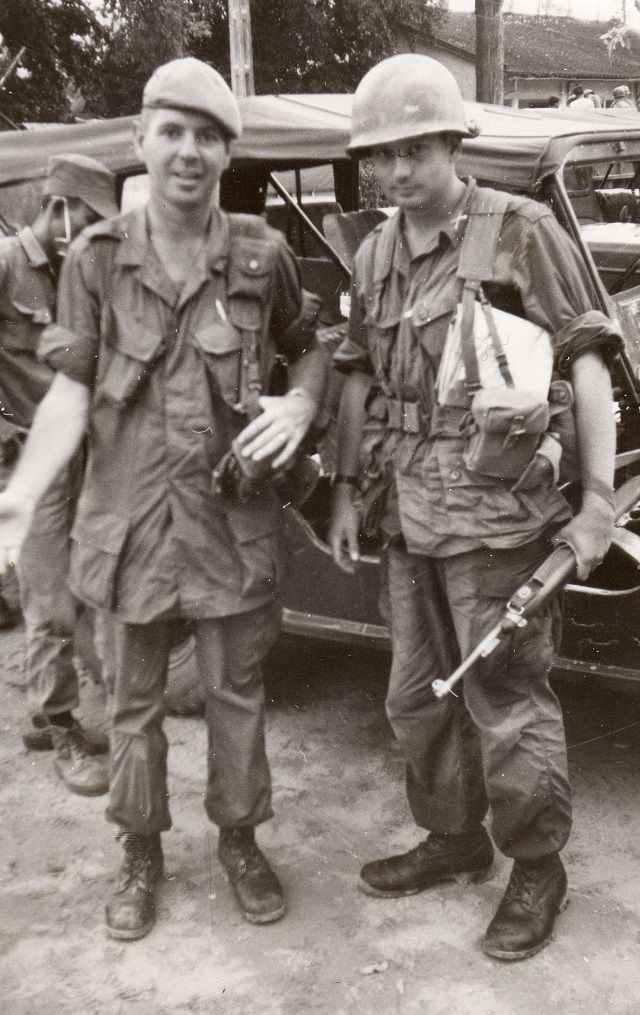 Don Boose received his commission as an Infantry officer in the Regular Army in 1962. After his initial post in Korea, he was assigned to a training company at Fort Gordon, Georgia, providing Advanced Infantry Training and preparing troops to go to Vietnam.

“They all knew for sure that they were going to Vietnam," he said. "Not only that, they knew they were going to be replacements for Airborne units. We had soldiers who had been enlisted, and we had some who were drafted and turned out to have a real aptitude for soldiering and enjoyed it.

"But we had a lot of guys who were not all that enthusiastic about going to an Infantry unit in Vietnam," he added. "There were some discipline problems, not widespread, but some. This was the '60s, but it was the pre-Tet '60s. So demonstrations had begun, but it wasn’t until I came back that they became so intense and the anti-war sentiment became so strong. Before I went, it was just getting started.”

In 1966, word came down that he would be going to Vietnam as a military adviser. Surprisingly, Don did not receive extensive training for the job.

“This was the time of the big buildup in Vietnam," he said. "U.S. units were being sent to Vietnam, and the Army wanted to leaven those units with experienced Infantry captains. So they took 50 advisers who were in Vietnam and had experience as advisers and transferred them into those units. They took 50 random captains in the U.S. and said ‘You guys are going to be advisers.’ Now the Army had an adviser course at Fort Bragg along with six months of Vietnamese language training.

"We had one week in a compound in Saigon. At the end of the week I was flown down to the Delta and plunked into the middle of a Vietnamese Infantry battalion. We were in Vinh Binh Province, between two branches of the Mekong Delta.”

Don was assigned as an adviser with the 1st Battalion, 9th Regiment, 9th Division of the Army of the Republic of Vietnam (ARVN). “1st Battalion had the best commander and the best reputation. I had two absolutely crackerjack sergeants, both Korean War vets, Baker and Martin.

"I was issued a .45 calibre pistol, two clips of ammunition, an M-1 Carbine, two banana clips, a paper sack of ammunition, and the regular web gear and steel pot and stuff like that. The Vietnamese troops had old World War II weapons and equipment.

“Down in the Delta the intensity was nothing like it was up north, this was nothing like the Ia Drang Valley. We were conducting counter-insurgency, so we were trying to avoid a lot of collateral damage. So I recorded a lot of helicopter 'assaults,' which, with one exception, means we went in in helicopters. The door-gunners did not prep the landing zone with machine gun fire, we were trying to avoid excess casualties. They might fire back if they took fire, which they often did. They would land, troops would get off, form up, move into the treeline, maybe not a shot was fired. Frequently there would be a couple of shots fired, but whether it was a one of our soldiers with an itchy trigger or a sniper in the treeline, we couldn’t tell.

“Most of the casulaties over the course of the next year were mines or snipers. Onesies or twosies, a steady dribble. The two exceptions where when the battalion was guarding a bridge that had been blown up - we were hit hard and took heavy casualties - and Easter Sunday.”

Don laughed when asked about his role as an adviser.

“Our battalion commander, Major Thành, was very experienced. He had been a lieutenant in the French Army fighting in Vietnam when I was in junior high school, so I didn’t have a lot of military advice to give him about running his battalion. Occasionally there were things Major Thành and I could talk about, he didn’t ignore me completely. But the main thing was I had a radio and could get gunships and medical evacuation helicopters – dustoff – so I was valuable to him as a liaison officer who could bring in the fire support that wasn’t available to him. I could also direct close air support.”

That ability was critical during the Battle of Easter Sunday.

“We carried carbines for personal protection, and we also (did) on rare but important occasions for directing close air support. We had two clips, I think Baker and Martin had a few more. Thirty rounds in each clip. One was ball ammunition in case you ever had some target to shoot at, I never did. The other was full of red tracer bullets. On Easter Sunday, when we found out that the VC were in front of the treeline rather than in it like we thought, Baker and I got up on the rice paddy and fired our carbines at their position, and then the gunship came in and fired on them.

“On Easter Sunday, 1967, a Vietnamese unit went on a sweep and clear operation and ran into trouble. They got hit by the VC and barely got out. The next day they sent in another unit, and they ran into a buzz saw. They ended up with a U.S. helicopter down, and the U.S. adviser, Tom Mitchel, was killed trying to get to the crew.

“They sent in a dustoff ship, which was normal, except on this operation instead of a motley collection of snipers in the treeline, it was the 306th VC Main Force Battalion with machine guns and a lot of weaponry. The dustoff ship took an RPG (rocket propelled grenade) in the engine compartment and went down. Col. Dempsey, the commander of the 13th Aviation Battalion went down, and he was shot down and killed.

“The ARVN decided they needed some help, so they called for another Vietnamese armored cavalry unit. Those tracks would have gone right through the VC, but they never got there. So they called us. We had no idea, we weren’t on standby, we were on stand-down. I got woken up around dawn by the regimental adviser, Major Gary Riggs, Special Forces. He said ‘Wake up, Boose.’ And honest to God he said, ‘First battalion flies at dawn.’

“We headed out to the airstrip and lined up, no idea what was going one. Major Thành was on leave, so Lt. Xuien was acting battalion commander. He was asking me what was going on, and I’m saying ‘No, you tell me.’ Eventually the helicopters showed up, and as we’re getting in we see that there’s brass (from the machine guns) on the deck. As I mentioned, we didn’t prep the landing zones, so that meant they hit something bad. And I can still see Baker and Martin’s faces as they looked at each other.

“We board the chopper and fly north, and I’m following along on my map. All of a sudden we drop down low below the trees, 25-50 feet above the ground. We cross the rice paddies, pop up, and Martin says ‘Jesus Christ there’s helicopters burning on the ground.’ Black smoke against the treeline and three burning helicopters. We drop down again, and because I haven’t been able to orient myself on the ground I have no idea where we are. So I go up between the pilot and co-pilot and say ‘Can you show me where we are?’ The pilot says ‘Get out of my God damned helicopter we’re taking fire!’ So we jump out, and things go quiet, as they do, except we now hear this continuous rumble.”

After sorting out the confusion about which way to go, 1st Battallion arrives on the battlefield proper.

“We came up out of the treeline and see all the smoke and flame, F-100’s dropping cluster bomb units, and helicopters occasionally. They’re still trying to figure out what to do because they’ve still got guys on the ground. We found a dirt bunker and took shelter behind that. We’re trying to figure out what to do and I remember saying to Baker, ‘You know, at this moment, my little boy is hunting for Easter eggs.’

“The next thing we heard (was) a .50 caliber machine gun. One of our great fears was always that the VC would get a hold of a .50. Turned out that the aviation unit had gone back to their base and put a .50 caliber sideways in one of their helicopters, mounted a smoke generator in another, and come back. With the smoke and the .50 firing they managed to get four birds on the ground and some of their guys out.

“Shortly after that Lt. Xuien started yelling 'We go!' So we all started trotting down to the next paddy dike, and that’s the way we spent the day: one dike at a time. Finally we got to the point where we were about 100 yards from the treeline and we realized that the VC were not in it, they were in front of it. That’s when we fired the tracers. Finally sometime around twilight we got into the trees, and the VC broke contact and left.”

Don finished his tour in Vietnam and returned to the states to resume his military career. He left everything behind except his class A uniform and photographs. As he was leaving, Major Thành gave him one last thing to think about.

“When I left Vietnam, Major Thành, said to me, 'I want you to remember something: this battalion, when you arrived here, only 13 of those soldiers were here. All the rest have been killed or wounded over the course of the last year.'”

Don Boose sits with several of his Vietnamese aides, their gear and the Jeep in which they traveled.